There are a number of nonintuitive technical issues – including interlaced fields, frame rates, frame sizes, pixel aspect ratios, safe image areas, and color spaces – that differentiate video from images destined to be displayed on a computer. You can’t just ignore them; they must be handled properly to ensure your final work appears on television as you intended – otherwise your final image may be mangled (not to mention your relationship with your client). Chapter 41 of CMG5 contains an overview of many of those topic; we’ll share a few gems here. 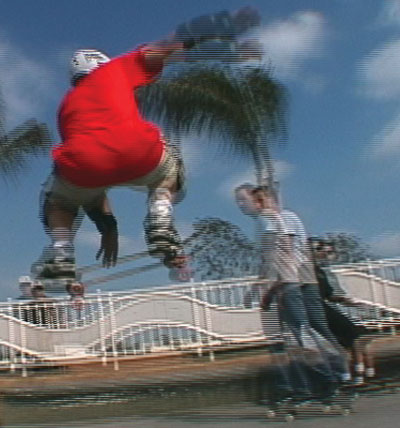 Of course, not all video footage is interlaced. Check to make sure you see the telltale signs of interlacing (such as in the image at right – footage courtesy Creative License) before separating fields. But if you do see interlacing, then in almost all cases you will be better off if you separate those interlaced fields in the After Effects Interpret Footage dialog.

The most common frame rates for video in North America are 23.976 or 29.97 frames per second (fps). Don’t be tempted to round these numbers to 24 or 30 fps: The difference sounds tiny, but it adds up to a frame every 33.3 seconds (or a field every 16.7 seconds), which quickly becomes noticeable. Mismatches in frame rates between 30 and 29.97 can cause audio/video synchronization errors, as well as skipped or repeated images.

If you import footage, and the thumbnail along the top of the Project panel says its frame rate is 29.97 or 23.976, but you still encounter problems with frame being skipped or repeated, you may need to conform the clip’s frame rate to clean up internal timing errors in the file. This used to be a problem with Avid footage in particular. To do so, select the clip in the Project panel, click the Interpret Footage button at the bottom of the Project panel, and type the desired number into the Frame Rate >Conform field.

Pulling Out the Pulldown 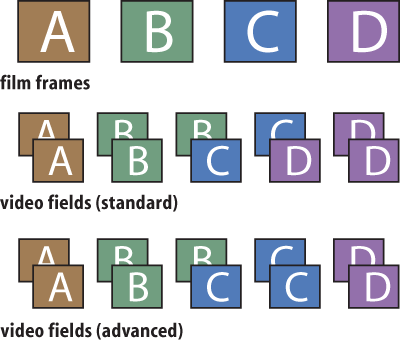 Film usually runs at 24 fps. When film is transferred to NTSC video, it is slowed down by 0.1% to 23.976 fps, and every four frames of film are distributed across five frames (ten fields) of video through a process known as pulldown.

Some video cameras also shoot at this rate and add pulldown to simulate film-like motion. The result is a staggered set of “whole” (progressive) and “split” (interlaced) frames, as pictured at right.

You can treat the result as normal interlaced footage, but it is preferred to remove the pulldown sequence so that you are working with the original source frames inside a composition. In particular, you want to do this before tracking, stabilizing, masking, painting, or rotoscoping the footage.

The frame sizes defined for standard definition video have a quirk: They contain more pixels than are supposed to be used. When engineers designed these formats, they built in a few extra pixels along the edges to allow for artifacts caused by video processing algorithms and the like. The full captured frame is referred to as the Production Aperture; the smaller area inside which refers to the actual image is referred to as the Clean Aperture.

For many years, video hardware and software ignored this difference, using just the Production Aperture size for everything. A side effect of this choice was that they also used very slightly wrong pixel aspect ratios to make the math work – otherwise, the extra pixels in the Production Aperture made it look like the frames were wider than 4:3 or 16:9.

As of After Effects CS4, Adobe decided to rectify this and started using the technically correct pixel aspect ratios. The suggested square pixel sizes on the previous page encompass the entire Production Aperture; that’s why they have image aspect ratios wider than 4:3 or 16:9 (for example, 720 ÷ 534 = 1.348; not the expected 1.333).

What does this mean for you? Less than you might expect: 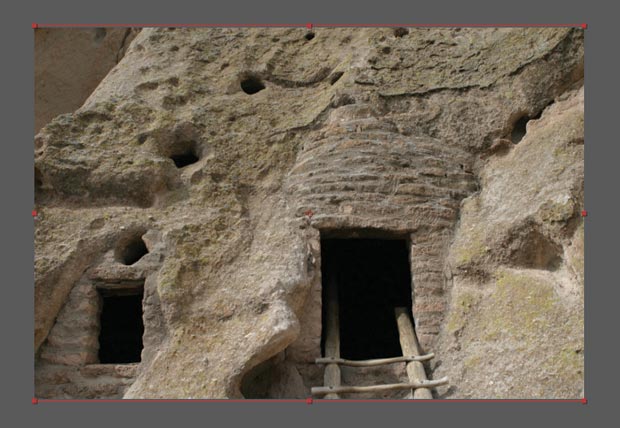 This issue does not affect any of the anamorphic HD formats; in all of their cases, Clean and Production Apertures are the same.

Chris wrote an exhaustive piece on the history of non-square pixels, should be you interested in overwhelming your friends and colleagues on the subject.

Converting Between DV and D1 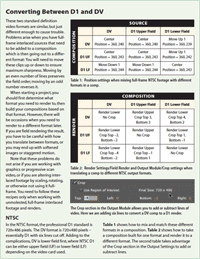 Some incorrectly believe that an NTSC DV frame of 720×480 pixels has a different pixel aspect ratio than an NTSC D1 frame of 720×486 pixels. Actually, they both have the same pixel aspect ratio; DV is just a D1 frame with 6 lines cut off to save on compression when going to tape. (Remember, DV originally intended as a consumer format; not for real video production or broadcast.)

There are times when you need to convert between the two formats. The easiest approaches – scaling one to fit the other’s composition size, or centering one format in a different format’s comp – both happen to be the less-optimal way to do it. On CMG5’s DVD-ROM, we included a one-page bonus chapter on the best way to convert between these formats; you can click here to download that PDF file.