One of the most fun areas to explore in After Effects is using the Puppet tools. These provide a new way to warp layers, including shape and text layers created inside After Effects. Applications include creating character animation or just imparting fun movement to otherwise inanimate objects.

Previously, the best tool in After Effects for character animation was parenting (the subject of Chapter 17). Puppeting takes a different approach. Rather than working with a rigid bone analogy, puppeting is more akin to working with a sheet of rubber. You place pins in this sheet where you want sections to stay put or at points where you want to pull and deform the rubber. All the pixels in-between flex as needed to accommodate your movements. There are optional tools for setting stiffness as well as making sections of a layer pass in front of or behind others.

Chapter 35 of the Creating Motion Graphics provides a quick comparison between the parenting and puppeting approaches, and then goes on to demonstrate each of the Puppet tools as well as share several important tips and gotchas. A few of those are included here.

The Puppet tools differ from conventional effects and other parameters in After Effects in a few significant ways: 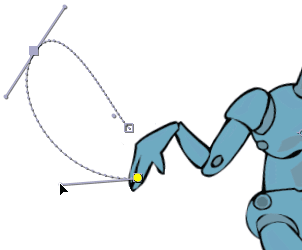 Following on from the last tip above, if you have a busy composition that makes it hard to see the Puppet Pin paths, double-click the layer to open its Layer panel and edit the path there. Remember to set the View popup to Puppet and enable the Render checkbox along the bottom right of the Layer panel to see the Puppet effect.

On the other hand, if your problem is a busy Timeline panel, press SS – Solo Selected – to reveal just the selected pin; twirl it open to reveal its associated parameters. 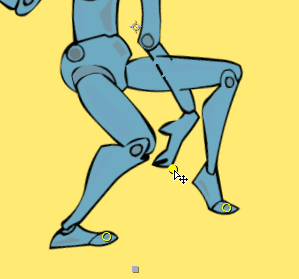 After you apply puppet pins to different limbs, you can drag a pin to cause a limb to overlap another portion of the original image. However, if you don’t do anything else, After Effects can be uncertain as to which warp mesh triangles are supposed to pass in front of or behind the others. For example, note the outlines on the forearm on the image at right: One line is in front of the thigh, while the other is behind.

The Overlap tool is used to define the front/back weighting of a portion of your layer. Each Overlap pin has its own In Front % (weighting), plus an Extent value that determines how far the pin’s influence reaches. Rather than place a large number of Overlap pins to define the area that is supposed to go in front or behind, it is far better to use as few Overlap pins as possible, and then increase their Extent as necessary. Fortunately, Overlap pins can be moved after initial placement to help center their extent region.

The In Front % assigned to an overlap extent is displayed visually by its color: the lighter it is, the more in front it is; the darker it is, the more behind. The two images below show a trio of overlap regions set up with their In Front shading visible (left), and what happens when you then drag the arm to cross over the thigh and shin (right): 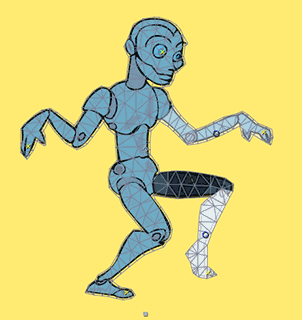 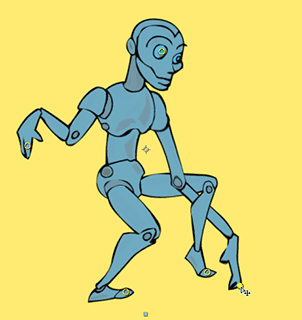 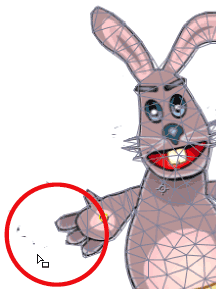 The oft-ignored Mesh Expansion parameter defines how far beyond the alpha channel that the warp mesh triangles should extend. The reason you need to set this value above zero is that unless you have an infinite number of mesh triangles (which would take an infinite amount of time to render), rounded corners may be cut, and you could accidentally slice off part of your original model – such as the bunny’s fingertips at right. 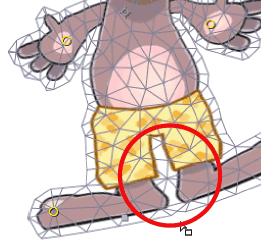 However, the answer isn’t to just blindly increase the Mesh Expansion value. The more you do so, the higher the risk you run of joining together sections of your original layer which you would prefer remain separated so that you could animate them individually. Note in the figure at right how the arms are dangerously close to being stitched to the body, and that legs have been meshed together as one blob – meaning you would not be able to warp and therefore animate them separately.

Our starting point is to set Mesh Expansion to 1.0 and increase the Triangles value until the layer’s alpha is fully enclosed. If the resulting Triangle count is so high that the layer takes too long to render, we then try to balance off increased Mesh Expansion against decreased Triangle count. 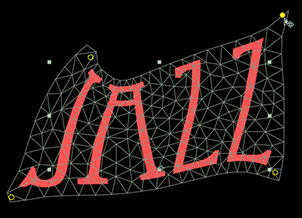 Multiple Shapes in a Mesh

When a layer contains multiple disconnected shapes such as the individual characters of a text layer, if you click inside a shape such as an individual character, you’ll be creating one mesh per shape. However, if you want to deform the entire layer as a unit, first draw a mask that encompasses all of the shapes. Then place a Puppet Deform Pin somewhere inside the mask, but not on one of the shapes. This will create a mesh that fills the mask.

If you want to deform just a portion of a layer rather than the whole thing, you can also use a mask to enclose an area smaller than an entire layer before you create a mesh: Change the Mask group popup to None so that it doesn’t create transparency, or delete the mask after you create the mesh.