Chapter 14 covers creating and animating a camera, including creating camera rigs and taking advantage of auto orientation, as well as showing how to cut between multiple cameras. We conclude by discussing the camera’s parameters in more detail, including how to fake focus and depth of field effects.

This is the second chapter in Part 4 – Cameras! Lights! Action!. The next chapter in this series will cover tips for working with lights.

Before we get into details of using a camera, let’s go over some general issues related to using cameras in After Effects: 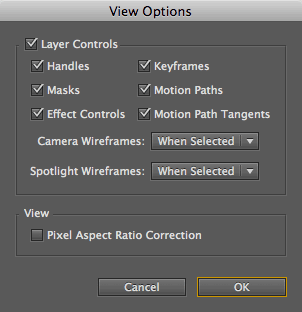 By default, when a camera is not selected, it is represented by a box. When it is selected, you will also see lines that represent its Angle of View and Zoom distance (and if you are using the two-point camera model, its Point of Interest), as well as Focus Distance if Depth of Field is enabled.

If you’d like to always see these extra lines – even when the camera is not selected – then open the View Options in the Comp panel’s Options menu (from the upper right corner). Click on the popup next to Camera Wireframes, and change When Selected (the Default) to On. You can also set this option to Off, if you find them distracting.

You can also set similar options for spotlights (discussed in the next chapter). These options can be set per Comp panel as well as per view; enable Share View Options from the Select View Layout popup to share options across views.

Don’t miss the “3D Views & Shortcuts” section in Hidden Gems for Chapter 13, as it contains tips on how to resize the 3D views so as to maximize the size of the camera icon. This also covered shortcuts to automatically zoom and center your view to see all of the desired layers.

The two-node camera model makes it easy to precisely aim the camera: Just place the Point of Interest where you want to look. However, it can be difficult to coordinate both Position and Point of Interest for some motion paths, such as flying around objects when you need to make multiple turns. So After Effects also gives you the choice to create a one-node model whereby you orient the camera’s body to decide where it is looking.

There are two methods for creating a one-node camera: 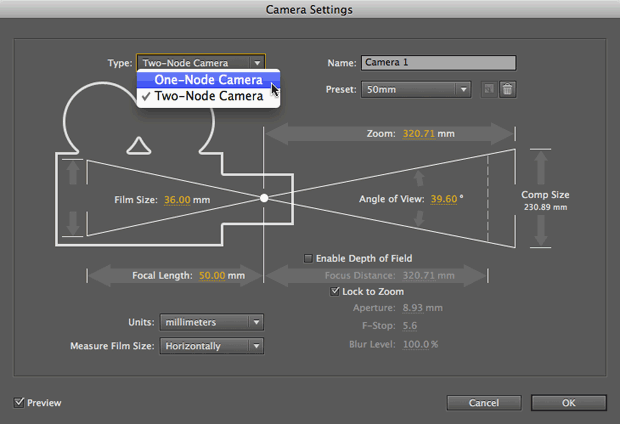 Whichever method you choose, you will need to point the camera using the Orientation and Rotation properties. Note that if you use the Rotate tool to alter Y Rotation or Orientation, there is a nasty glitch that if you go beyond +/-90 degrees, the X and Z values flip by 180 degrees (try it!). That’s why we prefer scrubbing the values directly in the Timeline panel.

When using a one-node camera, the Orbit Camera tool rotates the camera by changing its Orientation values – not Rotation. Whereas Orientation is good for posing a 3D layer, Rotation is far better for animating it in a predictable manner – so keep that in mind.

Another little gem or gotcha (depending on what you’re trying to do): Using the View > Look At menu options and corresponding shortcut keys alters just the camera’s Position, taking into account its current rotation and orientation.

There are a couple of variations on auto-orientation that can be handy when animating a camera moving along a path in a complex 3D world.

First, you can have layers always face the camera so that they don’t appear skewed or distorted. To do this, with the layer selected, choose Layer > Transform > Auto-Orient. When the dialog opens, select Orient Towards Camera and click OK.

Another trick involves having a camera auto-orient along an animation path. It can be hard to set up sweeping motions that don’t appear to drift; this option points the camera for you. With the camera still selected, open its Auto-Orientation dialog, choose Orient Along Path, and click OK. You can also set the middle keyframes for the Camera’s Position property to rove in time (see Chapter 4) so that the speed will be fairly constant. 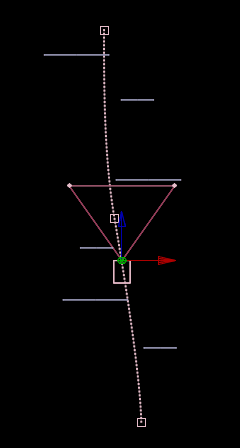 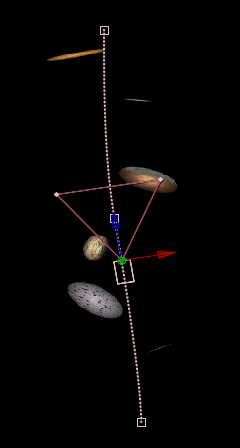 Normally, layers and cameras point where you tell them, which starts out as straight ahead (A). However, you can set layers to orient toward the camera, and also tell the camera to orient itself along its motion path (B).

The one shortcoming of Orient Along Path is that it does not cause a camera or layer to “bank” – rotate along its Z axis – while swooping about. Feel free to manually keyframe a little Z Rotation of your own to anticipate turns.

A little humanization can go a long way to make your movements seem more realistic. To create a handheld or floating “Steadicam” look, add a wiggle expression (Chapter 37) to a camera’s Position or Point of Interest. (For an in-depth discussion on the wiggle expression, see the corresponding installment of Deeper Modes of Expression.)

Editing motion paths and keyframing the result may not be the easiest way to create a smooth camera animation. Many users prefer to create “camera rigs” where individual dimensions of the camera’s movement are divided among a series of null objects. These independent nulls can be used to correspond to a camera’s dolly track and crane movement, for example.

As an alternative to building a camera rig, you can also take advantage of the Graph Editor and Separate XYZ option (mentioned in our Hidden Gems for Chapter 4) to create precise, refined camera movements, such as moving smoothly along an imaginary dolly in the X and Z dimensions, then later doing a crane elevator move in the Y dimension. To use this feature, select the Camera layer, then click the Separate XYZ button at the bottom of the Graph Editor (circled in the figure above).