Do you need to see your video full screen while you edit? Do you have a shoestring budget? Read ahead.

People frequently ask about how to choose and connect a video monitor to their computerized editing system. Some people want to do serious grading and have budget for an HP DreamColor or other high-end device designed specifically for critical evaluation, while others have a shoestring budget and really just want to edit, not do serious grading. I have already dedicated several articles to the DreamColor and its ideal connection. This article is focused on how to pick an inexpensive 1080p monitor for video editing, and the ideal connection. 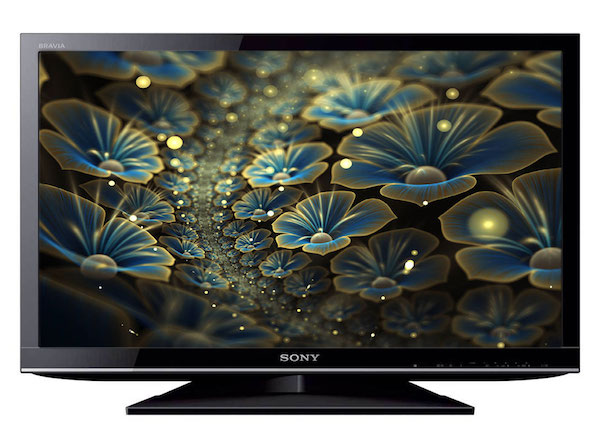 People frequently ask about how to choose and connect a video monitor to their computerized editing system. Some people want to do serious grading and have budget for an HP DreamColor or other high-end device designed specifically for critical evaluation, while others have a shoestring budget and really just want to edit, not do serious grading. I have already dedicated several articles to the DreamColor and its ideal connection. This article is focused on how to pick an inexpensive 1080p monitor for video editing, and the ideal connection.

Especially if you live in the United States, you are better served by purchasing a multi-standard 1080p HDTV to use as a video monitor than a standard, off-the-shelf HDTV set. That’s because unfortunately, based upon my research, most HDTV sets sold in the United States are segregated, meaning that they unfortunately block signals that are 25 for 50 fps to avoid grey marketing. Even if you don’t currently edit projects at 25 or 50 fps, it is silly to invest in a device that prevents you from doing so in the future, especially since no video editing software I have ever seen prevents you from using those framerates, and you can get a good multi-standard HDTV set for a very low price. Imagine getting a call to edit a project in 25 or 50 fps, and having to say: “Sorry, I can’t monitor those framerates on my video monitor”. As the Boy Scouts motto says: Be prepared!

Ignore the compatibility warnings on some websites

Look for one that includes the “true 24p” feature

Not all 1080p HDTV sets include the “true 24p” option. I recommend not only selecting a multi-standard one, but also one that includes “true 24p” so you can see what your editing at the same cadence as your project. All multi-standard HDTV sets I have tested with “true 24p” accept 23.976p, 24p, 25p, and 29.97p even though their published specs don’t mention the non-integer ones. Actually, you’ll probably see it at 47.952p on a 23.976p project (or some higher multiple), but that is fine. You wouldn’t be able to stand the flicker if it showed it at 23.976.

You will find that many multi-standard HDTV sets may not include a manufacturer warranty in the US (or in your country). In some cases, you get a relatively short one from the online store, i.e. 30 or 60 days. At least in the United States, this is easily solved by purchasing an inexpensive extended warranty like those offered by SquareTrade (or similar), either from the same online store where you buy the multi-standard HDTV, directly from SquareTrade, or via Amazon.

Some multi-standard HDTV sets are officially listed for 220 volts, since they were originally marketed for use in countries where that’s the standard AC voltage. However, many of those work fine with 110–115 volts used in the US. The websites I have worked with clients often know the answer and state it there, and they even often include the necessary plug adapter to plug into standard outlets in the US, which are also standard in countries like Canada, Colombia, Costa Rica, Dominican Republic, Guatemala, Honduras, México, Panamá, Puerto Rico, and Venezuela. In Perú, they use the same AC outlet as in the US, but with 220 volts.

The available multi-standard HDTV sets fluctuate frequently, which is why I covered the desired features above, to help you choose based upon specs, not specific models. Often it is possible to check for ratings of the US version of the HDTV set to get a general idea of its performance. Here is an example, but this model may not be available by the time you read this:

The Sony KLV24EX430 24“ Bravia Multi-System LED TV shown above has 1080p native resolution, Sony’s ”24p True Cinema” via the HDMI input, and at publication time of this article costs US$295 in the United States. It is also compatible with 720p.

Why to connect to the monitor via an interface, not directly from HDMI on your computer

I cannot speak from experience with Windows, but Macs unfortunately don’t offer direct video over HDMI output (or Thunderbolt to HDMI) at the most common non-integer framerates used in NTSC and ex-NTSC countries, like 23.976, 29.97 and 59.94. 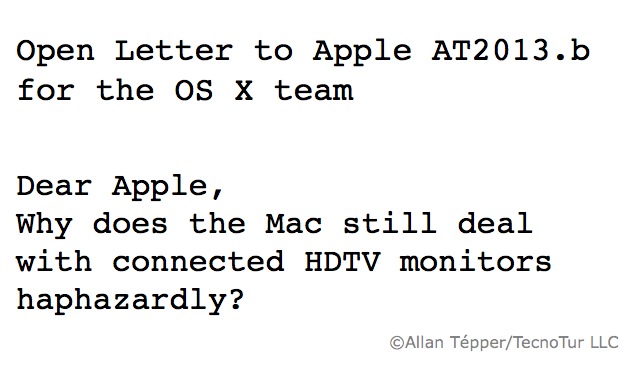 As I covered in my open letter to Apple in 2013 called Why does the Mac still deal with HDTV sets haphazardly? (illustrated above), unfortunately, the Mac (without hacking using a third-party utility) will only deliver exact 24, exact 25, exact 30 and exact 60. Exact 30 and exact 60 have not been standard video framerates since the US colorized the monochrome television system in 1953. As a result, if you edit a project at 23.976, 29.97 or 59.94 (the most common framerates in NTSC and ex NTSC countries) and you have your HDTV connected directly to your Mac as a second monitor, the image will jump every few minutes to catch up. If you only edit projects at exact 24, 25, or 50, then you are exempt from this warning. According to my research, even when you use a third-party utility to add extra framerates to the current list offered by Mac OS X, they still can’t offer 23.976, 29.97 or 59.94, presumably because of hardware issues in the GPU used in Mac. They can only get slightly closer. According to reader Psychilles, the same problem is also present with the Apple TV 3rd version (first with 1080p). Home theater forums are full of people discussing this issue. I even held back this article to test whether if by any chance Apple would fix it with Mac OS X 10.11 (El Capitán), but it didn’t happen. Unfortunately Apple did not add the missing non-integer framerates, nor did they fix the spelling of El Capitán. That is a double shame on Apple.