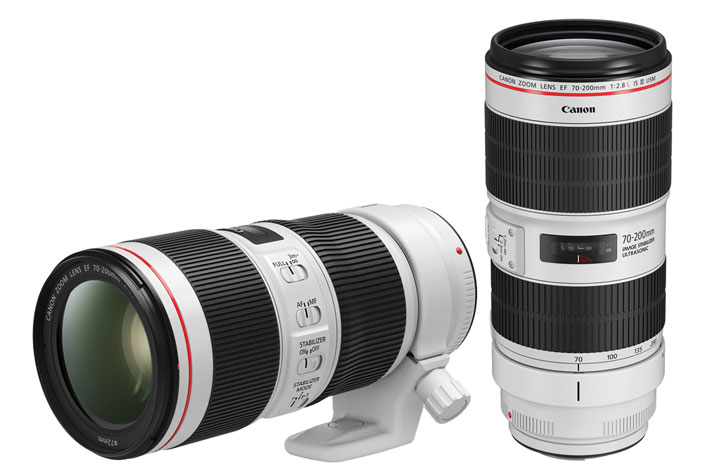 For a couple of months now that today’s news are known, and Canon simply confirms what everybody was already discussing: the introduction of the 70-200mm lenses Canon users love to carry in their bags. With the news we get some extra details not previously known.

Despite some “specialists” suggesting that this is the wrong move, and that other focal lengths should be considered by Canon, the truth is that someone at Canon must know the numbers, and so decided it was time to update the venerable 70-200mm models, both of which have been pivotal for photographers in different areas, to new versions, which keep with the high standards of its predecessors, but introduce some of the most recent technologies applied to lenses.

The 70-200mm lens, in both versions, has been instrumental for professional, semi-professional and photography enthusiasts for many years, thanks to the ability to easily change image composition by switching from standard to telephoto. This adaptability means both lenses can capture a wide range of subjects, from portraits to wildlife, reaffirming the important role the 70-200mm lens plays in a photographer’s kit bag. 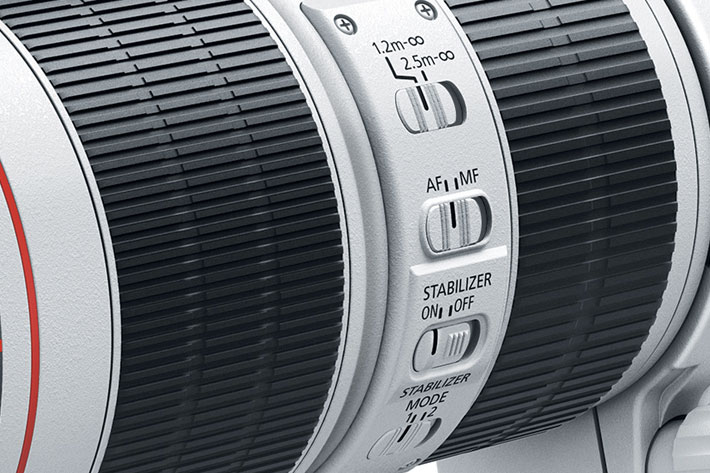 A bit of history

The first EF 70-200mm f/2.8L USM (non IS) was introduced in 1995, as a replacement to the EF-80-200mm f/2.8L, which was the reference for professionals. Introduced in 1999, the original EF 70-200mm f/4L USM offered photographers not wanting to pay the price and carry the weight of the original  EF 70-200mm f/2.8L USM an alternative that grew in importance as digital sensors became common, and ISO could be risen to values above what emulsions offered. The continued development of sensors has transformed the EF 70-200mm f/4L USM, in its different versions, in a viable option for anyone who wants the quality of Canon’s L-series in a more affordable – and less heavy – package.

Three or five stops IS?

So, what’s new and supports Canon’s introduction of these lenses, when so many say the versions now available are excellent? Was there any real reason to introduce new models, or is this simply a marketing decision? I believe different people will have different answers to those questions, but what is known by now does suggest the new lenses are designed to perform better – isn’t that the goal, after all? – and will appeal to photographers who want/need to renew their equipment, or any new Canon user wanting to upgrade to L-series lenses. My own experience suggests that after a few years you’ll want/need to replace your lenses, especially the models you use the most, no matter how careful you are.

I’ve mentioned the Canon’s EF 100-400mm f/4.5-5.6L IS II USM before here – a lens I know well because that’s my main lens for everything from flowers to wildlife or aerobatic displays, and has been, since the first version was launched, in 1999 – and I’ve to mention it again, because, according to Canon one of the new things of the EF 70-200mm f/4L IS II USM is its Image Stabilizer unit, based on the design of Canon’s EF 100-400mm f/4.5-5.6L IS II USM, “which delivers the equivalent effect of a shutter five-stops faster, compared to the previous lens’ three-stops. This is beneficial for any shooting scenario where the camera may be jostled, such as at film premieres, or shooting wildlife on safari.”

One note here: Canon refers to the image stabilization properties of the previous EF 70-200mm f/4L IS USM as three stops, when the previous information available from different sources, Canon included, suggests that it was/is four stops. A footnote in the press-release  distributed indicates that the value was “Measured using the CIPA standard at 200mm”, which suggests that previously Canon used another measurement mode, which gave it an extra stop. Puzzling… even more so, because the new EF 70-200mm f/2.8L IS III USM is also announced as offering “3.5-stop Image Stabilizer” when the previous version of the lens was presented as able to reach 4 stops. Are the new measurement modes, apparently using CIPA standards, reducing the effective IS capabilities, or are they putting an end to marketing excesses? And if so, is the 5-stop IS now announced measured by Canon, or CIPA? 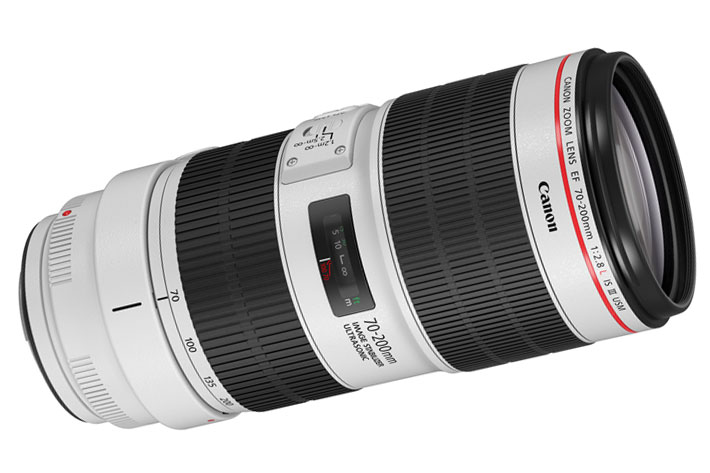 I will leave that controversy to others (it may not be that important, after all), and look, instead at what the new lenses offer to users. According to Canon, feedback from users has shaped the two new lenses. Commenting on the launch of the EF 70-200mm f/4L IS II USM and EF 70-200mm f/2.8L IS III USM, Michael Burnhill, European Product Specialist, Consumer Imaging Group, Canon Europe, said: “Following feedback from our global photography community, we are very proud to be introducing these two lenses. We are committed to delivering the best quality and performance-driven products for today’s visual storytellers to ensure we provide unsurpassable choice for photographers looking to meet their image requirements with confidence. The EF 70-200mm f/4L IS II USM epitomises the very finest in L-series optical technology, whilst being compact in size, robust and lightweight, and the EF 70-200mm f/2.8L IS III USM offers unbeatable performance, versatility and durability.”

Durability is a keyword for the new EF 70-200mm f/2.8L IS III USM, presented as an excellent lens choice for shooting high-quality travel photography. The press-release available, though, is devoid of much more than the usual marketing terms, things like the lens is “built to meet the demands of professionals”, with “protective seals” that make it an obvious choice for challenging conditions, including “moisture and dust”.

The front and rear elements are fluorine-coated, so they are easy to clean, and the lens “has been designed with high-performance and robustness at its heart, ideal for a photographer who requires a high-quality telephoto lens for accurate detail. Built to meet the demands of professionals”. You’ll have to go into the specifications list or a white-paper, which Canon did not make available with the announcement, to know more.

There is no reason to doubt, though, that the new EF 70-200mm f/2.8L IS III USM will be the logical replacement for an older version… but many users will probably not adopt the new version, if they are happy with the performance of the earlier model, what seems to be the case. The fast aperture is one of the reasons to go for such a lens, and Canon points that out, saying that “It enables the photographer to emphasise pin-sharp subjects against a silky smooth, out-of-focus background” and shoot in low light, while noting that the lens’ first-class fluorite and UD optics deliver high contrast and excellent resolution. 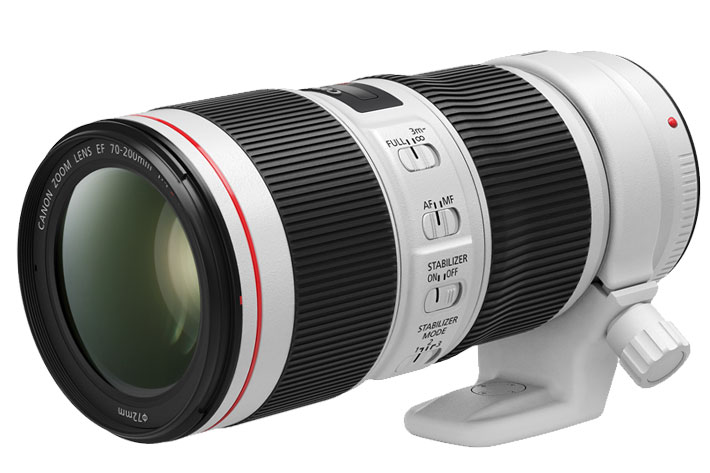 An eight-bladed circular diaphragm, the already mentioned 3.5-stop Image Stabilizer, the ring-type USM motor offering silent AF and outstanding speeds, while still allowing for manual adjustments at any time with a simple twist of the focus ring, make the EF 70-200mm f/2.8L IS III USM, with its tough, weatherproof construction, an exceptional lens for perfectly, and quietly, capturing animals in their natural habitat.

Weight is, no doubt, one of the key reasons to buy the EF 70-200mm f/4L IS II USM. At just 780g against almost 1500g of the f/2.8 version, this is a great option for photographers and videographers on the move. Furthermore, it costs substantially less, being considered the most accessible L-series lens in this segment. As already mentioned, this lens adopts an Image Stabilizer unit similar to the one used in Canon’s EF 100-400mm f/4.5-5.6L IS II USM, giving it an edge in terms of image stabilization.

The nine blades on the EF 70-200mm f/4L IS II USM ‘s circular aperture create a pleasing bokeh effect, blurring the background and helping to accentuate the subject. Interestingly, this aperture has one more blade than the one used EF 70-200mm f/2.8L IS III USM. It would be interesting to see how different the same images will look when shot through the different lenses…

One interesting aspect of the new lens is that it uses a combination of a Ring USM and a new third generation EF engine, which features a new high-performance control CPU and newly developed firmware, to drive greater speed and accuracy in achieving high-speed autofocus. This is Canon taking its AF system to a new level, something we will probably see developing and being used further in the future, both in DSLRs and, I presume, mirrorless bodies. In fact, it may well be something Canon will have for its upcoming mirrorless solutions. “How much faster is this new system?”, that’s what everybody will be asking next. 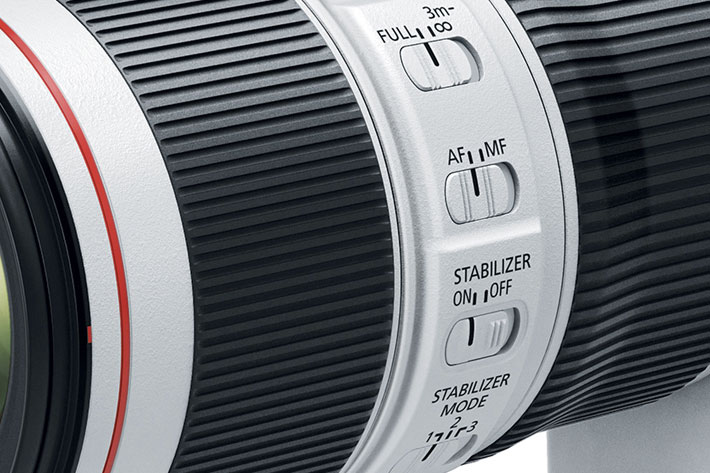 The EF 70-200mm f/4L IS II also offers a close focus distance of 1 meter, compared to the 1.2m on its predecessor. While not as impressive as what Canon did with the EF 100-400mm f/4.5-5.6L IS II USM, where the close focus distance was reduced to half of what the original model offered, it’s an important gain in terms of focusing. This and the fact that you can, at any moment, control AF manually, make the EF 70-200mm f/4L IS II USM perfect for, as Canon says, “unobtrusive and precise shooting, characteristics required to successfully capture street photography.” While I think this white lens is hardly going to be  discreet for street photography, I can think of many other subjects where this lens can be used, and being able to go 20cm closer to my subjects makes me even more curious about what the lens offers.