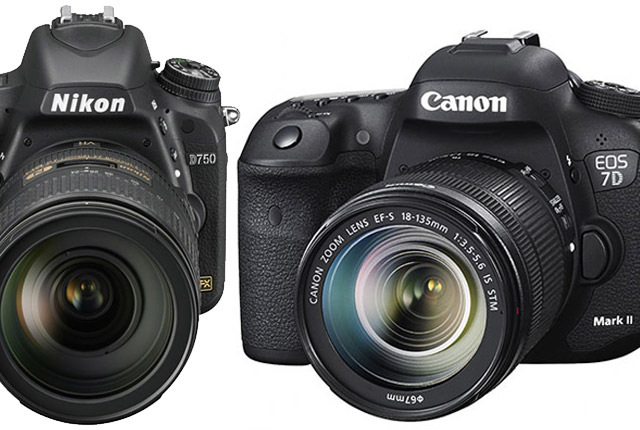 Canons has not officially unveiled their EOS 7D Mark II, but the usual leaks have worked again, and some of the specifications for the camera are already out. Confirmed, it is a APS-C sensor, apparently a 20,2 MP with the Dual Pixel CMOS AF. Nikon, on the other end, goes for a full frame sensor at 24MP on their D750 that follows the path the D810 showed in terms of video.

Both cameras are geared for speed in photographic terms, with Canon EOS 7D Mark II able to reach 10 frames per second, while Nikon goes to 6.5 fps, something that the difference in sensor size fully justifies. The AF system on the Canon is based on a new 65-point AF, with all points cross type, while Nikon goes for a version of the 51-point Multi-CAM 3500FX AF system similar to the one present on the D800/E and D810 but apparently more sensitive in low light, suggesting the D750 can be more reliable than the D810 and D4S. Canon system is close to the one present on the EOS-1D X, meaning Canon has decided to create a “mini EOS-1D X” with the EOS 7D Mark II.

It is interesting to see that Canon continues – if the leaked information is correct – to invest in high-end models in APS-C, while Nikon seems to have left the area, opting for Full Frame sensors on their more sophisticated models. If the near future shows that tendency, then we have a new segmentation in the DSLR market, with Nikon going for FX models when it comes to their top cameras, while Canon seems to play on both the Full Frame and APS-C. It will be interesting to see new developments in this area.

One should also note that Nikon is the one taking the sensor’s pixels count up, with their 36MP models, but the D750 sits at a comfortable 24MP, a number that is probably more than enough, as suggested by Canon, that does not have sensors over 22MP. According to the leaked specs, the new EOS 7D Mark II has a 20.2 million of pixels on the sensor.

Although this is important  information about the cameras, the most interesting elements for PVC are the video specifications. Again, while Canon’s new EOS 7D is still not launched, the data available suggests that it will do 60fps at FullHD, something that will – partially – satisfy all those asking for more speed. That’s almost what is known now about the camera, although it is expected that will keep to the tradition of the original EOS 7D – as I wrote in a previous article –  and offer a revolutionary tool for videographers. 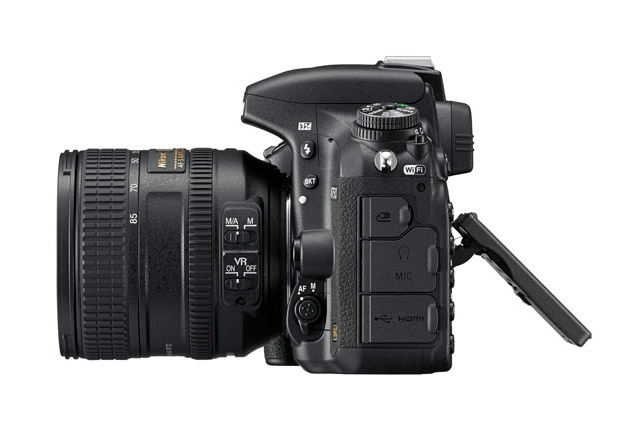 The term “revolutionary” is somehow difficult to use, though, as the general public – and some writers – seem to want to have everything in a single camera, and the first voices of discontentment regarding the Nikon D750 are already screaming all over the Internet, a few hours after the camera was announced. Even the leaked information on the EOS 7D Mark II is being used to say the camera is old days.. What these people, many times, seem to forget is that camera makers have their own path to follow, and can not offer the “unique camera for all” that some think is possible. Examples? I recently came across one article about Canon and Nikon, suggesting they are responsible for the fall of the DSLR market, and one of the suggestions for them to recover was that they used… EVFs. I guess some people do not know the meaning of SLR, and why some photographers prefer optical viewfinders, but that’s a story for another day. Two last notes, though: the DSLR market is not dying, it is stable and follows the market trends, and yes, if it goes down or up, it’s Canon’s and Nikon’s fault, simply because they’re – in practical terms – the only brands that create DSLRs at a regular rate.

This said, let’s look at what the Nikon D750 offers when it comes to video. I believe most of what is true to it will also be true to Canon’s EOS 7D Mark II, simply because it is the logical step to make at this moment in time.

The D750 is Nikon’s first FX-format D-SLR with a tilting Vari-Angle LCD, with robust construction to meet the needs of working in the field. The precision 3.2-inch, 1,229K dot screen tilts to accommodate shooting overhead, at waist level and is ideal for shooting photos or HD video on a tripod. For those serious about using a D-SLR for video, the D750 delivers the same level of functionality found in the Nikon D810, with the maximum amount of manual control that’s essential for production applications.

The D750 features the same level of advanced video functionality as the Nikon D810. The camera can capture video in Full HD 1920×1080 resolution at 60/30/24p and gives videographers and multimedia artists full manual control, including aperture adjustment. Like the D810, the Power Aperture feature provides smooth transitions while adjusting the aperture during recording, and in manual mode, users can control shutter speed and ISO.

The D750’s compact size and affordability will make it a welcome addition to any production environment, as will its FX and DX-format crop modes that make it a snap to adjust the focal range without swapping lenses. Implementing another indispensable feature on-set, footage can be recorded to the dual SD memory card slots, or simultaneously output to an external recorder or monitor via HDMI for a variety of applications. Camera operators will also enjoy features such as headphone and microphone jacks, Zebra stripes to spot overexposed areas, as well as the ability to select frequency ranges for the internal stereo microphone. For time lapse, the camera utilizes Exposure Smoothing, a great feature that creates balanced exposure transitions between frames when using the time lapse or intervalometer feature.

The Nikon D750 is Nikon’s first full frame D-SLR to include built-in Wi-Fi, which enables photographers to both share their images and capture remotely. Using Nikon’s free Wireless Mobile Utility App1, users can connect with their compatible mobile device, such as a smart phone or tablet. For professional photographers and videographers, the camera also has the capability to transmit images over FTP using the WT-5a wireless transceiver plus the UT-1 Communications Unit. With these optional accessories, the camera can be triggered and controls operated in HTTP mode using the web browser of a mobile device. Live view as well as start/stop recording can also be enabled remotely, providing the ability to capture otherwise impossible footage, for example when the camera is mounted on a crane.