The International Guild of Visual Peacemakers: Shooting for Peace! 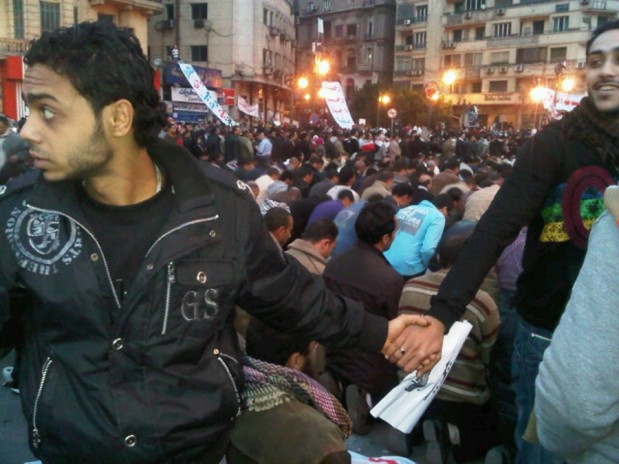 Christians protecting Muslims during their prayers in Tahrir Square. Photo by Nevine Zaki

I have had people come up to me or write to me and say something like, “Wow! Visual Peacemaking – that’s so cool…what is it?” It’s as if there is a ring of truth in the term “visual peacemaking” but they can’t quite see how it might work. I’ve got news for you; I think that’s kinda where many of us are so let me help.

Visual Peacemaking is really quite simple in some ways. One of the best examples of it happened this past week in Egypt. Nevine Zaki (@NevineZaki) tweeted a scene she photographed last Wednesday of Christians protecting Muslims during their prayers in Tahrir Square. It is iconic in many ways and a prime example of what we mean when we say visual peacemaking. She could have let that moment slide and only focus on the brutality everyone else was photographing at that moment. But she didn’t. She chose to show something out of the ordinary and amazing that drew people together rather than kindling more hatred and violence. She showed the world, visual people pursuing peace. For this aspect of visual peacemaking, her image should be its poster child!

But there is more to this than photographing people pursuing peace. There is more subtle, day-to-day imaging that works to the same end. In this type of imaging, the photographer focuses their camera on the both the unique and the similar in cultures with the desire to brake down the unknown, something that people fear.

Years back I used to live in a bi-racial neighborhood–a mix of Hispanics and African Americans. Our neighborhood had the reputation of being scary and tough. It certainly did have its moments. But the longer I lived there, the more familiar I became with my neighbors and the more comfortable I became around them. I learned that they had the same dreams, hopes and even fears. The more the unknown became known, the less fear I had.
The same thing happened when I lived in Kashmir, India. The longer I spent there and the more I learned of the Kashmir culture, Islam, Sufism, food, traditions and even politics the less I was afraid. In fact, the more I learned about these things, the less they were afraid of me as well. Walls fell and trust developed.

A simple photographer like me, who shoots images of culture, life and family, and can make those images evocative and compelling, can do wonders to bring down walls of distrust between cultures, religions and countries. Shooting for peace, as it were, doesn’t mean you can’t shoot provocative shots but it does become a way of looking at life through your lens. You find yourself identifying with your subjects more and asking more questions.

The International Guild of Visual Peacemakers is an organization that is dedicated to both encouraging photographers to use their images for peacemaking and to providing a platform for those images to be seen. It is a new organization, not even a year old. We are still ironing out a lot of bugs flushing out such a lofty concept but it has a future and you could be in it. For more information on The International Guild of Visual Peacemakers visit their website HERE.

On a side note, Matt Powell–an amazing photographer who shoots the humanitarian work of Samaritan’s Purse–and I will be leading a photo workshop in Turkey this May. The workshop is hosted by IGVP. Matt and I will be teaching on these concepts and ideas for each workshop. Of course we will also have group and one-on-one instruction in photography. We will be visiting both Sanliurfa and Trabzon, Turkey, one week at each place. For more information on these workshops, visit my workshop page HERE.