by James Mathers, Cinematographer and President of the Digital Cinema Society 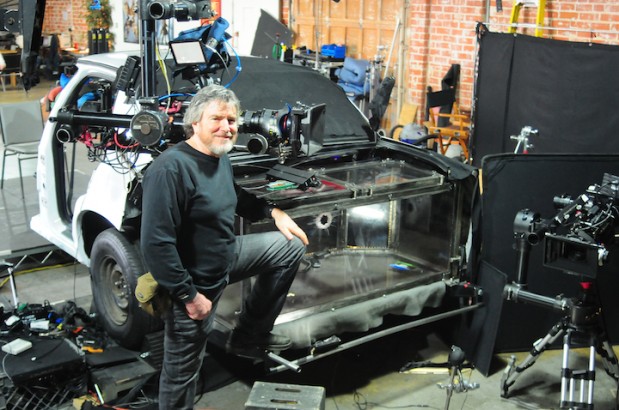 Just like Actors, Cinematographers tend to be type cast, and although I think I’m good at coming up with creative solutions given limited resources, I don’t know what makes Producers think I can shoot a decent feature in only two weeks time. Believe it or not, I get lots of these offers, and by reflex, I’ve learned to turn them down; however, BRAKE was different. I’ve worked with Director, Gabe Torres a lot over the last couple of decades from Episodic to Commercials, and even a Music Video, in the process building a collaborative bond of mutual trust. So when he came to me with a very ambitious feature concept, I was all over it, even though the schedule was only two weeks. 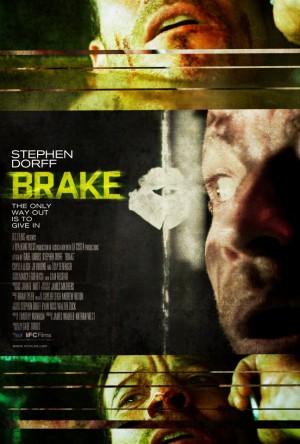 On the face of things, it might seem simple with almost an entire movie set in one small location, the trunk of a car, and a single Actor, in this case Stephen Dorff, (“Somewhere,” “Immortals,” “Public Enemies,” etc.,) who is another old friend of the Director. Although set in a single confined location, this was more like “Die Hard” than “My Dinner With Andre.” The story called for the vehicle to be constantly on the move, which needed to be conveyed via lighting, camera movement, and sound design. Dorff’s character, Secret Service Agent Jeremy Reins wakes up in a black void and only starts to slowly figure out his situation, along with the audience, based largely on these clues.

My job was to provide the visual cues, as for example when we hear the car pull out of the garage, and slivers of stray light start dancing around to illuminate the surroundings as they sneak through every imaginable crevice of the car. This and a bit of subtle camera shake tell us the vehicle is now moving, but it would take a lot more than shaking the camera to keep things from getting too static throughout the course of the story, especially being an “action movie.” In some ways I was blessed to have the plexiglass box that the character was also confined to inside the trunk of the car. Being transparent, it allowed for lots of interesting angles and camera moves, (for which I used my trusty Jib arm.) On the other hand, the great challenge of the box was that it had lots of shiny surfaces at irregular angles causing the potential for innumerable reflections, and constantly shooting two camera coverage doubled this potential. The saving grace was deciding to use a practical LED clock as my Keylight. As the red digits counted down to the next turning point in the story, it added tension to see the many reflections, so they became an attribute instead of a problem. 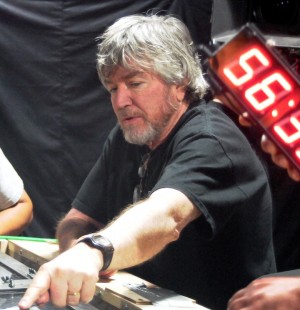 As you might imagine, however, a digital clock doesn’t give off a whole lot of illumination, and I was lucky to have new Digital Cinema camera tools, without which this technique would have been impossible. The RED MX sensor, which I had just had installed shortly before we began BRAKE, allowed me to get a solid image while rating the camera as high as 2000ASA. I had 1×1 Lightpanels moving around outside the trunk so glancing streaks coming through cracks would suggest movement, and I was able to sneak in the occasional LitePad for fill. LitePads, from Rosco, are only about a quarter of an inch thick, so they are easy to hide, and give off a nice “sourceless” fill. They come in a variety of shapes and sizes, such as 12″ and 6″ squares, various small rectangles and a few circles with different diameters topping out at 12.” Practically all of my lights were LED, with the exception of the occasional K5600 HMI Joker when I needed a bit more punch. This allowed me to operate at very low wattages, operating off house power, and never needing a generator. Since LEDs run cool to the touch, it also helped to keep the inside of the box at as comfortable a temperature as possible. Given how we tortured poor Mr. Dorff in so many other ways, (as I’ll explain later,) this was the least we could do. In addition, one scene called for filling the box with liquid, so the ability to easily run LEDs off of DC power as a safety measure was also a help.

Another new technology we found helpful was SSD media which allowed me to sometimes shake the camera quite violently without dropping frames as the old spinning hard drives would have done. The very solid three-way locking system of the Anton Bauer Gold Mount also proved necessary to keep the batteries from flying off as the camera was flung around so indelicately. The way we managed to achieve t he effect of Agent Raines bouncing around inside the trunk was to actually bounce the Actor around inside the box while the camera was hard mounted and moving with the vehicle. And yet the vehicle never actually left the small warehouse that served as our studio. Production Designer John Mott, (“Altas Shrugged,” “The Surrogate,” etc.) and Vehicle Modification Technician Michael Bowser had a simple but elegant solution, chopping the picture car in half and turning it into a virtual rickshaw. With the back wheels locked in place, a team of “Trunk Wranglers,” (their official credit,) leveraged a twelve foot metal post coming out of where the front of the car would have been to slam the Actor around inside the box like a pinball in an arcade game. 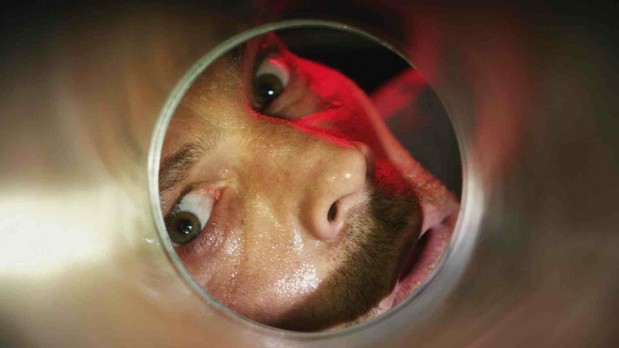 I give Stephen Dorff a lot of credit for even going along with all this, but in fact he was always pushing for more violent movement. The two of us were at odds sometimes, because he actually want ed to be completely sealed inside the box, which wasn’t really necessary to get most of our shots, but created problems when fog would build up on the plexiglass. I only found out later that he suffers from claustrophobia, and this was his way to get into character; you might say extreme method acting. Several of the car’s body panels had the ability to be quickly removed to get our coverage, even the bottom was able to be pulled to get a very unique angle looking up from ground level.

Sound Design also played a critical role in telling this story, so Academy Award winner, Richard Beggs, (“Apocalypse Now,” “Children of Men,” “Lost in Translation,” etc.) was drafted for the task. Since the character can’t see for himself outside the confines of the trunk, the footsteps heard walking around the car, a police siren, or the distinctive roar of a Harley Davidson going by help to inform him about what is unfolding. A first class Surround Sound mix was completed at George Lucas’ Skywalker Sound. Outside of perhaps a Music Video, I don’t think I’ve ever worked on a production where the sound was so critical. Composer Brian Tyler, (“The Expendables,” “Fast and Furious,” “Battle Los Angeles,”) created a stirring soundtrack, which was also essential to keep the roller coaster on track. 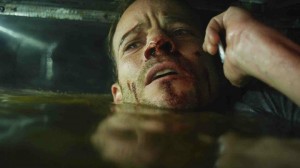 Post Production was the purview of Sam Restivo, who worked not only as the Editor, but also as the Digital Lab, up until the point of DI, which was done at Laser Pacific. We were blessed to have a terrific colorist named Damian McDonnell who had cut his teeth on Peter Jackson’s “Lord of the Rings” trilogy. As far as workflow goes, we would start with our 4K RED R3D files and back them up on the set with the aid of R3D Data Manager. We would then hold a raid protected copy on set, and send another to Sam’s edit room via 1TB shuttle drives, where Sam would start doing his magic. The R3D files were transcoded by Sam overnight to ProRes 4:2:2, and he cut on FCP7. I was impressed to see Sam working with a very large flat screen monitor, (at least 50+ inches,) which was great to help evaluate the footage. It’s a pet peeve of mine, when working on most Indie movies, that we normally never get to see our footage on anything bigger than the small portable field production monitors, which can mask subtle focus or other issues, (in our case reflections were a challenge to look out for.) I always insist on seeing my initial camera tests projected on a big screen at the lab, which they are usually happy to do as a handshake before production, even if they’ll not be consulted again until the DI. In any case, the large monitor in the edit suite was very helpful, and with the use of a RED Rocket card, Sam was easily able to keep up and we could see dailies the next morning as necessary.

From my point of view as a DP, Post went very smoothly, and besides Editor, and Digital Lab, Sam makes an excellent Post Production Supervisor. I think Sam will tell you that he learned from one of the best, Bryan Carroll, who worked Post on such titles as “Titanic” before starting to work as a Producer with Michael Mann, credited as Co-Producer on several of his movies including “Collateral,” “Public Enemies,” and “Miami Vice.” We were lucky to have have his friendly council on BRAKE in matters related to Post.

Of course, it all starts with the script, which in this case was the first produced work of a young writer named Timothy Mannion. Bringing all these many top notch elements together was the job of the Producing team of Nathan West and James Walker working under the auspices of their new company: Walking West Entertainment. This was their first production, but teaming with veteran Producer/Director, Gabe Torres, they didn’t miss a beat, and I’m sure BRAKE will not be their last effort. In fact they are already putting their next feature together with much of the same team, thankfully including myself. 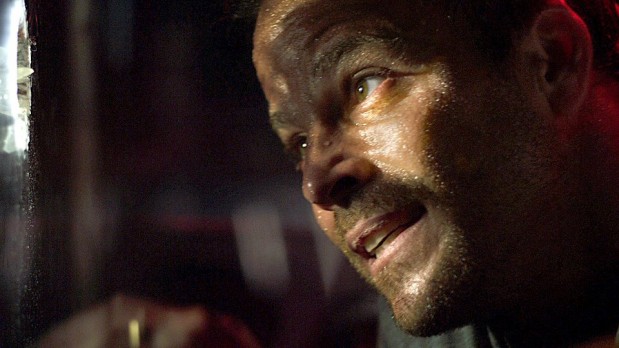 I’m proud of my work and pray that lots of folks get the chance to see it properly projected on a big screen during it’s theatrical release starting March 23rd in New York and Los Angeles. However, in what you might call an experimental distribution pattern, it is actually already available as a VOD download on iTunes, Amazon, and the like. I often compare the feat of a modestly budgeted Spec Indie feature getting any kind of a theatrical release to grabbing the brass ring; for it to be successful is like winning the lottery. For BRAKE, they chose to avoid the popular festival route, and instead, held special screenings for distributors. They wanted to make sure the work was seen in the best light, so it was only shown projected on large screens, (40+ feet), with full Dolby Surround Sound and with a large audience. Based on the strength of those screenings, the movie has been sold into domestic and international theatrical release, as well as home video. So, I guess you could say these guys did win the lottery.

If you would like to see the trailer, you can visit: http://trailers.apple.com/trailers/independent/brake/

A Filmmaker Q&A is scheduled for opening night at the Laemmle NoHo 7 in North Hollywood, CA.

Better yet, if you’ve already had the chance to see this movie, please help spread the good word. The support of the Indie community could go a long way toward making this little movie attain wider distribution, and your positive feedback is greatly appreciated by all the Filmmakers.