Given a cool reception by some on its initial release, some may have wondered if Brainstorm in After Effects was more useful than the now defunct Variations feature in Photoshop. As shown in various tutorials, Brainstorm might be useful to help stir creative juices, even if it can bog down rendering previews of intensive effects, even Radio Waves. 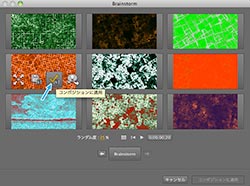 Use Brainstorm to experiment and explore settings in AE Help explains the basics:

“Brainstorm creates multiple temporary variants of your composition and displays them in a grid. You can save any number of these variants, apply one to the current composition, or redo the Brainstorm operation using only the variants that you choose as input.

Brainstorm uses genetic algorithms to mutate and select property values used as input into each Brainstorm operation. You decide which variants to include as input to each generation and how much mutation (randomness) to use.”

Note that you can't use pop-up menu and check properties, but you can use filter or filters, an entire filter or selection of properties in the Timeline (double-click property in Effects Control to open Timeline controls quickly). Also, the Play Button loads RAM preview of the 9 variations, so if you include complex variants in the next Brainstorm, be prepared for some waiting.

Many of the tutorials on Brainstorm use the Fractal Noise effect and perhaps Shape layers, which you might also do if you use Animation Presets as a launching point. Brainstorm was a new feature in AE CS3, and the overview by Aharon Rabinowitz remains as good of an explanation as any. A somewhat more recent tutorial from Angie Taylor and Todd Kopriva is a good example of Brainstorm in actual use.

In addition to general overviews by Daniel Brodesky, Kevin McAuliffe, Richard Harrington, Andrew Devis, and Harry Frank (on lens flares), Motionworks has also considered The Brainstorm Tool in After Effects. Oddly though, the guidelines for Motionworks' often interesting After Effects: Experiment Assignments forbid the use of the Brainstorm Tool! [Update: Brainstorm could be used for discovery, and the chosen comp could be reverse engineered.]

By the way, a few years ago Daniel Bachler proposed Using brainstorm in After Effects to find optimum timewarp settings:

Perhaps Chris and Trish Meyer have had the most to say about taking advantage of this little-used feature to overcome creative blocks or go beyond maligned defaults to get more interesting looks. They've offered several free videos in: