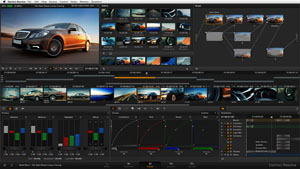 This significant user interface overhaul has been created to harness the power of multiple new technologies added to DaVinci Resolve in the last few years, including automatic 3D eye matching, multi layering timelines, XML support plus more camera and file type support. The new user interface is extremely fast to use and eliminates unnecessary clicks and settings to get working fast. A job can be up and running in three clicks: one to log in, one to drop media into the project and the next to grade.

“This is a major rewrite of the DaVinci Resolve software, and the workflow speed we can now achieve for the whole color correction process is simply stunning,” said Grant Petty, CEO, Blackmagic Design. “DaVinci Resolve has always dominated high end feature film markets, and with this new user interface it will be one of the world’s best looking user experiences. Now customers can focus on their creative work rather than struggling with cumbersome software feature sets. DaVinci Resolve 9 will be great for new users, as it includes user interface elements that are common to other video software. Now it is fast, simple but still just as powerful. Our customers will love it.”