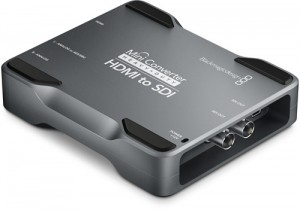 Blackmagic Design’s Mini Converters have more features that are easier to use than found in other converters. A good example of these powerful features is the inclusion of audio on standard 1/4 inch jack connectors, and the audio can be switched between balanced analog or AES/EBU audio. Jack connectors makes it easy to use off the shelf cables and a wide range of audio products. This lets the customers choose between audio on the HDMI connection, as well as independent audio as AES/EBU and balanced analog.

For customers who need an alternative battery powered conversion option for field use, then Blackmagic Design’s HyperDeck Shuttle also operates perfectly as an HDMI to SDI and SDI to HDMI converter all in a single machined metal design. Even if customers are not using the SSD uncompressed recording, the HDMI or SDI input can be connected and then video is output as both HDMI and SDI video. This means HyperDeck Shuttle can be used as two converters in one, all battery operated, with recording of high quality uncompressed video on SSD’s if required! It’s compact size makes it a fantastic alternative for batter powered conversion.

“We designed the Mini Converters to be the perfect solution for monitoring and for converting computer video to SDI, consumer video cameras to SDI and adapting analog devices to modern HD-SDI environments. Today we have thousands of customers who use our Mini Converters for the most critical broadcast work,” said Grant Petty, CEO, Blackmagic Design. “Now, with this new affordable price, our Mini Converters are available to smaller studios on the tightest budgets. Unlike other low cost solutions, with Mini Converters, you get all the professional features such as redundant inputs, re clocked loop SDI out, HDMI, AES/EBU and analog audio all in a compact affordable design!”

All Mini Converters are available now from US$295 from Blackmagic Design resellers worldwide.

Product photos of Mini Converters, and all other Blackmagic Design products, are available at www.blackmagic-design.com/press/images.