One little box can make a world of difference. Add two more small boxes from Blackmagic and one can turn any live streaming video event into a professional tv production usually reserved for much more expensive budgets. Will we soon see the days where facebook live and live video streaming overtake live TV broadcast to living rooms nationwide? With the Blackmagic Web Presenter, Hyperdeck Studio Mini, and ATEM Television Studio HD one can have live TV broadcast quality when web streaming video right now. As for the take-over of Live Broadcast TV… that we will have to wait and see.

This one little box has the potential to have a big impact. This box can replace a computer’s built-in web camera with any SDI or HDMI camera or video source. The Web Presenter converts professional cameras into web cameras for Skype, Facebook Live, Youtube Live, Periscope, Twitch, and Wirecast meaning a user is no longer beholden to a crummy laptop built-in camera and blah picture quality. This was the number one item I wanted to test outside of cameras from Blackmagic Design. I used it for Facebook Lives, Youtube Live, and a fantastic Skype intervi 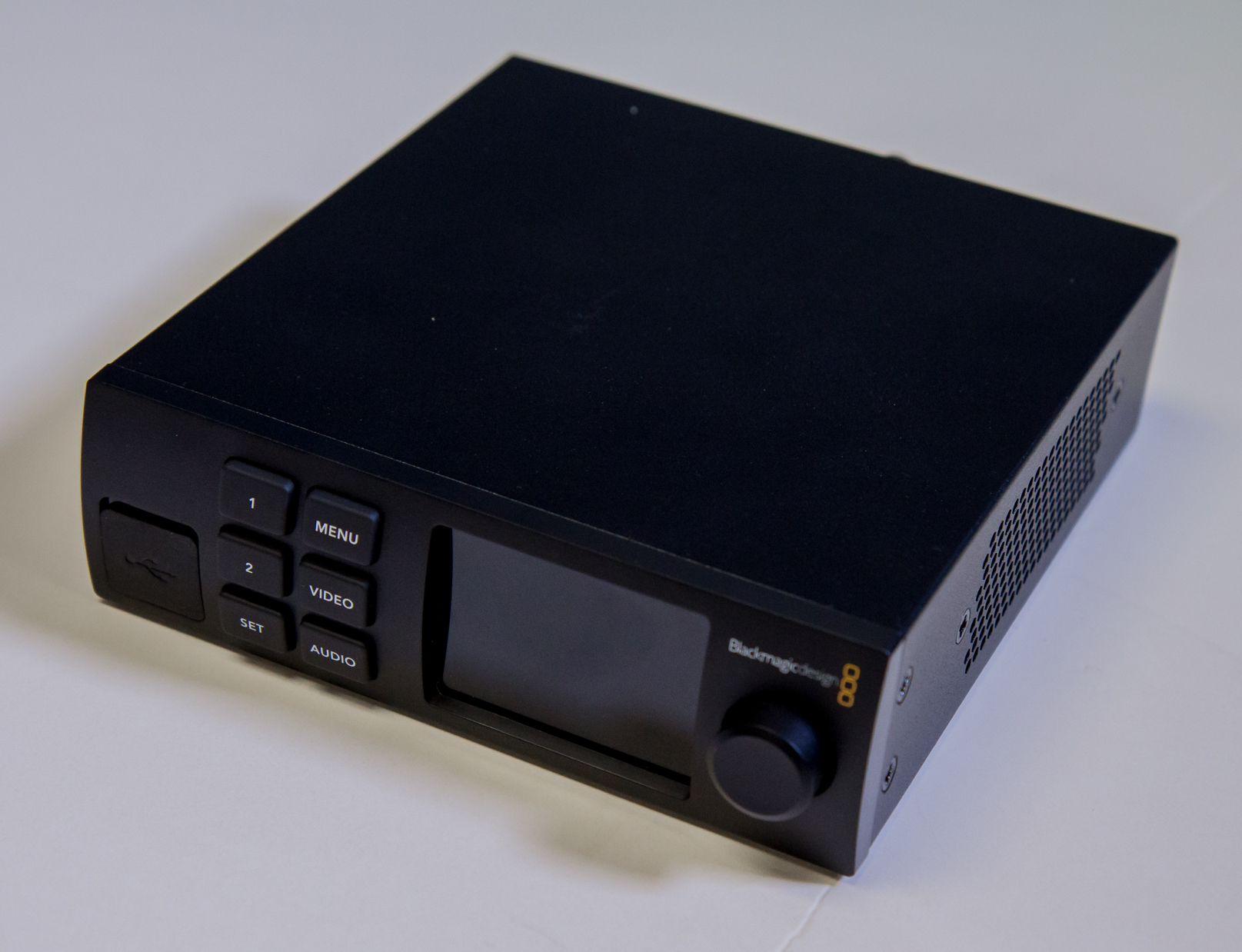 If everyone expects online video to suck then it is time to stand out from the crowd. The Web Presenter is one tool a cinematographer / DOP, Director, Editor or Producer could use to elevate their online interviews. So often now productions and companies will interview prospective hires via Skype. I see the Web Presenter as one way to show off a shooter’s skill level and professionalism. If you are looking to be hired for you technical skill as well as your artistic style and taste then it might be wise to have the best-looking video no matter the medium.

This feature was a big one for me. For me, the little cost of around $500 for a Web Presenter seems like a fantastic return on investment if you are constantly talking to producers online and using Skype as your main avenue to talk to future clients or employers. It just seems smart. The bonus is you do not need to use any of the free broadcasting software needed for Facebook Live and Youtube. All you need is a camera, the Web Presenter, and a computer with internet access.

Matching an on-air broadcast to a Facebook Live can be a little challenging. Broadcasters’ have a few options like Wirecast where they can use a router to patch in different sources, like on-air content, to Facebook and Youtube. The Web Presenter is a great add-on to this system or an added stand-alone streaming box. The Web Presenter offers up tools allowing broadcasters the ability to keep their quality control online to the standard usually reserved for over the air broadcasts.

I used the Web Presenter quite a bit once it arrived. I found the actual web presenter converter box to be the easiest rung in the ladder to high-quality live streaming video. I had far more problems fumbling through the free software needed to post to facebook live videos. I tried both Open Broadcaster and XSplit Broadcaster. I settled on Open Broadcaster because I found it simpler to set-up and to show others how to set it up.

Now, I am not a live television director and nor have I ever been one either. Yet, after a little bit of a learning curve, I was able to drop in graphics, capture clean audio, and stream onto Facebook. In the initial firmware, the Web Presenter had a touch of a flat picture profile and the audio had a little bit of the under-the-water sound to it. Was this the Web Presenter or the software? I have no idea, but I do know Blackmagic updated the firmware to the Web Presenter to solve the audio problem among a few others. This updated included:

As for the flat picture? I used a filter setting in Open Broadcaster to create a more pleasing look as a quick solution. Usually, Blackmagic Design continues to add features and fixes to their product’s firmware. I expect Blackmagic will do this such updating to the Web Presenter especially considering it will be the last converter box before a live production goes online.

Is this a problem? Why are we not able to stream 1080/2K/4K? Facebook only takes 720 at 30 frames per second at the moment. I feel like Blackmagic used Facebook’s specifications and through the free broadcasting software, they delivered it and not much more. If Facebook were to update their video streaming capability I would bet Blackmagic, along with other manufacturers, would upgrade their products to match. Until now, I do not mind a 720p only resolution. I’ll take a decent clean video signal that does not drop out over not streaming any day. 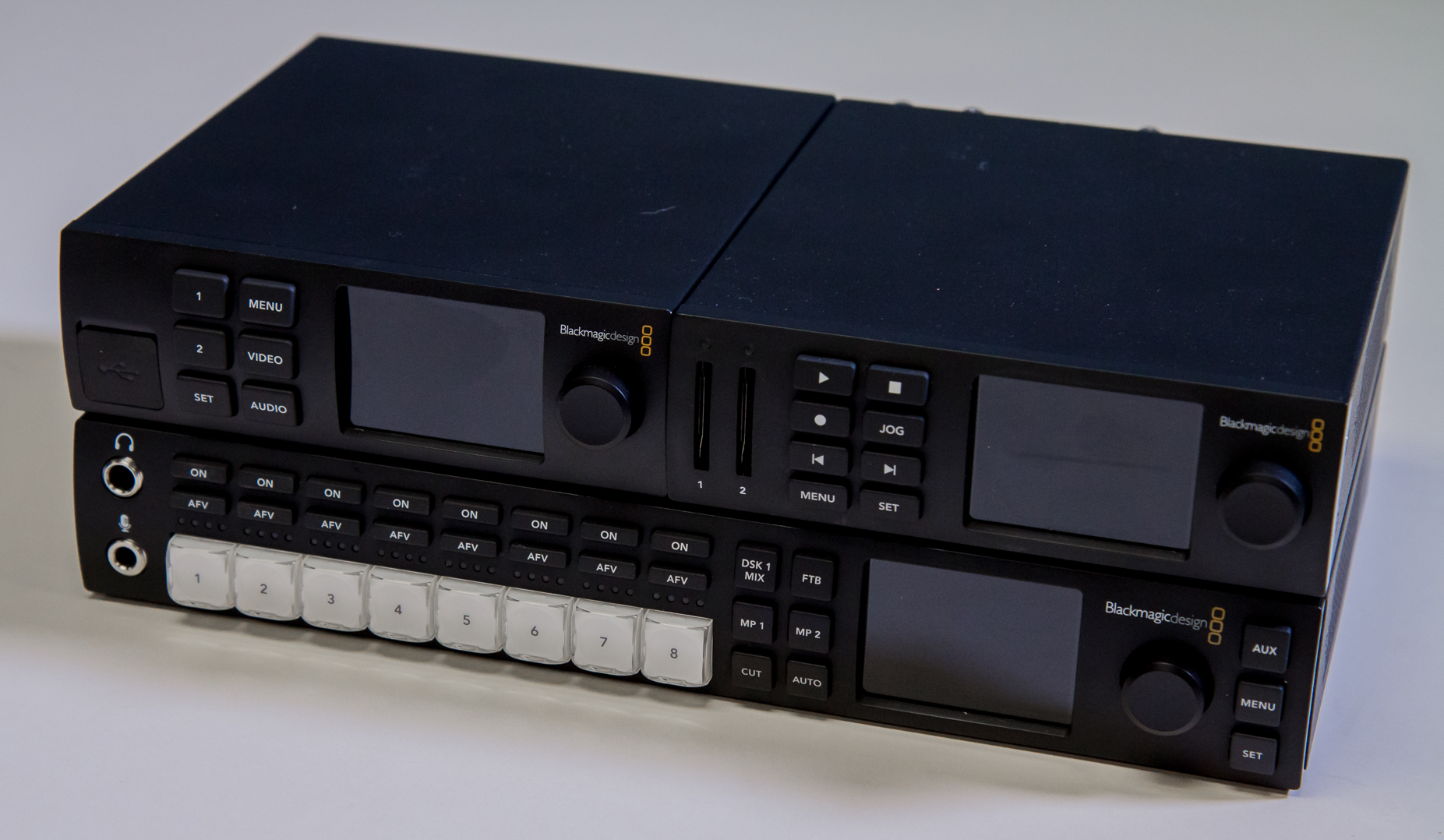 The only problem with the Web Presenter is the two inputs: SDI or HDMI. You can switch between the too, but that’s really it. For bigger live productions Blackmagic also released tools to scale up your live streaming video. Also, it was only recently that Blackmagic enabled the buttons on the front of the Web Presenter to actually work. If you were an early adopter I think it may be wise to update the firmware and gain access to the front panel features.

With this converter box, online video producers can now add video playback to their Facebook Live or Youtube Live videos. SD Cards. Got to love the simplicity of SD Cards for playback. The video professionals like myself have a ton of SD Cards. I could be because I have a 4K Video Assist and tend to hoard fast SD Cards for that monitor/recorder. I gave this box a try and found it works as stated. Could I deep dive into it? No my wife and I had a baby the week after Blackmagic Design sent me a review unit. Needless to say, my time became a little more limited.  The same is true for the ATEM Television Studio HD. I could test it worked well and that was about it. Now, that my child is close to 2 months old I am just now getting my head above water. Back to the Hyperdeck Studio Mini.

Think of the HyperDeck Studio Mini as a miniaturized broadcast deck that is small and portable. Users get a small deck that records and plays back broadcast quality 10-bit video such as Apple ProRes files on SD and UHS-II cards. For formats up to 2160 30p, the HyperDeck Studio Mini has a 6G SDI connection, an HDMI 2.0 for monitoring, dual SD card slots for non-stop recording and a reference output with built in sync generator allowing you to daisy chain and synchronize multiple decks. 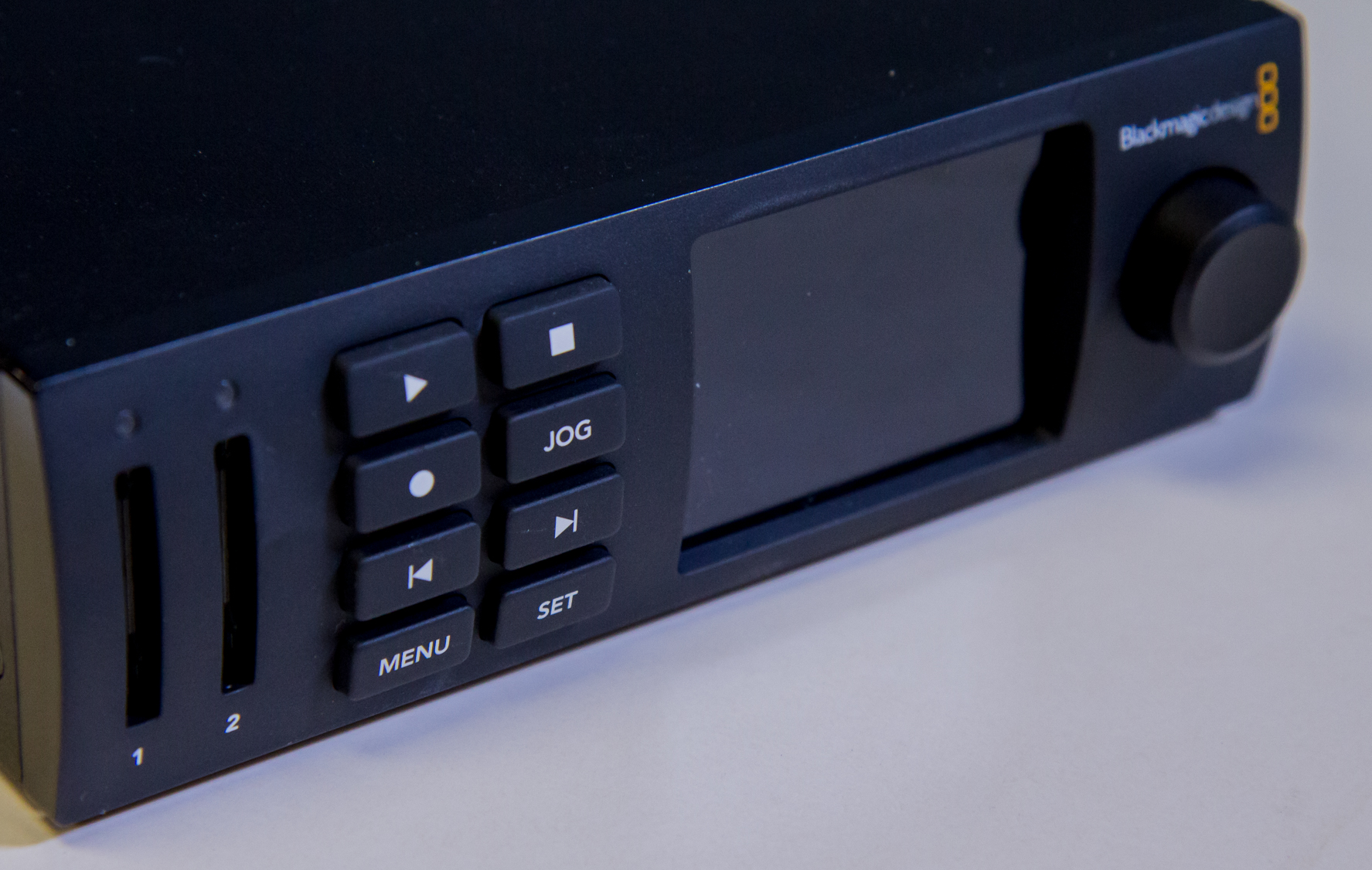 This is the heart of multi-camera live streaming. With the ATEM Television Studio HD, you can build out a professional live studio. I could see many vloggers or companies wanting to have a multi-cam facebook live streaming turn to the ATEM Television Studio HD. Using this group of gear even opened up the idea of streaming my “Art of the Shot” interview series to the web when I talk to a cinematographer in person.

The ATEM Television Studio HD includes 4 SDI and 4 HDMI inputs allowing you to connect up to 8 1080 60p sources. The ATEM Television Studio HD has re-sync on all inputs so you always get clean switching whether you’re using professional or consumer cameras. Users will get a multiview output so they can see all of the sources, preview, and program on a single screen, aux out, built-in talkback, 2 still stores, an audio mixer, and camera control unit. Seriously, this little box holds nearly all one may need for any remote live production.

This where the learning curve started for me. You kind of get what you pay for here I think. Are the programs like Open Broadcaster or XSplit Broadcaster easy to use? Once you figure it out, yes. It just took me quite a bit of tooling around to figure it out. Of course, I am not a live show director and that could have added to my learning curve.

Make no mistake, Facebook is quite specific on what video they will accept. If you cannot live stream on Facebook I might bet you have one of these settings below not correct.