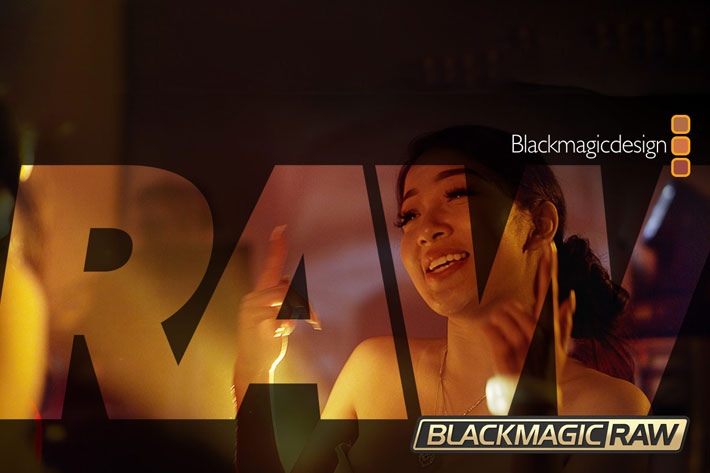 Blackmagic Design has some of the most popular cinema cameras, has a NLE, DaVinci Resolve, which is VERY popular and now also has its own RAW: Blackmagic RAW. It’s a goodbye to CinemaDNG.

Announced today at IBC 2018, the new Blackmagic RAW, in public beta, suggests the direction the company is taking. The new RAW is a very modern codec that combines the quality and benefits of RAW with the ease of use, speed and file sizes of traditional video formats. Blackmagic RAW is a more intelligent format that gives customers stunning images, incredible performance, cross platform support and a free developer SDK.

Blackmagic RAW has been in development for years and is a next generation codec that features multiple new technologies such as an advanced de‑mosaic algorithm, extensive metadata support, highly optimized GPU and CPU accelerated processing and more. It can be used from acquisition throughout post production for editing and color grading, all from a single file.

Traditional RAW codecs have large file sizes and are processor intensive, making them hard to work with. Video file formats are faster, but suffer quality problems due to the use of 4:2:2 video filters that reduce color resolution. Blackmagic RAW solves these problems with an intelligent design that moves part of the de-mosaic process into the camera where it can be hardware accelerated by the camera itself. This results in incredibly efficient encoding that gives customers the same quality, bit depth, dynamic range and controls as RAW, but with much better performance and smaller file sizes than most popular video codecs. Because the processor intensive partial de-mosaic is done by the camera hardware, software such as DaVinci Resolve doesn’t have to do as much work decoding the files. In addition, GPU and CPU acceleration make decoding of frames incredibly fast, so you get extremely smooth performance for editing and grading.

Blackmagic RAW is much more than a simple RAW container format. Its intelligent design actually understands the camera and the sensor. This means the image data, along with the unique characteristics of the image sensor, are encoded and saved into the Blackmagic RAW file, giving customers much better image quality, even at higher compression settings, as well as total control over features such as ISO, white balance, exposure, contrast, saturation and more. 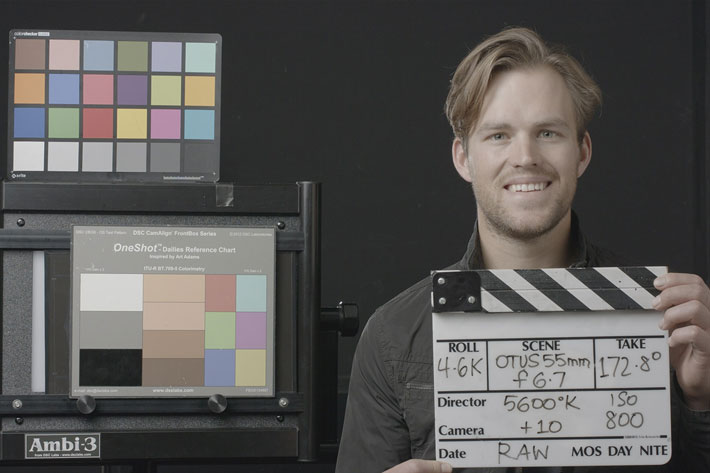 Blackmagic RAW features two types of file compression. Customers can choose either constant quality or constant bitrate encoding options, depending on the kind of work they are doing. This lets them prioritize image quality or file size. Constant quality uses variable bitrate encoding so complex frames are encoded at higher data rates to preserve detail and maintain the highest possible quality. Blackmagic RAW Q0 has minimum quantization and yields the highest quality, while Blackmagic RAW Q5 uses moderate quantization for more efficient encoding and a smaller file size. Blackmagic RAW 3:1, 5:1, 8:1 and 12:1 use constant bitrate encoding to give customers the best possible images with predictable and consistent file sizes. The ratios are based on the unprocessed file size of a single frame from the camera’s sensor, making it easy to understand the relative amount of compression being used. 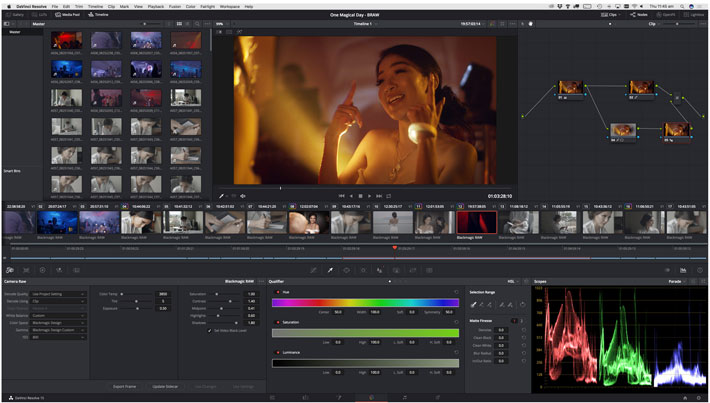 The pristine camera native quality of Blackmagic RAW Q0 and 3:1 are perfect for effects heavy feature film and commercial work. Blackmagic RAW Q5 and 5:1 are extremely high quality making them great for episodic television and independent films. Blackmagic RAW 8:1 and 12:1 offer high quality and speed, making it suitable for productions that wouldn’t normally consider shooting RAW. Now, more customers than ever will be able to use high quality RAW images in an incredibly efficient way that was impossible before.

“Blackmagic RAW could entirely change the workflow going from camera through post production,” said Kees Van Oostrum, Director of Photography and President of the American Society of Cinematographers. “A superb image quality, fine detail and incredibly small file sizes could possibly make Blackmagic RAW the go to format for filmmakers. It will be an important change for post because the editorial team can work with the camera original files, which are fast enough to use for everyday editing. That means less confusion in regards to creative choices I make at the camera. The images can now travel throughout the entire workflow because we’re shooting, editing and grading with the same files! Blackmagic RAW could be a game changer in the way films, television shows and commercials are made.”

Blackmagic RAW dramatically simplifies and speeds up post production workflows. DaVinci Resolve 15.1, which was also released today, includes full support for Blackmagic RAW. The performance of Blackmagic RAW is much faster in DaVinci Resolve than any other RAW format. This makes editing, color correction and visual effects incredibly fast. In addition, working with single files instead of folders full of still image sequences greatly simplifies media management. When the RAW settings are changed in DaVinci Resolve, a .sidecar file can be generated or updated if one already exists. When opened in other software applications that support Blackmagic RAW, the .sidecar file, which contains the RAW settings made in DaVinci Resolve, will be automatically used to display the image. If the .sidecar file is removed then the file will be displayed using the embedded metadata instead. This innovative new workflow gives customers a non-destructive way to change RAW settings while working between different applications. 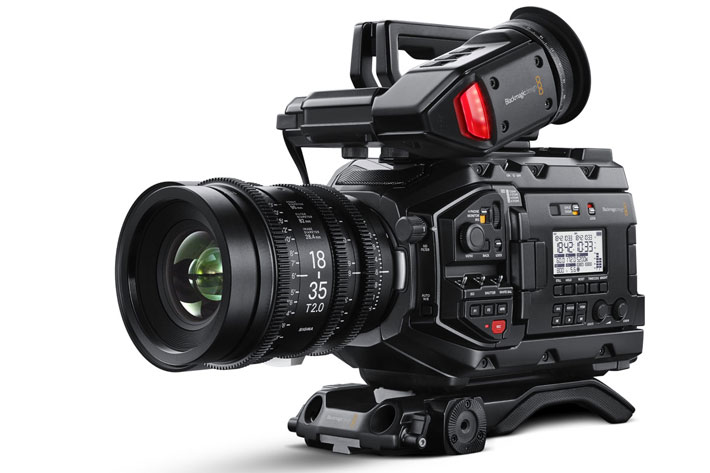 Featuring a fully scalable design and completely modern CPU and GPU acceleration, Blackmagic RAW is optimized for AVX, AVX2 and SSE4.1 enabled processors, multi-threaded, works across multiple CPU cores and is GPU accelerated with support for Apple Metal, CUDA and OpenCL. Frame decoding and image processing is extremely fast, making it super smooth for editing, color correction and visual effects in DaVinci Resolve. Another benefit of media being stored as single files, and not image sequences, is it makes media management easier and file copying much faster.

The free Blackmagic RAW Developer SDK is available on Mac OS, Windows and Linux. This SDK takes care of all the work for developers, so adding support for Blackmagic RAW to third party software applications is easy and fast. Developers get access to GPU and CPU accelerated algorithms for decoding files, along with unique information about the camera’s image sensor so their applications can accurately decode and display the files. The SDK features highly descriptive and flexible metadata options designed to support today’s modern workflows. Metadata is embedded directly in the .braw file or it can be stored in a .sidecar file. Metadata is important because it contains the RAW settings along with information for the slate, iris, focus, focal length, white balance and a lot more. The metadata in .sidecar files can be used on top of the embedded metadata without overwriting it. Blackmagic RAW also supports frame based metadata so customers can access values, such as focus distance, that often change on a frame by frame basis.

“Blackmagic RAW is the world’s only truly modern, high performance, professional RAW codec that is open, cross platform and free,” said Grant Petty, Blackmagic Design CEO. “It’s exciting because customers can get the visually lossless image quality of RAW with the speed of traditional video workflows. Best of all, there are no hidden licenses or ongoing fees. Blackmagic RAW has been designed to provide the industry with an open, elegant and standardized high quality image format that can be used across products and in customer workflows absolutely free!” 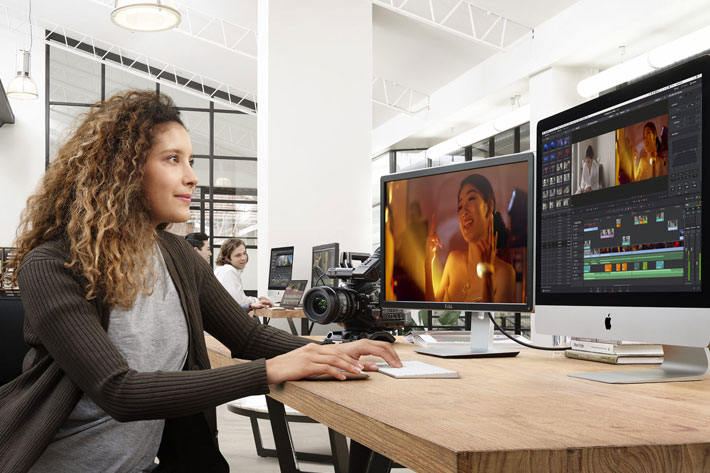 As a footnote to the presentation, and in one email sent today, Grant Petty adds that “Blackmagic RAW is much more intelligent than simple RAW container formats like the CinemaDNG format we have used in the past, because it understands the characteristics of the image sensor and the camera’s color science. This means we get much more cinematic images and the quality is much better for smaller file sizes.”

Blackmagic RAW is, for now, restricted to Blackmagic Design cameras, or the URSA Mini Pro in particular, but due to its characteristics and the fact that it is free may define what the future will be in terms of video codecs. We’ve seen what DaVinci Resolve made to the industry in terms of NLEs.

Blackmagic RAW is available today as a public beta via the Blackmagic Camera 6.0 Beta Update for URSA Mini Pro. The final release of Blackmagic RAW is expected to ship in several weeks’ time once further testing is complete. The DaVinci Resolve 15.1 Update, which features support for Blackmagic RAW, has also been released and can be downloaded today free of charge from the Blackmagic Design website.