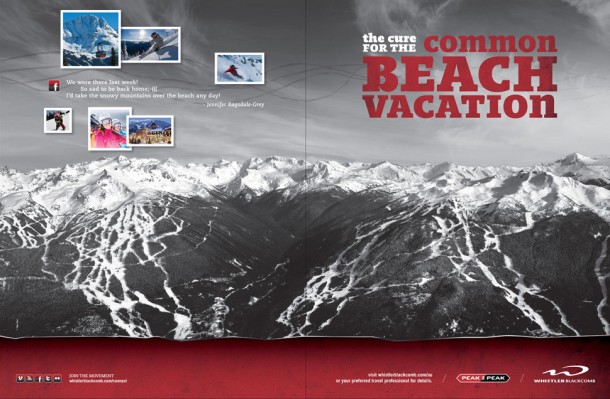 This week I thought I would do something a bit different. I'm currently putting some interesting and very cool products through some testing but in the meantime I decided to show a little bit of my regular work because blogging, reviewing and writing is only a part-time gig for me. The majority of my time is spent shooting commercial and editorial action sports and tourism photos. So let's take a quick look at some photos that I shot in the spring time for my home ski resort Whistler Blackcomb, which you may recognize as a host venue for the Olympic Winter Games which took place there earlier in the year. 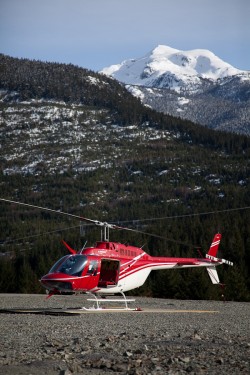 The first thing that is different about this shot is that it was deliberately not shot on a day with particularly nice weather. Whistler Blackcomb along with their design agency Origin Design had decided that they wanted to achieve a different look this year from the regular bluebird powder day photos that normally fronted their campaigns. They decided to go with a black and white design and so we decided it would be better to shoot on a slightly cloudy day to try and get a bit more character in the sky. On top of the cloudy stipulation we also needed fresh snow on the trees to make the perfect shot. Getting these things to come together was a bit of luck but after a couple of false starts we got some promising looking weather. I shot the image using a Canon 5dMKII. I also had a Canon 1DMKIV with me as backup but the full frame 21MP sensor of the 5DMKII was the best choice for the job for a couple of reasons. Firstly we were shooting at the end of the day so the light levels were quite low and secondly when you are hanging out of the side of a helicopter you need to use a much higher shutter speed than you normally would for a landscape photo due to all the vibrations. The final exposure was 1/2000 , f10, ISO640. 640 is pretty high but necessary to get a fast shutter speed and enough DOF in the low light. The full frame sensor of the 5DMKII produces stunning images even at ISO640. The lens I chose was the Canon 24-105mm f4 L IS because I wanted versatility in my compositions. We had a number of ideas on how we would frame the shot, and when the side of the helicopter has no door, there is no room for messing about trying to change lenses; versatility was key so the 24-105 was perfect and had IS to help with the vibrations from the engine.

This is another shot from the shoot that I really liked, but did not end up getting used. 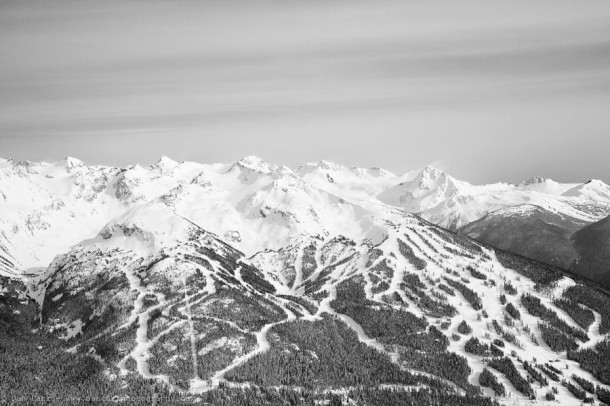 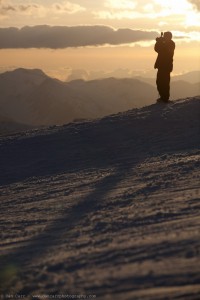 This image at the top was to run as their main advert in the majority of ski magazines around the world, but they also required a couple more ads to target the younger audience reading some of the major snowboarding and freeskiing magazines around the world. Firstly we teamed up with some of the best snowboarders out there. The Sandbox film crew came in with a few riders to film for their new snowboard movie called Now You Know and Red Bull brought in a second helicopter to shoot some follow cam footage. The idea was to carry over the black and white theme from the scenic shots we did last time from the helicopter so I was hoping for some dramatic lighting. The snowboarder in the shot below is Seb Toutant, a young Canadian rider who has taken the snowboarding competition world by storm last season. Lighting on the snowboarder comes from an Elinchrom Ranger battery powered strobe that I wrote about last week. 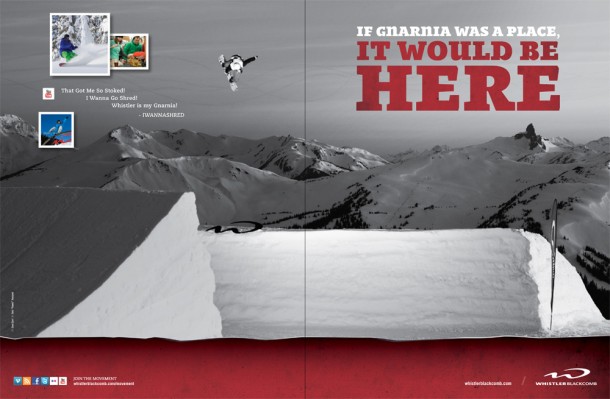 Here is another image from the shoot that did not get used in the end. 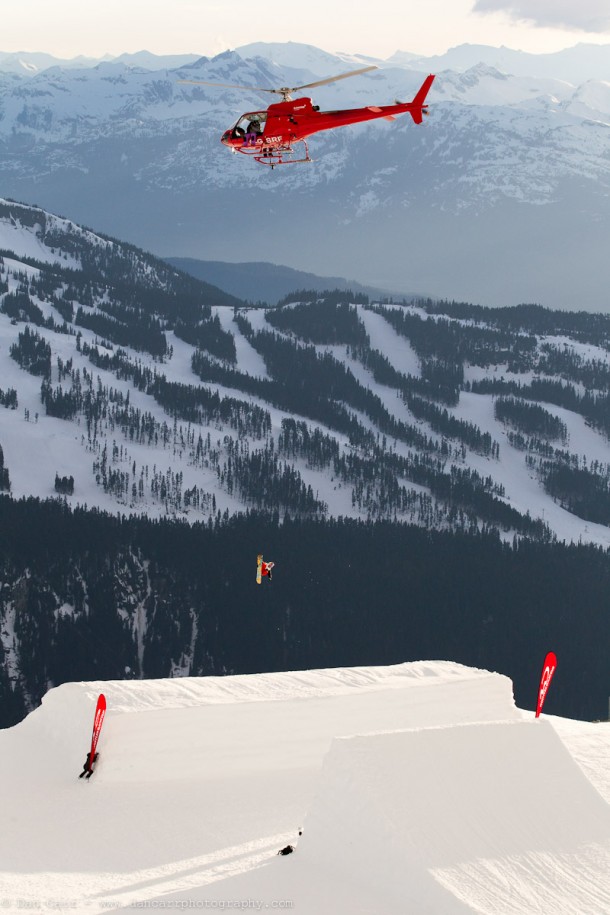 Courtesy of my assistant here are a few behind the scenes shots of me at work on that evening. 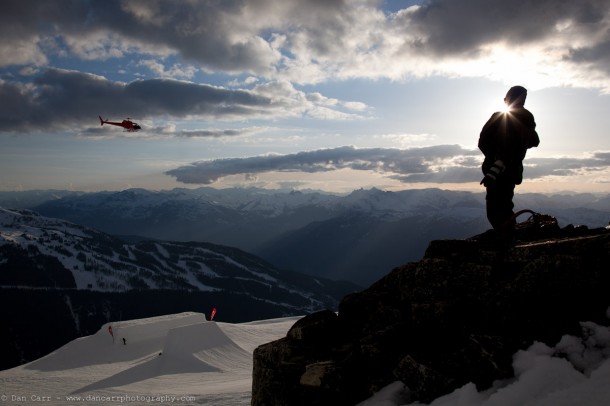 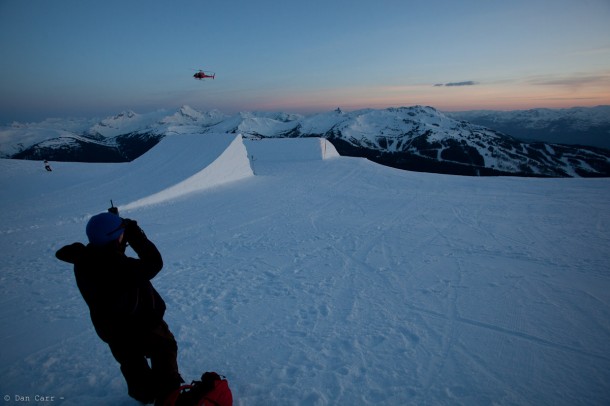 So that covered the image needed for the major snowboarding magazines around the world. The final thing to do was repeat the same shoot with some of the worlds best freeskiers. For this we called on the guys from Poorboyz productions who were shooting for a new skiing movie called Revolver. They showed up to Whistler with a great crew of athletes and we repeated the previous shoot. This time though we did not have to wait until sunset to get the dramatic look we wanted. Towards the end of the afternoon the clouds were looking great and they worked perfectly for our black and white theme. 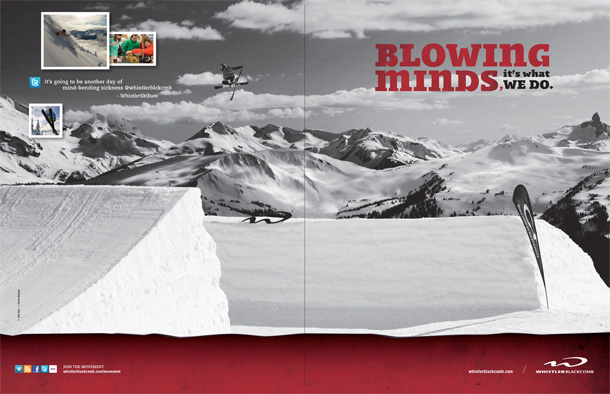 Poorboyz productions also ended up using an image of mine from this shoot to advertise their new movie. 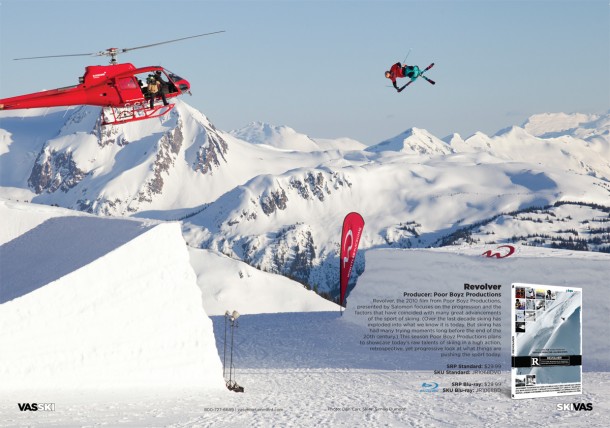 And Oakley, the eye wear manufacturer decided to make some advertising posters to represent one of their sponsored athletes too.