I recently photographed Courtenay Semel for Curve Magazine. The magazine interviewed her for the next issue, and they hired me to shoot the cover and inside spread.

Courtenay had never been photographed. Not in a controlled situation. She’s a socialite, not an actress or model, so this sounded like a challenge. Actors and models are generally easy to photograph, they’ve had a lot of experience in front of the camera. It makes my job easier. But even beautiful people without lens time can be a real challenge. Court was a champ, she showed up ready to have fun and let her larger-than-life personality shine. I had my “A” team, makeup artist Jaime Franco and stylist April Steiner. April brought a team of assistants and a truckload of clothing, shoes and accessories. She always has incredible stuff. Jaime is not only one of the best makeup artists I’ve ever worked with, she’s incredibly fast, often using an airbrush and creating amazing looks. Had friend MoPho assisting and friend Mike Ditz shooting video and heckling me. Everyone on the crew is just plain fun to have around.


Courtenay brought friends and a few came and went during the day. I think she wanted to have some of her people to increase the comfort level on her first shoot. Her jitters faded as she got into the clothes, makeup, and I turned off the studio’s internet radio and put on some Britney and Lady Gaga!


We set up the lights for the first shot, I thought since this was Courtenay’s first shoot I’d put her in the spotlight. Literally. I borrowed Mike’s Norman fresnel. It allowed me to use strobe but have the control of a good-sized fresnel to focus the light. It’s amazing how little power you need with a fresnel, we had to really crank the power down. We shot in a white cove to keep it simple. I was thinking cover. I didn’t light the wall behind her, instead letting the light fall off to shades of grey. I did my best to put her at ease, especially with her inexperience with photo shoots and trying to get a cover on the first shot. She nailed it! 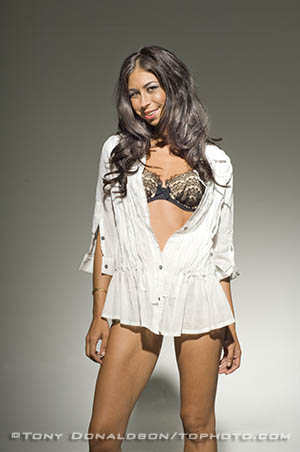 Since we had limited time in the studio and had to get a large variety of images for the magazine, I stayed in the cove for the next shot. While Courtenay changed clothes, I switched to Dynalite lighting and a beauty dish. I love the beauty dish for portraits, the quality of light is fantastic and very subltly controllable. This time I hit the background with enough light to make it white. 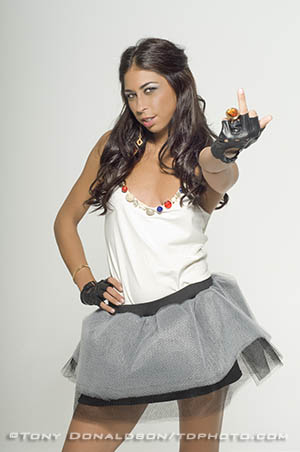 Courtenay’s signature pose. Had to let her run with it.

We took a little break to eat lunch brought in from nearby Philipe’s, originator of the French dip sandwich. They really are fantastic. I also always make sure there’s coffee and snacks for everyone. A well-fed crew is a happy crew. Nobody wants cranky assistants or subjects. Or photographers.


The next shot was using “The Jesus Wall” as a background. Studio owner Kevin Break started it a while ago, collecting images of Jesus and hanging them on a wall he’d painted a bright, rich red. I loved the symbolism and color, so I juxtaposed Court against it wearing a sexy, backless dress. I again used Dynalite, this time with a combination of bare heads with barn doors (to control spill), a strip box and a large softbox. All triggered with Pocketwizard MultiMax units. The result was beautiful and rich. 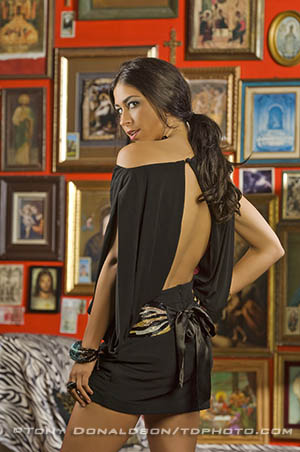 Final location was this wall with an interesting wash, a beautiful rug and an interestingly distressed couch. There was nice light coming in from the window, but it wasn’t enough, so I opted to create a “window” light with two large softboxes. It allowed me the exact f-stop I wanted and a short exposure to freeze any movement from me or Courtenay. We shot two looks/outfits here. The very last one had me precariously balanced on two rickety tables stacked on top of each other so I could shoot directly down on her. Yeah, I could have used a ladder, but it was hard to get to and time was short! 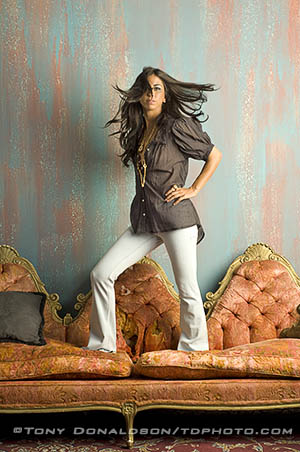 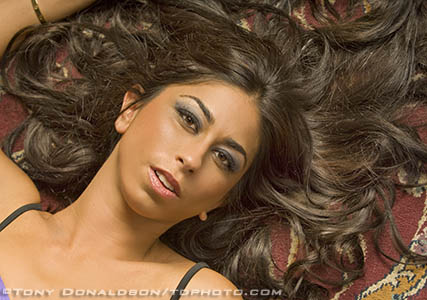 The combination of a great crew, a few good ideas, a big, beautiful personality and a funky location came together in a magical way. Good people, good light, and good food make for a fun day and wonderful images!

More images and the interview are at curvemag.com .