I normally don’t to a lot click-bait, scare-mongering blog posts trying to keep up with some breaking news but there is a rather odd problem that has been cropping up for a day or so around “Hollywood” (I put Hollywood in quotes as this could potentially affect anyone) but it’s this Variety article that is really spreading this story far and wide. This problem is pretty big but I don’t see much in this Variety article than a few tweets, one of which comes from an Adobe employee. It’s the private Avid groups where this is being discussed very diligently with system admins and users helping each other. Avid is aware is working as hard as they can to figure it out even though it’s probably not only an Avid thing. PLEASE SEE THE UPDATE DOWN BELOW AS IT’S NOT AN AVID PROBLEM.

To all @Avid customers/users. Please see the attached update from our team on the issues uncovered late yesterday by #Avid users regarding some models of Mac Pro. We’re on it…and determining the cause and how to resolve it is a top priority for us! Stay tuned… pic.twitter.com/R75TYn6mVP

And Avid has posted this video about the issue and a deeper dive into what is happening and how to fix.

And here is the full thread from the Tweet above since it doesn’t seem to want to embed correctly. Thanks Rune for sharing it. 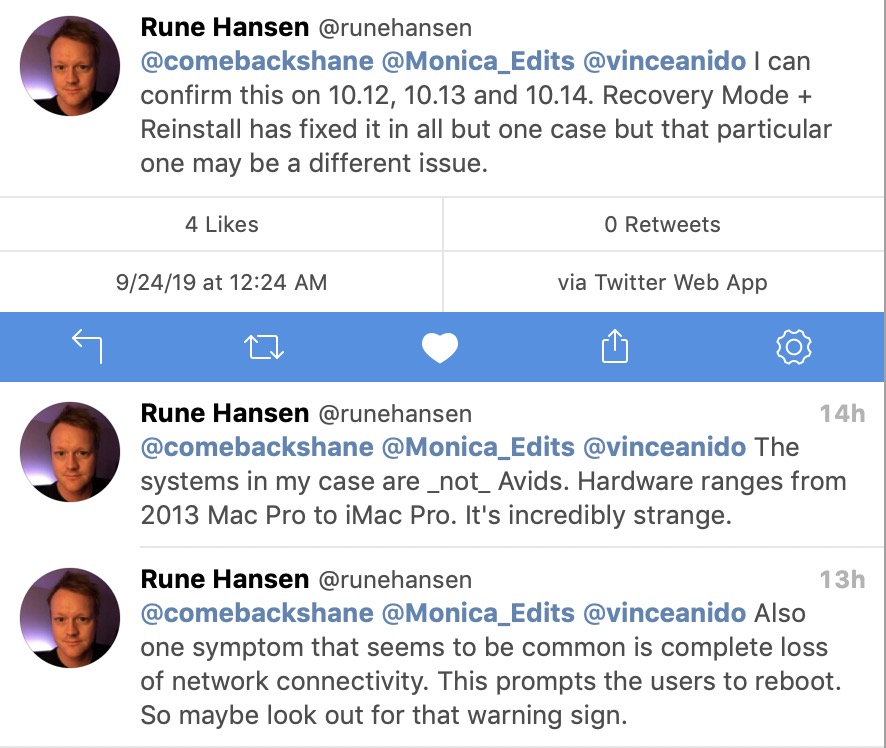 And another possible fix options via Twitter and Juan Salvo who is one smart cookie when it comes to these kinds of things (I’m not commenting on any solution here as I’m clueless, only trying to document):

Seems like iLok is unlinking /var from /private/var, on systems with SIP that change doesn’t persist, but disable SIP and shit breaks when you reboot.

The bigger thing to follow has been the Avid Editors of Facebook group. This is a closed group and is one of the best forums for all things Media Composer. There are currently over  500 comments about this issue in a discussion that began yesterday. This is a close-knit group that doesn’t hesitate to ban someone when they get off topic so I hesitate to post too much from the private discussions but in the interest of helping those that might need more info on this topic I’m going to note a few things I’ve read about this and copy/paste a few helpful things below.

A ton of credit for the work that is going into figuring this out (at least from the more public-facing discussions about this online) have to go to Rob Kraut who has been working tirelessly since it cropped up. I’m going to post a couple of direct quotes from him that was posted in the Avid Facebook group:

So far the rebuild of the OS has worked and it is being implemented all over town. Contact your Avid vendor about how to do this if you do not know how. If anyone runs into this problem moving forward after this rebuild, definitely post here.

IMPORTANT INFO — If you are still up and running, one quick way to see if you’ve been affected is this: If you know that your Mac OS user is an admin user and not a regular user, go into System Pref, then Users & Groups. If your account is no longer “Admin,” but a regular user, this is a sign that your system has been affected and do not turn it off until you have all of your important stuff backed up!

hold CMD-R when you boot until you see the Apple logo. Let it boot into recovery mode, then reinstall the OS. (If anyone reading this is on a cloned/imaged system this will not work. You can’t clone the recovery partition, so when you hold CMD-R (CMD-OPT-R on older OS’s), it will download a temporary RAM boot recovery partition, then you can reinstall…but be fair warned, it will have to also download the OS installer before it runs… 6gb or so over slow servers.

I think good advice here is that if you’re working with a reseller then contact them about this issue if it has hit your systems. It’s hard to know exactly what the cause is and what to do to keep your system up and running. I think the best advice would be to disconnect your editing system from the internet and do not reboot. But better advice would be to keep reading the official channels from companies like Avid who are working to figure out the issues.

I hesitate to publish this post as I don’t want to spread misinformation nor do I want to promote a person’s services but this from Isaac is good advice (and he is very knowledgable in system admin and NLE system support).

There’s some irresponsible information going around about this #Avid #MediaComposer #MacPro boot failure.
If you need to get back online now, don’t panic. Work with your resident expert. If you don’t have one:#PostChat https://t.co/ouo9HYa2Gf

And as much as I hate to say it, I’ll say it again and agree with this tweet, Facebook is the place to go to follow this. If you aren’t already a member of Avid Editors of Facebook you might not get quickly approved as the admins are probably out monitoring all that is going on this morning.

Facebook continues to be the place to look for Avid updates, by the look of it.

(and AEofFB for community thoughts/ musings as well as official commentary) pic.twitter.com/ojVdJ9RnlJ

This might seem weird but I tried to replicate this on my portable system with an Avid launch and reboot but it’s running both the latest OS and the latest Media Composer and it booted just fine.

While it was posted above Avid has sent out their official statement via the usual channels:

UPDATE: This might be hitting more than just Avid users (as was partly noted above) but this is the first I’ve seen this mentioned directly on Twitter:

Same. Not running Avid but having the issue. @Avid @Apple

I don’t know anything about SIP but a Google and a read reveal it could be an important thing in this saga. In fact check out this article title as it’s something you might want to do: How to Check if System Integrity Protection (SIP) is Enabled on Mac.

If you want to easily check to see that System Integrity Protection is enabled on your Mac just use the About This Mac > System Report and check under software. 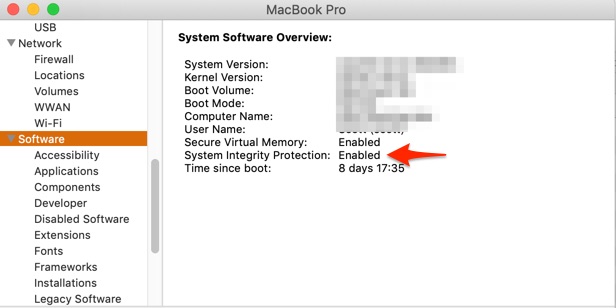 Obviously, this is deadly serious for many out there but we can have a bit of levity with the naming of the day can’t we?

I hope we call whatever is happening to our Avids the iLok-ness Monster. #PostChat

And maybe it isn’t really Avid at all though we do get good info and good puns all in this tweet!!

12:34 PM Okay just checked AEF page Seems that is it not the #Avidpocalypse but a #Google /#chrome issue (and people laugh, laugh I say, at my Firefox) So here’s a pic of the unredacted post. thank you Jeff Sengpiehl he’s also posted this on Linkedin. https://t.co/C492fCUATU pic.twitter.com/3QZa6cgJJf

UPDATE AGAIN and maybe the most important one of the day: This looks like a good post to follow as it’s looking more and more like this is a Google Chrome issue causing all the madness. And Google seems to know about it.

#varsectomy Trying to get all the information that #MacAdmins are finding into one place. We have investigators on the case! This post will be continually updated when new info comes in. @mikeymikey @foigus @eholtam #MacAdmins #postchat #Avid #notavidhttps://t.co/apUOzn8Otn