I was intrigued by a recent post from PVC’s Jose Antunes about Fastcut, a PC video editor that claims automatic video editing. I’m often intrigued by these automated products that claim to the do the edit for you but had never tried one. As luck would have it I was cataloging some old GoPro footage at the time and I thought it would be the perfect opportunity to try out Fastcut.

I was intrigued by a recent post from PVC’s Jose Antunes about Fastcut, a PC video editor that claims automatic video editing. I’m often intrigued by these automated products that claim to the do the edit for you but had never tried one. As luck would have it I was cataloging some old GoPro footage at the time and I thought it would be the perfect opportunity to try out Fastcut.

VIDEO EDITING IS NOW FULLY AUTOMATIC – Or so Fastcut says.

Fastcut is made by a company called MAGIX. MAGIX makes a number of products in the video, music, photo, design and web space. At 50 bucks (regular price is $70 when the January promotion ends) Fastcut isn’t a pro-level NLE and I wouldn’t expect it to be but as an editor who has a lot of family video lying around the idea of some type of automated, montage-style editing application is something I would gladly pay for … if it will do a halfway decent job.

Finding this old GoPro footage of my son playing at the park was the perfect way to test Fastcut. It represents exactly what I often do: grab a GoPro, DSLR or my phone, shoot for 30 minutes, maybe an hour or so of some family stuff then have the need to cut that up to some music and share it with the family.

As luck would have it I had actually edited this kid at the park GoPro footage a couple of years ago after I shot it.

No Fastcut in the edit above, that was the original cut that I created in a couple of hours. Color correction was seperate.

This was the video I did of the little at the park shoot, cut with Premiere Pro in a couple of hours. The color correction was extra but what we are looking at here is only the quality of the edit. The piece was about two minutes long and Fastcut offers up a 120 second option in many of its templates.

Since one of the prime selling points of this tool is automated editing I decided to let Fastcut do its thing. Importing the media was easy: I pointed Fastcut to the folder and then selected only the clips from the day at the park. Shift selecting wouldn’t work on selecting a range so I had to select them one at a time. Not too difficult with a touch screen but making a range selection seems like it should work. 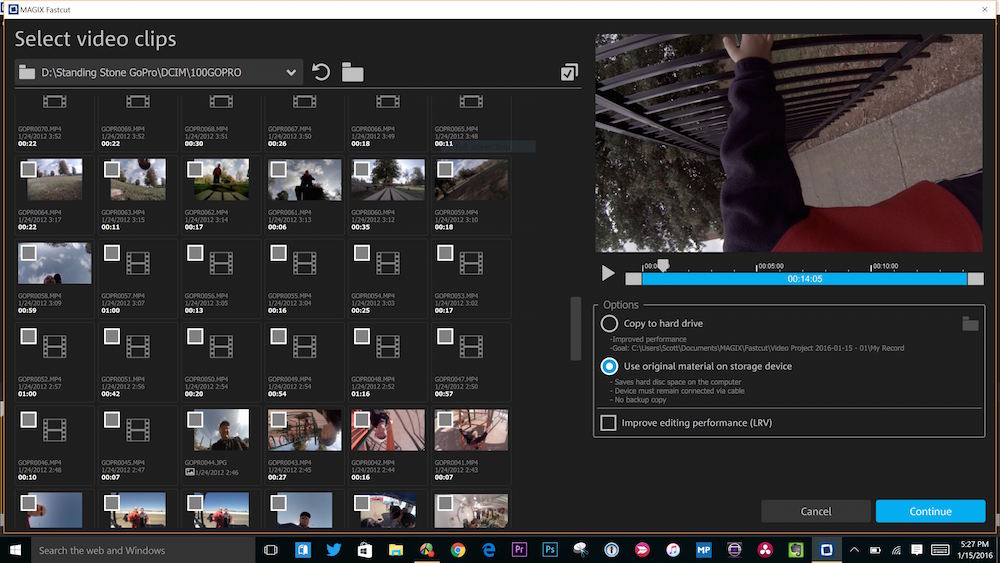 Fastcut can either leave media on external storage or copy it to your hard drive. The options and descriptions are geared toward the consumer as the descriptions aren’t completely accurate depending on the hardware being used. It does a good job of making things easy for a new user.

Once clips are selected then you choose the template, music included. You’ve got several options with the free trial but once you purchase the full version it unlocks more.

Once you choose your clips, decide on your length and let Fastcut cut for you.

How did Fastcut do?

You be the judge. The original cut is embedded at the top of this article. The Fastcut automated edit is below.

This was test edit one. No adjustments other than choosing a template that had a two minute option.

Honestly, I’m not sure how much one should expect from automated video editing software. Fastcut was able to select some shots and cut on the beat. That’s not too hard to do. But when it comes to choosing the most impactful part of the shot, it failed quite miserably. And when it comes to shot order, it failed at that too. I’m not sure how it chooses the order in which it places the shots, maybe the order I select them has something to do with it. To be fair I did not RTFM. Fastcut would use the same shot more than once, using a different part of the shot on repeat. A commendable thing to do but not entirely successful if it doesn’t use good parts of the shot.

To be fair once again you can go back and manually tweak the automated edit without going into full manual editing. A slider on each clip used lets you slip each shot to a different part of the clip.

You can see in the timeline thumbnail this shot of the kid climbing up onto the playgroud equipment. I really didn’t want myself in the shot and wanted him climbing on his own.

The blue bar at the bottom lets you drag to slip the shot to a new IN point.

If you don’t like the shot that Fastcut picked you can swap it out altogether via a little pop-up menu on each clip.

Other tools in Fastcut

The color tab did a decent job with *auto correction* and has sliders for the usual controls.

The Optimize tab allows for lens correction (with GoPro presets), image stabilization (with proDAD Mercalli technology), the ability to rotate (which was important to some of my shots) and a “rumble filter” (which will “remove thunks.”)

The Templates tab is like the filters or effects in your other NLE.

There’s also options to add text and titles and adjust audio levels of both the original clips and the background music.

Don’t like what Fastcut did in its automated editing mode? Then head to Manual editing and tweak the cut even more.

Being able to manually edit a cut is quite important as I doubt any automated editing software would ever get it just right. But “good enough?” Maybe.

This is where my experiment with Fastcut ended but I did poke around the manual editing mode for a bit. You do have the ability to shorten, lengthen and remove shots. Transitions can be seen in the storyboard-based timeline as well as edited. There is also a transition browser.

You might not find much use for the Cuboid transition â€¦ or then again maybe you might.

I didn’t expect an Avid Media Composer level of editing tools here and no one buying Fastcut will either. For the novice cutting their iPhone videos it’s probably perfectly fine though I don’t think it’s as feature rich as iMovie for the novice user. iMovie feels a bit easier to use while offering up some deep controls if you dig in. Fastcut also locked up on me several times while using it on the Dell M3800.

Another thing Fastcut didn’t do is built any shot sequences. I shot the video with the idea that I could cut two, three, four shots together to make a fun sequence. Fastcut didn’t seem to be able to do this even leaving out shots so the cut contains no footage from an entire sequence that I shot. I know this is asking way too much for an automated video editing application and I was putting more thought into the shooting of the video than most family video shooters. But as the hobbyist/family videographer grows in their skill this is something they will want to do. It’s also something that a pro-video-creator would want when looking for some tool to help them get their mountain of family video editing. I guess if that’s what you want it is time to move to another editing tool.

I had a few days left in the Fastcut trial so I thought I would give the automated template editing another try, this time with a different style of music. With this attempt I randomly selected the clips upon import instead of selecting them in the order they were shot.

Is it any better? You be the judge. It is different but that’s more the music style than anything else.

At least it looks like it took a long time to make this edit.

I got to thinking about this automated editing tool after this second try less from the standpoint of did it do a good job (IMHO it did not) but more along the lines of did it do AN ADEQUATE JOB? The answer to that is … maybe. What do I mean? In a family where you’ve got a parent who likes to shoot video of their kids but doesn’t ever take the time (or have the time) to edit the footage into something for the family to see MAGIX Fastcut does something amazing: it actually produces a finished video. That’s more than I can say for myself sometimes.

I bet wife and family would agree, it’s worth every penny.

Do you know of any other automated video editing applications out there? Leave a note in the comments below as I’d like to try them out.