4K, URSA Minis, Red Weapons, Vintage Lenses, and much more are inspiring pieces of gear which may help us do our jobs well. Sometimes, new gear can even excite us shooters and help us reach a deeper well of enthusiasm. Then there is the gear that just makes a shooter’s life easier. This gear is not defined by “K’s” or surrounded in the mysterious qualities of the glass found within. Nope, this review is about a piece of gear that helps you get a job done well. I’m talking about teleprompters, specifically Autocue’s iPad Teleprompter. Let me tell you why a good teleprompter can help you be better. It saves time and time on set is a premium. 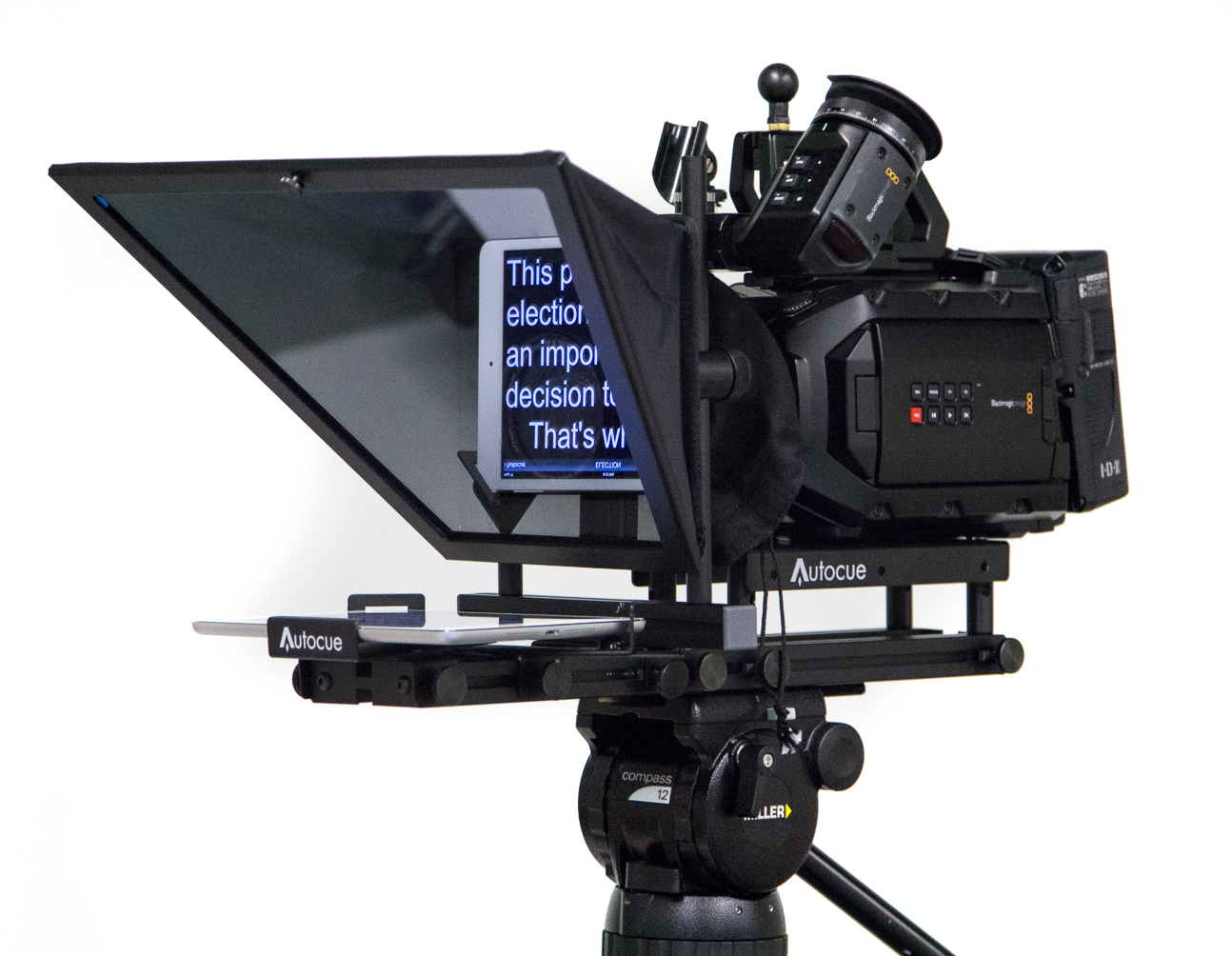 I shoot in a world of talking heads. We’re talking about commercials, news promos, and image spots. There is not a single day I do not shoot at least one person who is looking straight down the barrel of my lens as they try to recite the script verbatim. This almost never goes smoothly and we have to break up the script into easily digestible chunks. Depending on the on-camera talent, this can be a relatively smooth process of something more akin to a “time-suck.”

With a little preparation, one can use a simple-to-use Autocue teleprompter to help their on-camera talent present the script with confidence. I took Autocue’s starter series iPad Teleprompter package for a spin to see just how easy it was to set up, and how likely I would be to use it often. What I found was a little bit of a surprise to me.

Setting Up The Autocue

I’m used to large and bulky teleprompters. The iPad teleprompter was about the perfect size to compliment a Blackmagic URSA Mini to give you an idea about its size. The largest piece of the kit is the glass. Everything else is easily folded to reduce space. I could see myself keeping one of these in a pelican case at the ready without adding too much bulk or weight to the equipment truck. Below, I have included the set-up video Autocue provides on their website. In the video below, you can see how small, but not too small, the iPad teleprompter is. Compared to my memory of older, larger, teleprompters the smaller iPad version is much more portable.

I consider myself pretty apt with the technical. Directions? I tend to turn to them only when I become “bewildered.” In seconds, I felt like I understood how to piece together the Autocue. I only turned to the included USB stick with directions on it to check my work. Mechanically, the iPad Autocue is rather simple. I had the teleprompter out of the box and on a tripod in less than thirty minutes. Then I took another thirty minutes to fine tune camera height, glass height, and balancing the teleprompter on my Miller Tripod. The only thing I could see changing with the equipment is the use of flathead screws. In one set-up, while adjusting the camera platform’s height, I had mauled the screws simply because my screwdriver was popping out of the head. This could have happened because I was using the closest available screwdriver, but that’s likely to happen on a shoot day too. 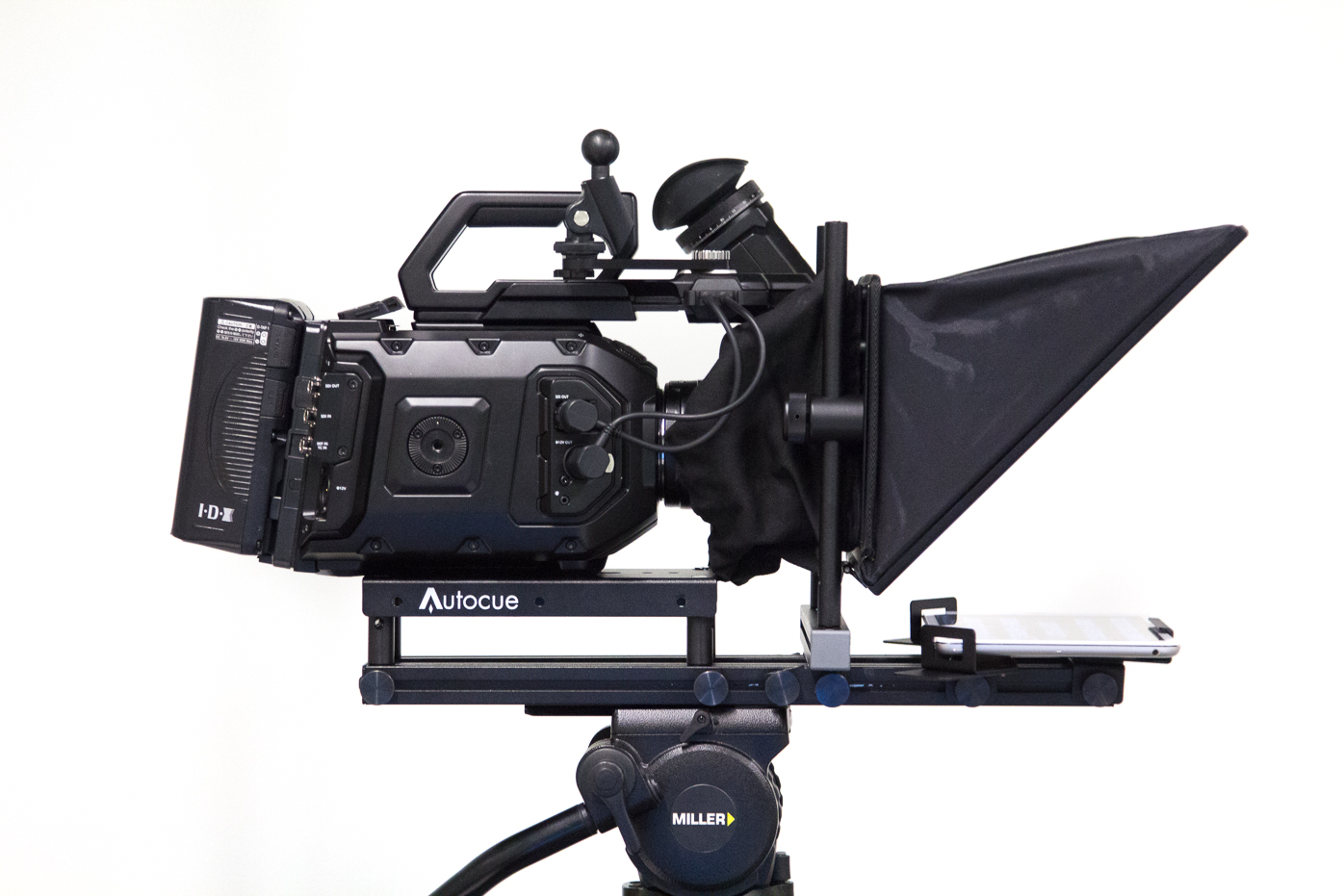 It is all in the app. For you to use your iPad Mini or iPad, you have to make sure your OS can download the Autocue app. I ran into a problem with 0ne of my producer’s who had an older iPad, might be original, and he could not download the correct app. The second producer had an iPad Mini on hand so the problem was solved quickly. I found the app easy to write in, but I am mostly working on short spots. My producers and I did discuss what a longer script could entail which would be necessary for a whole news show at a remote location. Clearly, one is not going to have the luxury of a connected iNews system like an in-house newsroom may use. There you can update and change the teleprompter on the fly. I feel like the Autocue app is best for environments with a little bit more control and less likely for sweeping changes a live news broadcast may experience.  For the controlled, and the smaller projects, the app will work just fine. 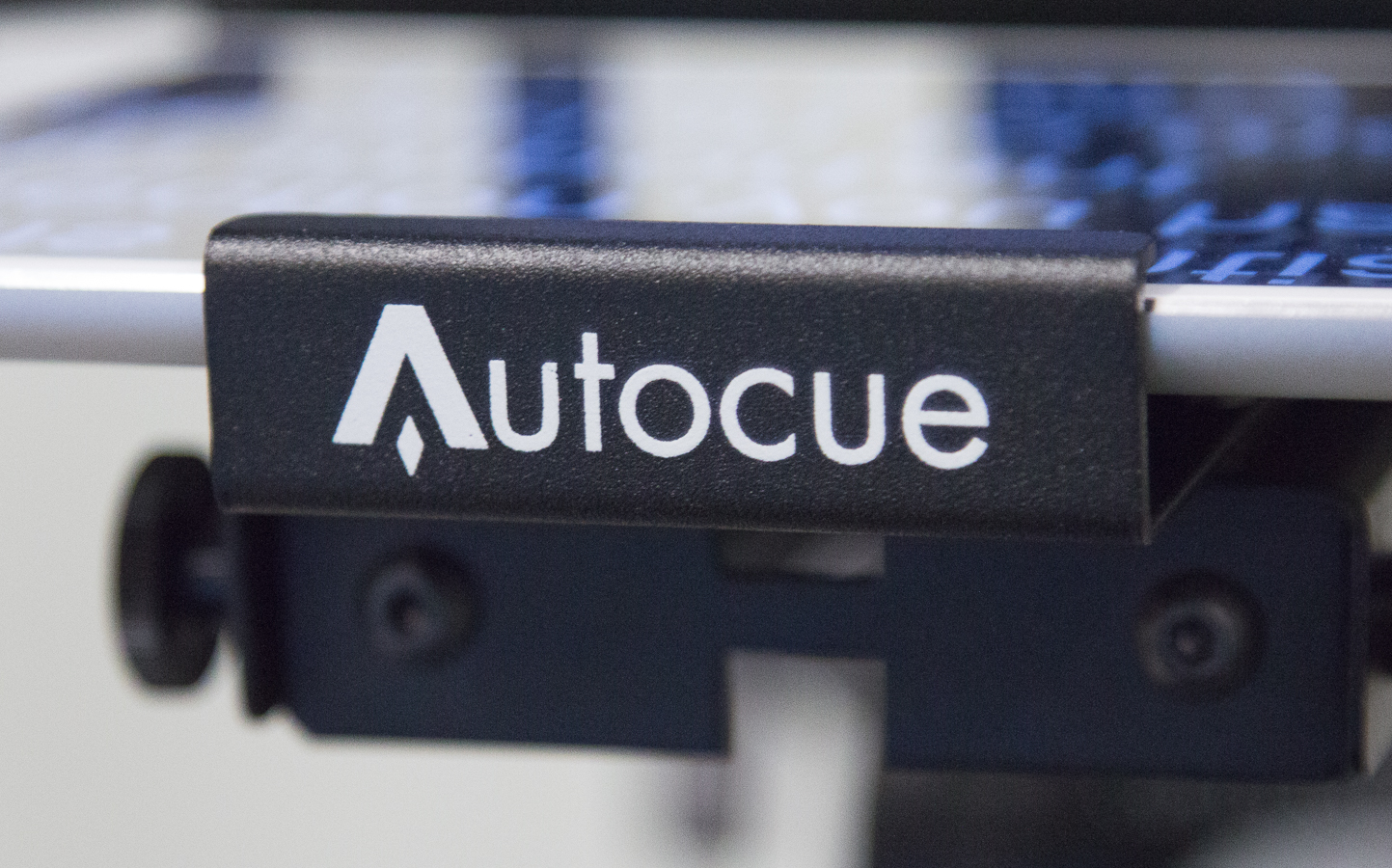 During my tests I took the teleprompter outside into various conditions to see how well it work. I wanted to know if the glass could be subject to flare outside of a studio setting. First, we took it out in the evening. The image on camera looked great. I saw no teleprompter ghosting or flare. The script was easy to read. I even had a small curious group of journalists, co-workers, come over and inspect the Autocue iPad teleprompter during my tests. The general feeling from news reporters was one of enthusiasm. They all seemed keen to give it a try for the possibility of not having to memorize their scripts every day.

Then I took the iPad Teleprompter outside on a bright sunny day. There we saw the script on the teleprompter was a little harder to read, which was not a surprise. With the camera and teleprompter, pointing towards the sun I only saw a little bit of flaring. This looked easy to fix with a c-stand and a flag. When the camera was pointed so the on-air talent was facing the sun was when the script was the hardest to read, but still readable. This is not a knock against the teleprompter really. It’s just an environment thing. No teleprompter is going to perform as well on a bright sunny day than in a controlled studio. 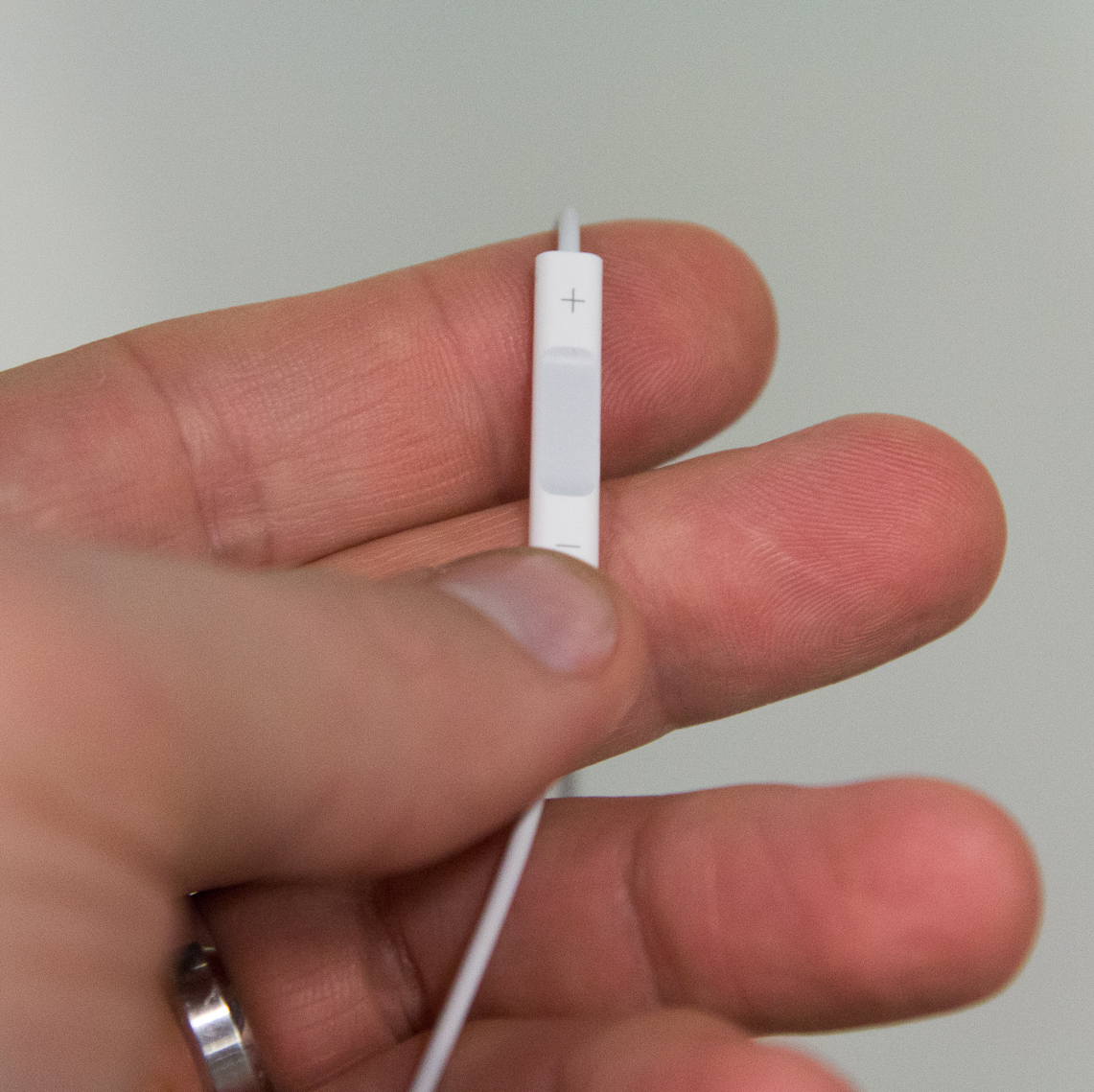 Controlling the speed of the iPad Teleprompter is important. Some talent read fast and others read slowly. Autocue has a few options for controlling the speed of the teleprompter. I used my Apple earbuds on the iPad Mini. With the earbuds, I could tap volume up to speed up the script and volume down to slow the script down. Simple enough, but this requires the operator to be in a position to see the teleprompter. I could see myself controlling the speed this way while monitoring my camera with my Blackmagic 4K Video Assist turned toward the side. It would not be ideal, but it could work. It would be better to have a producer or an assistant do it instead. Then there is another option. Autocue makes an iPad controller. It works in a similar way as earbuds, but with a longer reach. With a longer cord, one could have the talent control the speed of the teleprompter themselves. If they wanted.

In the end, the conclusion I made was the Autocue iPad Teleprompter sped up my shooting schedule. This gave me more time to perfect a shot as well as more time to direct the on-air talent. I was no longer worried about getting the whole script read correctly, or worse, an anchor changing the script so they can memorize it better. I could see this teleprompter on a Dana Dolly without a problem with the weight or size. The Autocue iPad teleprompter was fast to set up and easy to use, and I was not tethered to a second computer or a wall plug. 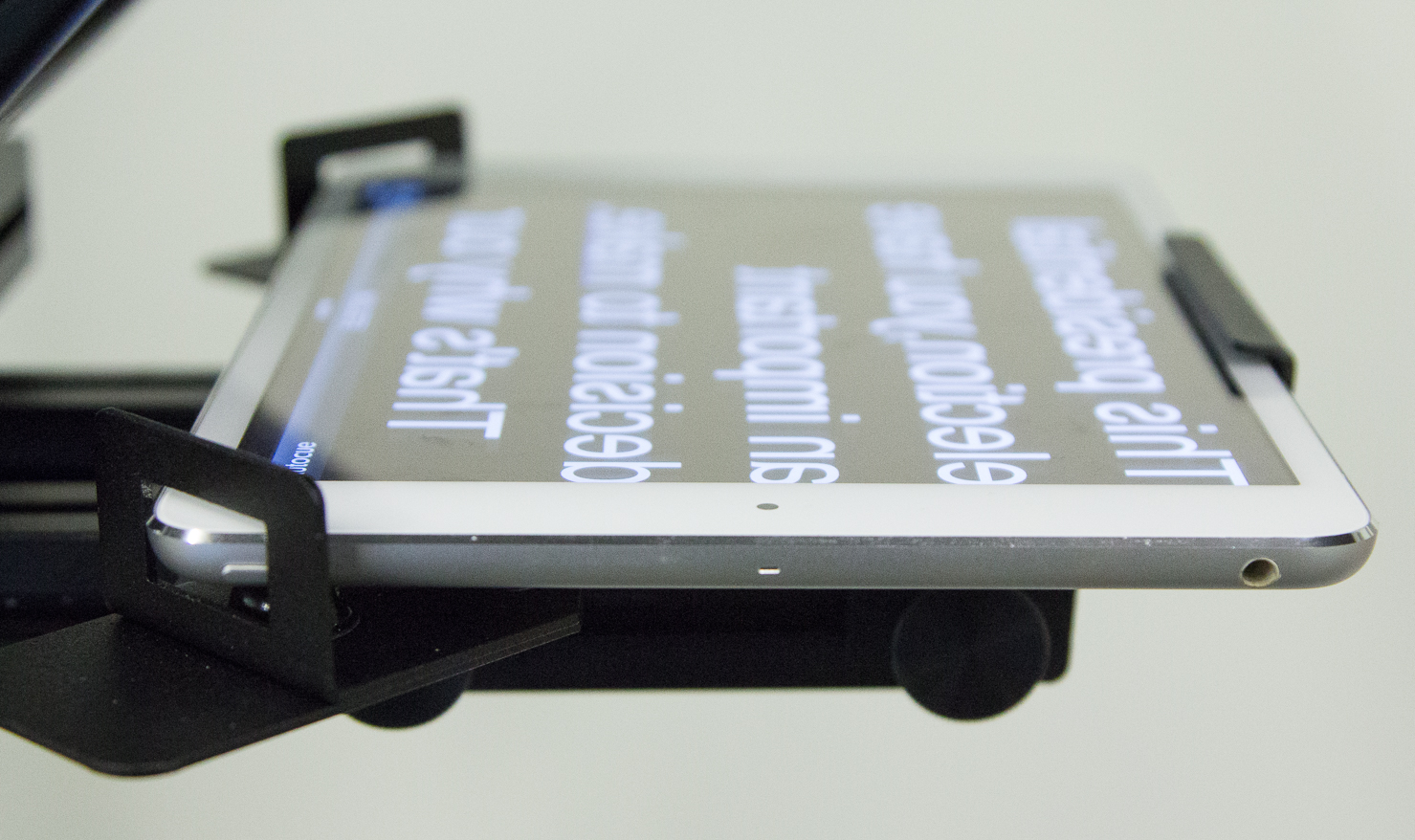