Many HDSLR and mirrorless cameras have very poor audio preamps. We were surprised with the results of the A7s, and also with the Shogun recorder/monitor.

My friend Jorge González and I got together to test the audio quality on his Sony A7s and with the Átomos Shogun 4K/UHD recorder/monitor I’m evaluating. The A7s is now famous for its exceptional low-light performance imaging in 1080p or 4K/UHD —yet dependence on an external recorder for 4K/UHD. The Shogun is equally famous as a 4:2:2/10-bit recorder which receives frequent updates to support more Raw video formats and other features every time we blink. Ahead are the test recordings and the surprising results. 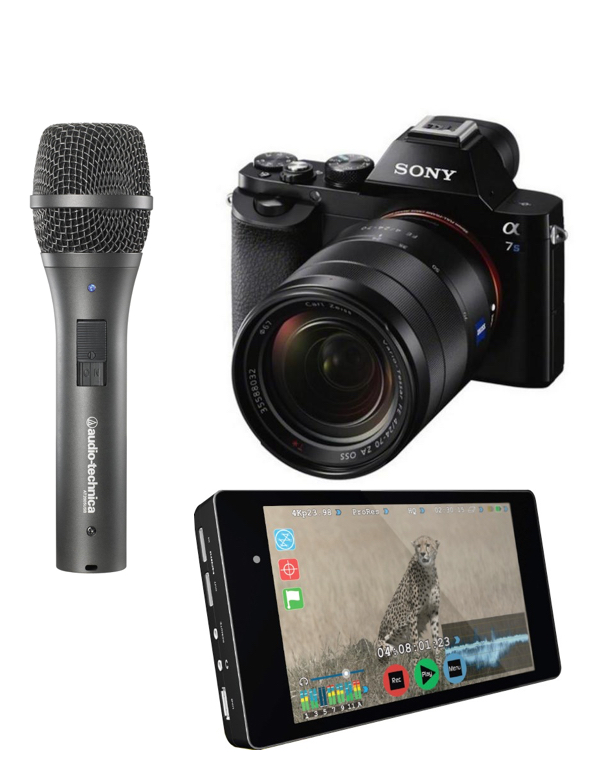 My friend Jorge González and I got together to test the audio quality on his Sony A7s and with the Átomos Shogun 4K/UHD recorder/monitor I’m evaluating. The A7s is now famous for its exceptional low-light performance imaging in 1080p or 4K/UHD —yet dependence on an external recorder for 4K/UHD. The Shogun is equally famous as a 4:2:2/10-bit recorder which receives frequent updates to support more Raw video formats and other features every time we blink. Ahead are the test recordings and the surprising results.

How we made the test recordings

As has been my policy for several years when testing preamps/A-to-D (analog-to-digital) converters, whenever possible, I use a dynamic microphone. The reason is that since dynamic microphones generally have a lower output level, they allow making a true test of the preamplifier, rather than making it easy, as in the case with a condenser microphone, which generally has a much higher output, which means much less work for the preamp.

In this case, we used the analog XLR output from the Audio Technica AT2005USB (reviewed in several articles and ebooks) which was mounted on the Heil PL–2T flexible desk boom.

With the Sony A7s

When recording with the Sony A7s, we used a passive adapter from balanced XLR to unbalanced 3.5 mm on the camera. (Passive means that there is no amplification in the adapter.) We were quite surprised that the preamp in the Sony A7s allowed us to get a decent level at only 50% of the preamp’s gain adjustment via the camera menu. With many other DSLR and mirrorless cameras, a dynamic microphone’s low output would require setting the camera input to the maximum gain setting.

In the case of the recording with the Shogun, we got a double surprise, as explained ahead.

Double surprise with the Shogun

Here are the double surprises:

EMI/RFI encountered and then resolved

When we first tested the Shogun, we had a terrible problem with EMI/RFI (Electromagnetic interference/Radio interference) which we did not have with the direct connection to the A7s. So I contacted Átomos and explained my setup:

Using the exact same XLR-to-XLR cable used to connect the AT2005USB to the A7s (through a passive adapter to unbalanced 3.5mm), the Shogun had to be set to its maximum gain (more details ahead), and picked up EMI/RFI (Electromagnetic interference/Radio interference) that the A7s did not. I made a second test where I put both mobile phones that were in the area into Airplane/Flight mode and moved them very far away, but there was no reduction in the EMI/RFI. The only way that I was able to get rid of the EMI/RFI was to use a condenser microphone, where the input level in the Shogun could be much lower (about +10 dB). I clarified that the balanced dynamic microphone used for the test is the same one —and with the same XLR cable— used to test the A7s, and multiple audio preamps from ART, Audio Technica, Avid, IK Multimedia, Roland, SoundDevices and Tascam, all of which I have reviewed in ProVideo Coalition magazine. It is also the same microphone and cable used to record my CapicúaFM audio podcast, which already reaches over 48,000 listeners in over 125 countries, according to Podtrac Inc., and where I strive to achieve impecable audio quality.

Regarding the EMI/RFI issues, Átomos was confident I had received a faulty Shogun. They clarified that some of the early units had an internal cabling issue which resulted in EMR and EMI measurements not in line with what they strive for. I returned the first Shogun, received a replacement, and the EMI/RFI issues were solved.

Gain issues: reported… and to be corrected with an upcoming firmware update

The Shogun’s current specs indicate that it only offers maximum of +40 dB gain. Currently, the menu input options for audio are:

Sets the analog input channel to pro line level via the XLR inputs.

Sets the analog input channel to consumer line level via the XLR connectors.

Sets the analog input channel to mic level via the XLR input.

Enables phantom power for mic’s connected via the XLR connection.

Since we were intentionally using a dynamic microphone for the reasons explained earlier in this article, we selected Mic Level (–40 dBu). Those are the rough settings. The menu also offers fine gain adjustment which offers to ±20dB. We needed to crank it to the maximum to get a decent level.

I expressed my surprise to Átomos that the nominal mic setting on the Shogun is currently only –40 dBu and not at least –60 dBu. As an example, I cited the US$199 Tascam DR–60DmkII audio recorder (which I reviewed in December 2014), which offers up to +64 dB of gain on its microphone preamps. Átomos responded that sometime soon, there will be another firmware update for the Shogun which will offer –60 dBu nominal.

Even though we had to crank the Átomos input gain to the absolute maximum setting to get a decent audio level, the recording is quite clean, as you’ll hear ahead.

How I processed the files

Both original recordings were video with embedded audio. When we were recording, we thought I’d publish the video and audio. Later, we decided that it made sense to publish them as audio only, for several reasons. In order to extract the audio from the consumer format XAVC Long GOP recorded by the A7s, I extracted the audio in two steps: 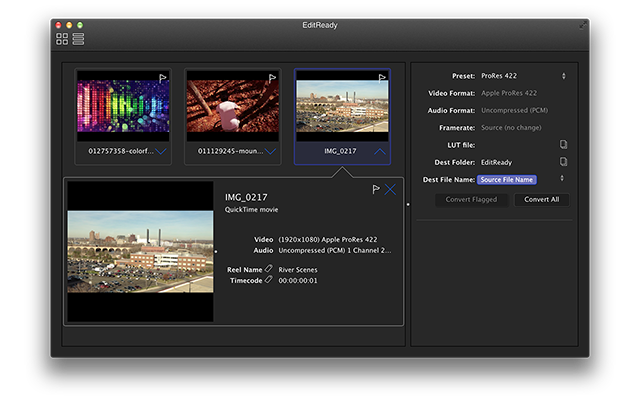 One less step was required with the ProRes 422 file from the Shogun. Since it is already readable by QuickTime Pro 7, I followed the same steps covered above, but skipping the EditReady step. Presently, the Shogun is not capable of recording audio only, although I have suggested that option to Átomos. I don’t know if they’ll add it to a future firmware version.

Thanks to Jorge González

Thanks to Jorge González of Acquest Multimedia for helping record these tests with his A7s.

The A7s surprised me, both with its cleanliness and potential gain. After its EMI/EMR issues were resolved by Átomos, I was glad to know that they will be adding gain in an upcoming update to the Shogun. I am happily surprised as even at the Shogun’s maximum gain, the result was very clean. (Many other audio preamplifiers have hiss and other negative artifacts at their maximum.)

If you have ever heard comparisons of preamplifiers before (mine or those of others), you already know that just like microphones, different preamplifiers have their own unique sound.

I plan to publish another article once the firmare update adds the increased nominal gain for microphones.