We talk about crash cams and career advice

If you are a fan of the 1984 hit horror film “A Nightmare On Elm Street” then you have seen Jacques Haitkin’s work as a cinematographer.  Now, Haitkin has stepped in as the 2nd Unit DP for the 2017 film “Kong: Skull Island.” According to Haitkin’s mini biography on his IMDB page, he is known for “his imagination and skill at helping the director put every dollar on the screen.” Clearly, Haitkin has valuable lessons and tips to share in this Art of the Shot series especially how he helped create some kinetic visuals seen in “Kong: Skull Island.” Considering he’s known to “put every dollar on the screen” I am really interested in his use of Blackmagic’s Micro Cinema Cameras and Pocket Cinema Cameras as POV and crash cameras.

Why turn to the Blackmagic Pocket Cinema Cameras for Kong: Skull Island?

Haitkin: I needed “disposable” cameras or cameras that were affordable enough to be put in harm’s way, but that still provided cinema-quality with 13 stops of dynamic range and 12-bit RAW, in a small body. We invent shots and setups on the fly, so we need the cameras to be small, easy and flexible. I’ve rigged the Pocket Cinema Camera in cages upside down, sideways, set a frame and it stays there…until it’s hit.

How many Blackmagic Pocket Cinema Cameras did the production eventually use?

What codec did you shoot and why? 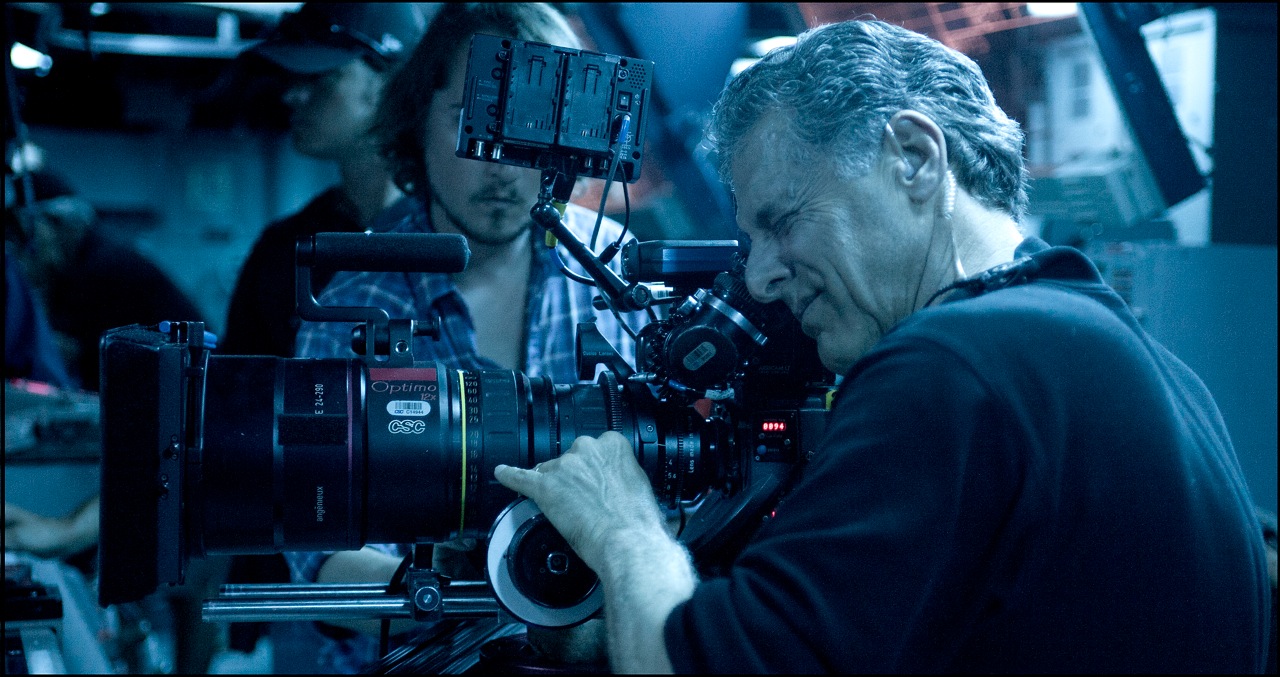 Haitkin: RAW. I can’t have compression, and this is especially important for big action films where there may be multi-layer VFX that have to be applied in the background of crash cam images. Providing the VFX department with RAW images for working with is major, so they won’t have to deal with compression schemes breaking when they try and apply multi-layer VFX to the footage. The Pocket Cinema Cameras give VFX the flexibility of RAW images.

What lenses did you use on the Pocket Cinema Cameras?

Haitkin: Olympus M. Zuiko Digital ED 7-14mm f/2.8 Pro. The Pocket Cinema Camera’s interchangeable MFT lens mount lets me use the specific lenses I want, and because the camera’s sensor is one-quarter the area of coverage of the lens I used on “Kong,” I was effectively shooting with the center of the lens. Using the optical center of the lens, and not the edges, is a big factor for me. The Pocket Cinema Camera’s lens mount coupled with its sensor size lets me use only that sweet spot—which is a substantial optical advantage. That extra level of optical integrity allows for better final quality when blowing up to large, theatrical venues, like IMAX, which “Kong” is.

How did the Blackmagic Pocket Cinema Cameras elevate the visuals for Kong: Skull Island?

Haitkin: By providing shots I couldn’t get any other way.

After shooting with Blackmagic Pocket Cinema Cameras what lessons can you share for future users?

Haitkin: When you want to capture action vantage points in 12-bit RAW that put the camera at high risk, Pocket Cinema Cameras (or ones like it) are the only way.

What was the most difficult shot to execute with the Pocket Cinema Cameras? What was the solution?

Haitkin: There was a practical effect where a helicopter lost control and crashed down 150 ft. onto a tree. We had pyro rigged inside the chopper, so sparks and explosions were going off and branches were crashing as the helicopter fell through the tree.

The Pocket Cinema Cameras were filming inside the crashing helicopter, and it was not a digital effect; it was a real, practical effect. You can’t get something like that any other way, and we could never have legitimatized a more expensive camera to capture that shot, so the Pocket Cinema Cameras got us that unique shot. We knowingly put them where they were going to get wiped out, and they did. It’s the only way I could get that shot; we got it, and it’s a great moment. Outstanding.

Would you use any other Blackmagic Cameras for your next movie and why, or why not?

Since we now have so many different camera options how do you decide on a single brand or camera for a project?

Would the visuals in Kong: Skull Island been achievable when Film cameras were the norm?

Haitkin: In my opinion, not quite. With film, for shots where cameras were at high risk, we’d use 35mm film Eyemos, which are 5 times the cost of the Blackmagic cameras. Also, there’s only a minute of film in Eyemos at 24 fps. So if we run slo-mo, it’s only 30 seconds of running time. That makes getting the shot MUCH more difficult because these cameras are usually rigged in some awkward places. Hence, compromises are made to deal with the limitations. The Blackmagic Camera will run for 20+ minutes, so we just turn the camera on after we rig it and have enough time to get the shot without any time pressures.

How have these smaller digital cameras, like the Pocket Cinema Camera, changed the industry?

Haitkin: Small digital cameras like the Blackmagic’s are faster and easier to rig. And we’re more daring with our creative choices because the cameras are less expensive.

Action filmmaking is always pushing the bar higher, for bigger shots, with more spectacle. And I’m riding that trend, always having to push boundaries. That’s where the Pocket Cinema Cameras come in for me. We can go for any shot we want.

Who succeeds at filmmaking?

Haitkin: Artists and craftspeople who have passion, tenacity, discipline and a positive outlook.

Who fails at filmmaking?

Haitkin: People in it for the money, following the crowd and doing conventional work.

If you were not doing this work, what would you be doing for a living?

Haitkin: Screenwriting. If I couldn’t make movies in some capacity, I have no clue what I’d do. For me, it practically defines me.

Do you have a favorite type of work: Feature films, docs, commercials or music videos? Why?

Haitkin: I like TV and movies because I like illustrating narratives; not selling products or portraying musical artists.

How do you balance work and life?

Haitkin: Good planning. Family and humanity first, work second. But work feeds the family, so work is family. Also, as an artist, you need to feed the creative spirit with living life in all of its splendor. All work and no play make Jacques a dull filmmaker.

If there were one single piece of wisdom to impart on aspiring cameramen/women what would it be?

Haitkin: Often, the most important shots in an action sequence are the close ups. The audience follows a character, and you have an emotional connection with a live human being in that certain situation. It doesn’t even have to be a major character that the audience is already invested in. If you have a close-up of a character’s face intercut with what’s going on around them, the audience emotionally connects with that. This is why POV shots are so important; why I’m always thinking about them and why I shoot a lot of them.

lastly, if you had a say in a new Blackmagic Camera what features would you add or take-away?

Haitkin: Only 2 minor requests. A wireless remote module to be able to change settings without the need to get to the camera physically. The auxiliary power source to run the camera 25 minutes without fear of losing power.