Why trust a camera when you don’t have to?

White balancing a camera is only half the story. Now we have to white balance our lights.

Back in my Betacam days I learned that one of the easiest ways to get myself into trouble was to auto white balance. When I first branched out from film to video–many considered me too young to shoot film, so I made my living off video between film jobs–most of my work was run-and-gun production for various TV news magazine shows. I found that if I white balanced for shade and then had to chase someone into sunlight, all my sunlit footage would appear too warm. It was often better to leave the camera on preset and let the shadows go cool, because that’s what happens in nature anyway. I found that, one way or the other, preset white balance worked on 95% of everything that I shot.

The trick was to find a rental house that established their own white balance presets and did a good job. Manufacturer presets are almost never very good, probably because they are set up in a lab and not in real world conditions. Also, as camera viewfinders were black and white back then, I couldn’t verify the quality of an auto white balance. Some cameras were able to find white within the frame even if the white reference didn’t fill it, but other cameras couldn’t.

I thought these issues would disappear with modern digital cinema cameras. They didn’t. The only cameras whose white balance presets I trust out of the box are the Sony FS7, F5 and F55, and even then only in Cine-EI mode. Arri presets tend to look a bit green, so it’s standard procedure to set the CC value (plus/minus green) to -4ish to compensate. (Any time you see a yellow tint in an image you’re really seeing an excess of green.) Arri’s auto white balance feature, though, is the best in the industry: activating it causes a small white target square to appear in the viewfinder to show exactly what portion of the frame will be sampled, as moving the white reference to fill the frame often moves it out of the light it’s meant to be in.

Most cameras are not this helpful. I’ve been shooting quite a lot with REDs over the past few years and I think they’ve come a long way, but one area where they’re still lacking is auto white balancing. Results are not terribly consistent. As best I can tell, the camera looks for white at the center of the frame but doesn’t ignore the rest of the image. There’s no way to know how much of the frame the white reference must fill in order to eliminate other influences.

Another wrinkle is that lights are not all the same color:

Generally one can mix similar fixtures and get away with it. It’s not a huge deal to mix 3,200K Kinos and tungsten light under most conditions, and many of the phosphor LEDs do a reasonable job of matching tungsten and HMI lamps. Still, I tend to be very careful about multicolored lamps in certain situations, because it’s impossible to un-mix those colors laters.

Because of this, I’ve not only started white balancing cameras manually, but I also white balance my lights manually. 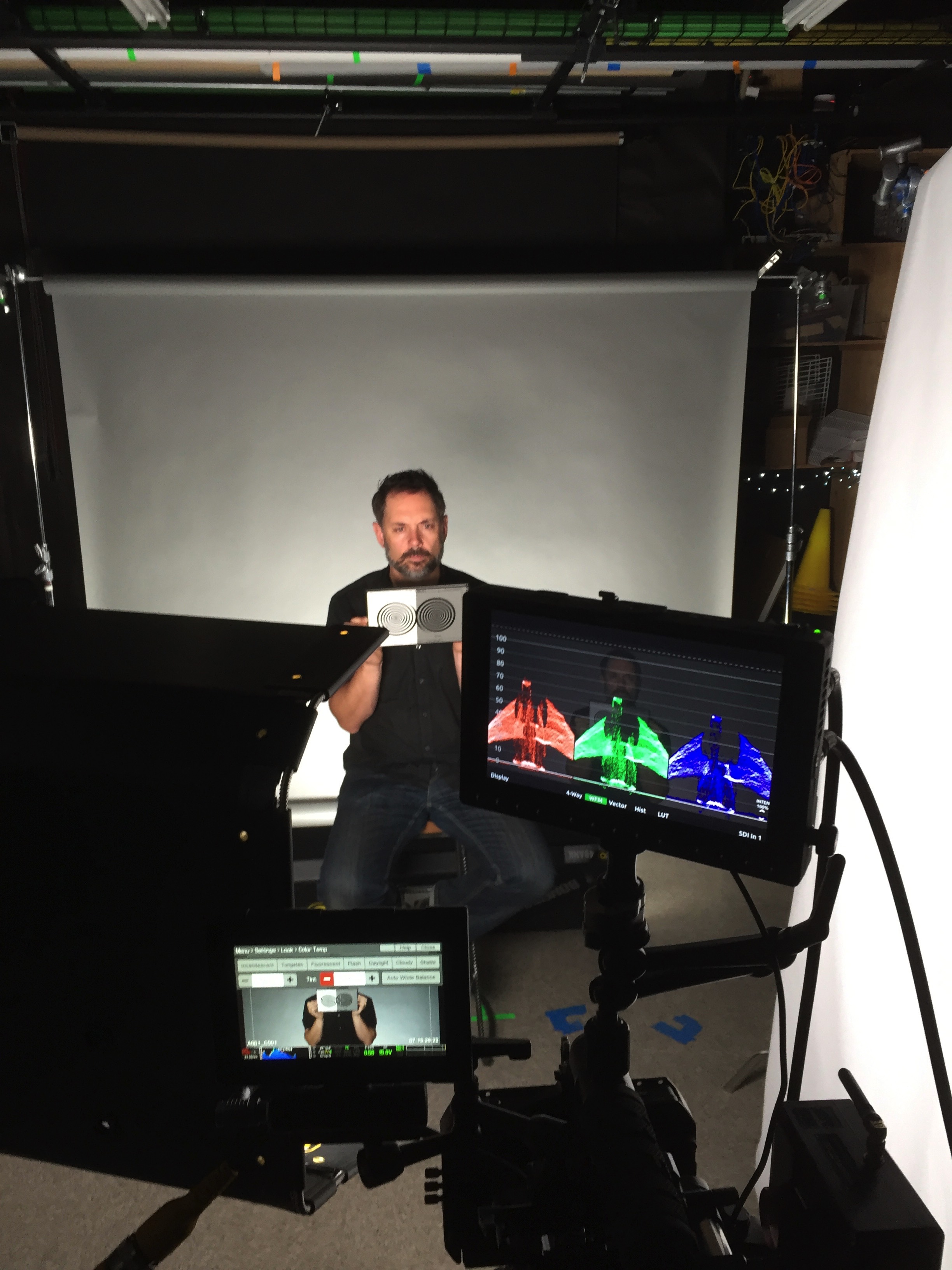 This is camera assistant Jeph Folkins. We recently worked together on a project where we shot 20 testimonials for a large software company. Talking head shoots are easy and hard all at the same time: the area I have to light is fairly small, but the lighting has to be fairly precise as there’s nothing in the frame to distract the audience from a poorly-lit face.

The lighting setup was simple, using mostly lights we found on the stage. The key was an 8×8 piece of grid cloth with three 4’x4 tube Kino Flos and one 4′ Kino Select 31 lighting the top of the diffusion, to create a 4’x8′ horizontal source. That created beautiful horizontal wrap around the face and nose while pushing the nose shadow down into the “smile line,” the imaginary line between the corner of the nose and the corner of the mouth. Immediately next to camera was a Kino Select 21 as a key-side fill and eye light. A soft source near the lens cleans up skin beautifully and can be used to increase or decrease wrap depending on the needs of the subject’s face: round faces need less wrap, while angular faces need more. Most often I have no idea what our interview subjects will look like before they show up, so having some small amount of modeling adjustment near the camera helps considerably.

The trick is that RED’s 5500K preset doesn’t always look that great, especially under broken-spectrum lighting. And all of our fixtures were daylight balanced, but they didn’t match perfectly. For example, the Kino Selects looked a little green to my eye.

That’s where my Pix-E monitor came in handy, as it has a variety of built-in scopes. In this case I was interested in Parade RGB, which is perfect for finessing white balance settings. I handed Jeph my DSC Labs Cambook Mini, opened to the white/gray balance page, and asked him to take a seat.

I turned off the LED Kino Selects in order to white balance the camera to the fluorescent Kino Flos, as they were the dominant light source, and then opened up the camera’s manual color settings. Kelvin color settings only affect yellow/blue (warm/cool). They don’t affect green/magenta, which is manipulated through a separate CC or tint control (different cameras use different names). 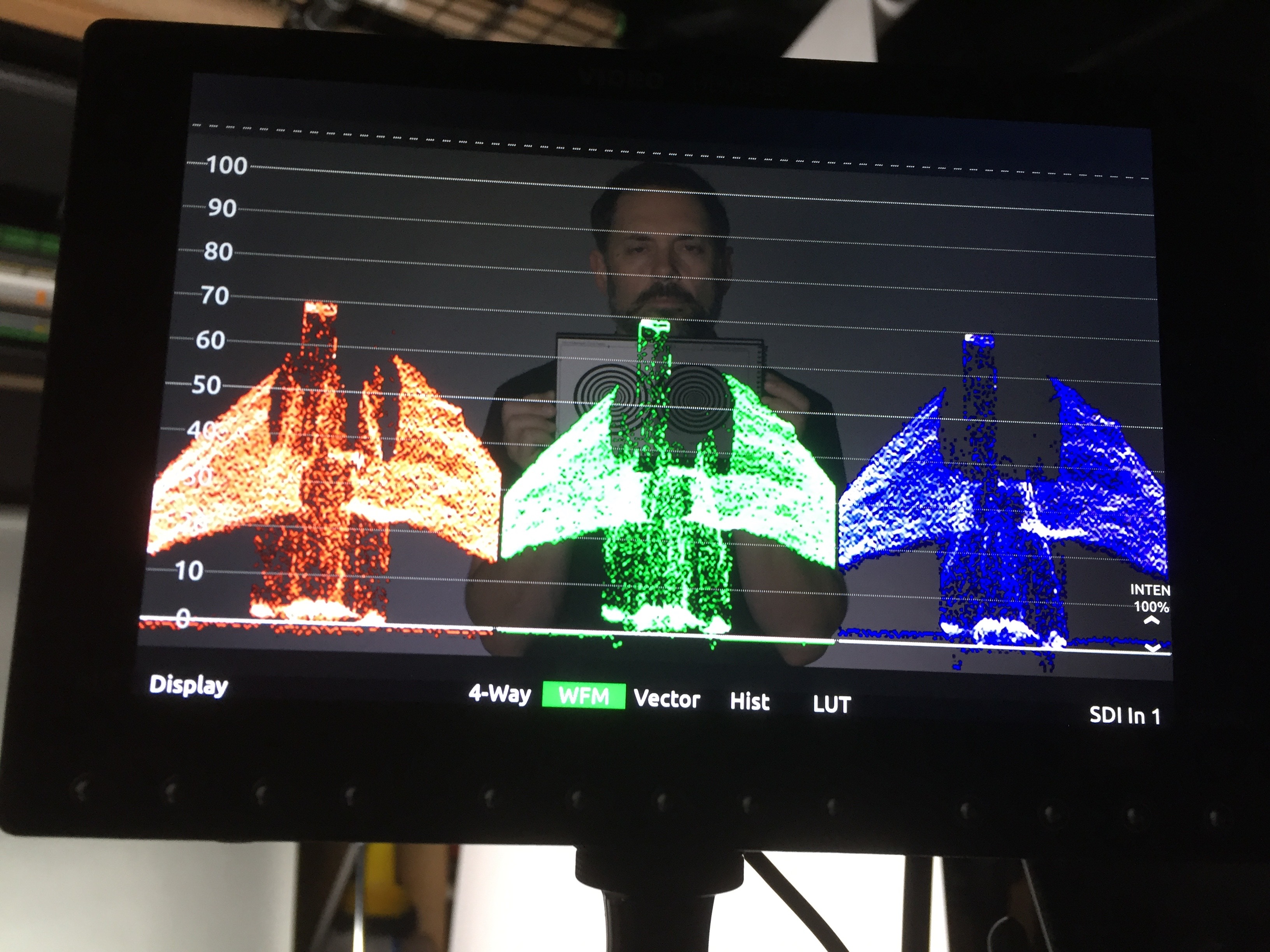 The camera white balance process is:

I don’t expose the white reference brighter than 70% as highlights compress as they move up the gamma curve. Compression means that the differences in the red, green and blue channels are minimized, which makes for a less accurate white balance because correcting compressed highlights may not fully correct differences in mid-tones. Exposing the white reference such that it barely appears white, or appears gray, puts it in the middle of the gamma curve, where there’s less compression and differences in hue are most obvious.

Some cameras prefer to auto white balance on gray instead of white, which is why there’s both a gray reference and a white reference on the same chart. You can almost never go wrong white balancing on middle gray over white. (We should really call white balancing “gray balancing.”)

Here are the final camera settings: 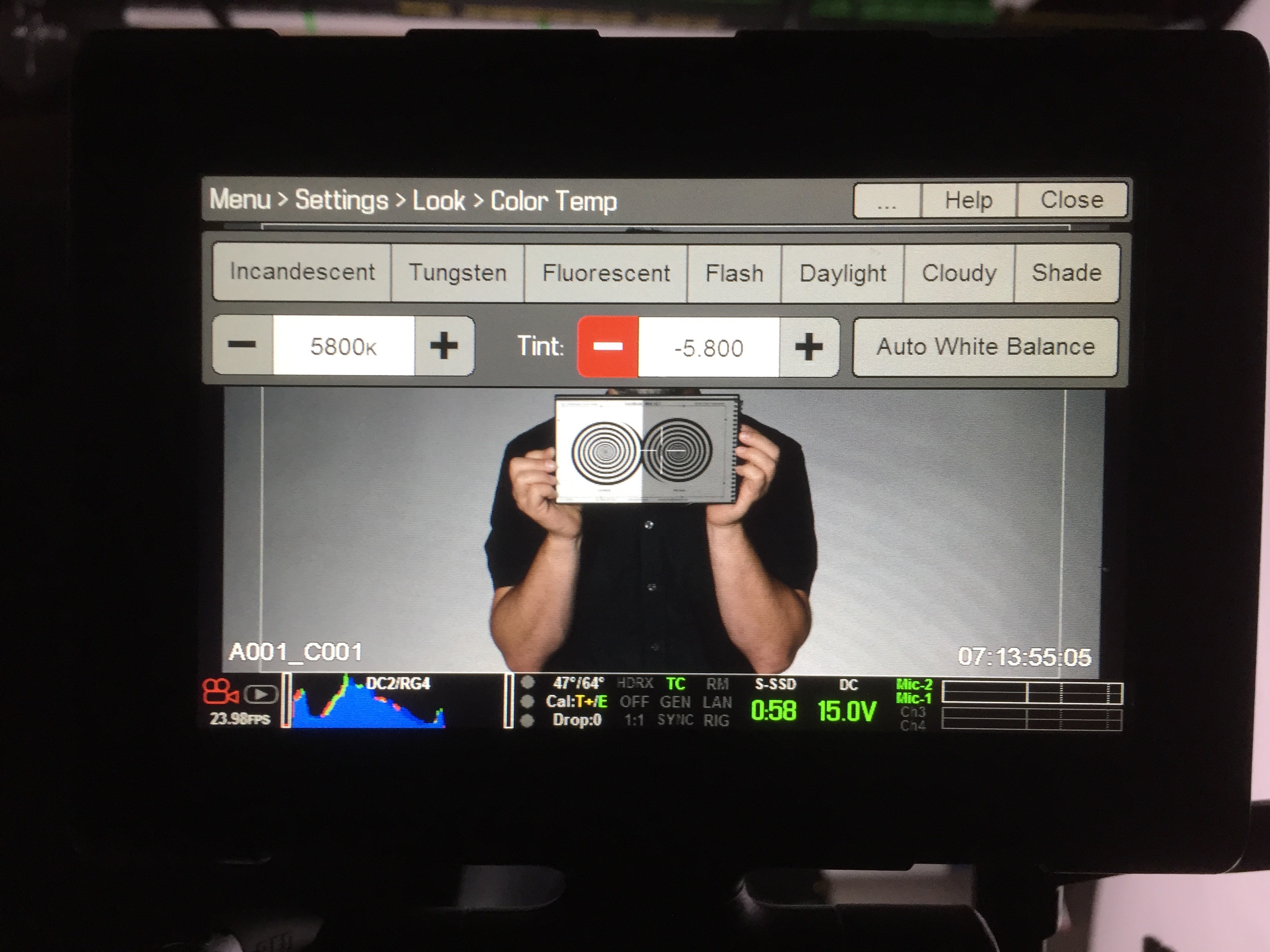 The next step was to turn off the Kino Flo fluorescents and turned on one LED Kino Select. Without changing anything on the camera, I checked Parade RGB to see if it showed the white reference to be neutral. It didn’t, so instead of adjusting the camera, I adjusted the Kelvin and green/magenta settings on the Selects until the peaks lined up again. Then I copied those settings to all the other Selects.

Here are the Kino Select settings that matched the daylight Kino Flo fluorescents: 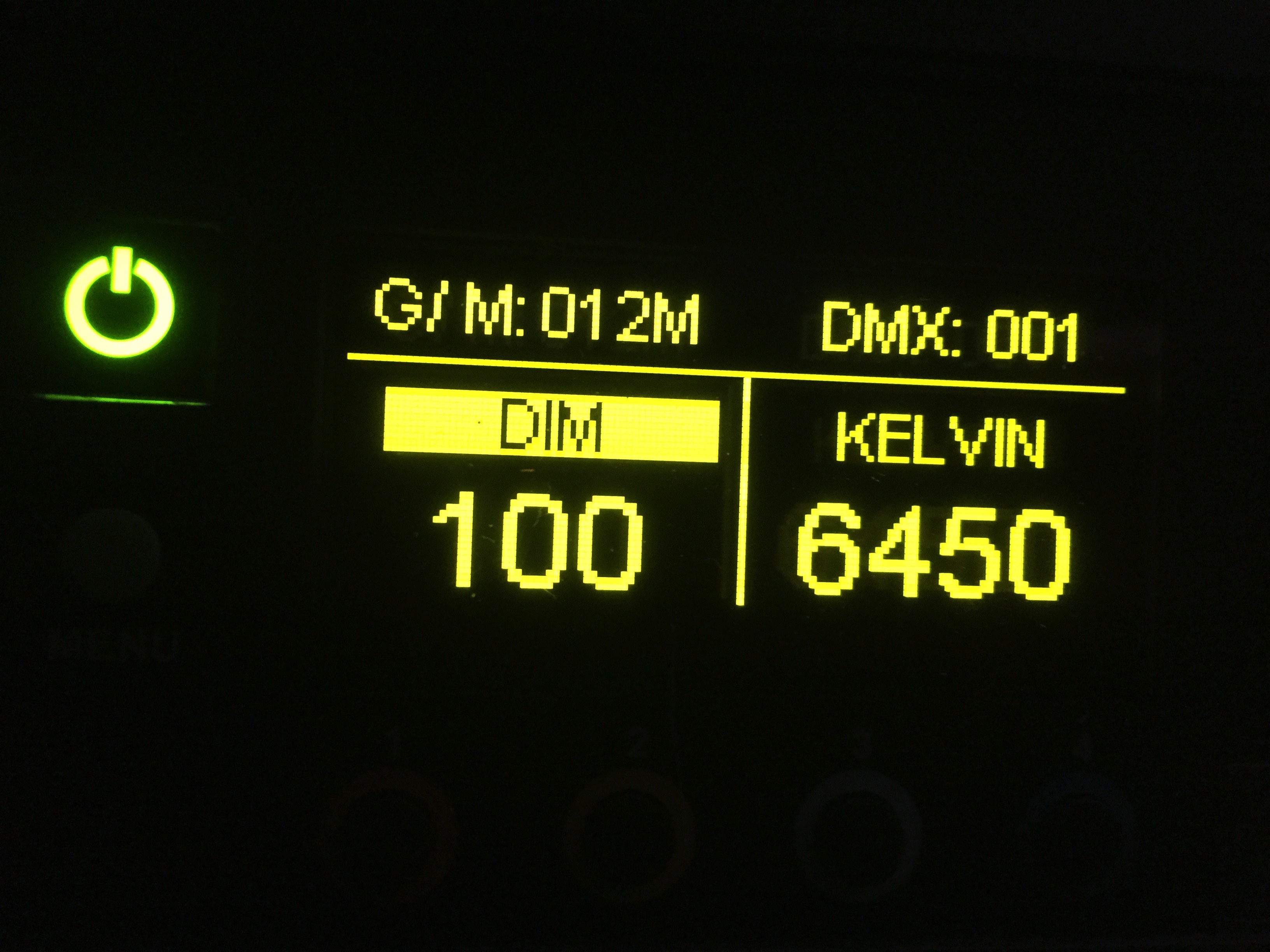 As you can see, I had to run the Selects cooler and with a bit less green to match the Kino Flo tubes.

In the end I made my camera assistant look great, and if I can make a random crew person photogenic then I know that the actual subjects will look fabulous. 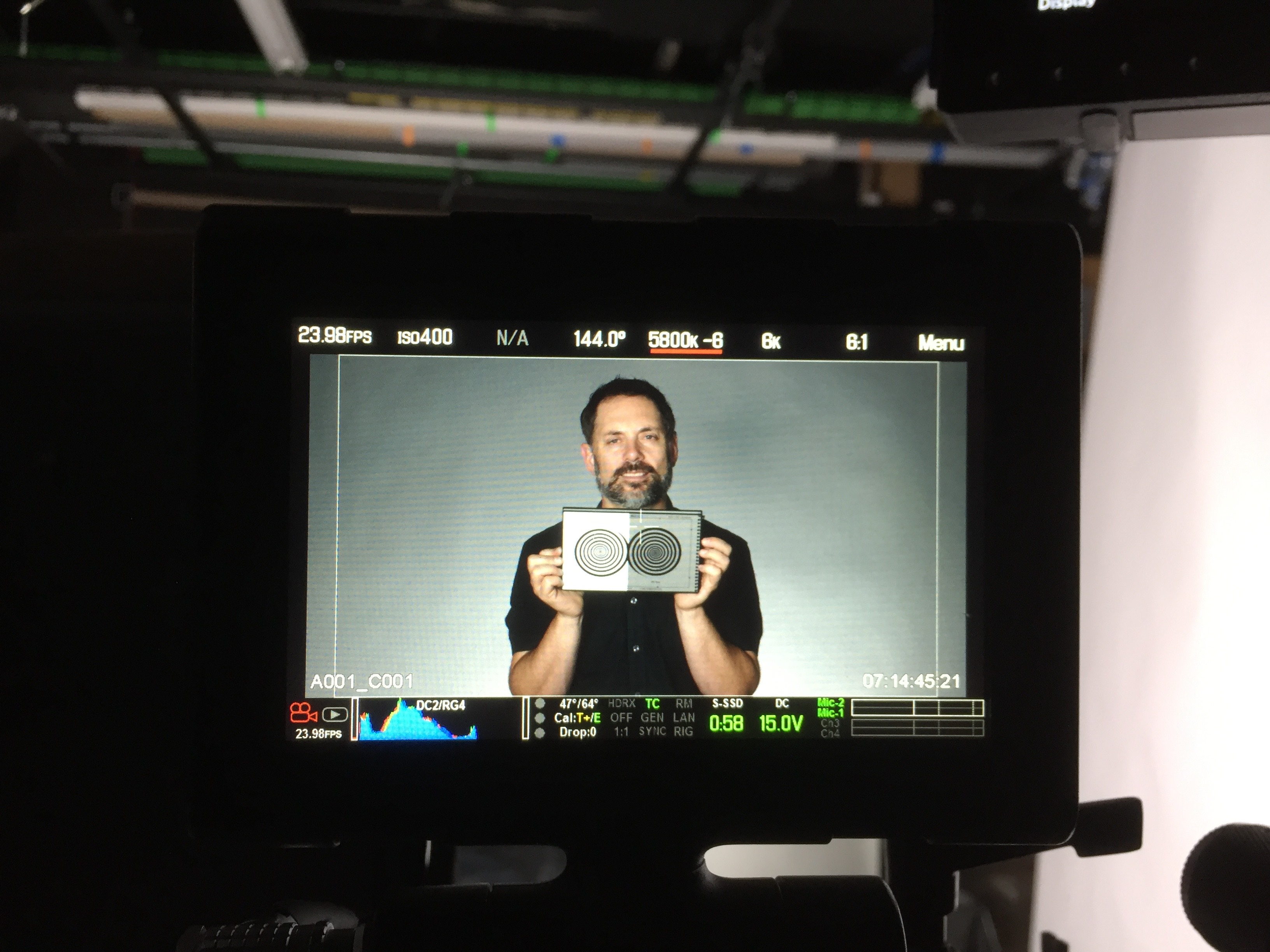 This trick works well in a lot of different environments, especially on location where I can’t swap out bulbs. I use it most often in settings lit by cool white fluorescents, as I’ll white balance to the existing fixtures and then gel tungsten lights to match using these same techniques. I’ll add CTB and plus green gel to a tungsten light until Parade RGB shows a close match (usually half CTB and 1/4 or 1/2 plus green), and then use that gel pack on all the other tungsten lights. I don’t have to turn the overheads off during this process as I can overpower them by spotting the tungsten light on the white reference and stopping down. (Light sources with broken spectra, like Kino Flo tubes and LEDs, need their own gel packs as gels are meant to work with full spectrum sources, like tungsten and HMI light, and can be a bit unpredictable when used on other sources.)

Disclosure: I have worked as a paid consultant to both Sound Devices and DSC Labs.