Most cameras have issues with far red or infrared. There are lots of filters to fix that, but you have to use the right one for the right camera. Read on to see what works with Alexa.

Last night I had the chance to–finally!–touch an Arri Alexa at Chater Camera’s Alexa preview party. And, being a curious sort of fellow, I decided to run some impromptu tests. IR tests are the easiest to do so I quickly did some–and in the process learned some interesting things about Alexa. 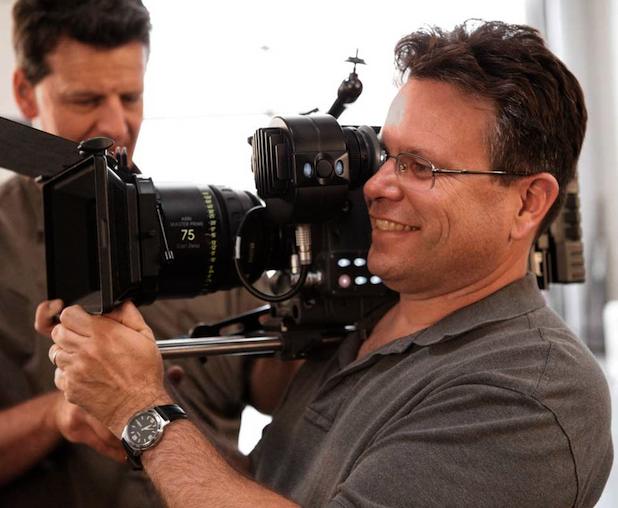 I handhold an Arri Alexa prototype at Chater Camera’s “Welcome to Alexa” event last Monday evening. John Chater puts the camera on my shoulder so I can enjoy the feel of a perfectly balanced camera.

Michael Bravin of Arri brought us an Arri Alexa prototype with a working ProRes recording module, so I happily shot my tests to ProRes422(HQ) and carted them away. I have to say that I have never had an easier time getting footage into Final Cut Pro.

I’ve received some complaints lately that some of my articles are too hard to follow. Several people have requested “executive summaries.” Okay, here it comes: the IR filter that you’ll need when using Alexa is:

The Arri Alexa seems to respond to non-visible red light in much the same way that the Sony F35 does, and probably for much the same reason: the color red has been, for a long time, the bastard stepchild of television. In the NTSC days we used to issue wardrobe instructions that stated “No white, black or red!” White and black were difficult tones to reproduce accurately, since exposing for flesh tones usually made white too bright and black too dark; and bright red was known to smear disturbingly when broadcast. The red phosphor used in early televisions wasn’t bright enough to compete with the blue and green phosphors, so some green was added to the red phosphor to “pump it up.” This resulted in–you guessed it–orange-ish reds.

Real red was almost never seen on television. And when it was seen, it was feared. The color red, in the old days, never got no love.

The first time I fired up a Sony F35 I was standing next to video engineer Jim Rolin. The camera was aimed down at a Persian carpet and Jim exclaimed, “I’ve never seen so many hues of red from a video camera before!” Sony built the F35 for digital cinema, which didn’t have the color gamut restrictions imposed by earlier analog broadcasting standards, and all the colors were rich and beautiful without being oversaturated–especially red.

Arri has done much the same thing here: they’ve pulled out all the color stops. But when you do that with red there are certain… side effects. 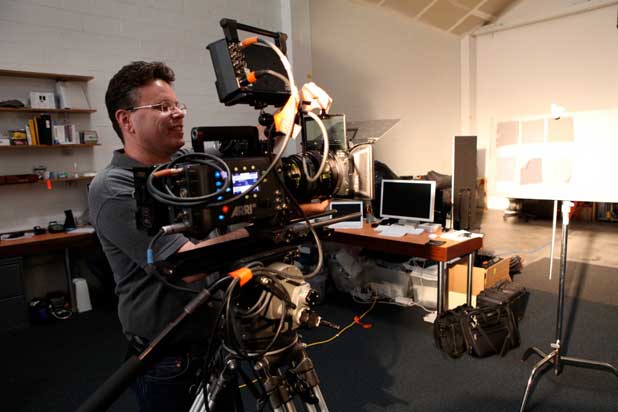 Filter tests with an Arri Alexa prototype at Chater Camera. To the right is my (as yet un-patented) IR/far red test chart.

Far red is not infrared. Infrared is heat, and every silicon sensor ever made is primarily sensitive to heat. It’s just a fact of life: given its druthers, silicon sensors would rather function as IR imagers because heat is what they see best. Humans, on the other hand, don’t see heat at all, so we cut off the portion of the spectrum silicon loves most (above a wavelength of about 750nm) and keep the rest. From the perspective of a piece of silicon it’s a bit like keeping the gravy but throwing out the roast beef, because we can taste the gravy but not the beef.

Far red is a color that is on the very edge of the visible spectrum. It’s just above red and it’s a color that humans don’t see easily, if at all. Most modern cameras, such as the F35 and likely the Arri Alexa, have an IR cut filter that chops off the spectrum starting at around 700nm, where the visible spectrum (and the ITU-709 broadcast standard) ends, and that eliminates infrared contamination that starts at around 750-800nm. But there’s a little sliver of far red, just below that range, that, if amplified, shows up in certain types of synthetic fabrics and clothing dyes.

What’s the best way to amplify a color like far red? Put a filter in front of the lens that blocks visible light, requiring the stop on the lens to be opened. Opening the stop brings the level of visible light back to normal but boosts far red, because far red was never cut to begin with.

That filter is called a neutral density filter. You may have heard of it. Other than a polarizer there is probably no type of filter that is more used in front of lenses.

ND filters block visible light only. They have no effect on non-visible light. The stronger the ND filter, the more visible light is blocked and the more the lens stop is opened to compensate–which lets in more far red.

Let’s look at some actual pictures on the next page…

These images were recorded at EI 800 to ProRes422. I used Final Cut Pro’s three-way color picker to set a white and black balance: white was the sheet of paper on the right, and black was the black fabric at the top right of frame. I looked at all the filters through the camera first, and then shot them slightly out of sequence, so please pardon the messy on-screen notes. 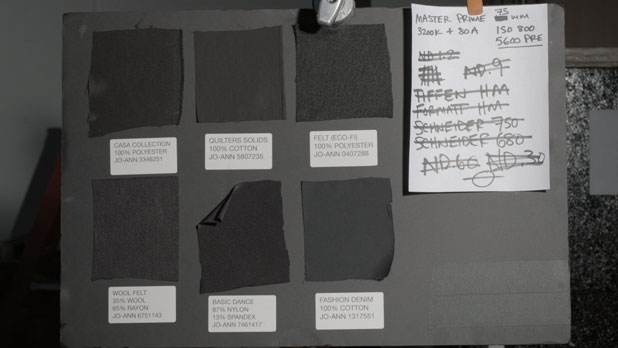 Here’s my IR fabric chart with no ND. The blacks are lifted to about 20-30% on a waveform monitor, depending on the fabric patch, which overemphasizes whatever effect far red has. The top middle patch, “Quilters Solids,” shows a little bit of far red contamination, but under normal conditions this fabric would be rendered so dark that this tonal shift would probably be unnoticeable. 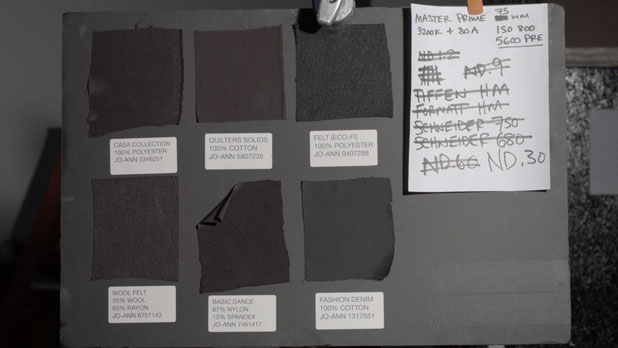 Here’s the same chart with a Tiffen ND .30 filter. We can definitely see some red in the middle two patches, with a little red visible in the left column of patches as well. The two patches in the right column are “controls”: they tend not to reflect far red and always remain black. (Note the variety of fabrics that do, and don’t, reflect far red, depending on either the type of fabric or the dyes used.) 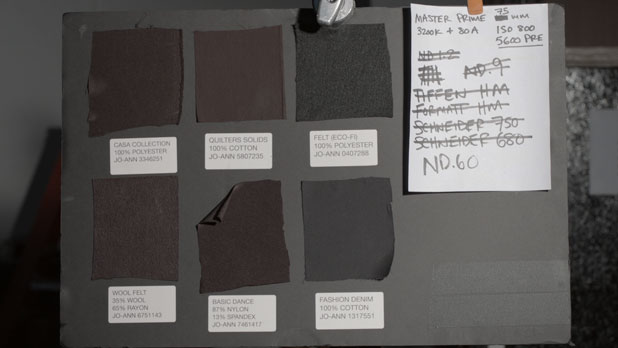 With a Tiffen ND .60 filter the far red contamination becomes even more apparent. Note that this is not an overall color shift introduced by the filter, as only some of the blacks are changing color. 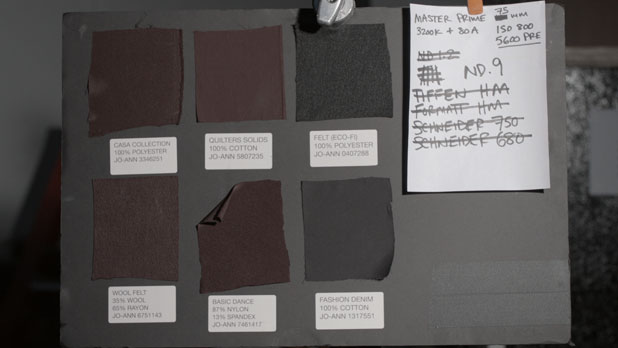 An ND .90 filter reveals some fairly serious changes in color. This is more-or-less consistent with what you’d see under the same circumstances with the Sony F35, EX1 or EX3 cameras.

I then put an ND 1.2 (four stop) ND filter in the matte box, to further stress the camera, and started running through hot mirror filters. Hot mirrors use dichroic coatings to very precisely eliminate specific wavelengths of light. Heavy dichroic coatings change color when viewed at an angle, which is why some of the filters with the heaviest coatings, that work the best against IR and far red, are unusable on wide angle lenses as they’ll turn the edges of the frame cyan, where the angle of view through the filter is the most extreme. 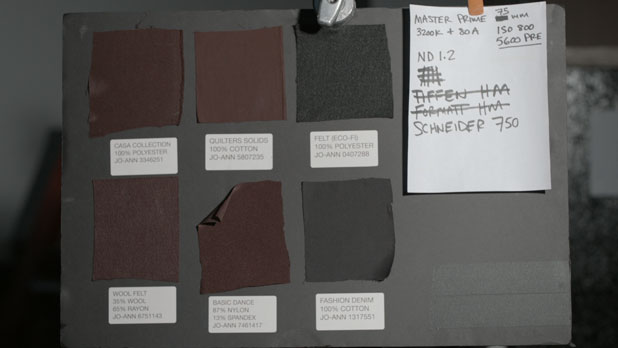 This is the Schneider Tru-Cut 750. This filter works great on the RED ONE, but not so good on the Alexa (or the Sony F35/EX1/EX3). Its light dichroic coating cuts too high in the spectrum, way above where the Alexa’s problems lay. 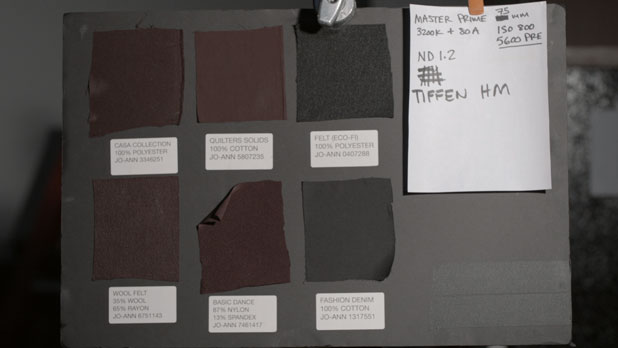 Here’s the Tiffen Hot Mirror. This is also an excellent filter for the RED ONE, but its cut is still too far above the Alexa’s on-sensor cut. 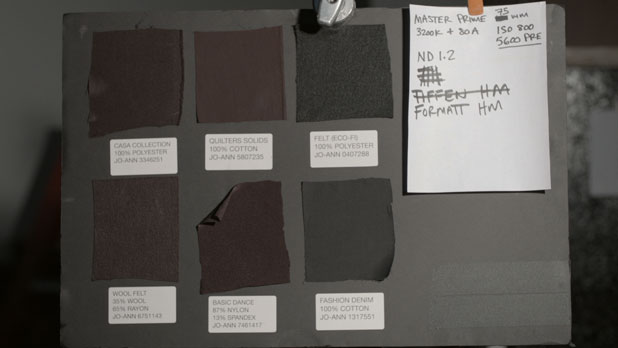 This is the Formatt Hot Mirror. Its dichroic coating is a little heavier, as seen in a slight cyan shift around the edges of the frame when using a wide angle lens, which makes it less friendly artistically but better at cutting far red. Its lower cut removes a little bit more far red than the Tiffen Hot Mirror does.

And now, the filter you’ve been waiting for: the Tiffen T1: 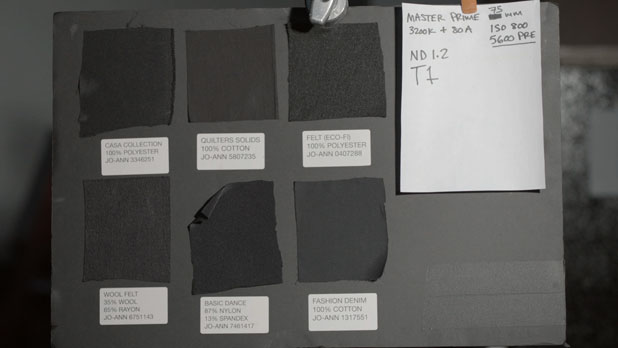 All gone. That’s pretty amazing, especially when you compare it to this filter, the gold standard of IR cut filters: 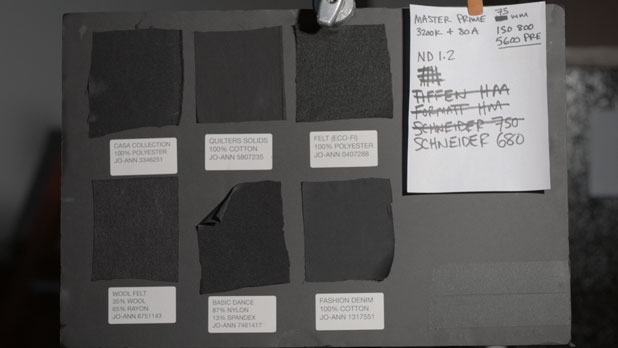 This is the Schneider Tru-Cut 680. You won’t see many of these around because, while they work brilliantly, they use a very, very heavy dichroic coating that vignettes obviously on even slightly wide lenses. It’s a great reference filter but not very usable in the field.

What is so interesting about the Tiffen T1 is that it is NOT a hot mirror (dichroic) filter. Remember, the Arri Alexa already has an excellent hot mirror filter on its sensor already, so unless we want to add a heavier dichroic filter in front of the lens and risk color shifts around the edge of the frame, hot mirrors are not the way to go with this camera. What Tiffen seems to have done is to create a color dye filter that passes most of the visible spectrum without passing the one sliver of spectrum that causes these fabrics to change color. That’s a pretty amazing feat when you consider that dye filters deal in subtractive color: they absorb colors that are not their own, and pass the rest. 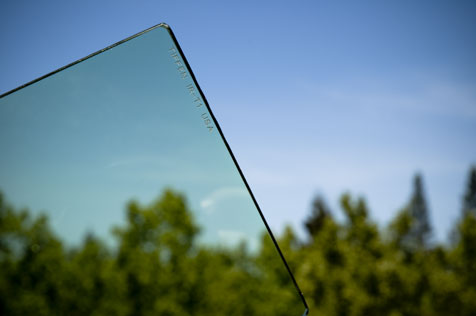 How Tiffen managed to create a filter that absorbs that one little bit of spectrum while passing the rest is beyond me, but they did it without using dichroic coatings which means no risk of color vignetting. Use this filter just as you would any other color filter.

I asked Arri’s Michael Bravin why they didn’t just put a 680nm cut filter on the sensor and wipe out this far red contamination once and for all. His answer:

Eliminating all far red through the use of a very low cut dichroic filter on the sensor can have a devastating effect on flesh tone. The T1 rebalances colors to prevent far red from overwhelming far red-reflective fabrics and dyes while protecting and preserving flesh tones.

If you’ve already invested in 4×5.6 Tiffen T1 filters, or a set of Tiffen IR ND filters, for use with the Sony F35 or Panavision Genesis, you should be good to go with the Arri Alexa. If you’d like to learn how to preview fabrics for IR/far red contamination without actually looking at them through a camera, click here.

Disclosure: nearly every filter manufacturer in this article has sent me filters, for free, to test, and they’ve allowed me to keep them.

Thanks very much to the crew at Chater Camera (owners John Chater and Jay Farrington, prep tech Mecky Creus and office manager Erin Anderson) for a great show and some reasonably flattering pictures.

Thanks also to Michael Bravin of Arri for indulging me in my tests, and to Arri, for making a camera I can’t wait to use.

Art Adams is a DP who, under certain circumstances, really likes to see red. His website is at www.artadams.net.