After extensive testing, ARRI quality control has approved the final production software for the ALEXA Mini LF. The first cameras with the new software star shipping September 18, 2019. Get ready! 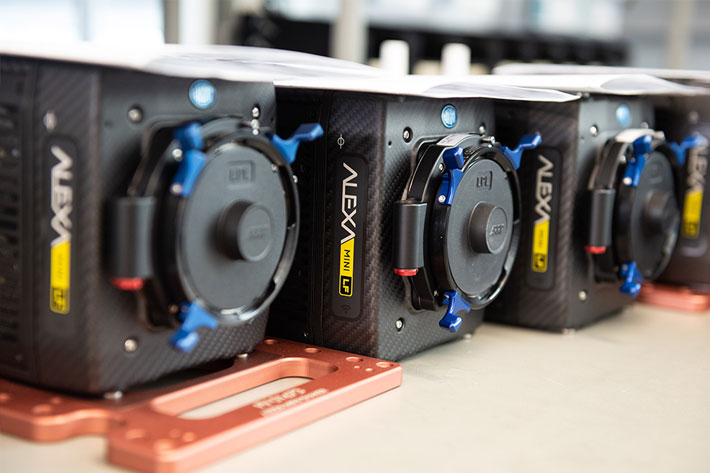 Pre-production cameras have been used on high-end productions, now it is time for the final product to be sent to customers. The new ALEXA Mini LF with final software is prepared to conquer the world.

The first to receive a working prototype of the ALEXA Mini LF was multiple-award winning cinematographer Roger Deakins CBE, ASC, BSC. He used the ALEXA Mini LF together with ARRI Signature Primes, and ARRI TRINITY camera stabilizer system on the World War 1 epic “1917.” Roger Deakins: “The image that the Mini LF and the Signature Primes produce seems, to me, more like what my eyes see than anything else I have experienced so far.” 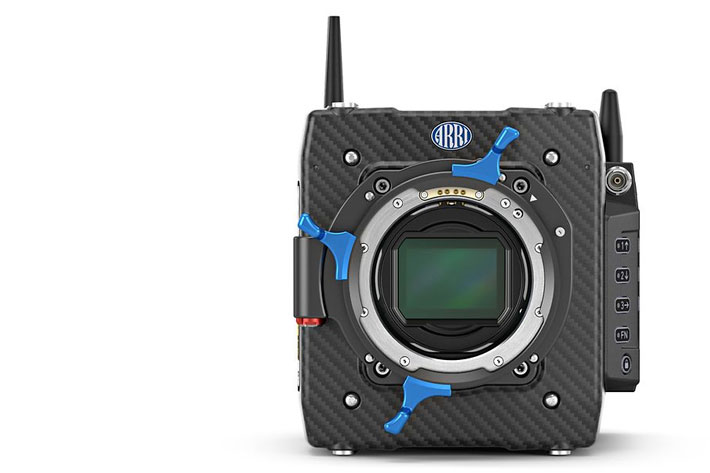 Greig Fraser comments: “Using the ALEXA LF gives me a greater dimensionality, a combination of a bigger field of view, and a shallower depth of field. I easily could push the ALEXA LF to 2000 ASA with no visible noise but a very pleasant texture. The Mini LF has made possible what I thought was previously impossible with large-format photography. The freedom it allows me as a DP, to move the camera in whatever way I feel is best, is unbeatable. Congratulations on successfully and constantly pushing the boundaries in technology, making my job even more exciting!”

The two movies mentioned would suffice to demonstrate the potential of the camera, but more pre-production cameras  were distributed by ARRI to be used on high-end productions. The big Hollywood feature film “Kung Fury 2,” directed by David Sandberg and lensed by Tom Stern ASC, AFC is a crazy action-packed production that calls for a small camera. Shooting has commenced with an ALEXA Mini LF and ARRI Signature Primes. “The new Mini LF: Less, much less, in many respects; especially weight and size but not less powerful than its big sister, the ALEXA LF, in image quality. Truly, for a cinematographer, less is now more,” says Tom Stern. On the ARRI Signature Primes he adds: “I really like the Signature Primes. Super MTF, but not too sharp or full of contrast. They are extremely fast and have a great flare resistance!” 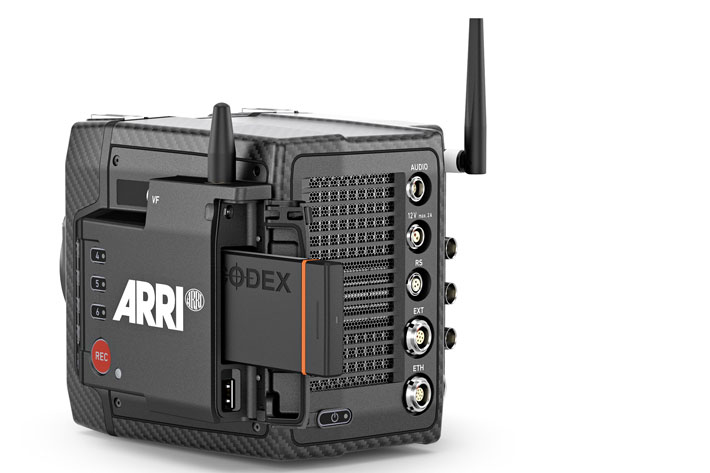 From sports to Outlander

The list continues, and to capture the excitement and fast-paced action of volleyball, cinematographer Zhao Xiao Shi and director Peter Chan chose an ALEXA Mini LF, ARRI Master Primes, and Leitz Thalia lenses for their new biopic “Chinese Women’s Volleyball.” Zhao Xiao Shi mentions: “ALEXA Mini LF has the same super excellent image quality as ALEXA LF, but with a more compact and lightweight camera body, very similar to ALEXA Mini. We are shooting a feature film about sports and there are many moving and handheld shoots, so the Mini LF really helps us.”

Next on this list comes “Outlander Season 5”, by cinematographers Stijn Van der Veken and Alasdair Walter. “Outlander” is a vastly popular TV series based upon author Diana Gabaldon’s historical time travel books. Shooting on locations all over Scotland, co-cinematographers Stijn van der Veken ASC, SBC and Alasdair Walter employ ALEXA LF cameras, an ALEXA Mini LF, and ARRI Signature Prime lenses. Stijn van der Veken comments: “The wedding between LF sensor and Signature Primes is such a winner for me – velvet skin tones and still great crispy eyes. The LF sensor and the Signature Primes got me through a couple of difficult night shoots on ‘Outlander 5.’ I had to push the camera to 3200 ISO with almost no noise while the Signatures kept a brilliant contrast all the way to a wide-open stop. I have never seen this before!” 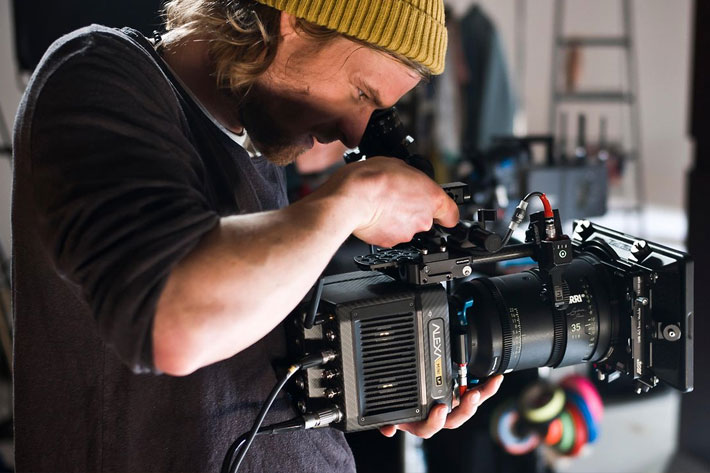 “La Bonne Épouse” by cinematographer Guillaume Schiffman and camera operator Benoit Theunissen is another name to add to the list of pre-production ALEXA Mini LF cameras used. “La Bonne Épouse” (English title: “How to Be a Good Wife”) is a comedic drama by Martin Provost, featuring Juliette Binoche and recounting the female condition in the 1960s.

Cinematographer Guillaume Schiffman AFC chose ARRI’s large-format camera system, consisting of ALEXA LF and ARRI Signature Primes. This setup integrated seamlessly with a pre-production ALEXA Mini LF for Steadicam shots by camera operator Benoit Theunissen. “Large-format has an immersive beauty with a rich image texture. I chose to match it with ARRI Signature Primes for their beautiful smooth skin tones and wide range of focal lengths,” said Guillaume Schiffman earlier this year. Benoit Theunissen adds: “It’s the perfect tool in the way of a light, large-format camera body and it looks and feels just like the ALEXA Mini I’m used to! A great evolution in the ARRI camera family!” 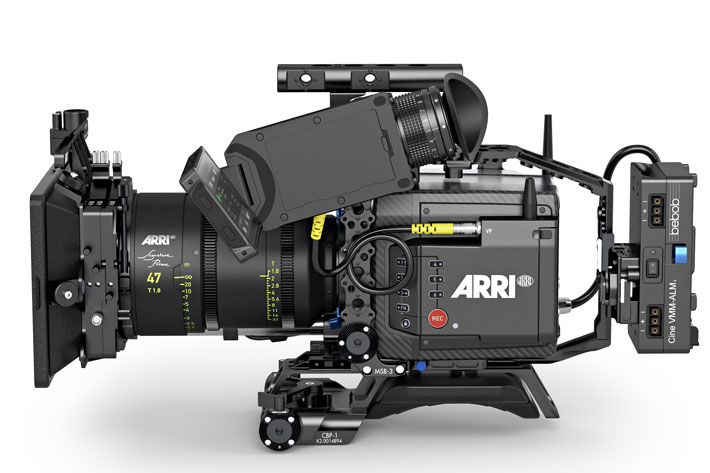 From Australia to Africa

Even a commercial, “Qantas 100th Anniversary”, chose one of these cameras. Qantas, Australia’s largest airline, will celebrate its 100th anniversary in 2020 with a global ad campaign using images created by cinematographer Jeremy Rousse ACS and director Kiku Ohe with ALEXA LF and ALEXA Mini LF. DP Jeremy Rouse comments: “The ALEXA sensor has been my preferred choice for naturalism, skin tone, and general color. With a project of this scale, the director and I agreed large-format would give us high-resolution landscapes and beautiful portraits, but we also wanted a camera that I could just pick up and be improvisational with. We tested many and agreed the combination of ALEXA LF and ALEXA Mini LF was perfect for the job.” 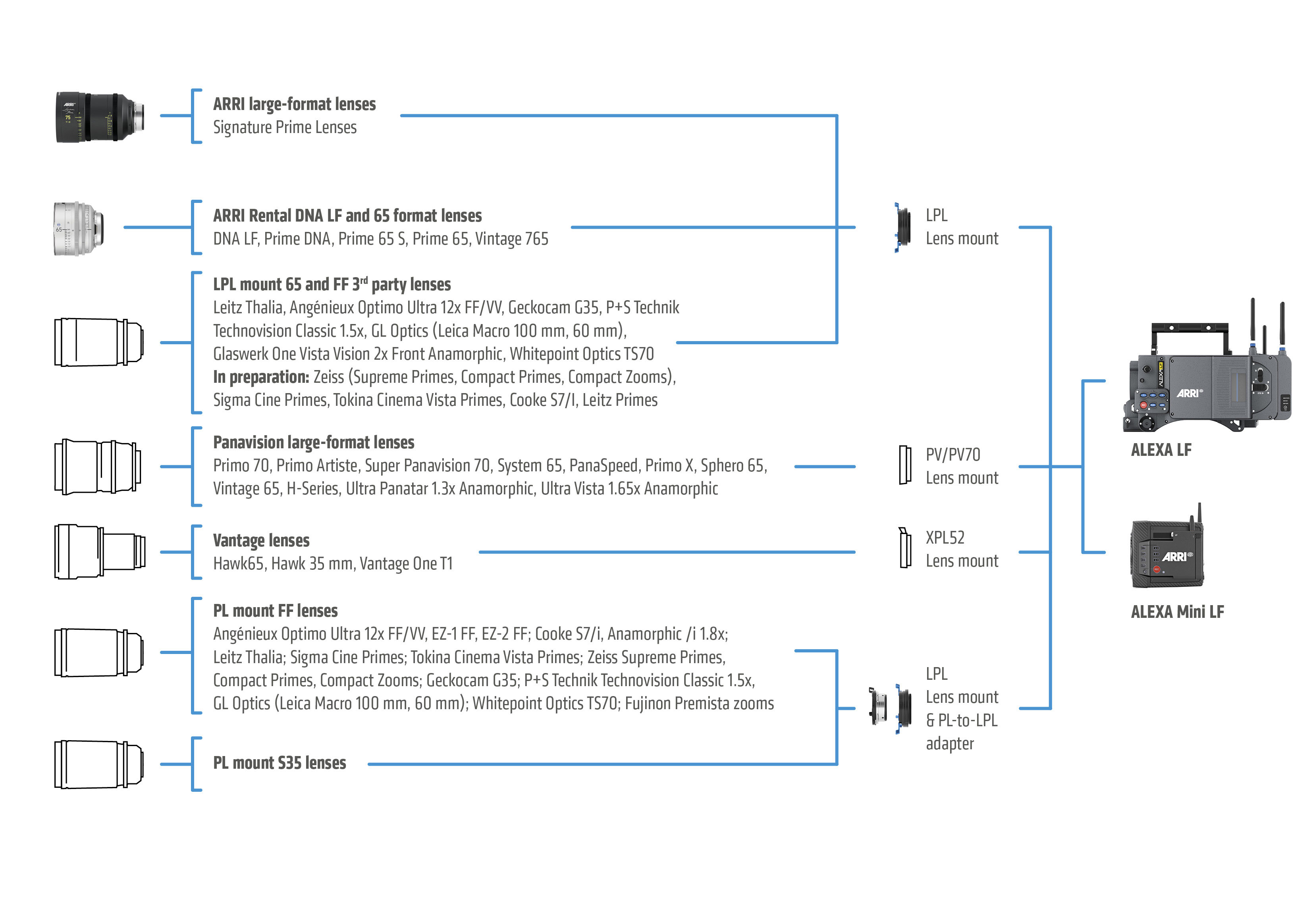 Director Kiku Ohe adds: “This is a global campaign for one of Australia’s great brands, so the scale and dimension of the large-format aesthetic just felt right. I am inspired with the optical dimension and depth to the imagery we are crafting; it’s serving both the story and its characters in a way that feels true.”

The last name on this small selection of projects is “Nomad”, by cinematographer Kevin Garrison. For Taron Lexton’s independent feature film “Nomad,” cinematographer Kevin Garrison travelled to 25 countries on seven continents. Having started their shoot with an ALEXA LF with a spectacular solar eclipse capture in Chile, the production moved onto Australia and Africa, where their pre-production ALEXA Mini LF caught up with them. 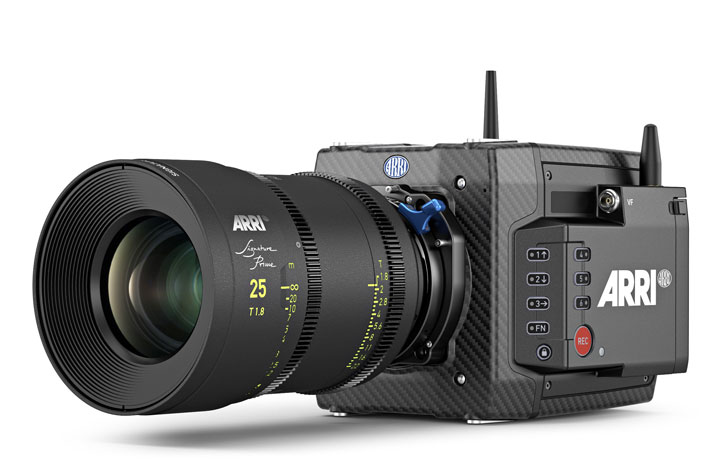 Large format is taking off

Kevin Garrison on ALEXA Mini LF: “The Mini LF is the perfect camera for our project: a small-budget independent film that’s shooting for massive, epic imagery. We travel a lot and with the Mini LF we can use a camera in places where a much bigger body just wouldn’t have been possible. Plus, it is very reliable; we’ve been running it all day in some crazy environments out here in Africa – dust and sand blowing with crazy wind 14 hours a day, unreal heat and cold.”

All these pre-production cameras can be updated by downloading and installing the new software for them. The camera shipping this September to cinematographers around the world will be ready with the new software already installed.

“Large format is taking off now,” says Stephan Schenk, Managing Director of ARRI Cine Technik and responsible for ARRI’s Business Unit Camera Systems. “In 2018, when we introduced the ARRI large-format camera system with the ALEXA LF camera, ARRI Signature Prime lenses, and LPL lens mount, the production community was excited to try something new. By now, many have worked with the ALEXA LF and are appreciative of the unique large-format look of our LF sensor. Now that the ALEXA Mini LF is officially shipping, we can offer the perfect team of tools. Together, the fully-featured, high-speed ALEXA LF and the small and lightweight ALEXA Mini LF can tackle any job.” 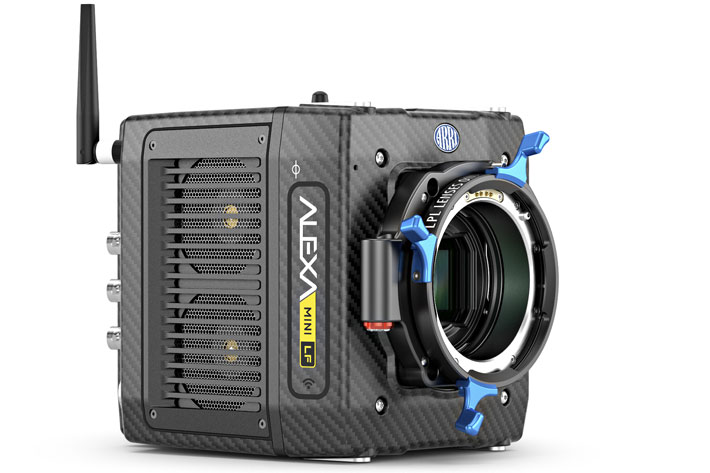 A huge sensor in a Mini-sized body

Both cameras share the same large-format sensor based on technology used in all ARRI digital cameras. Therefore, both share ARRI’s best overall image quality with the highest dynamic range of any production camera as well as ARRI color science for natural colorimetry, pleasing skin tones, clean VFX, and easy color grading. However, the LF sensor has twice the area of Super 35 sensors for that unique large-format look, increased sharpness, higher contrast, and smoother images combined with a lower noise floor for higher usable sensitivity.

The ALEXA Mini LF manages to fit that huge sensor in a Mini-sized body, with many new features like a media bay for the new Codex Compact Drives, a new high-contrast and high-resolution viewfinder with an additional flip-out monitor, internal motorized full spectrum ND filters, built-in microphones, additional accessory power connectors, genlock sync, and much more.

The ALEXA Mini LF records Apple ProRes or ARRIRAW in-camera without any add-ons and runs on 12 or 24 Volts. Since it is almost the same size and weight as the ALEXA Mini, the ALEXA Mini LF is compatible with most ALEXA Mini mechanical and electronic accessories, making deployment fast and easy. The LPL lens mount is perfect for ARRI Signature Prime lenses as well as for other manufacturers’ large-format lenses, and the PL-to-LPL adapter allows the use of all PL mount lenses. Using the stand-alone ARRI Wireless Video Transmitter WVT-1, the ALEXA Mini LF can easily become part of the full ARRI wireless video system, which is gaining in popularity. 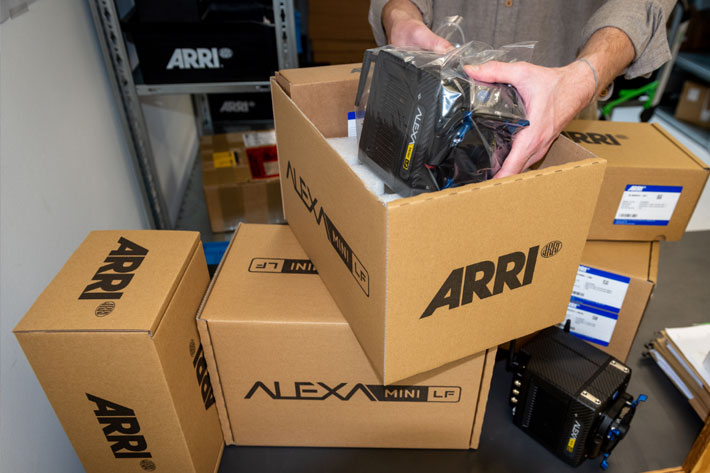 Marc Shipman-Mueller, Product Manager Camera Systems at ARRI, adds: “After we announced the ALEXA Mini LF, demand was so great, and many cinematographers really wanted to use the camera on their projects, that we decided to make pre-production cameras available before the official shipping date. We are happy that the pre-production camera’s performance has met our customer’s expectations. ALEXA Mini LFs have been on some spectacular high-end feature films, commercials, and TV series already and cinematographers are very pleased with the results. All that we have learned from those productions has, of course, been incorporated into the final production software.”

Owners of pre-production ALEXA Mini LF cameras will be happy to hear that there have been no changes to the hardware from pre-production to production. They can download the production software from www.arri.com and easily update their cameras at any time.