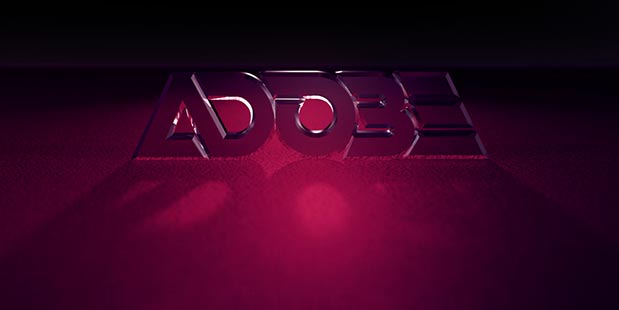 CS6 is now shipping; Cloud services and point product subscriptions are available May 11. CS6 trial applications good for 30 days are also available (with advice). CS6 Help is up, but for now has poor search results and no PDF.

If you’re been biding your time, there has been a ton of content already released on CS6, and most of it was collected in a recent roundup, Recently in After Effects. Pictured is a glass render made with the CS6 ray-tracer by Giovanni Antico.

Todd Kopriva noted that there has been no significant changes to the effect plug-in APIs, so you shouldn’t need new versions of plug-ins except in a few cases, like plug-ins (eg, RE:Vision Effects) that interact with the new caching scheme. For details, see plug-ins for After Effects CS6 and in plug-ins and third-party hardware for Premiere Pro CS6.

In After Effects CS6: Shapes from Vector Layers, Kevin P McAuliffe shows you how to create 3D extruded client logos in minutes inside AE:

AEtuts has a new course with over 3 hours of video training – Introduction to Motion Graphics. In it, VinhSon Nguyen shares techniques like creating teasers and trailers, lower thirds, 3D text, kinetic type and lens flares. There’s a cost becoming a Tuts+ Premium member at $19/month, which gives you access to numerous other premium tutorials access their entire network.

Rob Garrott at Lynda.com shares Two ways to create a reflective floor in After Effects:

This week, David Torno shows how the loop expressions work in Expression Shorts – loop. Earlier, In The Loop – A Killer Expression by Matthew Tompkins demonstrated the uses of the loop expression in After Effects, examining the loopOut(), loopIn(), loopInDuration(), loopOutDuration() commands and their “ping pong”, “cycle” and “continue” modes. See also Chris and Trish Meyer’s Deeper Modes of Expression, Part 8: Going for a Loop and a gaggle of resources in Adobe Community Help. For ease of use there’s also pt_AutoExpress by Paul Tuersley and The LoopMaker is an AE script by Lloyd Alvarez, which loops any layers, footage or comps with one click, added “cycle” and “Ping-Pong” loop types.

For even more on looping, see MotionRevolver posted Creating a Seamlessly Looping Animation with After Effects, Grayscale Gorilla posted Basics of Seamless Looping Animation Part 1 (part 2 is on Cinema 4D), and Evan Abrams’ Get Loopy with LoopOut.There’s also looping tutorials on Trent Armstrong‘s site, a Looping a Particle System from Aharon Rabinowitz, and looping backgrounds from Church Media Design in Some Backgrounds in After Effects.

Tim Harris shared a quick tip tutorial on how precomping solids can be very helpful when doing roto in After Effects, Roto with precomped solids:

WARPED- Behind the Animation (Mocap with Kinect) leveraged the tutorials by Victoria Nece on Kinect MoCap Animation in After Effects. See also DSLR + Kinect = Add Depth to Your Footage, Take a Peek into the Future on the RGBDToolkit (noted earlier).

Joren Kandel shows how to integrate Cinema 4D lights with Videocopilot Optical Flares to make a light array (more) and how to use Trapcode Echospace for After Effects.

Here’s an older tutorial by Paul Del Vecchio that some of us still need for a bit longer, Aspect Ratio Tutorial:

Chris Bobotis recently popped up on the AE-List to say that he didn’t want to talk about about a video on a “New 3D engine for After Effects CS6,” so of course that invites questions. The silent movie is about Mettle’s 3DNAE, which is described in pictures-only on their website. 3DNAE seems like a larger environment from which Mettle plug-ins are spawned. Since Chris won’t talk, you can tune into the loquacious Mylenium in 3D is easy in After Effects!?

Bakerstuts posted After Effects Tutorial: Syncronizer V3 Preset [PLUS DOWNLOAD], a presentation that could be tightened up but offers a few interesting approaches.

Danny Prinz explains how to modify a preference file for Faster raytracing in CS6 while rendering in the background… YMMV.

Todd Kopriva recommended Film Riot’s Put Yourself in the Avengers!. BTW, AE was used in The Avengers; see Previs, Techvis, and Postvis on The Avengers and VFX roll call for The Avengers (updated):

Dennis Radeke explain How to Integrate CS6 Production Premium into Your Avid/Apple Pipeline, along with After Effects’ ProImport and OMF in Audition:

Richard Harrington noted that Adobe Story has been dropped from the standalone versions of Adobe Creative Suite 6.

Dave Bittner explores options for those who enjoy tinkering on the Mac in Beyond Thunderbolt – Mac Pro GPU Slot Comparisons. Perhaps Apple will come through but others are adding vanilla Windows setups that use cheap Nvidia cards to accelerate CS6. Realtime rendering in Premiere and even limited acceleration in AE is hard to leave. Bittner’s in-depth testing (also discussed on the AE-List) was preceded by this video on NVidia Quadro 4000 for Mac accelerating the effects in Adobe Premiere CS6 over Thunderbolt:

Scott Simmons say that “The new Premiere continues to impress” in Random notes from my first “real world” Adobe Premiere Pro CS6 edit. Note some users actually like that double-clicking in a project panel lets you import (it’s been in AE and Premiere for years).

In a preview of a new course from Video2brain, Get­ting Started with Speed­Grade CS6, Chad Perkins answers the ques­tion What is SpeedGrade? For more video tutorials, checkout the new Speedgrade Help resources too:

SpeedLooks for Speedgrade is” a series of look presets that emulate 35MM film in real-time with the use of deep color 3DLUTs that will change the way colorists, editors, cinematographers, photographers and designers work forever.” Speedgrade-compatible looks (.Look files, cineSpace .csp files, and overrange IRIDAS .cube files) are also supposed to work in AE CS6.