A PVC Exclusive look inside the ASC Awards

Last night the ASC Awards took place at the Ray Dolby Ballroom inside the Hollywood and Highland complex.  It's always a great event that allows the community to celebrate excellence in cinematography and the art of content creation.  This year the ASC decided to change the format and created a much more casual and community feel by including so many of us who are involved with the society in one way or another.  Not an easy task when we're talking about filling a ballroom with a couple thousand in black tie but it was achieved and brought a fresh feeling and excitement to the 27th annual awards. 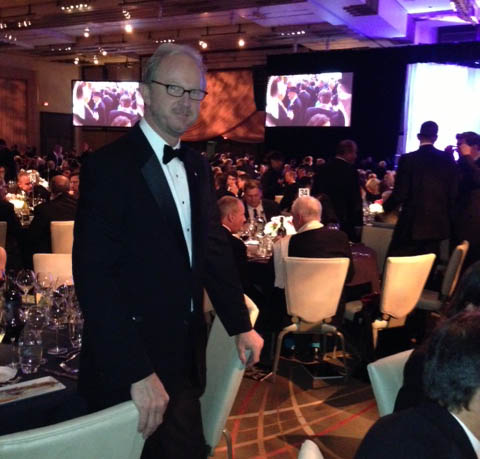 I had the pleasure to sit between Bob Nettmann, President of Nettmann Systems International (camerasystems.com) and Dave Frederick, SOC.  Bob and I chatted about his work with NASA during the early stages of the shuttle program. We also talked about the excitement and pressure of his engineering work which focused on ensuring that all the footage shot on the moon was stored and able to playback. What a task in in the 1960s… He also hinted that they will be releasing six new products in the next couple of months.  Stay tunned…

Dave and I discussed the upcoming SOC Awards on March 9th at the Academy of Television Arts and Sciences Theater http://soc.org/awards2013.html.  We also talked about the buzz in the air about Panavision coming out with a new cinema camera shortly.  There's definitely going to be another shake up coming for cinema aqusition.

Dean Semler, ASC, ACS received the Lifetime Achivement Award with the lovely Angelina Jolie presenting. We of course all know of Dean Semler's work but to see it presented in a beautiful compliation reel and hear about his support of Angelina's directorial debute was very touching.  His collection of work is truly amazing (http://www.imdb.com/name/nm0005871/).

Hanging up my awards dress and back to work.