When I was first asked to take a look at the Amkov AMK5000 WiFi 1080P/14MP action camera that is obviously a clone of the popular GoPro, I was not only skeptical but a bit amused at just how much detail this manufacturer went through to copy the HERO form and function. So I thought, okay – is it really worth saving $50 to get a lesser-known brand action cam, and what features/quality could it possibly provide that would make it worth the investment to find out? Let’s find out… 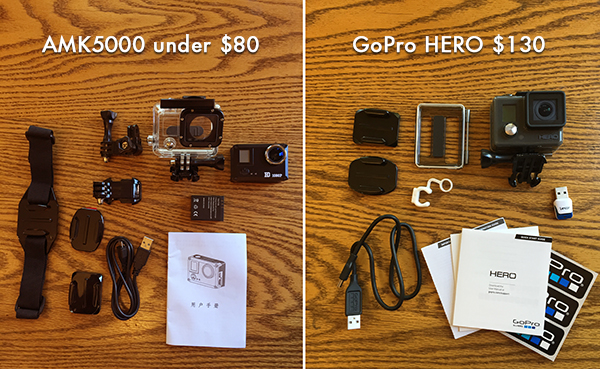 This didn’t start out to be a comparison test, but once I received the Amkov AMK5000 from the distributor GearBest.com, I knew right away that I had to see just how close it came to the GoPros and got a basic GoPro HERO to see how it compared.

While I haven’t had a lot of time to do a rigorous test with these two cameras to date (video tests to follow soon), I did want to at least point out physical similarities and differences between them and the features they offer. Of course, the proof will really be in the results. 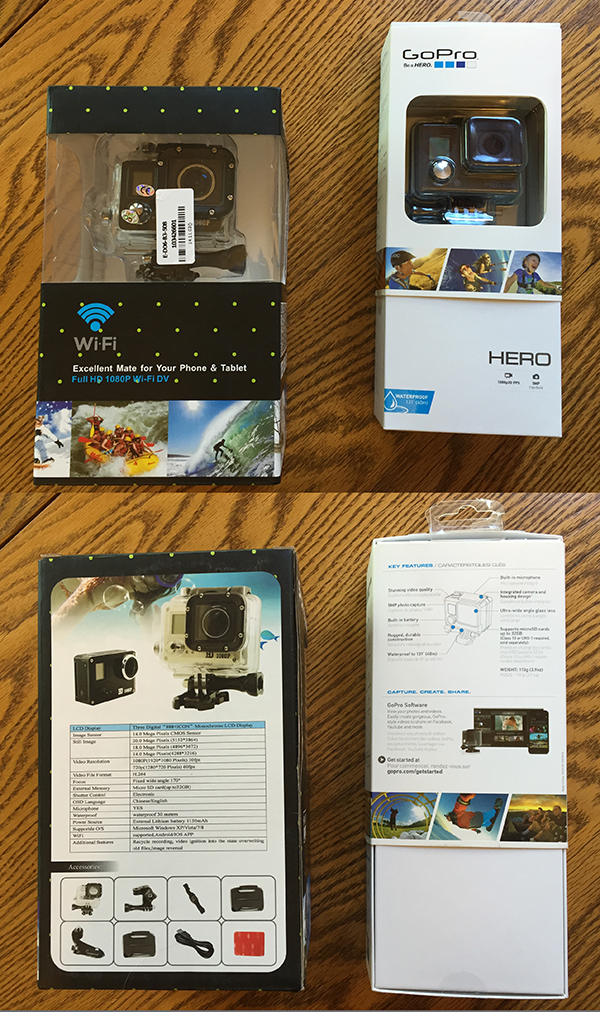 First, let’s take a look at what you get in the box with the AMK5000, as described by their website: 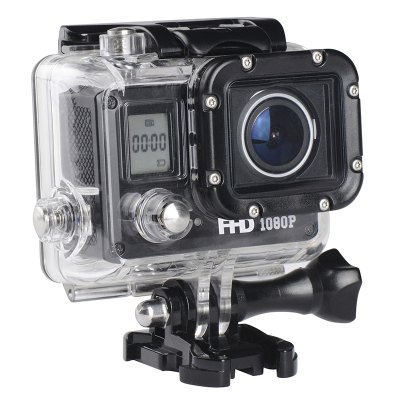 So when they say their camera is compatible with GoPro Accessories, they mean that it is a CLONE of the GoPro format!

The waterproof housing is nearly identical to the HERO3 housing, with a HERO2 style latch mechnism. You can put a GoPro inside their housing and it fits and the buttons align exactly – and vice-versa.

Even the battery looks to be the same as the HERO3, though they’re not interchangeable. But that’s where the similarities tend to stop. 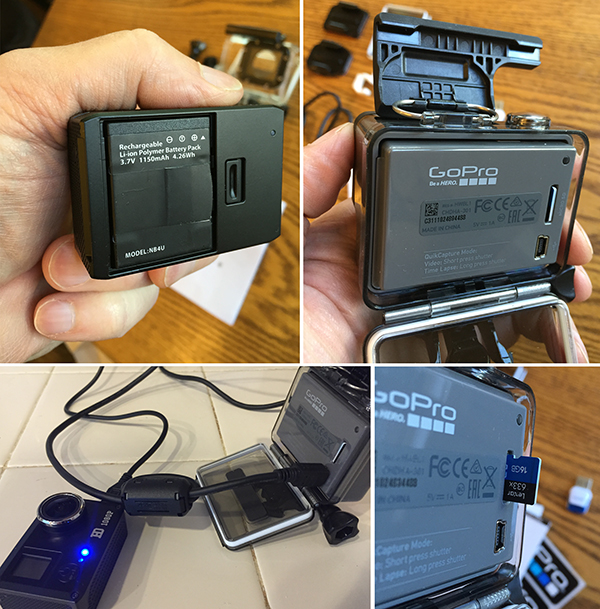 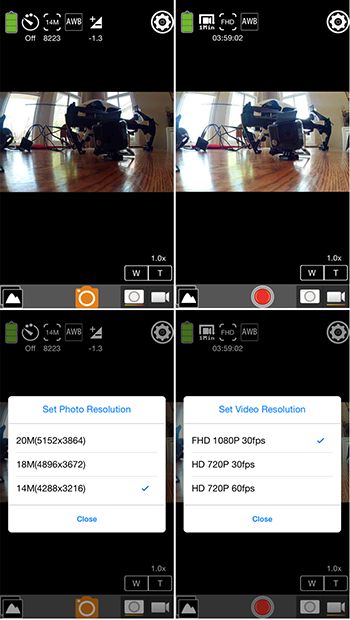 The camera has a power-on function similar to GoPro and the top button starts recording/takes a photo and the side button starts up the WiFi – which you MUST connect to your smartphone through the free AMK-icam app provided in iTunes/Playstore. There are not settings menus accessible on the camera itself. This is a big shortcoming IMO, as the only thing you can do is switch between Photo/Video modes.

With the AMK-icam app, you can access all the deep menu items such as white balance, ISO (up to 1600), spot metering, color effects, scene presets, continuous shooting, self-timer, photo resolution and video modes, including timelapse.

While the app interface is simplistic it’s very intuitive and the live signal from the WiFi is much more responsive than the GoPro app. You can also trigger the camera and change modes/settings directly from the app, which makes it a functional remote control for the AMK5000. 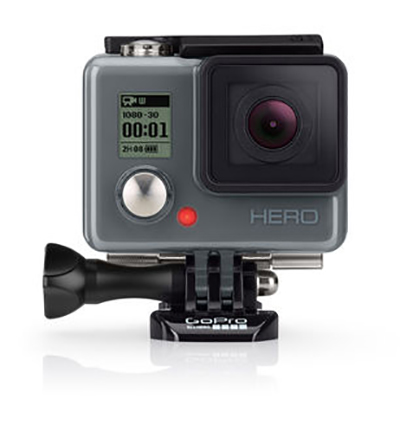 Now let’s looks at what you get in the box with the GoPro HERO, as listed on their website:

Spot Meter is ideal for filming within a dark space with the camera pointed towards a brighter setting (such as filming the outdoors from within a car).

SuperView video mode captures the world’s most immersive wide-angle perspective. It allows you to capture more of yourself and your surroundings in the shot, and it provides full widescreen playback.

With the press of a button, the camera automatically turns on and begins recording video or capturing Time Lapse photos.

Automatically capture a series of photos at 0.5-second intervals.

Spot Meter is ideal for filming within a dark space with the camera pointed towards a brighter setting (such as filming the outdoors from within a car).

With the press of a button, the camera automatically turns on and begins recording video or capturing Time Lapse photos.

The chart below indicates the approximate continuous recording time (hr:min) you can expect when shooting in various video modes using a fully charged battery.1

1 Actual performance may vary based on settings, environmental conditions and other factors. Maximum battery capacity will normally decrease with time and use. 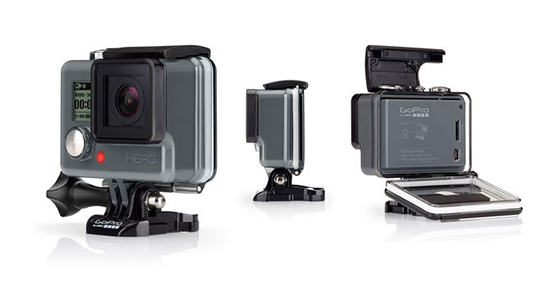 Unlike any other GoPro HERO camera model before, the new base model HERO doesn’t come out of its waterproof housing, so it’s permanently encased as its form factor.

This makes the latest GoPro HERO less desirable if you need to mount it in another method such as a gimbal for aerial shooting or other smaller form. It also doesn’t have HDMI out like the AMK5000 and the SD card slot and USB are on the back behind the door instead of the side. They do provide a Skeleton back for easier access without opening the door or unmounting the HERO from it’s attachment base.

The HERO also does not have WiFi, so it cannot be operated remotely.

While I don’t have a lot of comparrisons to share yet (will psot video clips shortly), I did my usual spin around our neighborhood by the Bay before sunset which is a great camera test for lens quality and dynamic range capabilities of the sensor. I really can’t say I was suprised at the results.

Both cameras were set to the same settings: 1080p/30, AWB, Auto ISO – they were both mounted with identical GoPro Suction Cup mounts to the hood of my car.

First of all downloading the media from the SD cards, I had one single video file as I usually get from the GoPro for anything less than 12 minutes or so. This was about a 5:43 long video test. However, the AMK500 split the video up into smaller segments of about a minute each. WHAAAAAAT?? Not sure why they’re doing that, but that would be a major pain to edit!

Then, it came time to compare frames from the video files…

The AMK500 has noticable distortion and vignetting in the lens, plus a pretty strong lens flare and the dynamic range isn’t very good compared to the HERO. There’s also a lot of visible noise in the image and the colors are quite over saturated. I didn’t notice any visible rolling shutter, so that’s good, but I’m not sure I’d count on this camera for low-light or harsh contrasting light conditions. It does have a lot of features and comes with plenty of basic accessories to get your started, if you’ve never had a GoPro before. 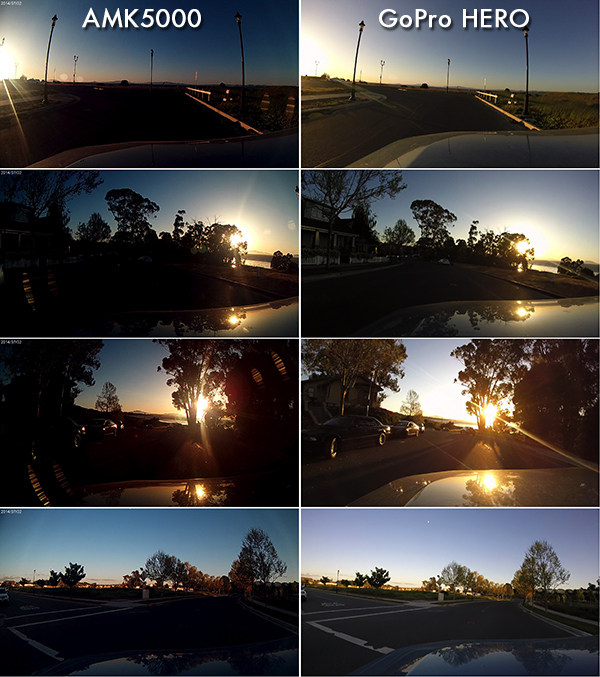 So is the AMK5000 worth $80? It depends on what you’re hoping to do with the footage you get from it. For students and kids to make fun skateboard or surfing videos with their friends, I’d say it’s probably great. Or if you needed a few POV action cams that you didn’t mind destroying trying to get a few seconds of an impossible shot for your project, then I’d say go for it. It does come with some good accessories and has features you may want to experiment with – plus it IS over $50 less than the basic GoPro. But in the end, I believe that GoPro quality still holds up – even with a lack of features in their base HERO camera.