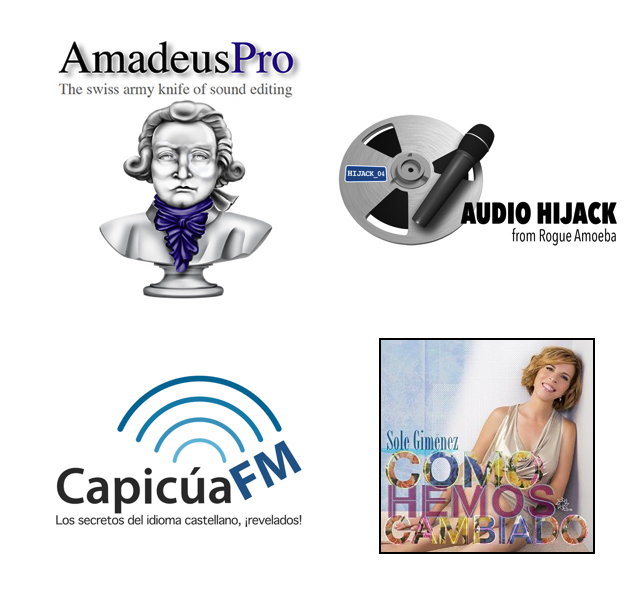 Previously, I described how to produce a podcast live-to-drive using BossJock Studio with an automatic mixer (article links ahead). However, that isn’t practical when you’re interviewing a Spaniard singer/songwriter like Sole Giménez (ex-Presuntos Implicados) about her latest album via an international phone call, and also want to intertwine pieces of her own music based upon her sometimes unexpected responses. Ahead is the workflow and the final recording I used with CapicúaFM’s latest episode, including many of the audio apps used.

Above is CapicúaFM’s current episode, so you can hear the final product of the production covered in this article. By the way, the CapicúaFM program is in Castilian (the most widely used Spanish language, but one of several others), but even though you may not understand it, you’ll hear beautiful music from Sole Giménez’s latest album, Cómo hemos cambiado (How we’ve changed) together with my voice as we discuss her album, Mexican terminology & misunderstandings, and Mexican food. Information about how to subscribe to CapicúaFM free is available here.

Basic workflow I used for the most recent CapicúaFM episode

As I have done many times in the past, I used Skype to make an international phone call to the interviewee, using what is now unofficially known as SkypeOut. (You prepay Skype —now part of Microsoft— and the call is deducted from the prepaid balance.)

Ever since Übercaster became unusable after Mac OS updates, I have been using Rogue Amoeba Software’s Audio Hijack Pro (currently US$32 directly from them) to record Skype audio calls. I have been a licensed user of Audio Hijack Pro for many years. Some people prefer to use Rogue Amoeba Software’s more recent product called Piezo, which is both cheaper and simpler to use. However, Piezo currently only records to compressed formats, and I am a purist who prefers to make all original audio recordings in uncompressed AIFF or WAVE, so I still use Audio Hijack Pro to record phone calls on my Mac. (Spoiler alert: In an upcoming article, I’ll be covering how to make phone interviews with true mix-minus using a new portable audio recorder, and without the need of any computer or external mixer, but that is not what I did with this episode of CapicúaFM with Sole Giménez.)

Audio Hijack Pro not only allows recording both sides of your Skype audio conversation, it allows you to record dual mono, so you (the Skype user) and the interviewee are on independent tracks. As I have covered in prior articles, many recorders and apps that can record dual mono do so as a “stereo” file, which can later be converted to dual mono, for better control during editing. 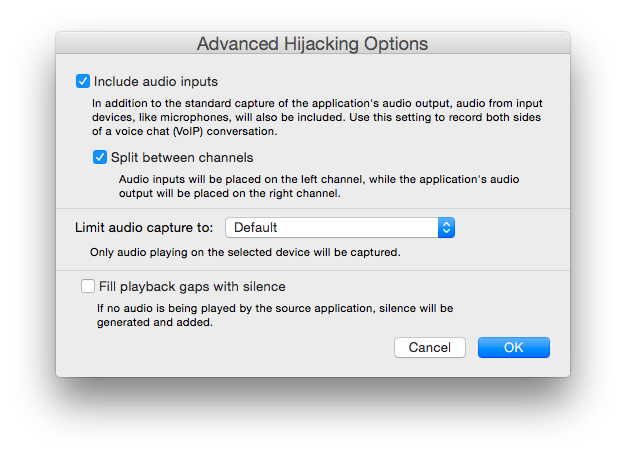 Audio Hijack Pro is no exception, although the setting to accomplish it is somewhat hidden in an advanced dialog box, as shown above. So after selecting Skype as the program to be hijacked, you click on the Advanced button in the Input section, and then mark the two first options in the Advanced Hijacking Options dialog box: Include audio inputs and Split between channels. As explained in the dialog, your local microphone (in my case, the hybrid dynamic AT2005USB microphone which I have covered in many prior articles and ebooks) will be recorded on the left channel, and the Skype caller will be recorded on the right channel. In the Skype preferences, I selected the AT2005USB as the source, and deactivated Skype’s AGC (automatic gain control).

There are some people who like to record pure Skype-to-Skype conversations (i.e. not SkypeOut), and I am one of them, when the circumstances are appropriate. The above described recording instructions work equally well for Skype-to-Skype or Skype-to-phone. In this case, I needed to call Sole Giménez’s publicist’s cell phone in México, and record about 22 minutes. 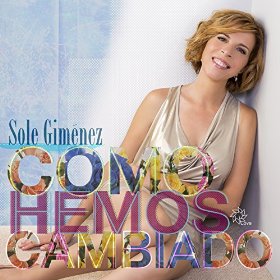 During our conversation, Sole was being transported between several local radio and TV interviews in México, where she was promoting her latest álbum, and also her upcoming January 2015 concert in México City. Skype-to-Skype was not an option in this case. Even though Sole was on a mobile phone, the quality of her voice is quite intelligible, and of course I mentioned at the beginning of the call that we were speaking with her via telephone in México City, to set the proper expectations among listeners.

For this type of production, editing the interview is only one small element in the whole process. After the interview was recorded, I then wrote, rehearsed and recorded the necessary bridge text for the tease (i.e. the part that goes before the pre-recorded intro), the first section of the show that leads up to the interview, and the closing comments which go after the interview, all in the same room where I had done the interview. I recorded the bridge text using the same dynamic hybrid AT2005USB microphone I used for the interview, although during the interview, the AT2005USB was connected to my MacBook Air via USB, but for the bridges, I connected it via its analog XLR to a portable audio recorder I’ll be covering soon. To my ear, the recording is slightly better in the bridges than in the interview, and I attribute that difference to two things: The preamp and A>D (analog-to-digital) converter are better in the recorder than the one built into the mic, and the recording in the recorder is 24-bit, while the internal one in the mic is only 16-bit. Fortunately, the bridges are not back-to-back with the interview: They are separated by music, the open, pre-recorded bumpers, and commercial spots.

Music: the legal and the technical issues

First I will cover the legal use of the music I have used, followed by the technical part.

The music I use in the CapicúaFM open, bumpers, and closing is one that I purchased with worldwide rights to use in my programs. The music of the artists I have interviewed so far in CapicúaFM (Bárbara Intriago from Chile, the Ospina brothers from Colombia, and Sole Giménez from Spain) are all used with their permission to accompany their respective interviews. Unlike some other musical artists who are with a record label (and therefore often don’t have the authority to give such permission), these three singer/songwriters are independent producers and fortunately do possess such authority to grant permission. In one part of the interview where I asked Sole questions about how she handles rhyme when composing her songs, I also used two very short clips from two other artists (Verónica Castro’s Mala noche no and Barry Manilow’s Mandy) to illustrate the fact that they both resorted to saying “I can’t find the rhyme” or “nothing is rhyming” when they apparently couldn’t find the appropriate words. Because the clips I used are so short and used to illustrate a journalistic and educational point, I consider them to be covered by fair use.

Although I am an audio/video purist, sometimes we don’t have access to the uncompressed master of music we must include, so sometimes it is necessary to use a pre-compressed piece of audio. That is the case here. Although no extra quality is gained by uncompressing before editing, I have the habit of doing so with audio clips I must extract from a compressed source before editing them in a multitrack audio editor together with native uncompressed files. So when they don’t contain DRM, I convert them using Rogue Amoeba’s Fission (currently US$32 either directly from them or via the Apple AppStore for Mac). Fission is actually an excellent audio editor which I love for single track audio editing (not multitrack audio editing). In fact, if editing only from a compressed source, Fission is able to do so without decompressing and recompressing the file, in order to save a generation. However that is not the case in this production, since I was combining mostly never-compressed sources with a few compressed ones, and I needed a multitrack editor in this case since I needed to mix voice with music.

Editing with a multitrack audio editor 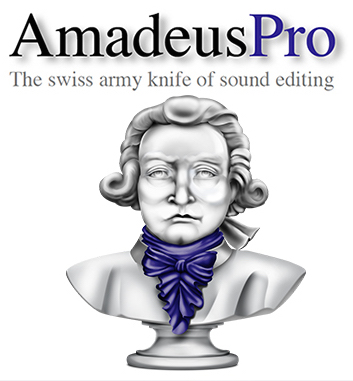 This episode was the first project where I used Amadeus Pro from HairerSoft (currently US$59.99 directly, or from Apple’s AppStore. Since in HairerSoft’s forum, the developer indicates that the Apple AppStore version is somewhat more limited, probably due to Apple’s sandboxing requirements to appear there, I purchased Amadeus Pro directly from HairerSoft’s website). I was glad to see that it offered Amazon payments. Previously I had only tinkered with the trial version of Amadeus Pro, and was quite impressed how quickly the developer responded when I pointed out an inappropriate translation in the Castilian-localized version, which has since been fixed.

Before I continue with the explanation of some details in my workflow, I am going to pause and explain why I didn’t choose to use the free GarageBand from Apple, the free Audacity, the paid Adobe Audition, or the paid Pro Tools from Avid.

I created and used several tracks in Amadeus Pro. Beyond the interview, I used one for my bridges, and one for stereo music and stereo openings, bumpers, and commercial spots.

Under normal circumstances, I would have converted the “stereo” track of the interview into dual mono and left it that way throughout the edit. However, after converting the stereo track into dual mono, I was unable to maintain them linked (so I could cut out a section of one and the other simultaneously while maintaining overall sync). It is possible that there may be a way to link separate tracks in Amadeus Pro to accomplish that, but I couldn’t find a way, so I saw and used a shorter path to accomplish the goal:

Contact Allan Tépper for consulting, or find a full listing of his books, articles and upcoming seminars and webinars at AllanTepper.com. Listen to his CapicúaFM and TecnoTur programs. Search for CapicúaFM TecnoTur in Stitcher Radio. 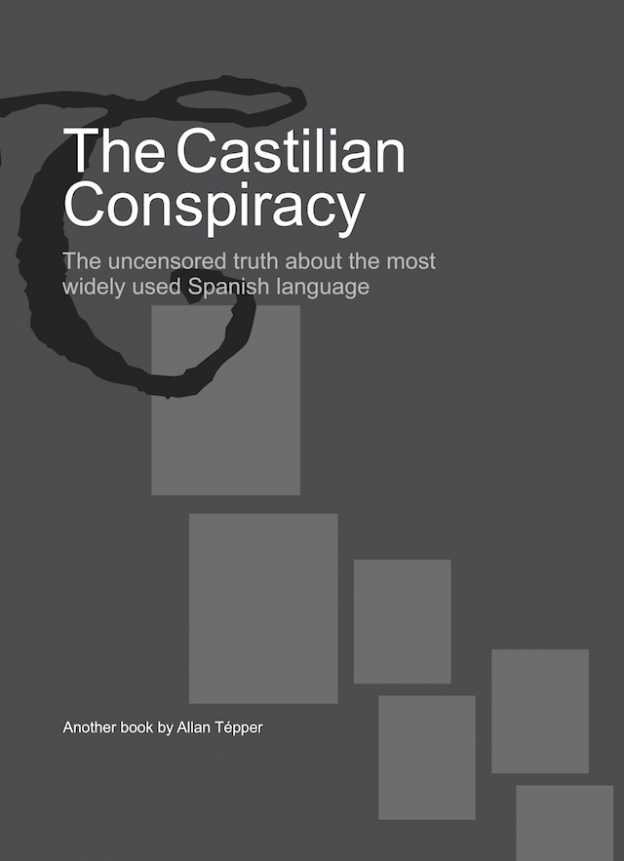 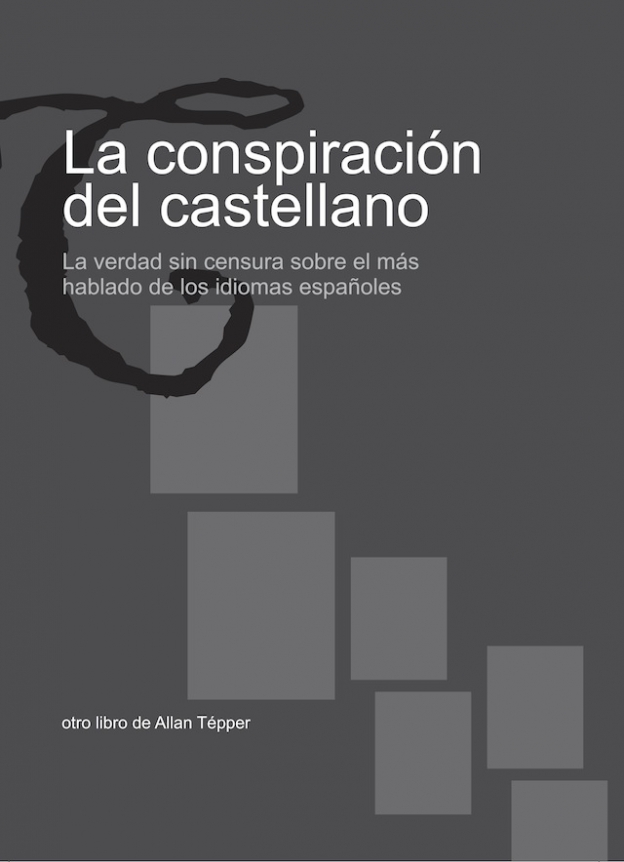