ARRI’s first camera to go wireless, the ALEXA SXT is one of the highlights of ARRI’s presence at NAB 2017, but the company introduced a number of important technical advances to its customers and partners. 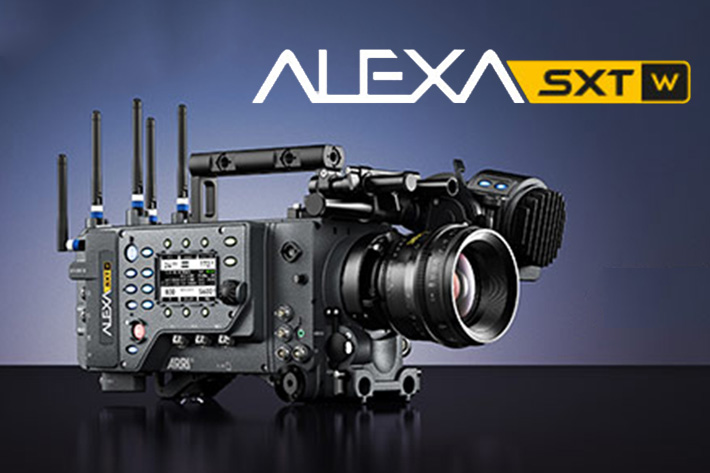 A new-high speed ballast, the AMIRA Software Update Package and the first entirely wireless professional motion picture camera system are some of the reasons to visit ARRI’s booth at NAB 2017.

Days before NAB 2017 ARRI announced an upgrade to the ALEXA SXT platform, making ALEXA SXT an entirely wireless professional motion picture camera system. In a move that will increase efficiency on set, ARRI has integrated a high-quality and low-latency HD video transmitter and a WiFi radio into the new ALEXA SXT W model (“W” for Wireless). Based on the popular ALEXA SXT Plus, the SXT W will replace the ALEXA SXT Plus and ALEXA SXT Studio models. As always, there are attractive upgrade options for existing owners of ALEXA SXT EV and ALEXA SXT Plus cameras.

Having a video transmitter built into the ALEXA SXT W makes the camera smaller and lighter than it would be with an external transmitter, and avoids the associated cable problems. Camera setup will be quicker and productions will be able to move faster, freed of the necessity to route video cables.

In addition, the integrated WiFi radio opens a whole range of options, starting with wireless color management on set and continuing with wireless camera remote control with the ALEXA Web Remote. Other exciting WiFi options are currently in development.

“Our wireless video uses technology from market leader Amimon, with special hardware and software modifications to comply with ARRI’s stringent performance and quality requirements,” says Marc Shipman-Mueller, ALEXA Product Manager. “But that is not all; the wireless video system works harmoniously with ALEXA SXT’s other radio-based offerings – the WiFi and our own proprietary camera and lens control system – avoiding time-consuming interference between the radios on the camera.”

The ALEXA SXT W forms part of a new and complete ARRI Wireless Video System (WVS), along with a stand-alone video transmitter for use with other cameras such as the ALEXA Mini, and a stand-alone video receiver for receiving signals from either transmitter. An extensive accessory range includes mounting brackets, antenna extensions, the handheld Director’s Monitor Support (DMS-1), and a specially adapted Transvideo monitor with a built-in receiver for the ARRI transmitters. The system is designed for real-world usage on professional sets, with all components being spray and dust proof, constructed from rugged materials, and having a wide operating temperature range.

“We are very proud of our joint effort with ARRI on their new wireless ALEXA SXT,” says Ram Ofir, CEO of Amimon. “We worked closely with ARRI’s engineering team on customizing the wireless video modules, adding new features and optimizing performance for ALEXA. I believe that our continued venture with ARRI will be fruitful and yield unique developments in the future.”

“This significant upgrade affirms our commitment to the ALEXA SXT camera platform,” says Stephan Schenk, Managing Director of ARRI Cine Technik and Head of ARRI’s Business Unit Camera Systems. “From the very beginning we have planned various upgrades for the ALEXA SXT platform and I am pleased to now announce a camera that allows a wireless workflow on set.”

At the Las Vegas show visitors can get up-close with ARRI’s new flagship for its range of high-speed electronic ballasts. Designed for all discharge lampheads between 575 and 1,800 W, the EB MAX 1.8 combines cutting-edge features with new remote control possibilities.

Since NAB 2015 ARRI has continually expanded its latest generation of electronic ballasts. All models are equipped with an AutoScan feature that ensures optimum light and image quality with a minimum of effort for high-speed recording up to 1,000 fps and beyond.

Available for all AMIRA models, the Multicam mode makes the exceptional image quality of ARRI’s ALEV III sensor – also used by ALEXA – available to productions within the multi-camera broadcast sphere. Through a Multicam setup, the AMIRA’s shallow depth of field, unrivalled dynamic range and natural colorimetry can lend a cinematic look to live broadcasts, music concerts, TV soaps, and other fast-paced, multi-camera productions.