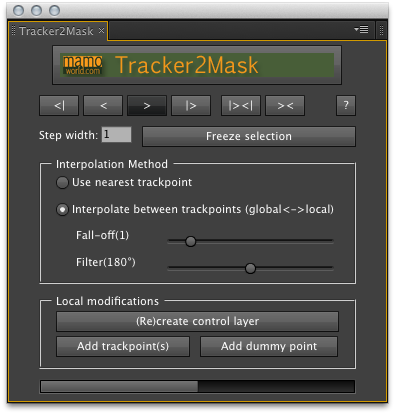 Into every After Effects artist’s life a little roto must fall. Although I was told there would be no roto when (name-drop alert!) I worked on Avatar, there came a point right at the end where I had to jump in on a several-hundred frame tracking shot in which foreground and background had to be separated. Tracker2Mask allowed me to leverage the tracker itself to complete this task.

Tools to track a mask point are integral to compositing applications such as Discreet Flame, and the standard impression has been that no equivalent feature set exists in After Effects, despite the addition of the Shape effect that allows usage of a mask tracked in mocha for After Effects, albeit in a completely non-standard way. If the desire is simply to track a point or set of points on a mask, Shape is not the answer.

Tracker2Mask adds what might be considered a major feature if it were included with the shipping version After Effects. In plain terms, it allows you to apply point tracks created right in After Effects to masks. You give it the starting and ending mask shapes – first and last frame only – and it uses the track data to fill in everything in between.

This is generally more useful than simply tracking a mask point. For one thing, mask points rarely correspond to trackable objects in frame. Moreover, a typical mask might have a dozen or more points; for Tracker2Mask to work its magic and maintain the proportions of that mask, over time, it generally requires a maximum of 4 points, like a corner pin would require to determine position, rotation, scale and skew.

Does it work? In a majority of cases it works best in combination with Keytweak, which was profiled as a previous script of the week. I have found it can help to add track points, and Rotobeziers sometimes behave better than Bezier masks simply because the Bezier handles don’t automatically scale. The ultimate secret sauce here may be how effectively mocha for After Effects can be used to add trackpoints – it’s not straightforward, but you can use features to add trackpoints and dummy points to link to exported mocha export data.

When it comes to roto, I freely admit I always look for the automated solution before going full manual, and on that Avatar shot, I was able to take what would have been a day’s work and complete it in a couple of hours, and on a smaller project, it could make a big difference to meeting a deadline.