It seems such a simple idea: a banner scrolls across the top or bottom of your comp, repeating the same few words over and over, and doing so seamlessly for as long as you need.

Here’s how to create such an animated banner in After Effects, using either the Offset (or Motion Tile) effect or the Autoscroll animation preset.

The finished animated banner will loop seamlessly. This version was created with the Offset effect, but Motion Tile can create the same seamless loop.

Here’s the basic idea and workflow:

The first step, no matter which effect you use, is to create a precomp to hold the text (or text/graphics) that will scroll. The advantage to having a setup comp is that you can easily adjust the spacing around the edge that “wraps around.” You can also easily create multiple layers or add icons or logos.

The precomp needs to be at least as wide as the final comp (720 pixels or wider) – otherwise it won’t fill the width of the Final comp and the effect won’t look like an “endlessly long layer.” However, if you make the precomp exactly 720 pixels wide, then as soon as one word scrolls off the left side, the same word will immediately scroll in again from the right side. This tends to be a little predictable, so create a wider precomp; this also gives you a little wiggle room to scale down the layer in the second comp if you later find the text is too tall.

As for duration, make sure it’s plenty long enough to fill the Final comp’s duration. Since the precomp is basically a still image, go ahead and make it a minute long so it never comes up short.

If you don’t have enough text to fill the precomp (let’s say you just need to repeat “Breaking News” or “New Releases”), then simply duplicate the text as many times as you need. Consider adding a bullet, icon, or tiny logo between each set of words; this not only adds interest, but helps the reader know where one phrase stops and another starts.

Our setup precomp is 1200 px wide and contains two phrases, with a red star between them (above). Notice we left some space on the right side, so that the last word would not butt up against the first star when the banner is scrolled. The timeline has a total of four layers (below).

In this example, we used two sentences and added a red star between them. The precomp is 1200 px wide; the width is determined by the length of the text, not by any magic formula. We aimed to create the text and icons at the final size, so we don’t have to scale it down in the Final Comp. The height is 60px, for efficient rendering.

If you move your elements flush with the precomp’s left edge, then you can more easily tweak the width of the precomp in Composition Settings > Advanced tab by setting the Anchor to left edge (the next figure below). 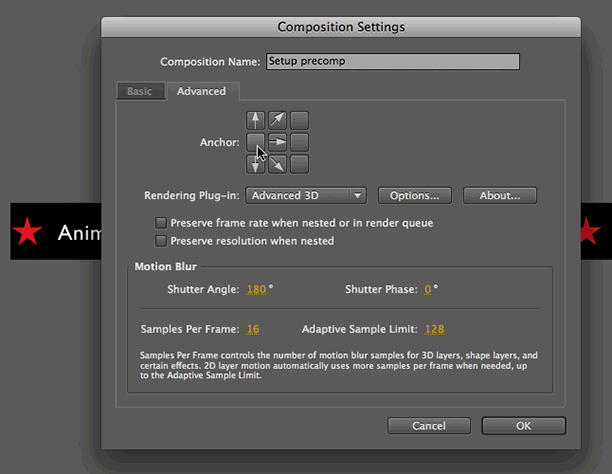 If you keep your elements flush left in the precomp, you can easily add or trim a few pixels from the right side of the comp in the Composition Settings > Advanced tab by setting the Anchor to the left edge.

Once you’ve made a good stab at the Setup precomp, nest it into the D1 Final Comp and position it where it needs to go. At this point, you might decide the banner text is too large or too small, or you don’t even like the font, so edit back and forth until you’re satisfied.

To animate the banner, you apply Effect > Distort > Offset to the setup layer that is nested in the Final Comp. Offset is a super easy effect with one parameter you need to be concerned with: the “Shift Center To” effect point. The default value will be equal to the center of your layer (width and height). So in our example, this value will be 600, 30 (half the width of 1200, half the height of 60). The result is that the layer is not shifted using the default settings.

The default settings for the Offset effect shifts the center to the center of the layer, so nothing will appear to happen at first.

If you’d like the banner to start off with the first phrase of your text appearing flush left in the Final Comp, edit the Shift Center To value until it looks like the left edge of the precomp.

To animate the banner:

As the banner scrolls, check the wraparound point carefully. Here, we have too much spacing at the end of the second phrase in the precomp, which causes the spacing at the wrap point to be inconsistent (above). To fix this, either take a few pixels off the width of the precomp, or tweak the position of the elements until it looks even. Tweaking the text tracking is another easy fix (below).

Now that you have a handle on using the Offset effect, let’s see how the Motion Tile effect compares, as well as show you how to make the banner seamless loop…

The advantage of using Effect > Stylize > Motion Tile over the Offset effect is that Motion Tile can use the comp’s regular motion blur settings, if you need blur. Motion Tile has more parameters at first glance, but the only one you’ll need for an animated banner is the Tile Center parameter. You use this parameter exactly like the Shift Center To parameter in the Offset effect (see page 1). 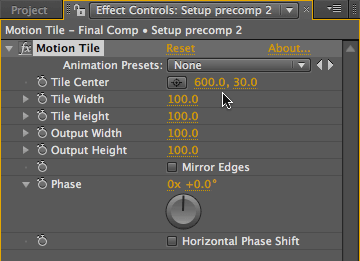 The Motion Tile effect can be used instead of Offset; in this effect, you animate the Tile Center parameter. The other parameters can be ignored for a simple scrolling banner.

The Autoscroll animation preset is basically the Motion Tile effect with an expression controller added. The controller allows you to set the speed in pixels per second. And again, since it uses Motion Tile, you can also use the regular motion blur controls rather than a blur effect if you need to. 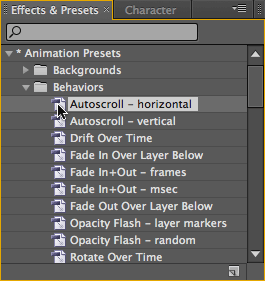 The two Autoscroll presets can be found in the Effects & Presets panel in the Animation Presets > Behaviors folder. (If Animation Presets are not visible in this panel, toggle them on from the panel’s options menu.

There are actually two Autoscroll presets: one for horizontal and one for vertical scrolling. We’ll use the former to create our banner: 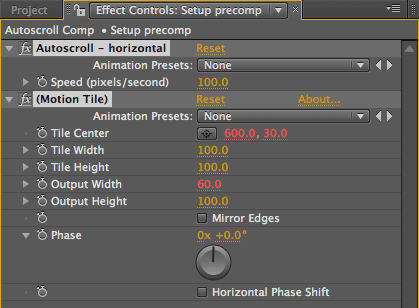 Applying the Autoscroll – horizontal preset will add the Autoscroll expression controller and the Motion Tile effect to your layer. Now you can easily set the speed in pixels per second.

If the project calls for you to render a short animated movie that be seamlessly looped in an editing program, then you’ll need to be a bit more precise in the keyframe values you use to shift the layer using either Offset or Motion Tile (the Autoscroll preset can’t loop). In our example project, both the Offset and Motion Tile examples loop seamlessly over 15:00. Here is how we did it:

To create a seamless loop, the work area is set to end one frame before the second keyframe, and then the comp is trimmed to the duration of the work area.

The Offset effect was used to animate the banner seamlessly.

The benefit of all of these approaches is that you only have one layer and one property to animate (and in the case of Autoscroll, you don’t even have to set a keyframe!). Plus you don’t need to create a super-duper-wide layer to make it appear infinite – it is infinite! Hope you can put this to good use in your own projects.

The content contained in the CMG Blogs and CMG Keyframes posts on ProVideoCoalition are copyright Crish Design, except where otherwise attributed.