A demonstration of how the “all the pixels, all the time” philosophy impacts performance 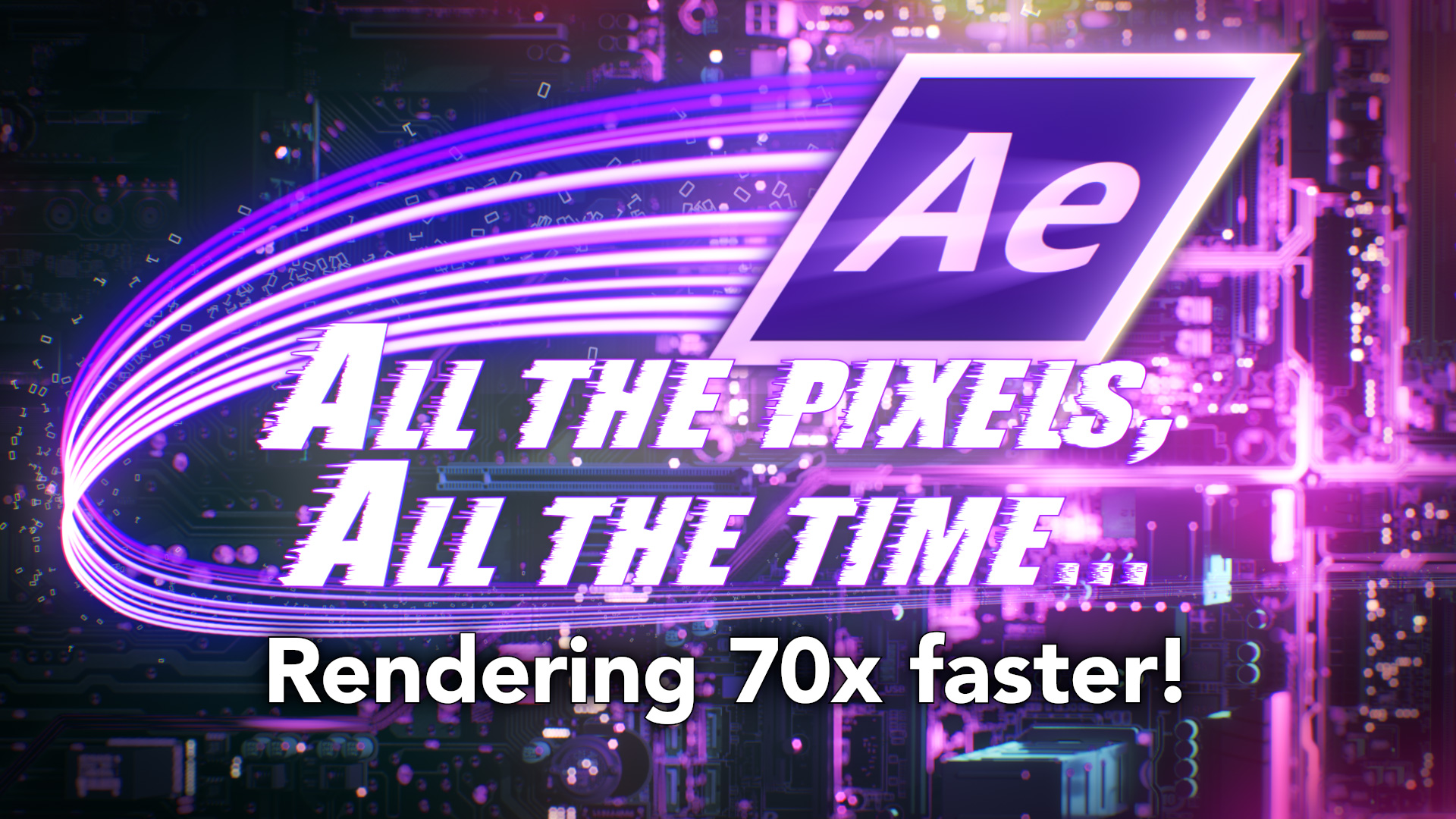 Rendering times in After Effects can vary a lot.  If you’ve been using After Effects for a while, you’ve probably had some projects that render quickly, and others very slowly.  Sometimes it can be hard to pinpoint exactly why some projects render faster than others.

In my recent series on “After Effects and Performance”, rendering speeds were a recurring theme – for many users the notion of “performance” is defined by rendering speed.  In Part 2 of the series I examined exactly what After Effects does – it works with bitmap images – and that processing bitmap images involves going through every pixel in every layer.  In Part 3 I looked at the implications of this for rendering times, and how the amount of data being processed can increase exponentially with larger resolutions, more bit depth, and more layers.

However although I referenced a few projects I’d worked on, and some articles I’d published a few years ago, I didn’t actually include a very clear demonstration of just how significant these factors are when it comes to rendering.  And so that’s what we’re looking at now.

The After Effects developers at Adobe sometimes use the phrase “All the pixels, all the time” to refer to the underlying philosophy behind the way that After Effects renders.  While there are several ways to interpret exactly what this means, the video here demonstrates that all the pixels in a layer are processed, even if they’re not visible.  In this specific example, we can dramatically speed up our renders by using layers that are only as large as they need to be, so we’re not wasting time processing pixels that aren’t needed.

We can’t forget that After Effects is a video application, and that rendering a single frame isn’t as common as rendering compositions that can be hundreds, if not thousands of frames in duration. So the time taken to render each frame will be multiplied by the number of frames to render.  Just this week a work colleague asked if I had any advice to make a composition render faster.  But when I looked at the rendering times, the average time to render a single frame was less than 2 seconds – which I thought was pretty fast!  The issue was the long duration of the composition.

More recently, Adobe have added a fifth new variable – Multi-Frame Rendering.  This is a new feature, still in Beta development, that utilizes more than one CPU core to render multiple frames of a composition at the same time.  Depending on your hardware, rendering can be more than twice as fast.

The After Effects & Performance series went through all of this in great detail, but now we’re actually going to demonstrate it.  We’re going to look at how changing some of those factors can make a composition render 70 times faster.

The video covers all of the details, but it’s probably worth emphasizing that this is a relatively niche demonstration.  I didn’t try changing the overall composition resolution, and having 920 layers in a composition isn’t something you see every day.  The project only uses one effect, and yet it’s a great example of how simple changes to bit-depth and resolution can dramatically affect the amount of data that After Effects has to process in order to produce a rendered image.

The video mentions an older article of mine,” Vegas Visits Vivid”, that you can read here.

The free script by Christopher Green – along with other great After Effects resources – can be found here.

The “Masks to Cropped Layers” script can be purchased from aescripts+aeplugins, a trial can be downloaded to experiment with.

And finally, if you want to catch up on the “After Effects and Performance” series then start here! 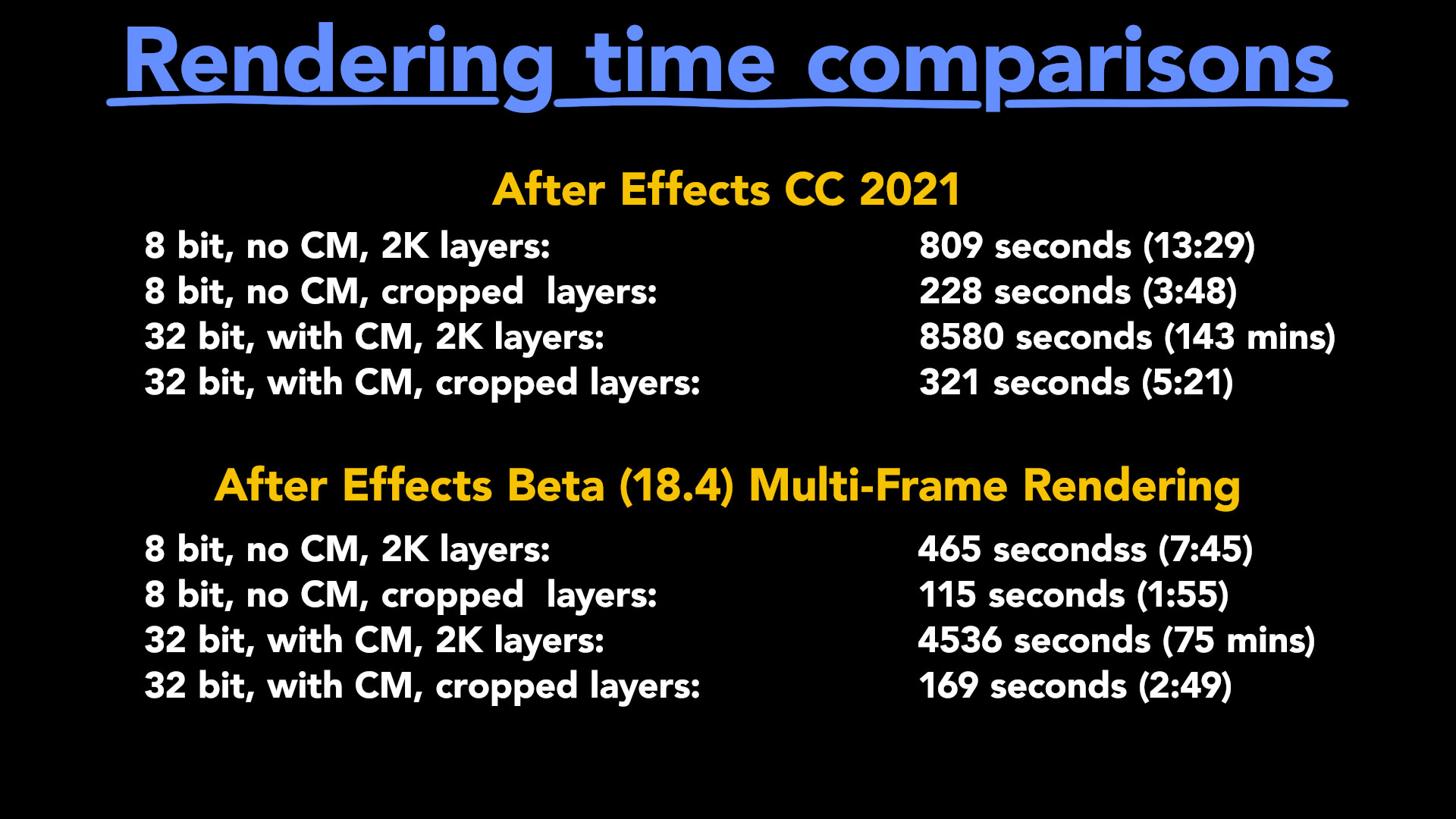