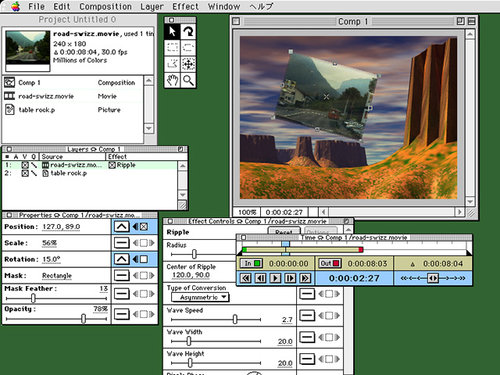 Adobe is celebrating the 20th year of After Effects. Above is AE before the killer 2.0 feature: the Timeline window (which combined Time, Properties, and Layers). To kick off the party, Adobe posted Happy Anniversary After Effects from a new Adobe TV playlist with Stu Maschwitz, Andrew Kramer and more, Ae & Me. Check out also the revamped AE team blog with stories from the AE team and fans (submit your own story), and 3 months of Upcoming events listed on Facebook.

If you tweet, don't miss the January 15 “Super Special After Effects Chat” (#MoChat) tonight at 9 p.m. ET to celebrate After Affects’ massive impact on the industry.

Here's the overview movie for Ae & Me:

Michele Yamazaki posted a 2-part discussion, In Depth: Noise/Grain Plug-ins for After Effects, Final Cut and Other NLEs. It doesn't compare products for quality or speed, but it's a handy wide-ranging guide to essential solutions. It would be great if Adobe opened up the Mercury Engine to 3rd-party tools, or added their own solution based on AE's Remove Grain or Lightoom. Remove Grain is quite old in computer years, though not as old as a Median filter, as seen below in one use:

Chris and Trish Meyer have several new After Effects Apprentice free videos, including: 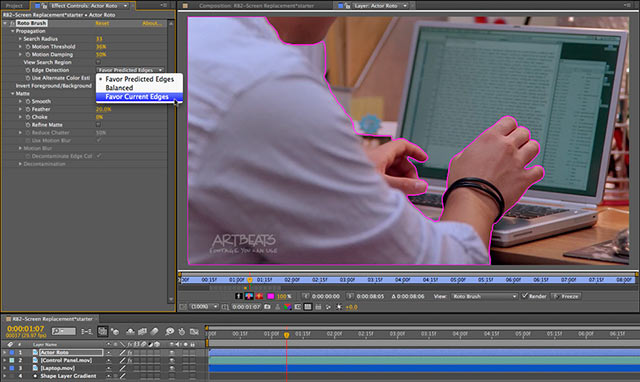 Red Giant started the year with several new tutorials. Episode 88: The Making of Form 17 features Seth Worley behind the scenes of his movie Form 17. In Episode 90 – Tempo: The Bees Knees – 3D Bee Swarm w/ Slow Motion FX, “Harry Frank will walk you through creating a swarm of bees using a combination of Cinema 4D, Trapcode Particular and Form, as well as tracking the camera motion, compositing the bees, and ramping time for slow-motion effects.”

Then, in Episode 91 – Tempo: Fresh Meat – Keying & Compositing the Cow, “Aharon Rabinowitz shows you how he took footage of a cow in a grassy field and composited into the laboratory scene in our short film, 'Tempo.'”

Create a World Traveler Animation to Show Where in the World You’ve Been, by Jorrit Schulte, looks at mapping layers on a sphere and creating a line that travels the globe using expressions. “Because of the 2.5D nature of After Effects, there are some interesting technical challenges to solve along the way.”

In How to Create a Dramatic Basketball Court Scene, Helio Vega creates a 3D basketball court scene using 2D elements and Trapcode Particular. The 1st part places the elements does the camera animation; the 2nd part covers using the basketball particles and other scene adjustments.

How To Use 3D Tracking To Save Time Rotoscoping, by Musat Adrian Bogdan, creates unique silhouette cut outs from footage by rotoscoping the bodies and a 3D environment in order to integrate the silhouettes over the original people.

Maxafter has some free templates to go along with his many tutorials. Here's a sample:

After Effects Tutorial: Subtle Ripple by Jason Hadley uses AE's built-in Wave World. Wave World was also featured in The Pusher by Eran Stern and Dunk Your Logo in a Wave World by Adam Everett Miller.

@patInhofer noted OpenColorIO (“OCIO”), an open source system for managing color in film production pipelines that includes an After Effects plug-in contributed by Brendan Bolles, who updated the AE version last week. Here's a bit more, including a tidbit from fxguidetv-116 (after minute 25):

“OCIO provides a straightforward and consistent user experience across all supporting applications while allowing for sophisticated back-end configuration options suitable for high-end production usage. OCIO is compatible with the Academy Color Encoding Specification (ACES) and is LUT-format agnostic, supporting many popular formats.”

19lights shows a workaround for working directly with native RAW files from the BlackMagic Cinema Camera in Ginger HDR: RAW and CinemaDNG Workflow with Premiere Pro and After Effects.

Dylan Winter posted Use sine waves to create intermittent states in After Effects. He says: “Math is fun! This time, we’re going to set up a sine function of time in After Effect and use its value in an “if” statement to toggle between different possible states for that object. In this case we’re just moving the x position of a layer around but imagine using the same technique to switch up a time remap expression to give your layers that randomly hand-drawn feel or toggle colors. The use cases are endless!”

The New Yorker featured Adam Green's A Pickpocket’s Tale: The spectacular thefts of Apollo Robbins. Here's how Robbins dances with the camera (What Lies Beneath: article), which in this case is the mark's focus: