A sneak peek at some of the new features planned for the next version of After Effects (plus Premiere Pro).

In preparation for the 2014 NAB Show, Adobe is previewing the features slated for the next versions of their video software. We’ve had a chance to work with the upcoming version of After Effects CC, and are in the process of creating a new set of training videos showing how to take advantage of these features that should be available in a few weeks. But rather than make you wait, here are some highlights of what’s in store.

A main focus of these upcoming releases is strengthening the integration between Premiere Pro and After Effects, trying to make it easier for an editor to tap AE’s power. A nice step in that direction is the introduction of Live Text Templates. An After Effects user can create a composition or chain of comps that includes text layers (among others), lock the layers you don’t want the editor touching (such as maybe the title of a show) and keep unlocked those you do want them to edit (such as a presenter’s name for a lower third). Then you set a new switch in Composition Settings to designate the project and this comp as a Template: 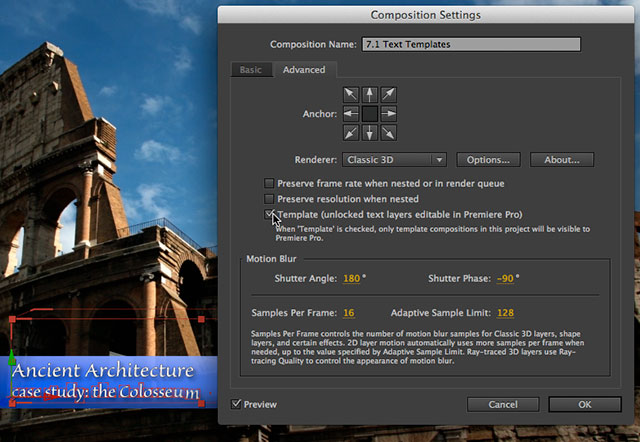 Only comps tagged as Templates will be visible in Premiere Pro. (footage courtesy Artbeats/FootageHub)

After saving that After Effects project, a Premiere Pro user can import only enabled template compositions from that AE project as assets into Premiere Pro. Once this asset is opened in Source (not Program) window, you can access its Effect Controls and edit the text of the unlocked layers without touching the font, styling, or animation: 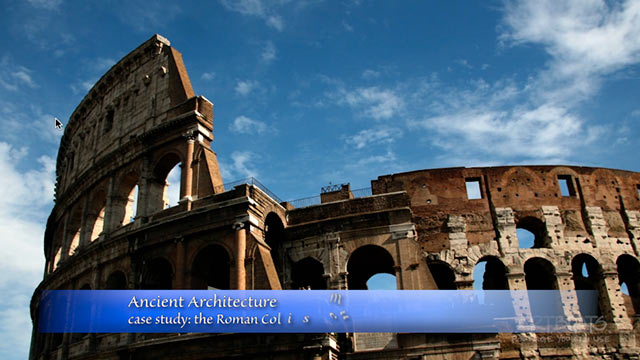 This asset can be duplicated in the Premiere Pro Project panel, and the duplicates can be edited separately to create multiple versions of the template. This is a far better workflow for lower thirds and the such compared to the current need to create a unique After Effects composition per lower third element.

Additionally, the new version of Premiere Pro allows simple rectangular and ellipse masks to be created for layers as part of its default Opacity “effect” as well as for each video effect you add to a clip. These masks have Feather, Opacity, and Expansion parameters familiar to After Effects users, and also have the Rigid Mask Tracker added to After Effects CC in its October 2103 update: 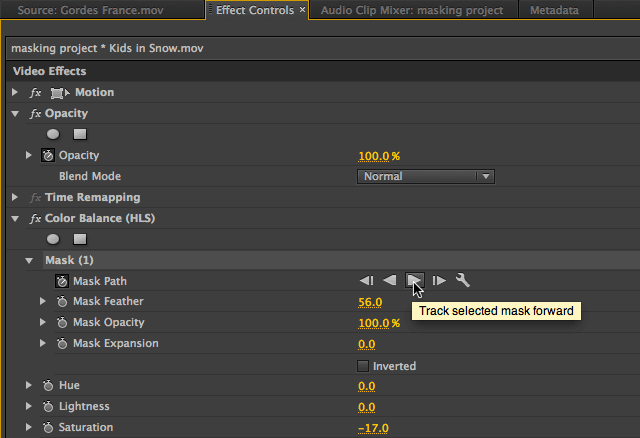 Simple masks can be created in Premiere Pro; they can also track and adapt to simple planar shapes as they move from frame to frame 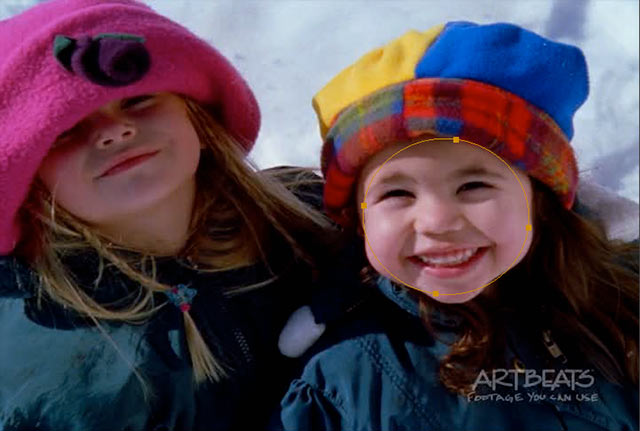 These are translated to normal After Effects mask shapes when you replace the clip with an After Effects composition from within Premiere Pro or otherwise import a sequence with those clips:

The After Effects mask above was translated from Premiere Pro's masks, keeping its feathering, opacity, and other parameters

A side effect of this workflow is that the masks and effects do not remain in Premiere Pro as a result: Once you’ve converted a Premiere-masked clip to an After Effects comp, you can no longer edit the mask inside Premiere – but of course, you can still edit it in After Effects, where you can take advantage of AE’s more powerful masking features such as variable width feathering.

Did you notice the little “fx” icon next to Mask 1 in the figure above? That is a clue to one of the nicest new features in the next version of After Effects CC: Every effect gains a Compositing Options section. This will allow you to select a mask shape that will constrain what area of the image an effect is applied, as well as set an Effect Opacity (akin to the Blend With Original parameter some but not all effects have). Note that Compositing Options will not appear in the Effect Controls panel; it appears in the Timeline in After Effects:

This is going to save a lot of layers in compositions where previously you had to duplicate a layer and separately mask an effected version of the source over an untouched version, or perform other similar workarounds with adjustment layers and the such. Feathering and other properties of the selected mask apply to the effected area; you may also assign multiple mask shapes to an effect by using the + and – buttons you see in the Switches column on the same line as the words Compositing Options. Yes, Boris Effects has had a similar option for a long time in their Continuum Complete plug-ins; the nice thing is that this new feature applies to every effect applied in After Effects, including third party effects. 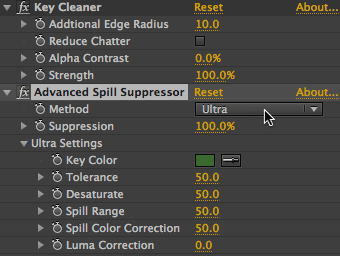 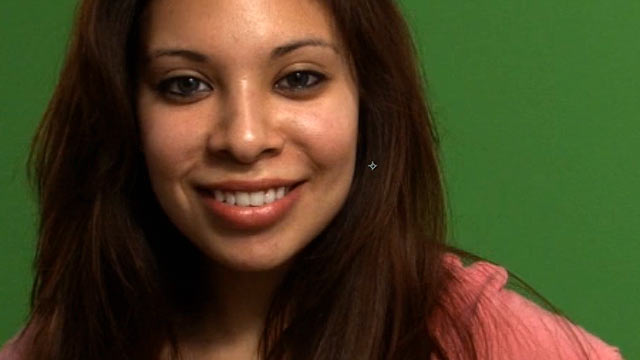 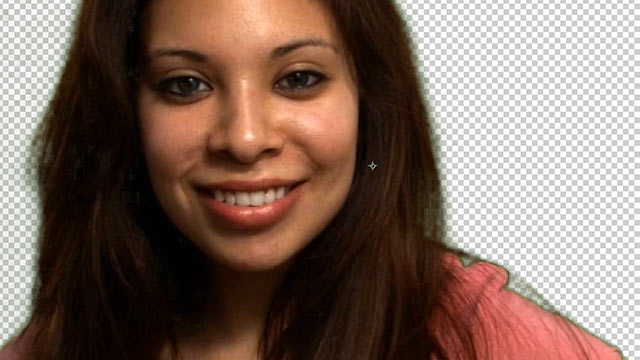 Keyed: Notice the overly-smoothed details around the hair that result from Keylight's default settings 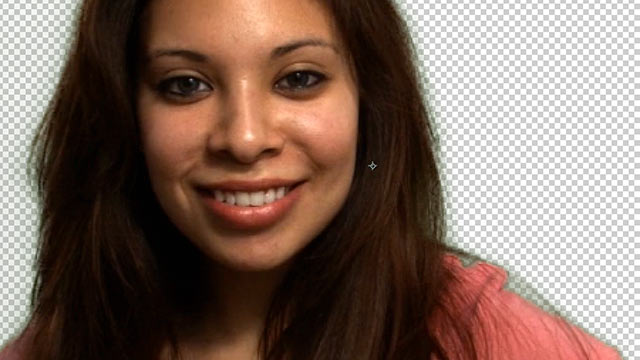 With the new Key Cleaner effect enabled: Notice some of the hair detail came back, and in general the edges are cleaned up 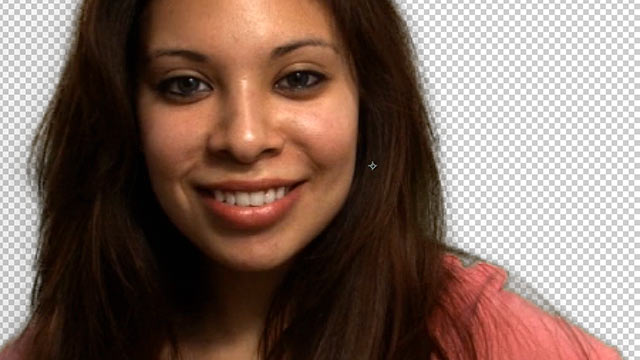 Spill Suppressed: The Ultra method yielded slightly better results with this clip, providing more contrast in the semitransparent areas of the hair; the standard mode works fine on most clips. 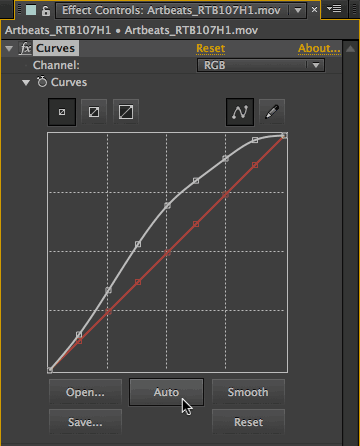 The Curves effect is also receiving a long-awaited overhaul in this upcoming release. The user interface has been cleaned up, and includes a resizable curve graph and direct access to the individual color channels. There is also an Auto button which performs adjustments, according to Adobe, “based on a database of curve adjustments performed by color and photography experts on a broad range of input images” using the color distribution in the image. In our limited experience with this feature so far, it provides a useful starting point for your corrections unless you have a specific potentially non-standard adjustment in mind.

A couple of broader integration features are also coming to next version of After Effects. Adobe TypeKit – which allows you to install and access fonts online (particularly a boon when someone hands you a project using fonts you don’t currently have installed) – will start to be integrated into After Effects. As a result, After Effects will install fewer fonts itself. In this release, opening a project without an installed font will prompt you to look for it using TypeKit; you can also open TypeKit directly using File > Add Fonts from TypeKit: 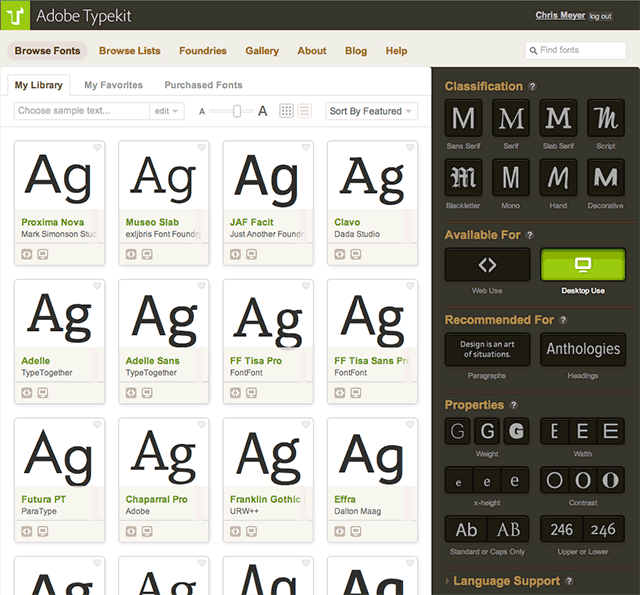 As you can see from the screen capture above, the user interface provides a lot of nice ways to search for fonts, including by “classification” (script, decorative, etc.) and recommended useage. The “Web Use” indicator means a font can be dynamically loaded by a web page; the “Desktop Use” indicator means you can download the font and use it in a design application such as After Effects.

We were initially a little leery of online connection requirements, as some production houses quarantine their machines to shield them from viruses and to prevent potential secret projects from leaking out, but we quickly confirmed that you do not lose use of a desktop font if the internet is disconnected after downloading.

Also, the next version of After Effects CC will allow user interface panels to be created using HTML5 and the CEP (Common Extensibility Platform – formerly known as CSXS) format, which should open the doors for other products such as training and stock footage to be directly accessible inside After Effects as it currently is in Premiere Pro and other Adobe software. One of the first signs of this will be an implementation of Adobe’s Kuler tool for picking colors and color themes.

Those are the biggies from our perspective; of course, every release of After Effects sees a slew of features additions and improvements. Another slated for this upcoming version include using the Mercury Transmit functionality from Premiere Pro to be used in After Effects for previewing your work on a second monitor, replacing the old QuickTime-based system. This should see a very appreciable improvement in performance, including greater bit depth as well as higher frame rates for larger frame sizes. The new version will also allow the import of Sony RAW footage, as well as MPEG-4 SStP Sony SR files. There will be updates to scripting and the performance of expressions. And there will be new HTML5-based panels directly inside the application, allowing all sorts of add-ons from training companies, stock footage providers, and the such (including Adobe's Kuler which should be installed along with the next version).

We’ll know more as we get closer to the yet-unannounced release date. But in our limited experience with it so far, this is indeed turning out to be another useful update, especially if you also use Adobe Premiere Pro (indeed, using Premiere Pro as the hub and After Effects as a designated heavy hitter was the theme of our latest video training course, Enhancing Production Value).

In the meantime, Adobe has released a lot of preliminary information of their own (including on their always-essential After Effects blog, and will be hosting a free webinar on April 10 covering the new features in their video software – click here to pre-register.