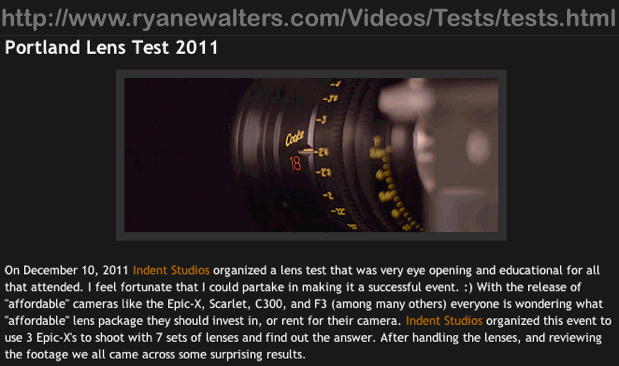 Three DPs ran a series of tests on EPIC cameras at full 5K resolution, and cinematographer Ryan E. Walters has posted the results, including carefully-compressed 1080p video clips, at www.ryanewalters.com/Videos/Tests/tests.html. He also describes the methodology of the tests, and lists the reactions of the participants to each set of lenses.

If that’s not good enough for you, you can download the camera original R3D files and play with them yourself (they’re downloadable on a per-lens basis, with the links listed in the lens summaries following the video clips).

There’s over 85 minutes of footage—this is a feature-length test.

Very nice work, and well worth viewing… and bookmarking for later reference.

My only additional comment is that the EPIC is a very flarey camera, at least the couple that I’ve seen: lots of shiny metal between lens mount and sensor. Some of the flare in Test #2 may be specific to the EPIC; put these same lenses on a RED ONE or an Alexa, and you might not see quite the same amount or kind of flare. You may consider this a plus or a minus, depending on your affinity for the work of J. J. Abrams…

Disclaimer: I have no material connection to Indent Studios or Ryan E. Walters; I’d never even heard of ’em before seeing a reference to these tests on the cinematography mailing list.

The graphic illustrating this post is a screenshot of www.ryanewalters.com/Videos/Tests/tests.html with the URL added in. I stole it fair and square under the fair use doctrine but will happily remove it if Mr. Walters objects!