On Twitter, Chris Zachary asked What do you wish you learned earlier when you started with After Effects? He got a good bunch of answers, and expression and the graph editor came up a lot.

What do you wish you learned earlier when you started with After Effects?

In Cavalry vs. After Effects – Graph Editor [Animation Curves] (now missing), Nick Ritter takes an anecdotal adventure demonstrating the animation curve interface in Cavalry compared to After Effects.  Perhaps Adobe should take note of complaints about “the awkwardness of dealing with After Effects” graph editor. Mr. Ritter has taken his video down, but there’s another from Chrome Lion, and an explanation for AE from School of Motion.

Cavalry is another contender for the mograph/compositing desktop app crown, but so far despite grumbling about Adobe, it’s made less a dent than previous challengers like Puffin Commotion or Luminaire-Autodesk Paint/Effect.

3D models from dimension – After Effects Tutorial from the Eran Stern video course on Lynda/LinkedIn, After Effects Weekly. Be aware that this video changes every week!

There were some smaller updates to Premiere Pro, Audition, and After Effects in May 2021.

In After Effects: The MAGIC of MOGRTs | Adobe Video Community Meet-up, you can learn a bit about how to work faster and level up content with Motion Graphics templates in Premiere Pro and After Effects, with the After Effects Product Manager, a QC engineer and an AE instructor. 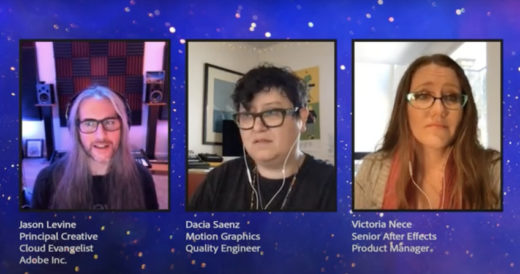 There was a May 19 update on Multi-Frame Rendering from Adobe’s Sean Jenkins. In the current few weeks, they’ll be rolling out beta features, including rendering AE compositions in Adobe Media Encoder, Speculative Preview (automatically rendering in the background), and Render Queue Notifications. Here’s the Puget Systems interview on MFR:

NFTs, covered in the previous roundup, were explained for artists looking to get into the game by Justin Cone early this year in The skeptics’ introduction to cryptoart and NFTs for digital artists and designers.

School of Motion scheduled their Workflow Show: Performing Motion Design with Adobe Character Animator for May 28, 2021. It features Adobe’s Dave Werner (aka @okaysamurai).

Here on PVC, Karl Soule explained how Productions and Team Projects are the same and how they’re different, with videos, in Productions versus Team Projects: Which Adobe Premiere Pro remote workflow is right for you?

Ben Marriott shares his list of The Ultimate Dose of Animation Inspiration | Best Motion #7. It’s a  showcase of some of the best motion designs of the last month, and has a lively comment section.

VFX Firsts is a new podcast at befores & afters, scheduled weekly, and looking back at major pioneering moments in visual effects with expert guests who work in the particular area of focus of each episode. The first tackles the question: ‘What was the first film to use a cloud tank?’, with special guest Gavin Graham, DNEG Montreal general manager. If you haven’t seen it, check out Scott Squires’ Effects Corner blog post, featuring cloud tank instructions based on his experience creating the effect for the movie Close Encounters.

It’s always nice to see someone use Ball Action to its fullest, as does Creation Effects in How to Make 3D Particle Animations without Plugins (After Effects Tutorial). The author has created a template called Pixel Pusher with over 40 presets for the often overlooked CC Ball Action effect.

Build particles in After Effects without any plugins! by Workbench is telling the truth. Sometimes you need just a little bit of floaty bits to add to a scene, and if for some crazy reason you don’t like the built-in Particle World plug-in, you can hack your own cloud with text animators.

Alex Lindsay’s Office Hours posted Focus on CamTrackAR by FXHome 5/3/21 features CamTrackAR by FXHome, an iPhone app that allows you to import USDZ and track your shots into a virtual scene. Josh Davies from FXHome was on the 2nd hour of the show to discuss the app and show us how it works. Film Riot also had an explainer, using After Effects, 3D Track Your Footage with Your Phone:

Abstract Shapes Animation DEEP-DIVE | After Effects Tutorial by Manuel does Motion shows you how to animate abstract shapes to get transitions, organic moves, and the timing of this animation right. Along the same lines is Advanced Shape Layer Techniques in After Effects with Alex Deaton.

The Kuleshov Effect is SO WRONG! claims that the “biggest editing concept” needs a new name. This “The Science of Editing” series by @ThisGuyEdits hosts Dr. Karen Pearlman. In a humorously ironic 1964 rebuttal, if you will, Hitchcock Explains the Kuleshov Effect to Fletcher Markle. Don’t worry girls, you already have your revenge: Suicide Squad got more Oscars than Hitchcock.