When recording audio on a smartphone, tablet or some standalone audio recorders, we are often better served by recording in mono, even if the final distribution will be stereo. 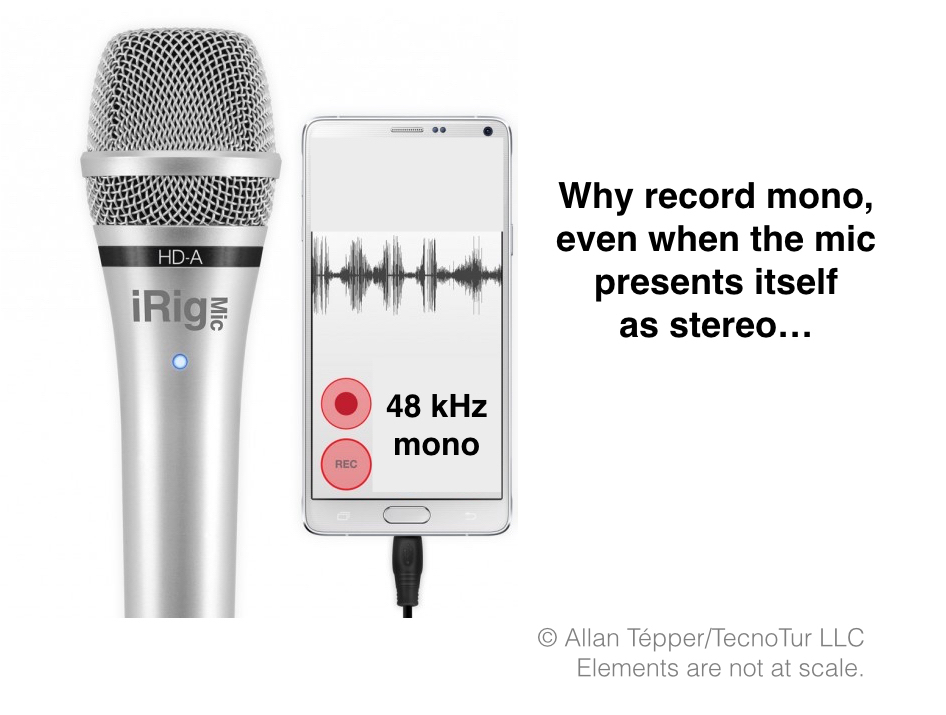 As I have shown in many past articles, there are many mono (i.e. non-stereo) digital mics that can be connected directly to your smartphone or tablet digitally, thereby bypassing the phone or tablet’s typically inferior preamp and A-to-D (analog to digital) converter. The same applies if you connect an analog mic (via digital converter) or audio mixer (traditional or automatic) with digital output or via an external digital converter to your smartphone or tablet. This article explores many reasons why we are often better served by making the raw recording in mono, even if your final show is to be in stereo. It also covers mobile audio recording apps that permit recording mono from the many digital mics that misrepresent themselves, presenting themselves as stereo when they are really mono, and those that given that situation sadly force us to record “stereo”, whether we like it or not.

In case you are wondering, the mic illustrated in the main image of this article is the iRig Mic HD-A (reviewed here)

and used to record the video in my very recent Branded windscreen vs mic flag: let’s compare , illustrated above), is the version that includes the special USB OTG cable that works with some Android devices, and a standard USB-A cable for connecting to desktop computers and laptops. The original version of this mic is called iRig Mic HD (reviewed here) officially includes a Lightning cable for iOS devices (iPad/iPhone/iPod Touch) and a standard USB-A cable for desktop computers. The original version (which is now discounted to under US$100 on some sites) officially does not include the special USB OTG cable. However, at least one end-user review listed there indicate that the original one of the mic now includes the special USB OTG cable too. Your mileage may vary.

Advantages of mono recording, even if the final show will be stereo

If you are making an audio-only recording from a single mono microphone to be edited later, there are at least four important advantages to record in mono (monophonic) instead of stereo (stereophonic), even if your final show will be in stereo (due to stereo music and effects):

The only possible exception to the above is if you want to do audio bracketing, where an identical recording is made at a lower level, as a safety in case someone unexpectedly screams and causes the audio to peak. However, this technique doesn’t apply with any of the many digital microphones I have tested to date when recording on mobile devices, since I haven’t found any that will allow bracketing with any app I have seen so far for Android or iOS when connected to a mono digital mic.

Of course, this does not apply at all if you are broadcasting live or recording live-to-drive, which is something that both Bossjock Studio (reviewed here) and Spreaker Studio allow. In those cases, your show recording will be stereo and will include the stereo music and effects, and that is something I applaud about those apps, since they are indeed designed for creating the final show on the fly, not for recording raw clips to be edited later. Those can be pre-edited and pre-produced in advance of the live show, and then be imported into either of these apps as a pre-recorded audio package. 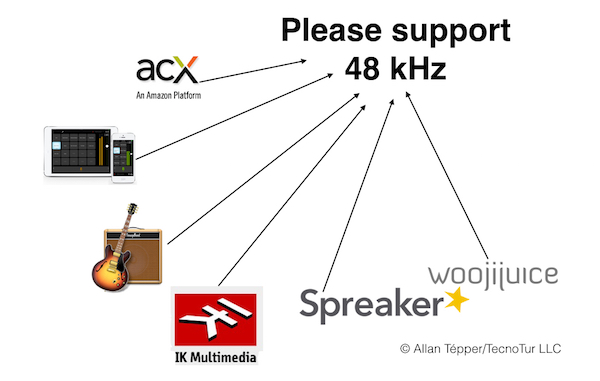 However, I must remind you that as of publication time of this article, sadly neither the Bossjock Studio app nor Spreaker Studio apps allow 48 kHz recordings, despite my private requests and an open letter where they were both listed as recipients, All audio production & distribution should go 48 kHz. Learn why., which is illustrated above. Fortunately, many other apps for Android and iOS do support 48 kHz recording, including all of the ones listed in the next section of this article.

As of publication date of this article, Auphonic for iOS (reviewed here) sadly forces us to record stereo when it has selected a mono digital mic that presents itself as stereo. However, Auphonic has told me that it will add the mono option in a future update.

RØDE Rec for iOS (reviewed here) fortunately allows us to record mono, even when it has selected a mono digital mic that presents itself as stereo. (It can also record stereo.) RØDE Rec for iOS is used by voiceover talent Dmitri Michas, as indicated in the review.

As of publication date of this article, ShurePlus MOTIV Mobile Recording app for iOS (reviewed here and here) sadly forces us to record stereo when it has selected a mono non-Shure digital mic. This app only allows the option to record mono from a Shure digital mics. The company has replied that it won’t comment on possible future updates to the app.

Although I have not tested it personally to date, Melvin Rivera Velázquez of Cambio 180 uses and endorses TwistedWave for iOS. According to the response I received from the developer’s customer support, TwistedWave for iOS fortunately gives us the choice of recording mono, even when it detects a stereo digital source. (It can also record stereo.)