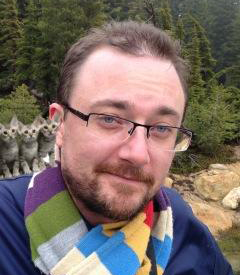 Al Mooney, senior product manager for Adobe Premiere Pro, has a long history in digital video editing and has played his part in the evolution of the NLE. Mooney grew up in the Southwest of England and studied music and sound recording at the University of Surrey. Starting out as a broadcast engineer, he went on to work for Digidesign (part of Avid Technology) and then Apple in the UK in sales and business development work. Mooney has been product manager of Premiere Pro since 2010.

With the launch of the 2014 versions of the Creative Cloud applications, I sat down with Al to talk about the past, present, and future of Premiere Pro and video editing in general.

How did you get into the world of film and broadcast production?

The original plan was to be an audio engineer in music. I studied audio engineering and, as part of my degree, worked a year for a German broadcaster as a sound designer. While there, it became pretty obvious that working in recording studios wasn’t for me – in part because I quite like things like daylight and eating. So when I finished my studies I went to work as a music product specialist at Digidesign. My interests evolved from there: at first I started to get excited about audio for pictures, and then pictures themselves.

You’ve been the Premiere Pro product manager since CS 5.5. What were your objectives for the application when you were overseeing that release?

It was pretty clear to me – and I don’t think I was alone in this – that we had a great engine but a pretty ugly car. I wanted to make driving Premiere Pro delightful: I wanted to make people swoon when they looked at it. 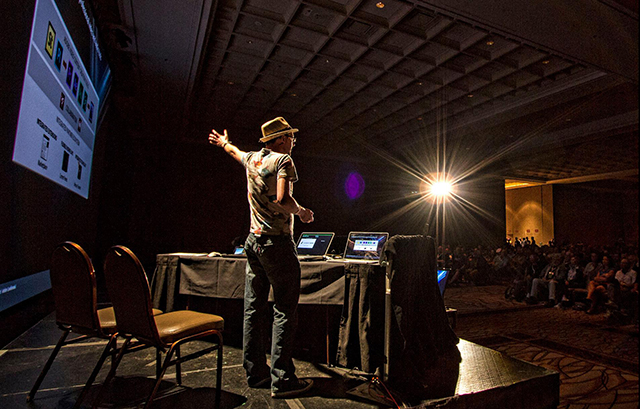 Where are we today in the evolution of the NLE?

In terms of professionals, there are a number of big themes we’re seeing. More and more editors need to work with higher-resolution footage, most notably 4K but sometimes higher than that. Editors expect to be able to sit in front of their NLE and cut 4K – or even 5K – just like they do with SD or HD. And they should be able to do that! Making it work should be our problem, not theirs. Whenever an editor has to think about the technology, rather than the creative task, I think we’ve failed.

Another interesting theme is color, which has become such an important part of the entire workflow, and no longer something that people just think about at the end. Editors expect to be able to work creatively with color from the very beginning of the process.

Aside from the needs or established professionals, there is also a whole new group of people becoming creative with video and who aren’t necessarily using NLE software to do it. I think the way people express themselves with software like Vine and Instagram is fascinating. So while I think there will always be a place for high-end, deep video editing apps, we’re seeing exciting changes in the way people use video in general.

Where do you see the 2014 release of Premiere Pro in terms of that bigger picture?

We’ve been focusing on higher resolution workflows for a very long time, and we make improvements every release. Alongside new format support, we’re always working on providing our customers with the best performance possible. Like I said, editors expect to be able to cut 4K just like they can HD, and the addition of the GPU debayer for RED media enables editors to cut RED incredibly fluidly.

In terms of color, we also made big improvements to Direct Link, which allows editors to dip into a powerful grading application at any point during the edit, without relinking or exporting anything. You can just open the project in Speedgrade and work with it. I’m really proud of what we did with that workflow. 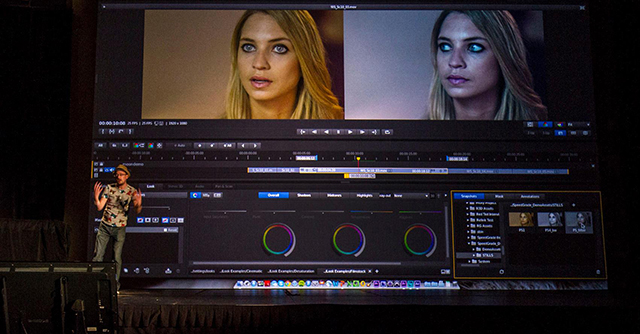 There’s been a lot of talk about the tighter integration with After Effects with new features like Live Text templates and Masking & Tracking. Why was this important?

We care a great deal about listening to and engaging with editors, and we heard loud and clear that there are certain effects-related tasks which editors often need to do many times a day. The Dynamic Link workflow between After Effects and Premiere Pro is extremely powerful but for things you need to do often and quickly it can be too much effort to go back and forth between applications. It wastes time and takes you out of the ‘editing mindset'. Also not every editor knows their way around After Effects. Editing text in AE comps is something many editors wanted to be able to do in the NLE. And it’s the same with masking and tracking – we heard that blurring of faces and license plates was hugely important, so that’s what we focused on.

I am hugely proud of the way our engineers built Masking and Tracking into Premiere Pro. While we knew that blurring was crucial, our teams put the new functionality at the core of our effects engine so that the feature is capable of so much more than just blurring things out. 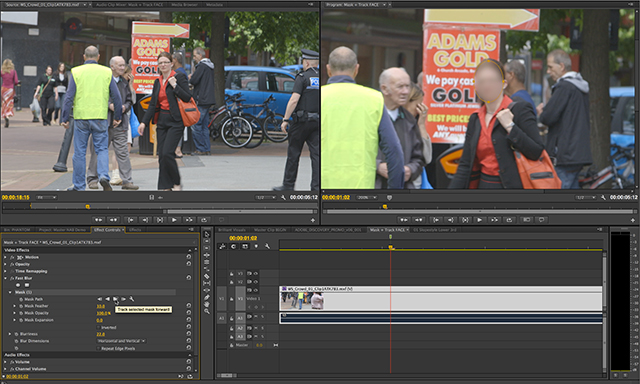 Masking and Tracking, powered by After Effects, was introduced in the 2014 release of Adobe Premiere Pro CC.

Are there any other features in the 2014 release that you are excited about?

I think the ability to have multiple Media Browser panels might be one of the best sleeper features. You can have as many as you need, browsing to your media directories, or, perhaps even more usefully, browsing to different projects. It’s a bit like having the Project Panel of another project open in a Media Browser, and as such you start to see a pretty powerful multiple project workflow. We also added Favorites to the Media Browser which I think a lot of people will find very helpful.

What are some of the other highlights for you in the most recent release of the Adobe video applications?

I mentioned improved Direct Link and I think that’s a huge feature for editors. I want them to be really comfortable in SpeedGrade and it’s really getting to a stage where SpeedGrade feels like an extension of Premiere. Also I’d be crazy not to point out the spill suppressor technology in After Effects, which has caused many jaws to hit the floor in demos I’ve seen.

From a product development point of view, what do you think of Creative Cloud so far?

It’s so much fun, to be honest! This is really about the evolution of software itself. Changes come so fast these days and Creative Cloud gives us a framework to continually develop the tools, rather than being limited to a rigid 12 or 18-month schedule. Now we can release features when they’re ready – and when our users need them.

How do you feel has the Creative Cloud model has worked for users?

Professional users need tools that keep up with their world. In a fast moving industry, the Creative Cloud model has been an ideal fit for Premiere Pro –  well all our video apps, really. Creative Cloud brings us much closer to our customers and product development is closely tied to user feedback. It’s much more of a partnership now with a lot more ongoing contact than we used to have.

Overall Creative Cloud membership is growing faster than we expected. Video pros in particular have been upgrading to Creative Cloud at an incredible rate. I’m really proud of that.

You’ve had plenty of personal experience with competing NLEs. Why should users consider switching to Premiere Pro now?

There are so many reasons! Our industry-leading native format support. Our amazing integration with other Adobe apps like Photoshop, After Effects, SpeedGrade. Our rich, diverse third-party ecosystem. Our speed of innovation. My cat. The list goes on! 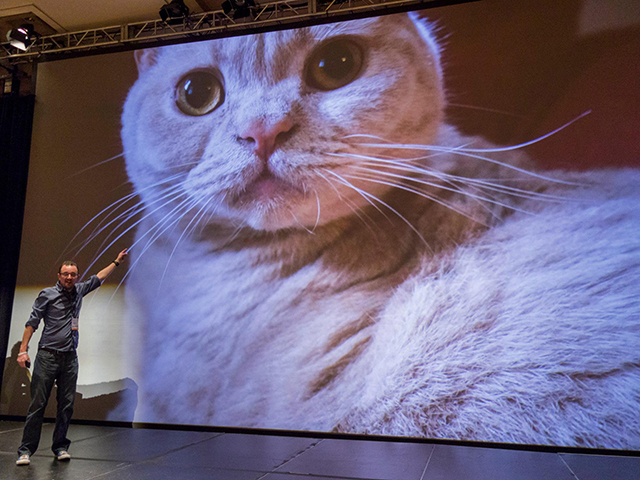 Mooney often jokes about his beloved cat Cloud (yes, that’s its real name) and is famous for wearing cat T-shirts during presentations.


What do you love most about your work now?

I love how engaged we are with the community. I adore speaking at user group events, showing off what we’ve been working on and gathering feedback from editors. I also have to call out the amazing team I work with – the amount of skill and knowledge in the Premiere Pro team is mind boggling. I’m so lucky to be part of this group of people.

Where do you hope to take Premiere Pro in the future?

To infinity and beyond! I want this product to be synonymous with video production. I’m jealous that Photoshop has become a verb – I want people to say ‘I premiere pro’d it!’

Join Al Mooney for the Premiere Pro World Conference, July 11-13 at the Adobe headquarters in San Jose – enjoy cutting edge training and a chance to meet and chat with Al and the Premiere Pro team. Register here.

Learn more about the 2014 release of the Creative Cloud video applications.