And they are airing that commercial on broadcast television

Here was a little bit of interesting editing and Adobe news that came across the internet recently. Adobe has made a television commercial to promote Adobe Premiere Pro. We’re talking an actual over airwaves, cable and satellite broadcast tv commercial that will air on straight-up lean back broadcast tv.

The spot is called “Fantastic Voyage | Adobe Premiere Pro” and if you’re like me, your first reaction was wow, they spent some money on that. You second reaction might have been thinking about how much of the spot was done in After Effects. Of course the initial cut of any effects heavy spot is done in an NLE and this one was done in Premiere. But my third reaction was a real surprise that Adobe would take this to traditional television with the spot airing on “Jimmy Kimmel Live!, The Tonight Show Starring Jimmy Fallon, The Late Show with Stephen Colbert, The Late Late Show with James Corden, and during critically acclaimed programming on Adult Swim and FX.” 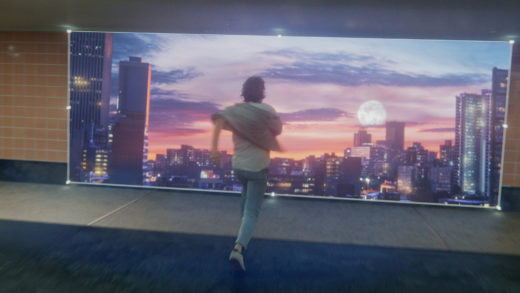 The production costs combined with the music rights and the ad buy tells me Adobe is serious as they continue the march into the democratized content creation future. Premiere isn’t a product you’re going to see a commercial about, download on your laptop and the in a few days create the spot above. It’s a complex beast to learn but in today’s video-driven world a spot like this might prompt someone who is just curious about video (and who already has a Creative Cloud subscription) to give Premiere an install and try their hand at editing. Is it a sly attempt at advertising into a niche that doesn’t get traditional advertising? Or maybe a preemptive strike against the ever growing editing base of DaVinci Resolve? You be the judge on that one.

I was surprised that Adobe Premiere Rush wasn’t included in this ad. If you’re targeting a mainstream audience who might be curious about video Rush feels like the natural jumping off point for someone watch late night tv. Then again if you’re actually sitting back and watching any television at all you’re probably in a different demographic than the mobile-first generation who probably is creating some of their own video anyway and knows all about Adobe Rush.

You might notice that the spot above is 1:15. That’s one minute and fifteen seconds which doesn’t fit into that traditional :30 second broadcast tv spot ad buy. I’m curious if this full version is airing on tv or if there is a cutdown for broadcast. If you’ve seen the spot on air please comment below and let us know.