with a decent showing of non-Adobe peeks

Just ahead of the 2019 NAB convention, Adobe has announced new features and performance updates for audio-video tools in Adobe Creative Cloud. New features include Content-Aware Fill for video, and new capabilities for titles and graphics, crafting animations, refining audio mixing, and organizing and preparing project media. 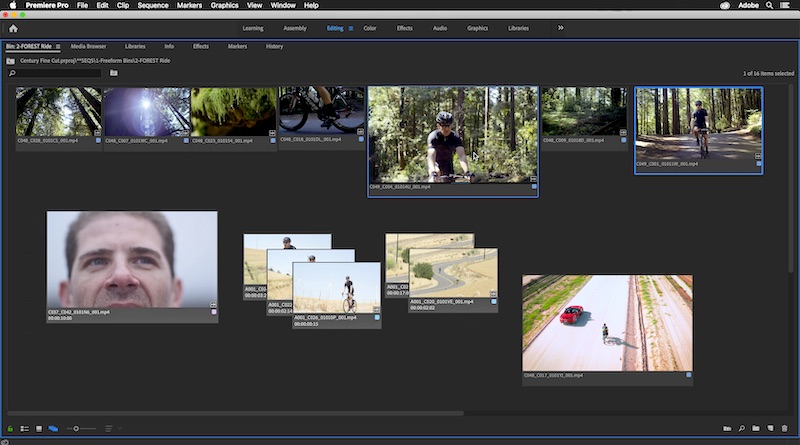 Some of the hundreds of performance improvements include faster Mask Tracking for effects and color workflows, dual GPU optimization and improved hardware acceleration for HEVC and H.264 formats in Premiere Pro. In After Effects, the enhancements also include GPU-accelerated effects, such as Change Color and Roughen Edges.

In a change of pace, the updates are available now (refresh your)! For a complete rundown by Adobe see the Spring 2019 Overview Blog: and videos. Additional videos by trainers and other users can be found below.

In line with Adobe’s tagline for this release, “Smarter Tools for Richer Storytelling,” new features in today’s announcement enables users to:

You can get a closer look at the new features and hear from industry experts at the Adobe booth (#SL5610, South Hall in the Las Vegas Convention Center) and at over 100 partner booths from April 8–11. Tune-in to Facebook Live with Jason Levine on April 4 at 9 a.m. PST to see more about what’s new.

There are additional useful info and videos from the community!

Content-aware fill (aka Project Cloak), like the RotoBrush tool, won’t be automatic, and we’ll be discovering what’s possible along the way. To help, School of Motion, Flomotion, and Jason Boone have videos at the ready. Premiere Gal (see end of section) added her take with some basic bread & butter examples. Robert Hranitzky also posted a video, How to remove objects in videos with Content-Aware Fill in Adobe After Effects, and Adobe posted an additional article,  Java Post Adds to its Invisible Effects Toolbox with Content-Aware Fill in Adobe After Effects by Michelle Gallina.

It might be good to start with Premiere Gal followed by School of Motion, but they all should be useful if you have the time to spare.

“For 360 VR projects, Content-Aware Fill for video is an indispensable tool since there is nowhere “off-camera” to hide crew, tripods or lights. Content-Aware Fill can also be used to salvage footage by eliminating visual distractions or fixing continuity issues, like a car driving through the background of a scene, dust on a camera lens, or a misplaced prop.” (Source: AE team PDF)

from Szalam on Reddit: “You probably already know that you can move your playhead around and keep on working on something else while it’s analyzing and rendering the fill sequence, but did you know that it’ll change which frames it’s rendering based on where the playhead is? What that means is, if you have a frame or two you really want to make sure it’s getting right, you can put your playhead on those frames and check them out before it goes through and renders the entire sequence.”

Expression Editor in After Effects

The new Expression Editor already has people complaining about speed sight unseen. Here’s Jason Boone with another peek, and Ukramedia with more detail:

Ryan Summers notes that the AE “team is crafting more access for third-party devs (Path point access = Hooker, Wayfinder, and others; Data as footage type = tons of new workflows; Scripting access to guides = GridGuide”) — and it’s creating awesome dividends for users. But he also wishes for “Shape Layers w/o infinite twirls, a Curve Editor like other pro software, and normal 3D navigation that encourages play & isn’t viewed through a blacked-out window.”

Mathias Möhl notes that Adobe just released After Effects 16.1 with new scripting features that allow grids to be scripted, so his GridGuide to be much faster. He’s celebrating this improvement with a 20% discount – only from April 4th to April 10th.

Also here on PVC, Jeremiah Karpowicz posted Meeting the Demands of Pro Editors: Behind the Adobe Premiere Pro 2019 NAB Updates with Patrick Palmer, who is responsible for the overall strategy of Premiere Pro CC and Adobe Media Encoder CC.

Cut To The Point discusses 28 New Features in Premiere Pro 2019.1 (April release) in his take.