Adobe Anywhere for video is an enterprise-only solution that serves collaboration and remote workflows with version tracking and project sharing for broadcasters and large facilities using Creative Cloud. This workflow lets you edit real-time without dropping a frame via fast WiFi on a Premiere Pro 4K timeline using original 5K .r3d files from remote server on a Macbook Pro.

Adobe Anywhere was recently updated, and some new explanatory videos are available. 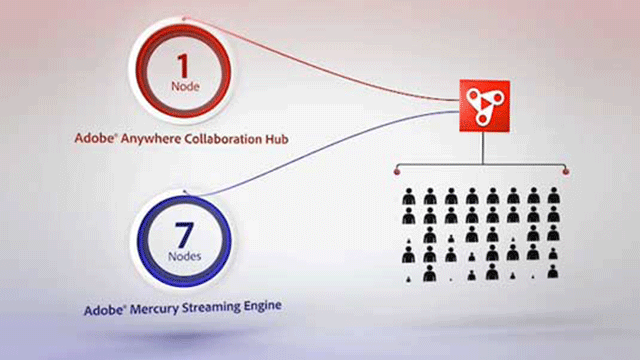 The latest update to Adobe Anywhere for video adds improved collaboration support for After Effects CC users and brings refinements to the Adobe Anywhere app for iPad, including new scrubbing gestures and sorting options. Also, a new streaming API allows facilities and broadcasters to integrate content from Adobe Anywhere into a variety of user experiences on the web or mobile devices. One example of that is the Dalet Xtend plug-in that lets Adobe Premiere Pro CC editors browse, access and share media and assets stored on the Dalet content catalog.

Some basics were rounded up in Adobe Anywhere released by Rich Young in July 2013, and this summer, the ever-dependable Oliver Peters covered Adobe Anywhere, as well as Avid Everywhere.

In addition, PVC recently posted a Q and A with Experienced Adobe Anywhere Users by Jeremiah Karpowicz.

◊ If you don’t have the approximately $150 grand to buy-in, check out the discussion by Victoria Nece, DIY Adobe Anywhere: Collaborating in After Effects and Premiere via a Synced Dropbox Folder

In the inaugural episode of 5 Things: Episode 101 – Adobe Anywhere 2.0, Michael Kammes of Adobe Anywhere partner Key Code Media (video) gave us the rundown. He even shares buy-in costs — $150,000 to start is not uncommon.

At IBC in September 2014, Adobe discussed Adobe Anywhere for Video: Collaborate Without Boundaries:

Earlier, Adobe’s Enzo Guerrera, a scientist at Adobe and one of the original creators of Adobe Anywhere, talked about it: