A good example of how VR can be used to connect audiences with creators, the new Adam Savage’s Tested VR, just launched for Oculus Quest and Oculus Go, is also a practical lesson in production for VR. 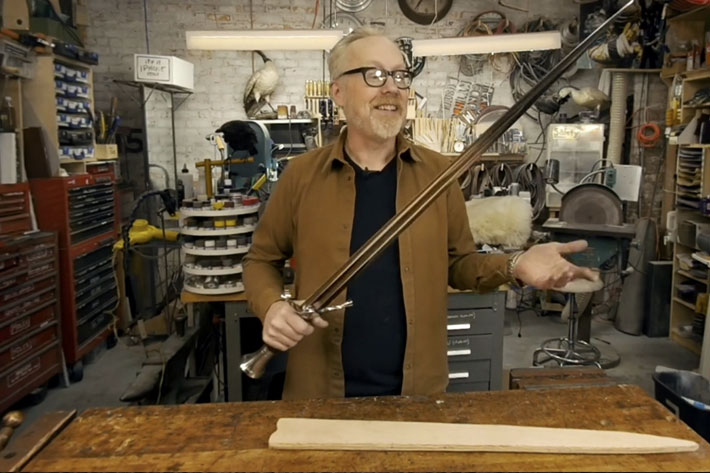 Adam Savage’s Tested VR is a FREE app that gives you a fantastic experience of what VR and VR180 can be, but it also served to test the VR180 camera rig assembled to shoot the 8 episodes.

Inspired by Adam Savage’s Tested One Day Builds, Adam Savage’s Tested VR takes audiences on a journey inside the creative workspaces of incredible makers, bringing their processes to life, from ideation to creation. The free experience (you can call it documentary) launched this month for Oculus Quest and Go, takes the public to the workshops of eight different artists:

The voyage you’re invited to requires a Virtual Reality headset from Oculus to discover this eclectic roster of creators including a Broadway and TV puppeteer and a cosplay animatronic wings designer. The eight episodes put viewers inside their workshops for an intimate look at their builds, and the whole  experience sounds a lot like going behind-the-scenes to visit the workshops of artists working for movie and TV production, because so much of what is presented is related to the art of make believe. 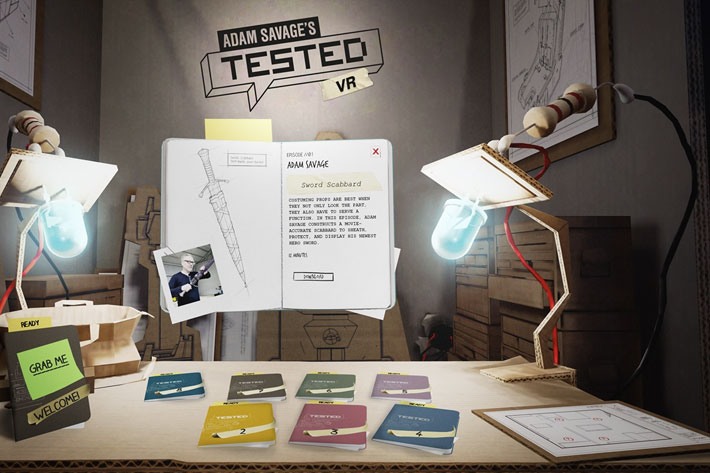 There is another aspect to Adam Savage’s Tested VR that attracted my attention. Besides the solutions used to film the episodes and show details of the action, you’re also given a chance to see some of the “behind-the scenes”, with takes that show aspects of the production work, and entice you to explore how it all was done. The app is also interesting because it uses a mix of Virtual Reality, for the cardboard desk in a reproduction of Adam Savage’s Cave, where you can interact with a series of objects, to VR180, used here as the solution to film each episode.

The mix of VR for the interactive parts and VR180 for the documentaries works rather well. According to Oculus, the whole project started one year ago, “when Adam Savage and Norm Chan of Tested fame asked themselves a seemingly straightforward question: What would a one-day build video feel like in VR?” The result is Adam Savage’s Tested VR,  8 episodes filmed with 180-degree stereoscopic cameras that allow for an immersive look at the creative process like never before. Bonus footage includes Adam’s “Cave” workshop tours, which you can “open” from the map on the desk, in the Virtual Reality section that is used as interface. 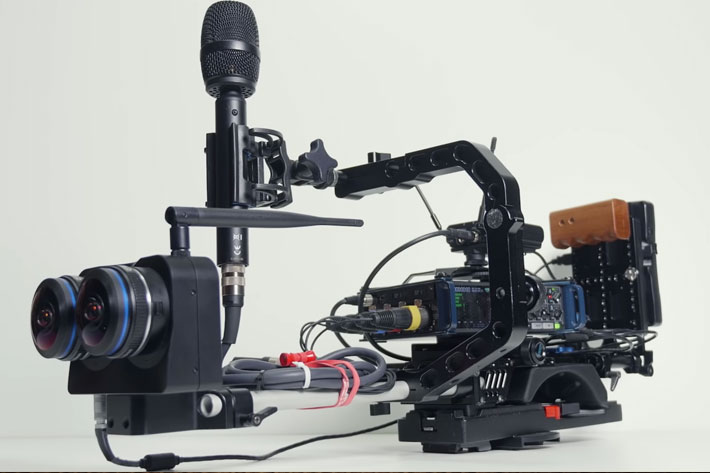 The production of Adam Savage’s Tested VR was a learning experience for everyone involved. Adam Savage says that “what I noticed when we watched that first four-minute build video in VR was an entirely new level of intimacy and immediacy. Sitting virtually across from the maker was leagues more instructive, intuitive, and physical than just watching it in 2D on a screen. Seeing the movement of materials and the movement of the maker’s hands in three dimensions was thrilling! VR is a game changer when it comes to more deeply covering the skills, stories, and problem solving makers explore when they set out to make something. It allows the viewer a seat at the bench as it were.”

Arriving to the ideal solution was not easy, though. Over a series of months, the team worked closely with Tested Producer Joey Fameli to design the right visual language to tell maker-driven stories in VR. “The Tested team has spent years working together and crafting a specific way to shooting One-Day Builds, but this excursion took us farther than we thought possible,” Savage adds. “I know VR has been around for a while, but it’s hard not to feel like right now is the dawn of a brand new narrative medium.” 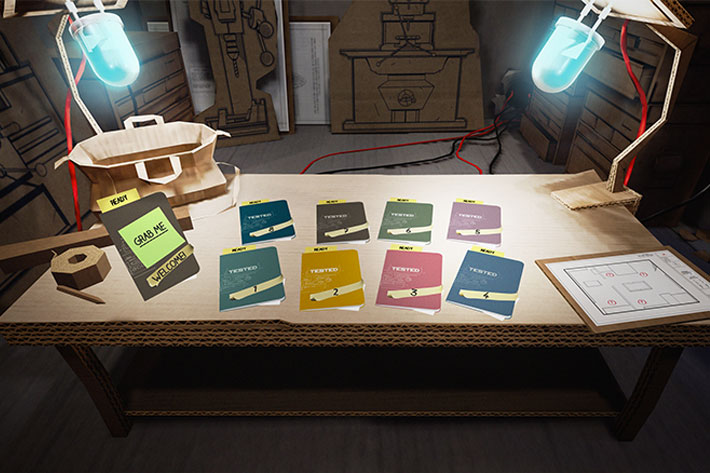 The intimate experience of  3D VR180

Watching the episodes with a VR headset, you’ll probably be disturbed by the sudden cut of the image, when you jump from  the 360 degrees VR workshop recreation to the VR180 used to capture the artists. It does make complete sense, though, because VR180 centers on the action you need to watch, so it would not make sense to cover the whole environment around you, as the center of attention is placed in front of your eyes. It’s like watching a screen, with the difference that the image is 3D. You’ve to see it to fully appreciate the way it works.

“We love the look and feel of high resolution 180° video, especially for the kind of intimate, informative experiences Adam and the team create,” says Immersive Media Lead for Facebook AR/VR Eric Cheng. “We’re excited to see what people think and to help other creators experiment with this format.”

Norman Chan wrote on Tested website that “We filmed a pilot episode using a stereoscopic VR camera system with an ambisonic microphone for spatial audio recording; the system was compact and versatile enough to be set up around the shop to follow the pace of a build. We learned a lot of fascinating lessons about VR filmmaking along the way–which Joey will be sharing in an upcoming video–but the resulting footage was undeniably compelling. You really get a sense that you’re in the workshop with Adam, hanging out while he’s building a new prop.” 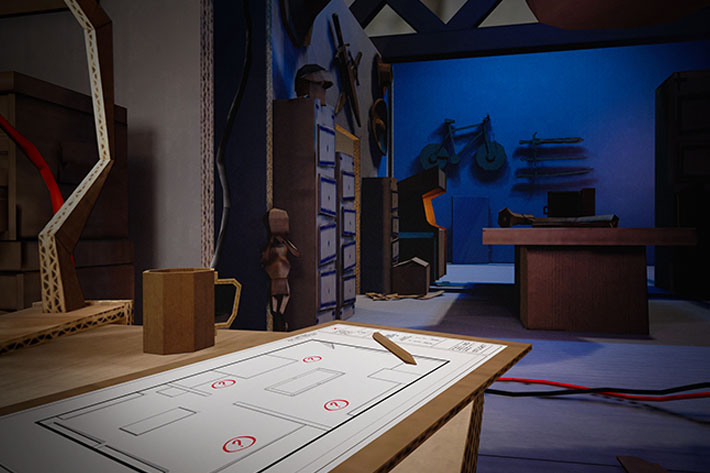 This app deserves the Oculus Rift

Adam Savage’s Tested VR is only available for Oculus Quest and Go now, but I sincerely hope it comes to the Oculus Rift S, as it makes no sense to keep such a good example of the potential of Virtual Reality for telling stories and showing documentaries limited to the less powerful headsets. The app really deserves the extra power available on the tethered Oculus Rift S to reveal the quality of the 5K 180-degree stereoscopic journey offered.

Tested Producer Joey Fameli was responsible for setting up the camera rig for Adam Savage’s Tested VR. He says that “while I’ve been exposed to VR from the early stages of development, I didn’t spend a whole lot of time in headset, with experiences. I’d check in on the tech, watch the improvements, and demo a few things, but most of what I saw was really angled towards the video game industry.” Joey Fameli also notes that “it always seemed like filmmakers were trying to retrofit their current production style to be viewed in a VR headset, instead of using new tools to complement the strengths of the platform”, an opinion I agree with, having seen some of the early production for VR. He adds that “I honestly didn’t think there was much room for live-action VR filmmaking before this” and it was only when he saw a demo of a 3D VR180 live-action experience  that “the potential really clicked for me”. 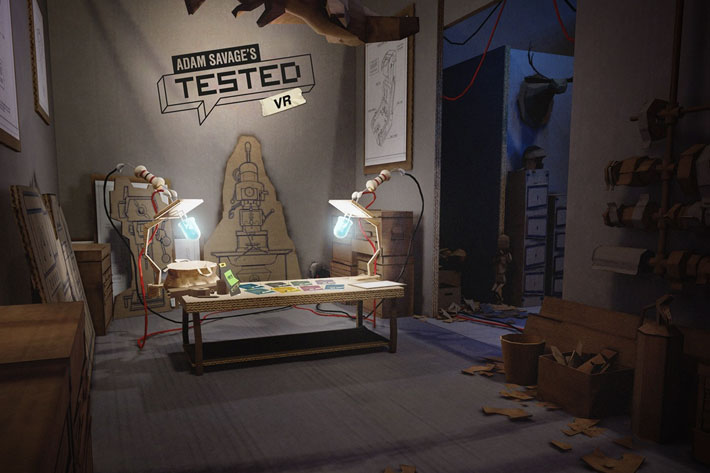 Having spent a large amount of time now in this production environment, Joey Fameli admits that “ he is excited to try new things and develop more material for it. Joey adds that “the normal videos we publish on our site are a wonderfully detailed look at the maker process, but there is something inspiring and exciting about being in the shop with a competent and talented maker. Tested VR does just that—it puts you in the maker’s space with them.”

While for the general public viewing the app is the most interesting part, filmmakers and anyone curious to know about the production process will want to know more about the rig used to capture the whole project. To coincide with the launch of Adam Savage’s Tested VR, the team published a 10 minute video on YouTube that shows what was used and how it was assembled.

In the video,  Tested producer Joey Fameli takes us behind the scenes in the assembly of the team’s new VR180 camera rig. Using a off the shelf Z Cam K1 Pro – which records stereo video at high resolution -Joey shows how he rigs up the camera with spatial audio microphone, recorder, and battery pack for on-location filming. He ends saying: “This is how we made the videos in the just-launched Tested VR app.”