When Sony can’t break the laws of physics, we bend them. 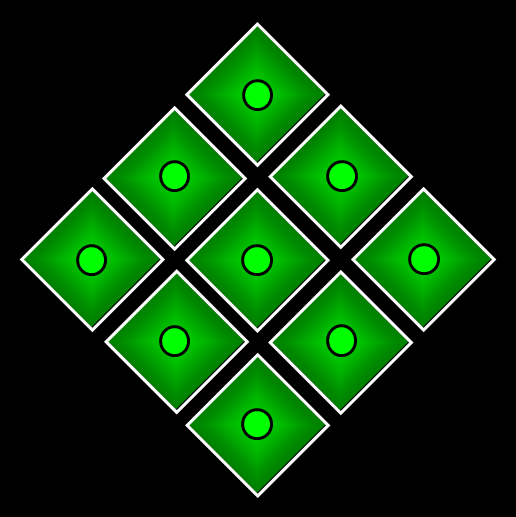 Physics can be a harsh taskmaster. It constantly forces image sensor designers to walk the line between high resolution (which requires smaller photosites for a given imager size) and high sensitivity, signal-to-noise ratio and exposure latitude (which all favor larger photosites). In small-format sensors, the challenges are especially severe. While Sony engineers must respect the laws of physics, creative designs can give us a little wiggle room. Sony’s ClearVid design rotates the conventional pixel array by 45 degrees and employs diamond-shaped photosites to address the specific challenges of small-format sensors.

While Moore’s Law enables smaller and smaller image sensors, there is no Moore’s Law for lenses. For example, achieving full 1080p resolution on a Super 35mm digital sensor requires a lens that resolves about 41 line pairs per mm. This is relatively easy. Move to the 2/3-inch type sensor common to television broadcast cameras and you’ll need a 100 line pairs per mm. That’s more challenging. Call it ironic, call it perverse, but the small, affordable 1/3-inch cameras need spectacular lens resolution-184 line pairs per mm-to achieve full 1080p. This performance is seldom achieved in the real world.

A second stumbling block in small sensors is inherent in the wave nature of light. Diffraction causes light to bend as it passes an edge, such as the blades of a camera’s iris. The diffraction becomes worse as the iris stops down and worse at longer wavelengths (the red end of the spectrum). What should appear on the image plane as a point becomes a blurry circle called the Airy Disk. Diffraction is much more likely to cause image blurring on a small sensor because the photosite squares are so much smaller in comparison to the Airy Disk size. 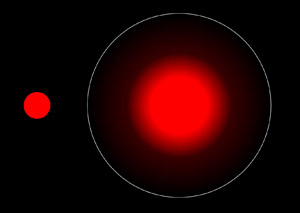 With diffraction, what should appear as a point of light (approximated at left) becomes a series of concentric rings like an archery target. Some 84% of the energy is concentrated in the bull’s eye, called the Airy Disk (right). (The white circle, not present in nature, indicates the Airy Disk diameter.) 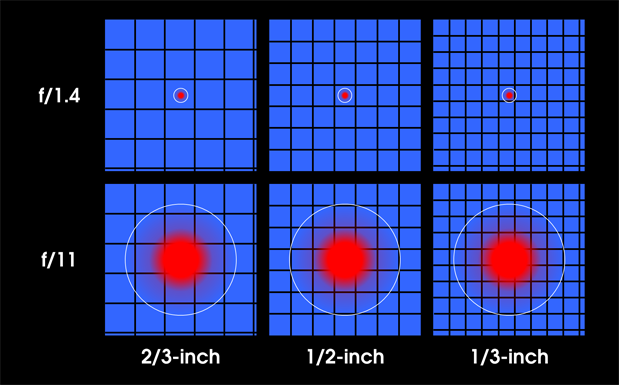 Airy Disk size versus photosite size for 1920 x1080 imagers. The effect of diffraction is more severe on the smaller photosites of the 1/3-inch sensor. Drawings after Sean T. McHugh, cambridgeincolour.com. 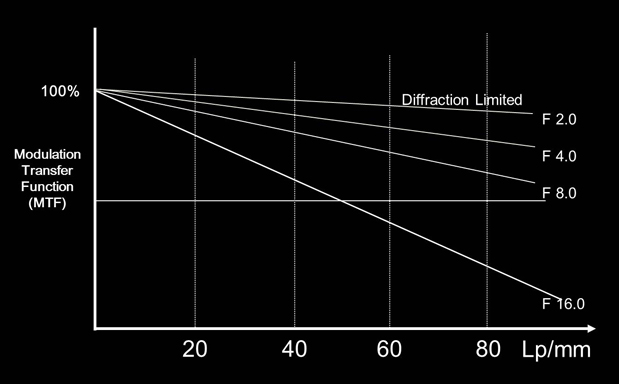 Here’s another view of how diffraction softens the image, in this case reducing contrast, as measured by MTF.

We’ve seen that the lenses on small-format camcorders struggle to achieve full 1080p resolution. Diffraction-induced blur sets in at many practical f-stops. What’s a camera designer to do? In some three-chip cameras, the designers opt for larger photosites and then try to recoup some resolution through pixel shifting and interpolation. This typically involves shifting the Green image sensor one-half pixel relative to the Red and Blue sensors and then using data from the three sensors to calculate additional values. This approach works well in standard definition cameras where the number of horizontal photosites already exceeds the number of digital samples per line. In high definition, it also works well enough for black and white images, where Red, Green and Blue are present in equal amounts. But it begins to fall down on color objects, where R, G and B are not in balance. A worst-case scenario would be an all-red sweater, where Green and Blue are entirely absent. The further the image gets from black-and-white, the worse the resolution will be.

Relative to a conventional 1920 x 1080 1/3-inch array, the ClearVid photosites are twice as large (and half as many). This makes for higher sensitivity, higher signal-to-noise ratio and wider exposure latitude (in the context of these small sensors).

With half the photosites of a conventional sensor, the camera interpolates the missing pixels by analyzing the four adjacent photosites. Doing this well requires a sophisticated algorithm, which Sony has subjected to extensive testing and tweaking. It also requires substantial number crunching. That’s why the ClearVid sensor works in concert with Sony’s Enhanced Imaging Processor. The result is a full HD output signal that comes respectably close to cameras with 1/2-inch or even 2/3-inch native 1920 x 1080 sensors, but at a substantial savings in size, weight and cost. 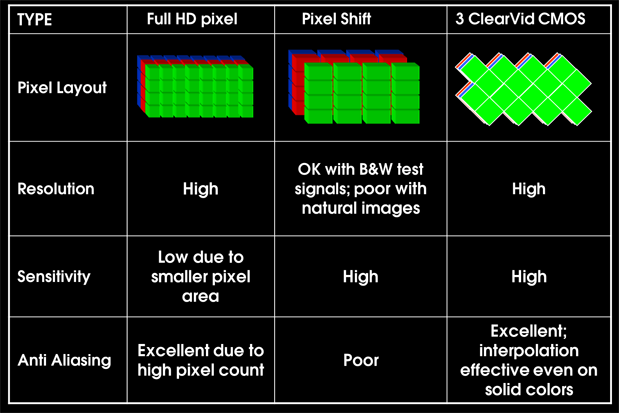 A summary of small-sensor design approaches.