Brian Hallett
Comment
The Blackmagic URSA Mini 4.6K was used to shoot the music video for Aaron Carter’s new single “Fool’s Gold.” My thoughts? Does it have to be a Aaron Carter music video? Just kidding. I love seeing Blackmagic cameras adopted for a shoot when less than a year ago a more expensive camera system may have been used instead. This is a great example of how Blackmagic has challenged the camera market. They love to put cinematic tools in shooters hands without costing customers an arm an a leg. In many ways Blackmagic could be responsible for driving the market in the direction they want, which I think is good news for us.

The video was Co-directed by Aaron Carter and Jon Asher, a platinum-selling songwriter and visual creative. Apparently, one of the main reasons the duo went with the 4.6K URSA Mini was for it’s clean and cinematic look. “Early on in preproduction, we decided that the video needed a really cinematic look to compliment the striking imagery. Using whites and blacks against pops of gold really enhanced the gold theme of the song, and we needed a camera that could capture it all and deliver a vivid look,” said Asher.
15 stops of dynamic range and filmic color science found in the 4.6K sensor help to deliver on Carter and Asher’s vision. The duo also made use of in-camera frame guides to shoot in 2.40 aspect ratio to help push the cinematic look further. Like many music videos, Carter and Asher shot much of the performance at half speed, or 48fps, while the track played back at twice the speed. In post, since the camera project speed was 23.98, the duo could immediately see the slow motion effect.

Colorist Rober Crosby processed the raw DNG files off the 4.6K URSA Mini within DaVinci Resolve. “The URSA Mini 4.6K has an organic feel that so many cameras are striving to achieve, and with the 15 stops of latitude, it made the grade quicker and more efficient,” said Colorist Robert Crosby. “We didn’t have to worry so much about things blowing out when pushing the white backdrops, and we still saw a lot of detail in the black body paint in front of the black backdrops. You instantly notice that there is so much room to work with.” When creating a more desaturated look in the bedroom scene, Crosby still wanted the gold on the sheets to pop, so he used the qualifier on the gold sheets to boost saturation. Then he desaturated everything outside of the gold using Resolve’s Hue vs. Saturation Curves tab. “I also really love Resolve’s 3D tracker,” added Crosby. “We used tracking on the bedroom shots just to brighten Aaron’s face a bit. And now with the 3D aspect of the tracker, it looks like the light is following him, instead of just a circle that moves in the general vicinity”
Support ProVideo Coalition
Shop with 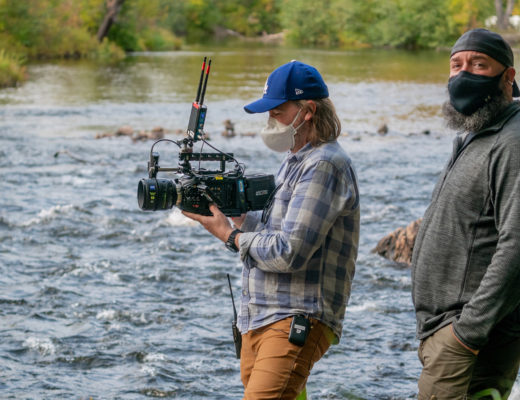