It might be a good time to invest in some glass

Are we right in the middle of a cinema lens revolution? I am talking about cinema lenses priced for the owner/operator as well as lenses the local camera house might carry for rental. It appears lens manufacturers want no barriers for you to invest in one of their lenses. We are seeing many lenses feature interchangeable mounts: EF, PL,  Nikon F, Sony E, and MFT. Plus, there has been a portion of the lens market which had been, up until now, mostly passed over by lens makers. Lenses priced around the $10,000 mark or less. Literal proof for my last statement can be found in the website brochure for Angenieux’s new type EZ Series reading this about the lenses “created to fill the  wide gap between basic still photography zooms and the highly acclaimed Optimo, Optimo Style family of lenses…” Proof Angenieux and many others want their lenses to be a DOPs next step after their DSLR zoom. To make your life easy I am gathering up all of the cinema lens announcements made recently and placing them here, for your convenience. Let’s dive in with Angenieux first. 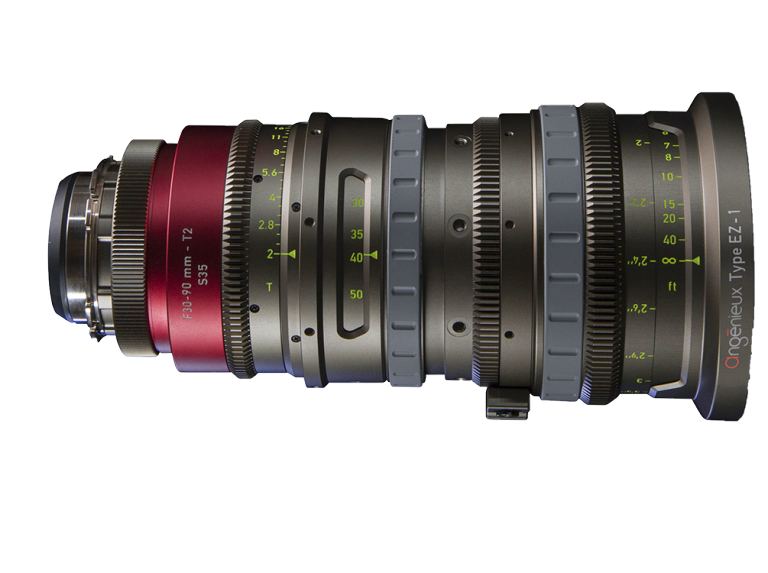 Here we have two Super 35mm zoom lenses each with two zoom ranges and apertures. Confusing? I’ll explain, but first off these lenses can change their mounts from EF, PL to Sony E. This is not the only thing these lenses can change. Angenieux has designed these lenses so they have interchangeable rear optics. This allows both lenses to change out the super 35mm rear lens group in exchange for a Full Frame / VistaVision rear lens group. A brilliant idea by Angenieux. Essentially, they have placed a speed booster, designed specifically to match their zooms, into the rear optical group for the S35mm version of each lens.

Angenieux wants you to not only be able to change the lens mount but also their field of view. The stated price for the EZ Super 35mm 30-90mm falls around $10,000 or $11,000 and with the Full-frame rear optical group the lens will be priced around $13,000. These numbers have not been fully confirmed by me just yet. If these prices change I will quickly change the details in this article . 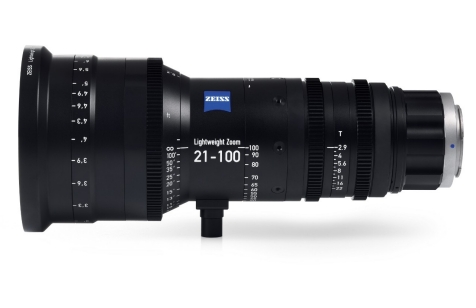 Here we have Zeiss’s step into the sub $10,000 lens game with their Lightweight Zoom 21-100mm T2.9/3.9. The lens is currently priced at $9,900 and will weigh 4.4 lbs. This is a helluva useful zoom range but what this lens lacks is a constant aperture. The lack of a constant aperture throughout the entire zoom range seems to be the large compromise Zeiss had to make to keep the cost and weight of the 21-100mm down. If the case, I cannot fault them. Hell, Canon 24-105 F4 shooters essentially have a near full stop of light loss when shooting at 105mm.

Zeiss designed this lens specifically for S35mm sized sensors so if you are a full-frame or VistaVision shooter this is not the lens for you. Zeiss already has full-frame compact zooms. One of the bigger selling points for me is the claim this lens will have near zero shift in focus while zooming in and out. Otherwise known as parfocal this is something I would expect from a lens like this one. I’d expect documentary style shooters to be picking this lens up in mass. The price is right and the zoom range is near perfect. 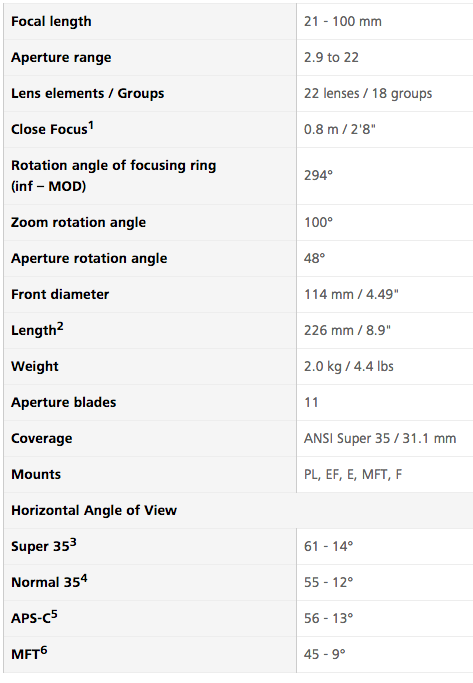 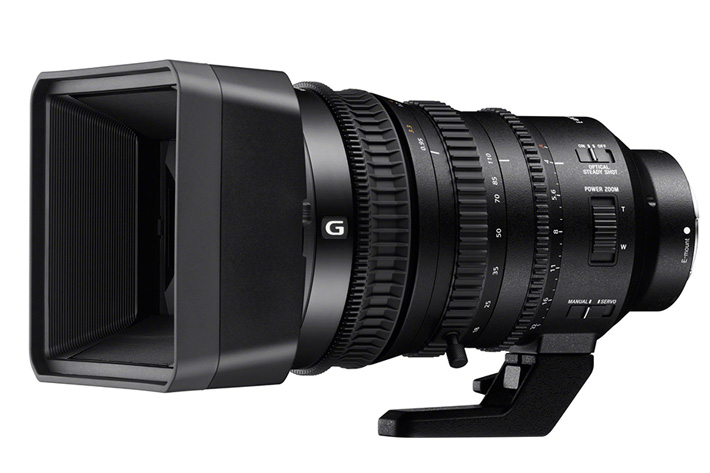 Finally. I mean finally! Sony releases a power zoom meant to work well on their Super 35mm sized sensor cameras. This lens is less expensive than the first two lenses listed in this article. It also has a similar range as the Zeiss and costs a lot less. Priced at $3,500 the 18-110mm seems to have sparked an outcry from Sony shooters who expected this lens to cost around the $2,400 the Sony 28-135mm F/4 G OOS lens costs. What can I say, wider lenses can cost more to make, and this lens is cheaper than the Zeiss 21-100mm.

Sony also already has the 18-105mm F/4, which is a great lens for many situations. The big drawback to the photo zoom style 18-105 was trying to focus it while on the move. I always felt like the lens had a razor thin in focus/out of focus feeling to the focus ring. I did love it on a Sony FS5 set to autofocus, though. For cinema work, this lens was a bit of compromise.

Because of these compromises, Sony came out with the Sony 18-110mm F/4 G OOS which not only has a functioning rocker zoom in the lens but also a .08 pitch gear on the focus wheel. Sony is only trying to solve problems for you. 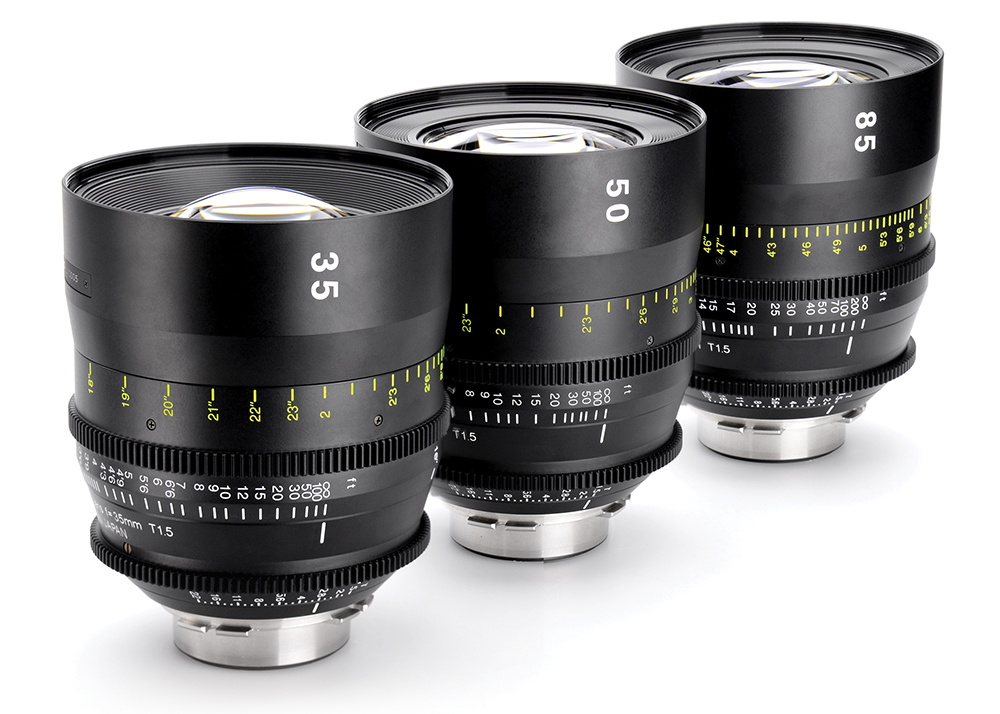 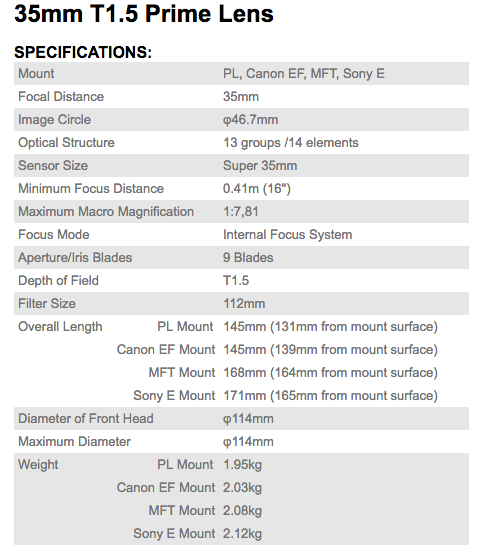 In wholly unexpected move Tokina announced three new prime cinema lenses, 35mm, 50mm, and 85mm all with T1.5 apertures, and an update to their 16-28mm T3 cinema zoom at IBC 2016. I love my Tokina 11-16mm even if it is getting a little long in the tooth. It is still one of the sharpest lenses I own. I can only image how sharp these cinema primes are going to end up. These lenses are an all metal design, cover full-frame sized sensors, and are not rehoused DSLR lens. Instead, Tokina built these lenses specifically for cinema use. Like all good cinema primes, these three lenses have matching iris and focus rings positions and identical front diameters of 114mm. The big plus with these three lenses, 35mm, 50mm, and 85mm, is there is zero focus breathing. Absolutely zero change shift. Then there is the T1.5 aperture.

It has been brought to my attention the Tokina Cinema primes do have interchangeable lens mounts, which I think is absolutely cool. These lenses range in price from $4499 to $4999. 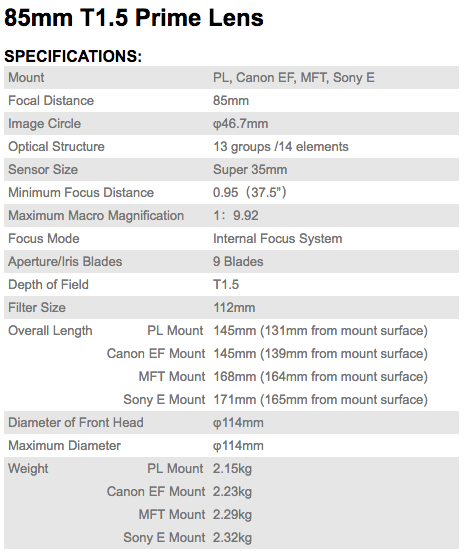 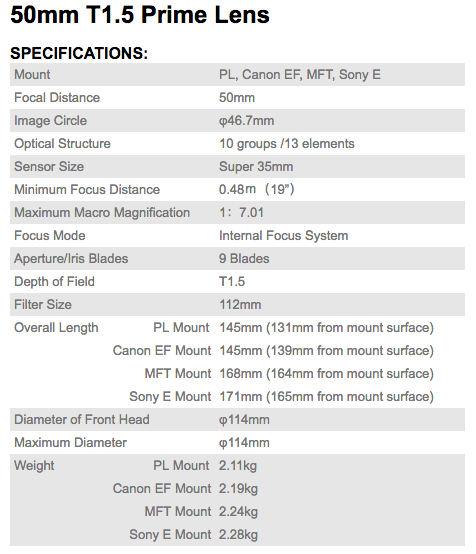 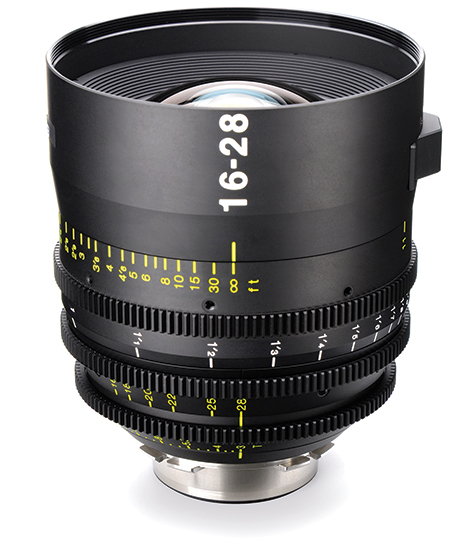 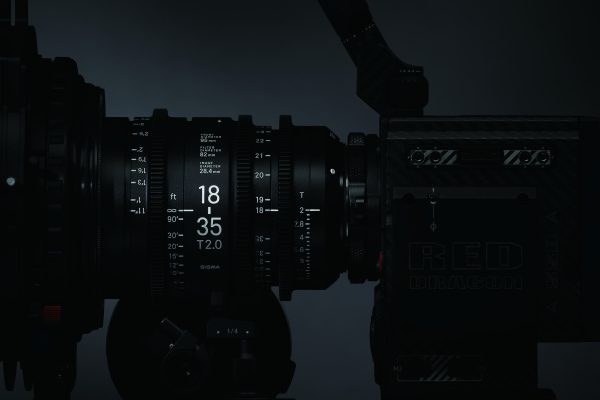 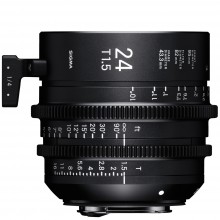 There is a lot of excitement surrounding Sigma’s first foray into cinema lenses, and why not, they make some of the fastest DSLR zoom lenses on the market. Sigma is touting a 100 & 100 press campaign for these lenses. It means 100% retained and 100% new. They are keeping their already proven glass as the 100% they are retaining. The 100% new in Sigma’s cine lenses is the entirely updated mechanics with a longer focus throw equal to 160 degrees with 0.8 pitched gears for follow focus and FIZ control. They have even gone so far as to add a dust and water resistant seal to each ring. So we will have Sigma’s already proven glass and a wholly new mechanical design.

The lens will begin shipping in November with the EF and E-mount versions of the 18-35mm T2 and 50-100mm T2 zooms shipping first. Then the rest of the lenses will be released in 2017. 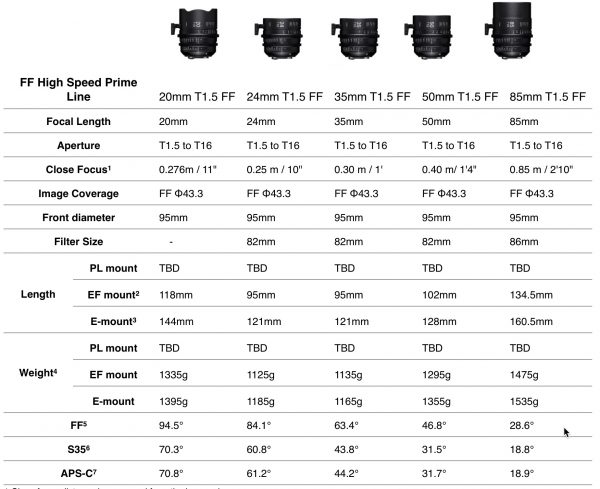 Leica and sister company CW Sonderoptic collaborated to bring the iconic look and character of Leica’s M glass into the world of cinema. The new 0.8 lenses will keep the classic Leica look and feature a de-clicked iris and pitch gear rings for both the focus and iris. These lenses were not built by just anyone. Leica made sure to retain the Leica characteristics by building, assembling, and calibrating all of the 0.8 lenses on Leica’s M line in Wetzlar.

Theses lenses will keep the Leica M mount. This will allow Red shooters and Sony shooters to take advantage of the new de-clicked Leica lenses. Sony shooters will need an adapter to fit the lenses to its FZ or E mounts. Red shooters will need an OLPF, available from CW Sonderoptic, for the Leica M 0.8 lenses. The lenses will start delivering in 2017. Prices range from $5900 for the 35mm to $13,500 for the 50mm F/0.95 Noctilux. 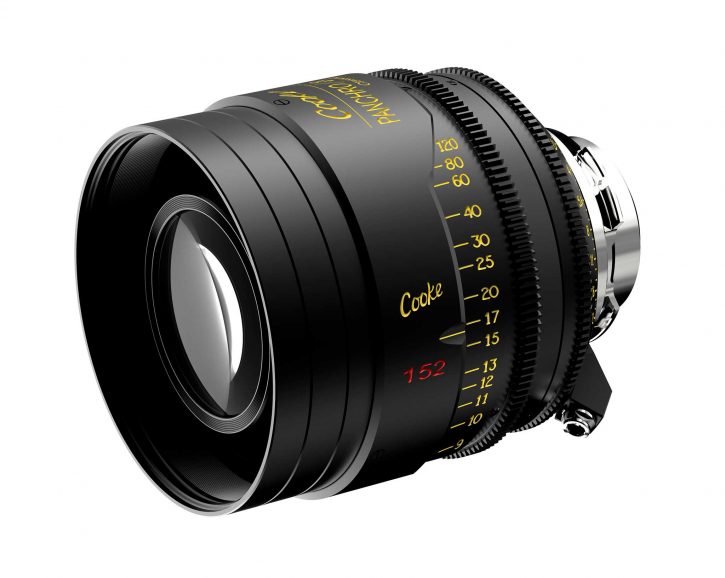 It seems to me it is rare bring back a type of lens made decades ago, but this is exactly what Cooke is doing. I cannot blame them either. After many cinematographers have been finding and rehousing older Cooke Speed Panchros the lens maker decided to go ahead and bring those lenses back to the market. I get it. I have a buddy who has a set of rehoused Cooke Speed Panchros and those lenses are delicious. So much character. Cooke will use the original design of the Speed Panchros but update the mechanics with PL mounts for modern cameras. Remember, Cooke announced recently their lenses will have adaptable lens mounts. This might open up these new / old Panchros to EF mount, E mount, or even Nikon G Mount. We’ll have to wait to see. 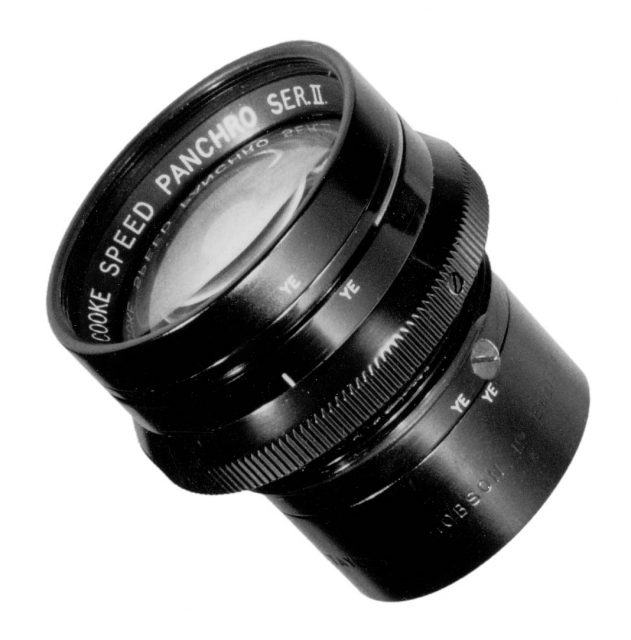 Horace W. Lee designed the original Cooke Speed Panchro lenses in the 1920s. These lenses were developed for filming without the brighter Arc Lights used prior to “talkies.” So the vintage lenses had apertures as wide as F2.0. The wide aperture and definition previously unheard of helped these lenses gain a worldwide reputation. Hell, we’re still using them today. The list of modern film and television shooting on vintage Cooke Speed Panchros is impressive. Here is just a small sample: Carol, To Rome With Love, Whiplash, Mr. Turner, Rush, and The Witch. That’s only naming a few too.

I wonder what the cost for the new/old lens will be? It appears Cooke will be manufacturing these lenses from their original plans. So, I’m guessing they will not be rehousing older lenses. We should think about this like we would if Cooke was cooking with its Great Grandpa’s recipe book. Expect to see these lenses ship around NAB 2017. The rest of use will be slowly collecting vintage Cooke Speed Panchros to be rehoused by companies like P+S Technik.

It has been an incredible couple weeks worth of Cinema Lens announcements. Some of these lenses are within many peoples’ budgets and many, well, are more like lens porn. I’m talking to you Cooke and Leica. I can easily see many documentary shooters picking up the Zeiss LWS.3 21-100 as soon as it comes out. This lens feels like it was intentionally made for Sony F5 and FS7 shooters. The two Angenieux EZ zooms look to be an Indie feature filmmakers, and commercial DOP, lenses. The Sony 18-110 was built for the FS7 and FS5. There is no doubt in my mind here. I bet I see the Sony 18-110 in Nashville pretty quickly. The Tokina and Sigma lenses appear to be ripe to change the state of low-cost cinema lenses for different reasons. We will definitely see a lot of Sigma Cine lenses if they keep the price competitive. Those Leicas and Cookes? Those will have to stay in my dreams for now. One day.