Have ever-bigger sensors made life harder for lens designers and documentary crews? 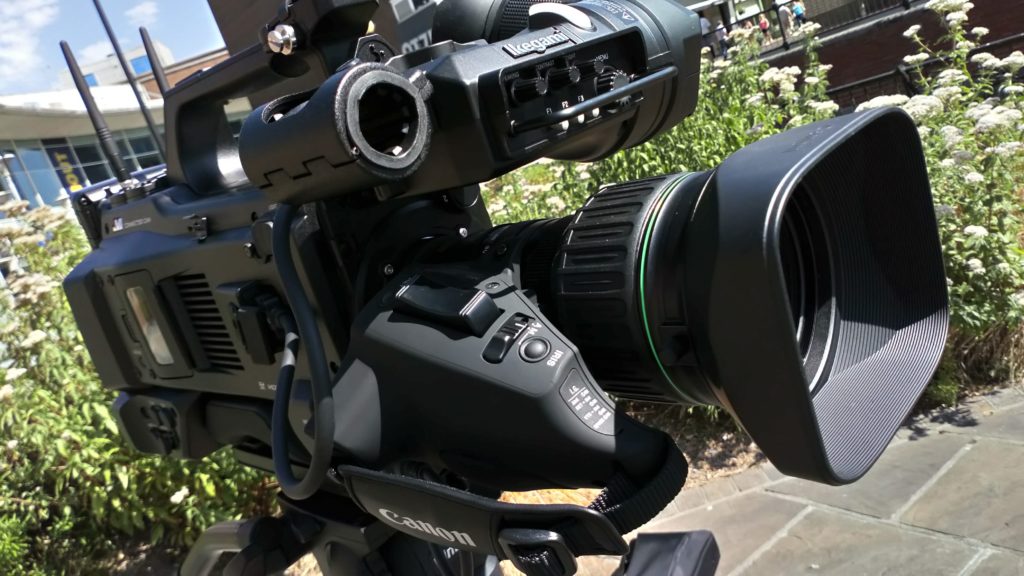 It’s hard to object to the way moving picture production has drifted away from small-sensor, three-chip cameras toward single, larger sensors. The benefits are clear: the cameras are smaller and cheaper and lens design is simplified. Or at least, it is if you’re making cinema primes; that assumption breaks down when people who grew up on 2/3” broadcast zooms – people such as your narrator – try to achieve something like the same ergonomics and usability on a modern, single-chip camera.

The problem is, there is nothing like a seventeen- or eighteen-to-one broadcast lens for super-35mm sensors. For instance, a Fujinon ZA17x7.6 is a 7.6 to 129mm zoom in a package the size of only a medium-sized stills lens that maintains at least f/2.3 end to end. Like it or not, there is nothing that will do that for any amount of money in super-35. 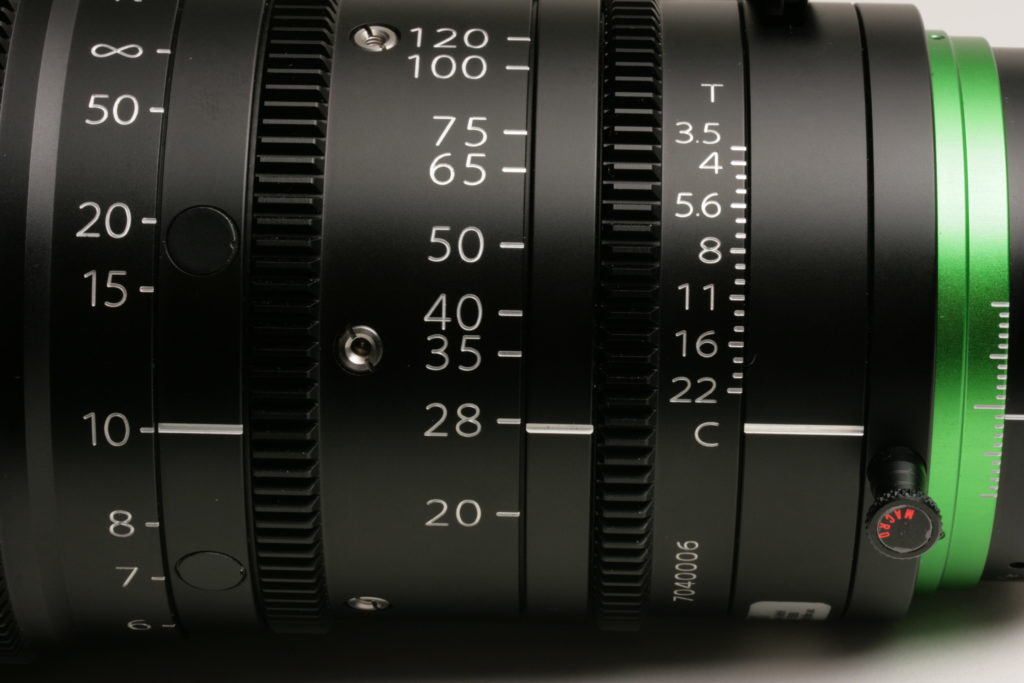 Fujifilm’s XK20-120mm is a wonderful lens, though it weighs twice as much, costs a lot more and has about a third the zoom range (it is slightly faster assuming the B4 lens is adapted to cover super-35 sensors). Again, though, the 20-120 is fantastic. Lenses like it, or the longer but spendier Canon CN7x17, or the slightly slower but compact Zeiss LWZ.3, are lovely and beautiful and a large part of why modern documentaries can and do look so good. Still, the move to bigger chips has undeniably affected the ratio of size, weight, cost and capability in highly portable zoom lenses, especially on lightweight cameras that may struggle to balance the higher-end options.

What provoked this line of thought was a cautiously sotto-voce comment from one of the better-known incumbents of lens rehousing. There is, we’re told, a tendency for the less well-funded filmmaker to want a stills zoom rehoused in hopes that the result will be something the price, size, and weight of a Canon EF 28-300mm f/3.5-5.6L, but parfocal and with more focus travel.

Sadly, anyone instinctively frowning at that idea is right to be cautious.

This sort of thing can certainly be done, and has been, but the purpose of rehousing done well is not to save money, it’s usability, ergonomics and sturdiness. It’s usually more expensive, perhaps much more expensive, than buying a similarly-specified cine lens to begin with. Unmodified stills zooms are widely used for moving image work, but it’s hardly controversial to point out the limited focus travel and general layout make them far less handy than lenses specifically built to make moving images. 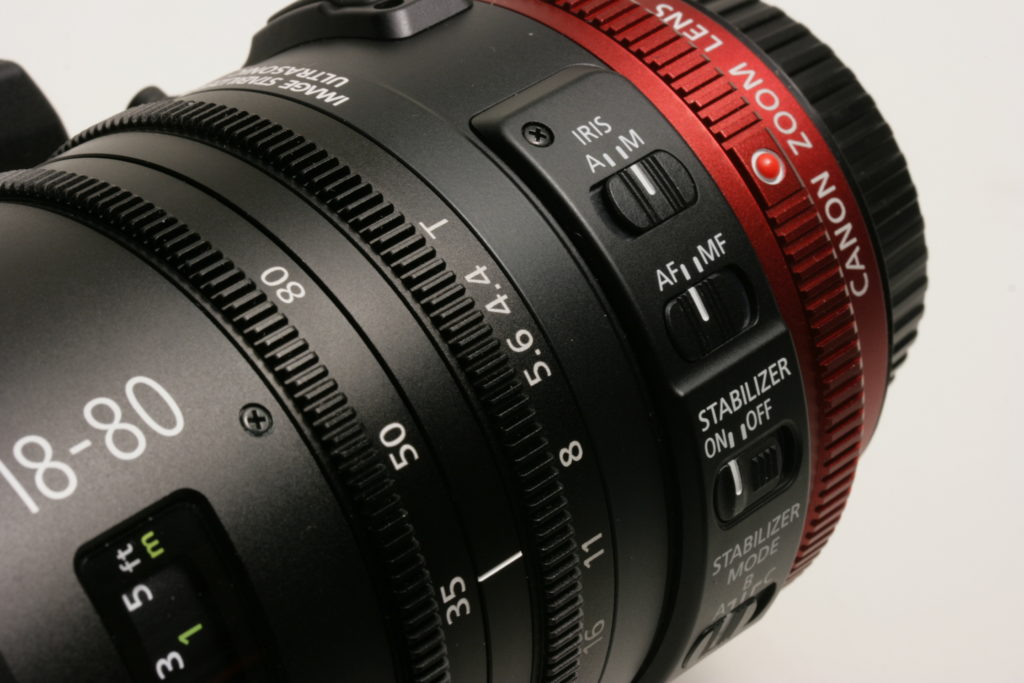 Clearly aware of all this, Canon built the 18-80 T4.4. It is an effective, and at under $5000 with grip, an affordable option. It could be longer and faster, but if we want a proper native big-chip zoom, there’s very little to compete with it. If we’re willing to go with a pair of zooms, which is something many documentarians would rather avoid, and if we’re using a camera with a very shallow lens mount, we can get a lot more performance; consider Fujifilm’s MK zoom pair. Sony has its series of somewhat-manual E mount zooms, including a useful 28-135 f/4, although they rely on E mount cameras.

Another compromise is represented by taking one of those enticingly lightweight and cost-effective broadcast zooms and putting an adaptor on the back which will correct-out the fact that the lens is designed for a 2/3”, three-chip camera. This approach is sometimes criticized as compromising speed and optical quality, although that sort of thinking often arises from people who shoot 4K at minimum aperture and maximum focal length, pixel-peep the corners on a monitor with 10:1 zoom, then complain it’s mushy.

With the extender in, that lens is operating at 258mm and an effective aperture around f/4 while keeping a 15mm wide end immediately available. That’s vastly beyond the capability of almost any stills zoom. Refrain from using the top quarter of the zoom range and the bottom f-stop, and the lens performs better while still remaining numerically competitive with other choices. News lenses are built to cover edge cases, and that sometimes just means that opinions about what’s an acceptable picture are predicated on slightly different intentions.

It’d be nice if one of the lens companies built a lens that worked like that out of the gate – a broadcast zoom like the Fujinon ZA17x7.6 or Canon HJ17x7.6B, just with the extender fixed in place, omitting the unnecessary provisions for three-chip cameras, and with the B4 to PL adaptor built in. Possibly we haven’t seen that because it would cannibalize the lower end of cinema zoom sales. Possibly we haven’t seen it because it can’t be done. Very likely, though, it would sell by the bucketload.

Exactly what’s possible is a product of optics, finance and ambition, but the opportunity is there if anyone can work out how.