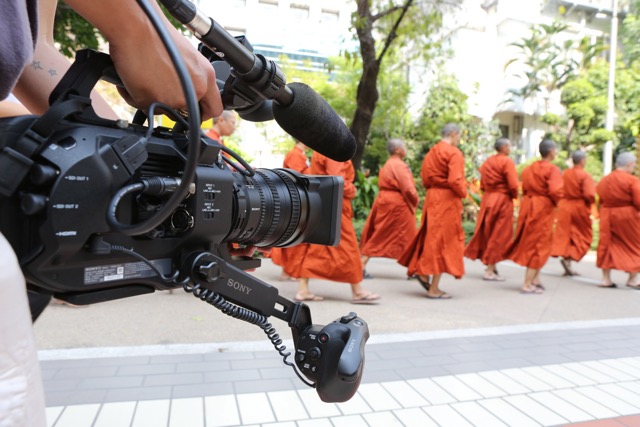 A 19-day shoot covering more than 35,000 miles requires a very special type of camera. For me that was the FS7 and its servo zoom E-Mount lens (FE PZ 28-135mm F4 G OSS – SELP28135G), which I put through their paces in some very challenging conditions. 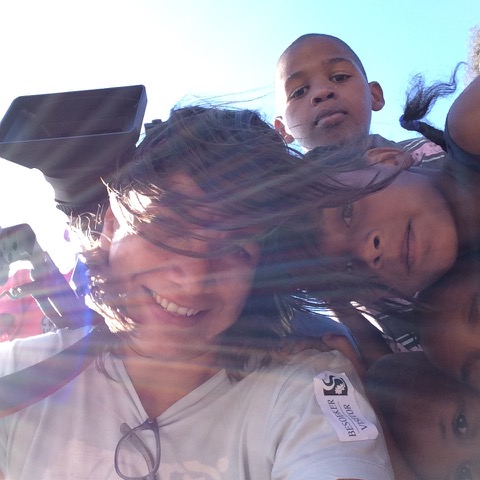 I was shooting a documentary on pediatric tuberculosis for TB Alliance, a not-for-profit product development partnership leading the search for new TB regimens. I brought the FS7 along with my Canon C300. Before the project started, the plan was to use the C300 as the main camera, with the FS7 coming out of the bag only for slo-mo shooting or specialized looks. By day three, I was shooting mostly with the FS7.

We were interviewing pediatric TB patients and the medical staff of clinics in little villages and townships across Cape Town, Bangkok, and Manila.  For each of our 19 shooting days, I was probably 85 to 90 percent handheld. The FS7 was in my hand for 10 hours a day, and I had a callus on my thumb to prove it!  It just fits your body so well. It’s more mobile, it moves with you. To me, it’s more of a handheld camera than the C300. 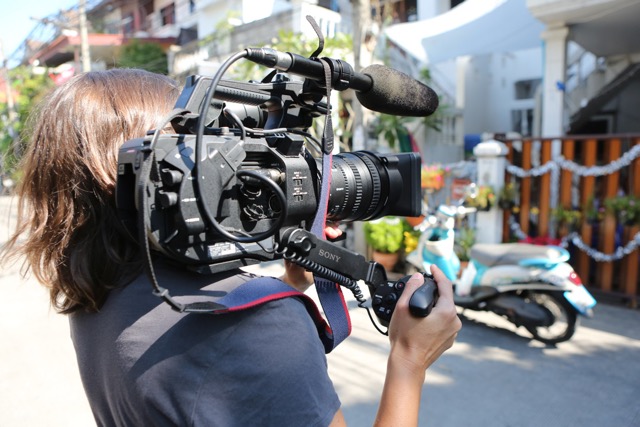 Two things kept the Sony in my hand all day, helping us stay unobtrusive and still get our shots.

One is the ergonomics. I tend to shoot underslung and up on my shoulder, so it just fit better. The handling of the camera is smoother and allows you to be run-and-gun. You can run down a dirt road with a bunch of kids and the camera moves better. The other is the 28-135 mm servo zoom lens. That lens is SO sweet.

The camera gravitated to my shoulder during this shoot more often than I would ever imagine.  Beautiful handheld work comes from being able to quickly set f-stop, fps, and focus, as well as intuitively navigate a scene to create fluid camera movement.

We shot interviews with patients, doctors, healthcare workers, and parents.  There were a lot of sit-down interviews in their homes and in the clinics – nothing super-formal.  There was no studio.  I was shooting “a day in the life,” showing how hard it is to keep a child on the tuberculosis drug regimens. There are medicines with a lot of side effects, and these kids usually have to go to the clinic every day to get their medicines. It’s a real trek. We wanted to show what their lives were really like.

We also wanted to be a fly on the wall.  I was sometimes shooting in homes that housed four people and were maybe five feet wide from wall-to-wall; about 50 square feet for the whole house.  Being able to tuck into little corners with the FS7 was amazing.  In two clicks I could switch over to 1920×1080 and do slow-motion.  I was able to create a look to the piece very quickly. 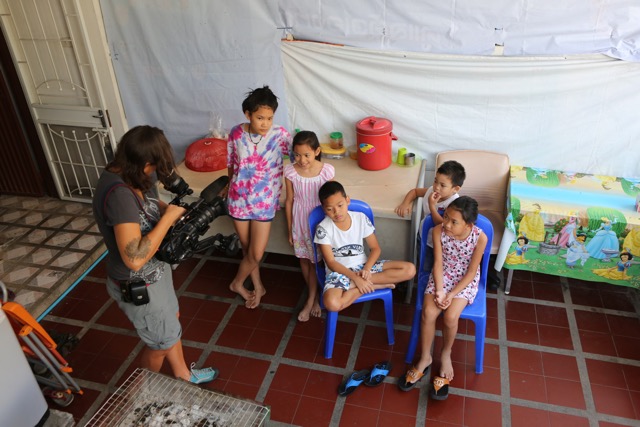 Everything you need on this camera is at your fingertips, which is fantastic. When you are shooting a documentary there is no script of course, so anything can come at you at any given moment. You have to change and adapt really fast.

I have to admit, at the beginning, the depth of the Sony menu was intimidating. I thought, “Oh my God, I don’t want to think about all this. I don’t want so many options.” But once you get to know it and push your favorite adjustments up into the user page, then BOOM, you have those choices at your fingertips, and I used them all.

This camera and lens really came through for us in so many big ways that it’s hard to single out one moment. Overall it really fit our shooting needs on the fly, quickly, and easily. 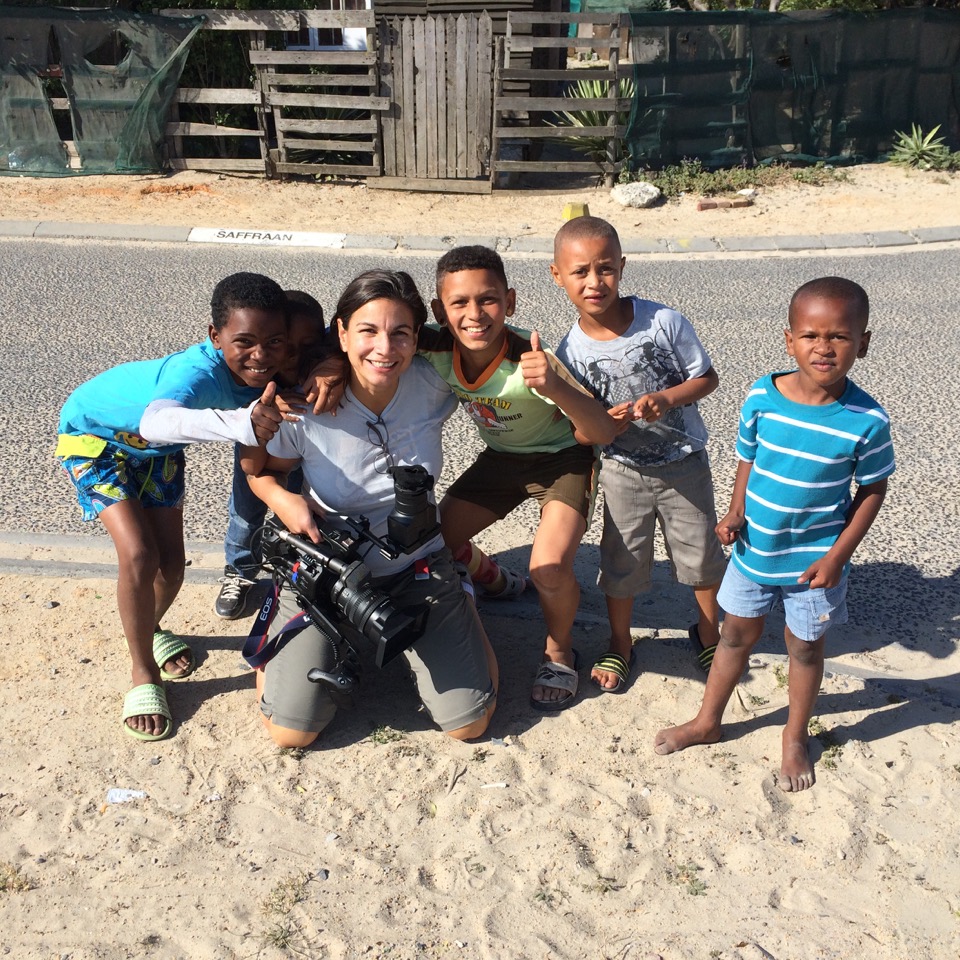 We were shooting all day, every day in different settings, lighting environments and elements. In one day I would go from shooting outdoors on the street to shooting in a marketplace to being inside a hospital with fluorescent lighting, then back onto the street and into someone’s home.  This one camera and lens held strong in all of those situations. That’s really important because, at that point, you’re shooting 10, 12, 14 hours a day. It’s exhausting, and the crew was just me and the director.

Having just the one lens and one camera made a very effective, small package to carry around. Personally, I don’t use the zoom movement of a zoom. I use it as a giant prime lens, and I bounce between six focal lengths. To be able to go from 28 to 135 all in one lens is a huge advantage. With most of my DP friends, often the big question around the Sony glass is that F4, and I’ll admit it was my first question too: “F4 – that is so slow, why can’t they just do a 2.8?” But I didn’t feel it. This F4 looks quite shallow and is really beautiful.  I didn’t find myself longing for 2.8. F4 is the new 2.8.

The tradeoff is the weight and its motion. That lens is so light. It’s beautiful, and to have that zoom control on the FS7 when you’re basically a one-person crew means a lot.

We were shooting 3840×2160 UHD and I didn’t have the external recorder, just the Sony XQD cards. They had to handle a lot of information and in retrospect I would have brought many more cards. The beauty of the new G cards is the transfer speed. They were fast; I mean 400mb/s is crazy fast.  Nobody has 400mb/s download. It’s just one more “wow” when it comes to the FS7.

If I were pressed to choose one thing about the camera I liked most, it would have to be the dynamic range. The combination of dynamic range and 3840×2160 resolution was just gorgeous. Every night when I downloaded the footage I would marvel at the range and the beauty of these images.  It’s a beautiful codec.  Everything about it is stunning, particularly the shadow detail and low/no noise. 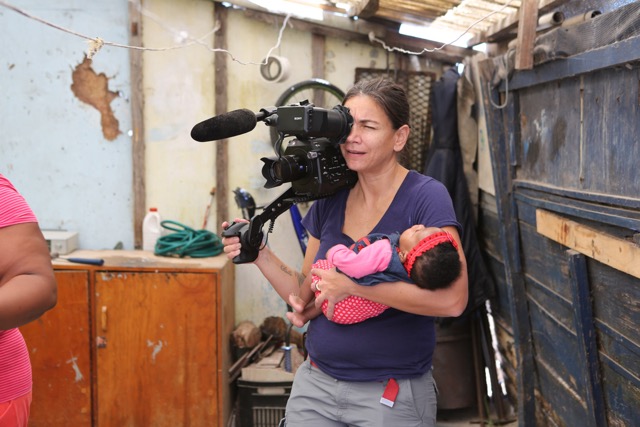 There is one moment that stands out. I was shooting a kid in South Africa and he was holding his baby sister, who was three weeks old, and another baby who was a month and a half. I saw one of the babies was slipping, slipping, slipping, slipping, and the parent in me came out. I said, “Hey, you’re going to drop the baby. Let me help you.” I held the baby and I kept shooting: FS7 in one hand, a baby in the other.  She was content and I was content, so I just kept shooting that way for a while. You can hold a baby and shoot with this camera. I’ll bet that’s one thing the design team never thought of!

But it always comes down to the shots you’re able to get. A few times when I was shooting, it was dark out and the meter was saying “low light.” My first instinct was “don’t shoot, kick up the ISO” but I thought “forget it, I’m shooting anyway, at the base 2000.” It looked beautiful.  I was absolutely 4-5 stops under-exposed. I would bring it onto the computer, drop it into SpeedGrade and literally two little tweaks in, WOW. It held and it was gorgeous.  How it handles night is really stunning.  I love it!

For more information on Michelle McCabe’s work, visit www.nuncreative.com, and to learn more about the TB Alliance, visit http://www.tballiance.org. 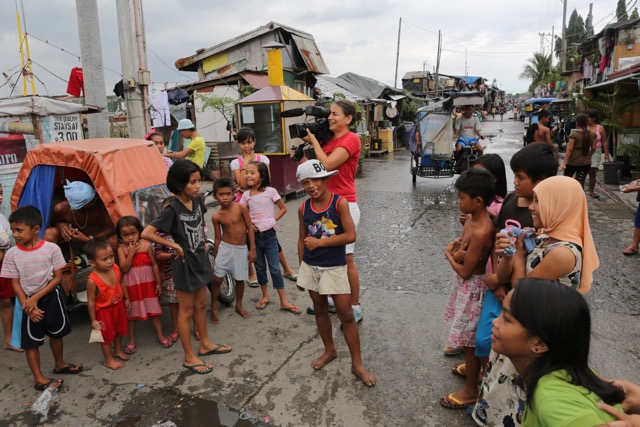