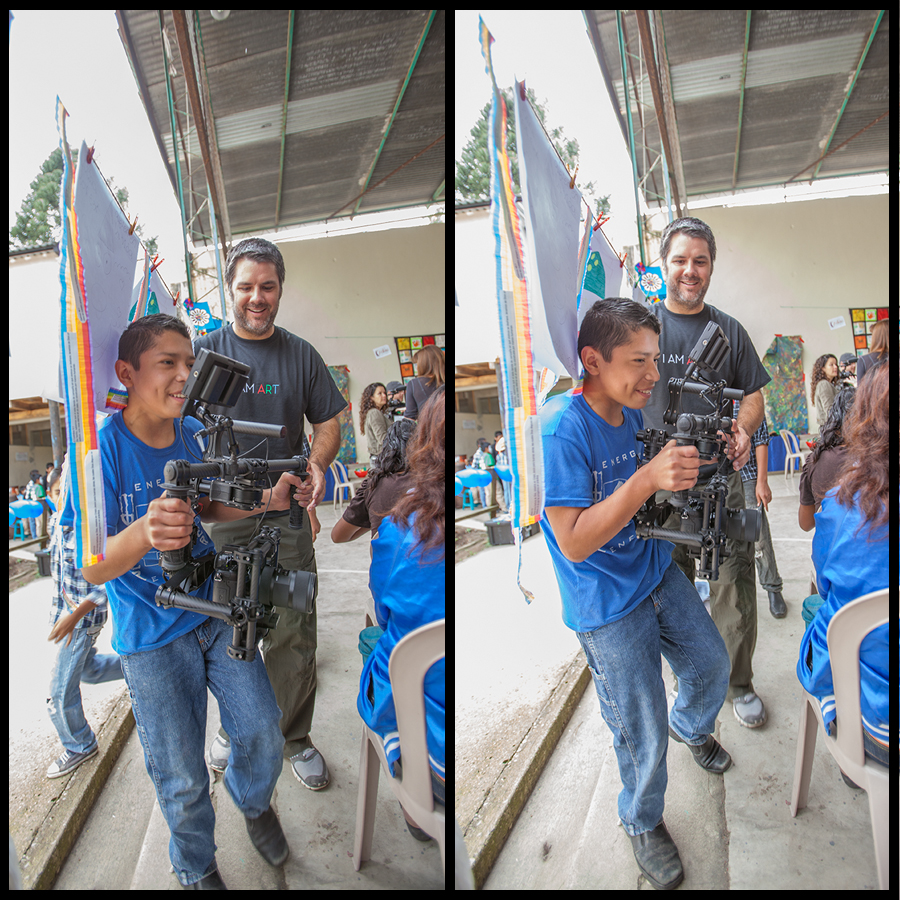 A Guatemalan boy using a MOVI for the first time, first time holding a camera as well!

Now, why documentary style? There are many ways prepping for a narrative project that will be in production internationally but there are some ways doing a documenatry style project can differ and that’s been primarily my experience. This is why I differenciate the two. But, if you are traveling internationally for a narrative project, by all means, these tips can also help.

Understand where you are going, who are the native people, what are their beliefs, traditions, norms, etc. This will help you understand what you can capture and what kind of access you will have. My experience in Guatemala has proved to me that there are two polar opposite cultures when it comes to that country. There is the Spanish, mixed culture, brought on my the colonization from Spain and Germany. Then there is the native Mayan culture that has been there since the pre-columbian era, and still is today. I understand when I am in the city and most urban small towns most people do not mind having the photo taken or video of them captured. However when I go into Mayan villages that is not always the case. In fact, most of the time it’s the opposite. It shows respect when we show up with cameras and ask for permission from the people in the village first. If they say no, we honor their wishes and do not take out the cameras.

Having an understanding of the two cultures allows me to adjust what I capture and how I capture my footage. I show respect for that culture and in turn I am respected for what I am there to do.

If you can, try to find someone in the country you will be traveling to who lives there and does video and film production. They will have insights on what logistics to think about when it comes to performing production in that country. They will know what to bring and what may not be needed. This not only goes for gear but also for clothing and items to deal with the elements such as rain covers and gear protection.

If you cannot find someone local, at least try to find someone who has experience shooting in that country. With resources such as LinkedIn Groups, Stage32, Twitter and so on, I’m sure it will not be difficult to find someone using those resources.

I’ve been to Europe a few times and to Guatemala 6 times and I can honestly say you do not need as much gear as you think when shooting a documentary internationally. It’s important that you think about the production and try to determine your essential needs. If you think you may only use a piece of gear once, leave it. Most likely you will not use it at all. I know it’s important to prepare for the unexpected but understand the unexpected will come and it’s almost impossible to prepare for it in you mind. Know what you are going to capture and stick with that.

In my case, I’ve learned I do not need any other monitor than my SmallHD DP4 – no need for a follow focus or a matte box (although for my BlackMagic Pocket, I may not be able to get around that!) – no primes other than my 85mm, my other two lenses are zooms – I only need one small light and my monopod is my best friend! I’ve learned more but you get the point. It may not be the same for you but it’s important to think things through, especially when you’re going to be somewhere where you are having to carry all of your gear!

Here’s a quick list to use to help you think things through:

That’s not everything but it will get you started. 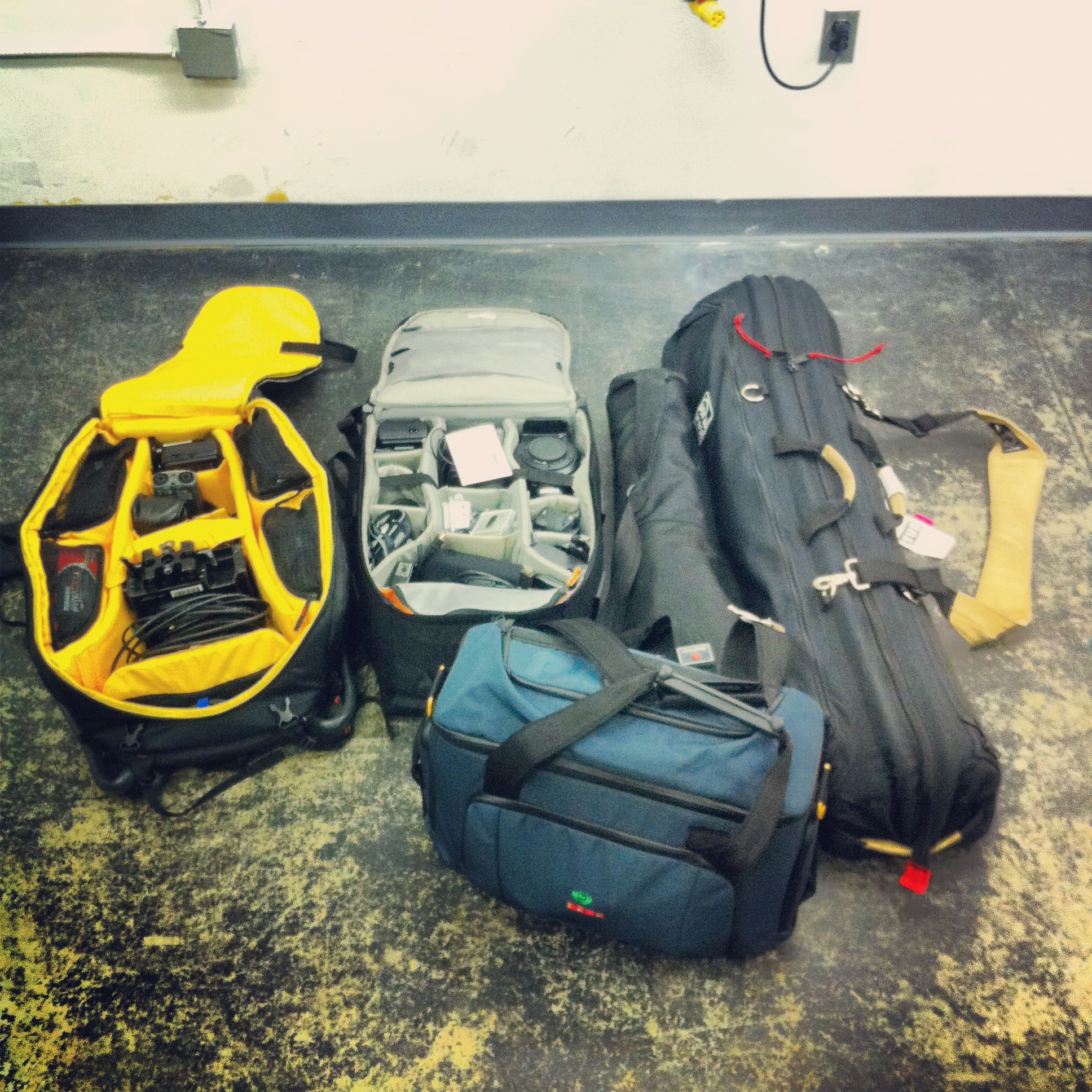 3 Camera setups, GoPros, Slider and motion control as well as support in just these bags!

4. Pack and then Re-Pack

As with choosing gear, packing is also very important. Thinking not just how to pack but what to use to pack your gear and clothing. I use a combination of suitcases and gear bags. Rarely do I take a Pelican or any hardshell case. Why? Because hard cases draw attention and signify there is something of high value in that case. It’s a target for being stolen. Sometimes I can’t get around it. Just like my last trip, I had to take my Pelican roller case which housed my DJI Phantom 2. But what I did was remove the UAV and most of it’s contents and packed that into a backpack and stuffed the pelican case full of accessories. That way of it was stolen, they would get nothing but a case full of accessories I could get replaced in country.

So, it’s important to know what you’re going to take and how to pack it. Know that how to travel with it does not have to be how the gear will be housed while in country. I often have my gear spread all over the place, partly for safety, other reasons are for weight restriction per bag while traveling. It’s almost an art form on it’s own and one that will not be mastered on the first attempt. But they better prepared you are, the more efficient you will be traveling to and from your destination.

Once you have laid out all you will need to pack, plan a few days out and try packing everything up just as you would if you were leaving that day. Make sure you can get everything into the bags and cases you’ve designated. Trust me, you will not get everything in the first attempt. But that’s why you plan ahead and practice, especially if this is your first international trip. After a few times you may have it down. But even for myself, I still practice this way and it has been a tip that I never pass up.

As with knowing the culture and the environment in which you will be capturing your footage, it’s equally important to know the climate and weather of the region in which you be. Is it warm or cold, wet or dry? Is the weather unpredictable or are forecasts reliable? These questions can be answered easily with someone who has been there or even better, lives there. But even if those are not possibilities, you’re not out of luck.

For all my clothing needs I’ve turned to places like REI, Backcountry and TravelCountry. I’ve found the clothing they carry not only protects me from the outside elements but it’s also very high quality clothing. Sure, it’s more expensive than running down to Walmart and getting a rain jacket but the clothing at these places are designed to be packed light, travel light and be the most efficient for being out in the elements. I now travel with usually just 4 days of clothing for two weeks. The clothing I take does not retain odor, is quick dry and can be packed into a small day pack so it takes up very little room. Of course that may not be the same for cold weather but even my Patagonia down jacket can be folded up into a pillow the size of my hand so there are options for packing light for cold weather.

Do your research and talk to the people at these stores, they can help you. Most of the time they are outdoor enthusiasts themselves so they understand your needs quite well. But having the proper clothing will allow you to be prepared and make the best of the time being in production in country. I’ve even found myself wearing many of the items when I’m home, wether it’s casual wear or even doing production at home. Some of the clothing is universal so it’s money well spent.

It’s a good idea to pack some basic medical supplies. I have allergies and they can come on strong at any given moment so I always take a good amount of Zyrtec D with me. If you have any medication that you take, even just on occasion, it’s a good idea to take some with you. Anti-diahrrea medicine is always a must as well as ibuprofen and fever reducing meds such as Tylenol or aspirin. These are just the basics, but always good to have on hand. Also some immune system building meds like Airborne are good. Start taking that a couple of days before you leave and on occasion during your time in country. If you’re sick, you can’t work – if you can’t work, your project suffers if not fail!

My last trip to Guatemala I got a stomach parasite and I was down for about 5 days. I was able to do some shooting but I could only muster up a couple of hours a day so I was not very effective. Now, it may be that none of the medications I mentioned earlier would have helped but again, the more prepared you are, they better shape you will be in.

7. Collaborate with Your Team 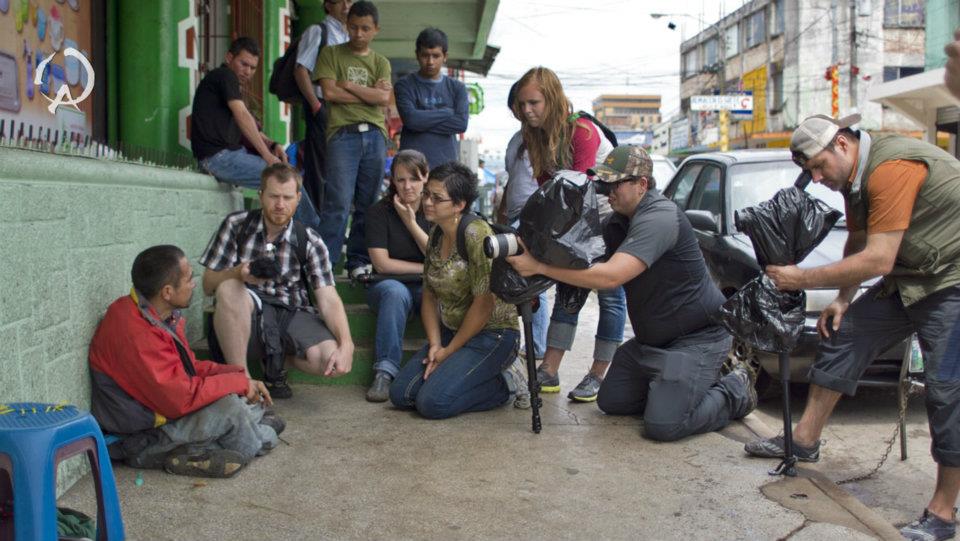 If you’re going with a team of people, even just one other person, it’s vital you collaborate with your team often before the trip. Talk about the project, the expectations and the roles of each person. The results of these discussions will play into what gear you take or leave behind. Talk about how much storage space you will need so you know how much storage to bring down with you (Don’t forget about redundancy, for every hard drive you bring down, bring a backup!). You can use apps such KataData to help you determine the file sizes for each camera you are taking and get an estimate of your storage needs.

It’s also good to communicate how much baggage you will have and what all you’re bringing down. There have been instances where I’ve been able to hand off a bag or two to other team members to avoid high baggage fees from the airlines and thus saving money for the trip. But only when you communicate with your team will you have that information and can prepare accordingly.

I hope these tips will help you out if you are tackling a project internationally. I know these are not all the things to think about so please, feel free to comment about the ways you’ve found helpful in preparing for an international documentary project.