An interview with Michael Kammes about his new web series 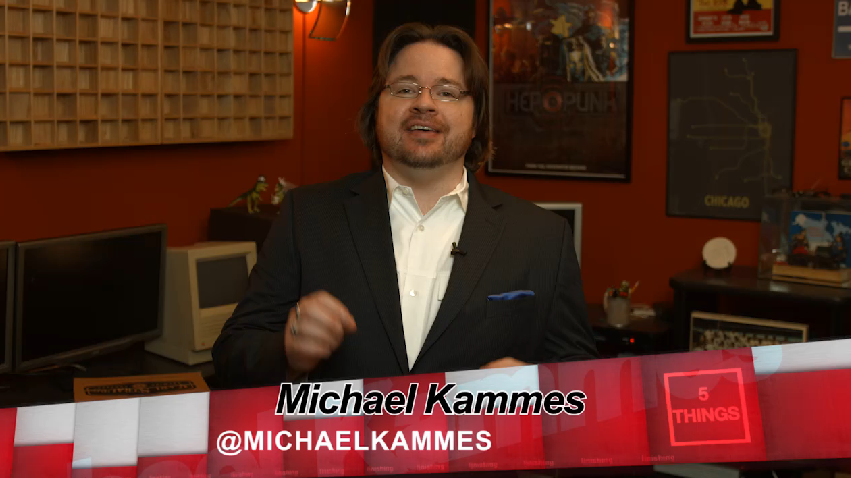 As the Director of Technology & Marketing at Key Code Media, Michael Kammes is well versed in the technical details surrounding acquisition, storage, editorial, audio, finishing, encoding and plenty more. He’s been involved in the design and build of hundreds of NLE systems and facilities, and consulted on even more.

Michael has the experience and expertise to explain just about anything and everything in the media creation space, and that’s the main reason he launched 5 Things, which is a web series where he talks through 5 relevant tech questions. The series is an independent venture for him though, and doesn't have anything to do with his employer or the companies whose products and technologies he discusses. The series is solely his opinion, but it's an opinion that's both insightful and informative.

Episodes on 4K and Adobe Anywhere are already available, while codecs and storage will be discussed in future installments. New episodes come out every other Tuesday, so you'll have two weeks between each episode.

In light of this new venture, we wanted to ask him 5 things to find out what’s coming up for him in the series, what disruptive technologies he's come across and where things are headed for the industry.

You’ve recently launched 5 Things which is an independent web series dedicated to answering 5 burning tech questions people have about technologies and workflows. What inspired you to create the series?

As much as I love focusing on 0's and 1, speeds and feeds, and all things tech, my roots are in the creative space.  A tech webseries seemed like a way to bridge these two worlds.  The concept of injecting media I dig from pop culture as a way to tell the tech story from a personal place convinced me I could bring something unique to the space.

It's also a way to discuss and share technology and it's usage as a singular voice, with a 100% focus on education and community.

What are some of the biggest challenges you’ve come across or heard about from other professionals? Are you looking to address any of those challenges in an upcoming 5 Things installment?

Without a doubt, the biggest challenge has been a non-technical one.  The commoditization of technology used to create media has fueled the notion that you can pay talent less because the widgets are cheap.  That's simply not the case, you're paying for the talent and experience, not the shiny object they work with. The non techness of this massive issue makes an episode of 5 THINGS unlikely.

On the tech side, the challenges are mainly rooted in the promise of new technology NOT being more complicated.  This is a fallacy.  Across the board, from acquisition through distribution, there are more players, more technologies, and a massive amount of workflows that change avery few months.  There is a huge amount of white noise.

Finding the right way WHICH technology can work for YOUR project is the big question.  What do I choose?  Why use this workflow over another?  The Who, What, Where, When, and Why.  That's where 5 THINGS come from.  I've already released Episodes on Adobe Anywhere, and the topic of 4K.  In the coming weeks and months I'll be discussing Nexidia and phonetic recognition, the always confusing topic of CODECs, and a 3 part series on choosing the right storage.  I'm also planning episodes on Live Streaming, as well as LTO.  I'm hoping that as 5 THINGS picks up speed, my viewers will tell me what they want to know 5 THINGS about.  I don't want the series to be in a vacuum.

What’s the most disruptive technology that you’ve encountered? Did you see the industry as a whole struggle with or embrace that disruption?

Automation, hands down.  Many of the more mundane tasks involved in media creation and distribution: file management, data transformations, transcoding, versioning, archiving, and distribution all involve translating data from one form into another useable format.  The glue tools.  Once procedures and logic are put in place, these tasks can be highly automated – freeing up time to (hopefully) create.  That's the end goal, right?  Tell a better story.  Unfortunately, it's not sexy.  Automation, which is a massive component of Asset Management, is not a creation tool, and thus rarely gets the attention it deserves until it's too late…and then it's triage.

Larger facilities have started to adopt asset management, but the automation features inherent to these solutions are rarely exploited. As the companies headcount decreases, the adoption rate for automation is very small.  It's still “asset management by OS”, with little or no automation.

Video bookmarking might not be one of those disruptive technologies but it is something many professionals are working to figure out. What can you tell us about it?

I believe the engine behind the video bookmarking, Revelens to be incredibly disruptive, for several reasons.

Whether it be the one way force feeding advertising model of Television, or the pseudo interactive banner ads or video interstitials with web video, they all rely on the same methodology of disrupting the consumption of the video – the main reason you're there.  That's garbage.  If advertising, or in the case of 5 Things, education, is presented in an easily accessible, yet unobtrusive way, viewers won't hesitate to seek it out.  Let's put the viewer in the drivers seat. Let's also work in tandem with content creators, and not treat advertising or additional content as an afterthought.

In addition, this concept also allows content creators a way to further interact with the media and viewers. It's a proactive, yet reactive vehicle to further engage with your viewers – and a way to engage and grow your community, not just push to an audience.

Let’s jump 5 years into the future. Will we be talking about a 64K workflow that can be done on a station that fits in your pocket? Or will our focus shift to focusing on different methodologies that work with/integrate the technologies and workflows that we’re refining today?

It's getting to be a bit overkill, isn't it?  As of today, higher resolutions just mean more flexibility in Post, and more pixels with which to make pretty pictures.  And while conceptually this is fantastic, it doesn't change the fact we are moving to viewing more content on mobile devices which have resolutions drastically less than 2K, let alone 4K or 64K.  As a data point, 38% of 5 THINGS viewers are on mobile devices!

We're rapidly approaching critical mass in regards to content acquisition resolution vs consumption resolution.  There is going to come a point – either with 8K or 64K – that the race for pixels will no longer translate to a better viewing experience.   Someone has to blink first, and I doubt it will be who should.

While I'd love to imagine a world in 5+ years where the technology in your pocket yields more better pixels – not just more pixels, it's part of our culture to want the next big thing. More pixels satisfies this craving.  Thus, our portable devices will continue to have higher acquisition resolution – even if we can't visually enjoy all of those pixels later.

Methodologies to deal with media after acquisition is becoming increasingly a reactive process.  This won't change with more pixels.  Many camera manufacturers develop CODECs and tell Post, “hey, deal with it”.  Post has to then do the tech stick and move with a moving target…that's not going to change anytime soon.

Expect the acquisition of more pixels (if we're luckily, they'll be better pixels, too) to grow to more devices, and post playing catchup to adapt.