3DR went to NAB 2016 to announce their drone Solo will become more versatile, with the introduction of augmented reality, customizable geo-fencing and other new features that make it smart. Or smarter. And safer. 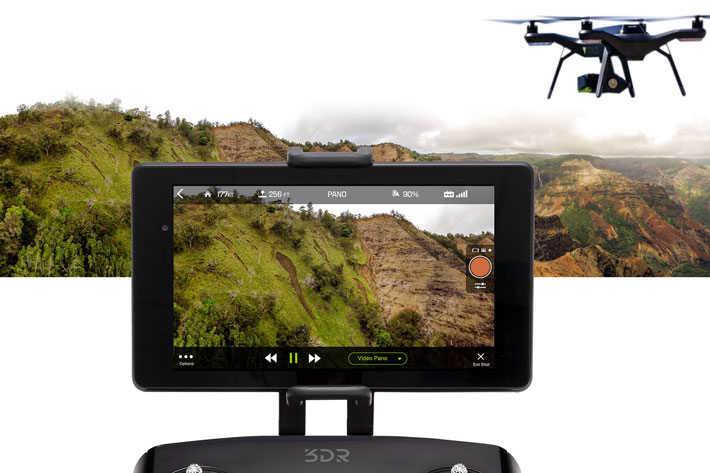 Launched at NAB 2015, the Solo drone, from 3D Robotics, continues to evolve, following what was promised then: a drone that becomes better as time passes, for an easier aerial filming experience and all-around safety during flight.

“We didn’t design Solo as a product, but as a platform — which is industry jargon for ‘ongoing experience,’” said Colin Guinn, CRO of 3DR. “This means that instead of pouring our innovation into a whole new drone to sell you, we keep developing on Solo, so the technology in the drone you have today just gets better as time goes on. Solo has delivered on that promise, a drone that’s evolved ahead of the technology curve and anticipated with what serious pilots and creatives really want in their drone. We’ve always been committed to thoughtfully applying the smartest technology to help you harness your own creativity, so you can easily and quickly create and capture the incredible shots you want. This release extends the experience you can take to the air, and also makes everyone a more engaged and safer pilot.” 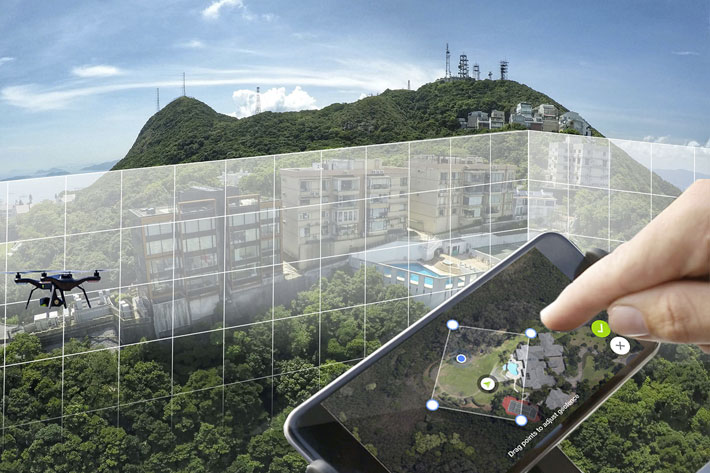 The new features available for the Solo are a good example of that commitment. The new software includes augmented reality, customizable geofencing, automatic flight path rewinding, two new Smart Shots, Pano and Zipline and an updated Follow. It will be compatible with any and every Solo, dramatically multiplying the possibilities for creative storytelling, and making the experience of flight safer and more sophisticated than ever.

In 2016, 3DR has invested in a software approach to scene awareness. According to the information provided, the company evaluated the current state of sense-and-avoid hardware, and, while available and viable to mount on drones like Solo today, it’s still imperfect. As opposed to first-generation on-board hardware that can make pilots overconfident to the point they might overlook their environment, this comprehensive approach does the opposite, raising the user’s awareness of their environment and of what they’re asking the drone to do in that environment. It makes everyone a safer, more informed and more effective pilot. 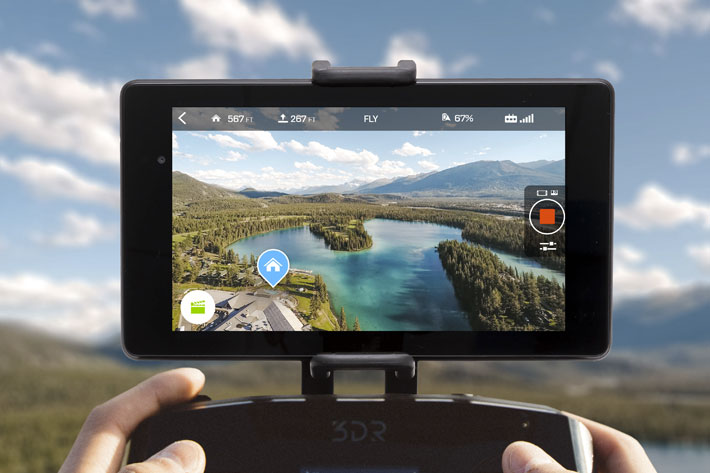 Breakthrough Augmented Reality features enhance the overall flying and Smart Shot experience. The Solo app will overlay visuals in real time on your mobile screen; for example, animating your home point, or your Orbit point of focus. This improves the visualization and execution of creative shots, along with providing another dimension of real-time scene awareness for safer, more informed and more productive flights.

In a time where the number of drones flying raises questions about safety, and news of some incidents suggest the need for more control, probably from the part of users more than legislation – because whoever wants to break the law… will always break it –  the idea of having a “safety net” around your drone sounds interesting. Solo’s new in-app geo-fencing gives users the ability to define a virtual fence around Solo at any time in flight just by drawing on their screen with their fingertip. Users can define this virtual “safety net” for Solo to fly within by setting four points on their satellite view; this will create an area around Solo that the drone can’t leave. Users can do this before taking off or while Solo is in the air, allowing them to easily block off nearby obstacles or entire areas at any time.

The  custom geo-fencing used in Solo is the kind of solution that leaves no excuses to anyone saying “oh, I did not know how to stop the drone”. Everybody can draw a line over a touchscreen! 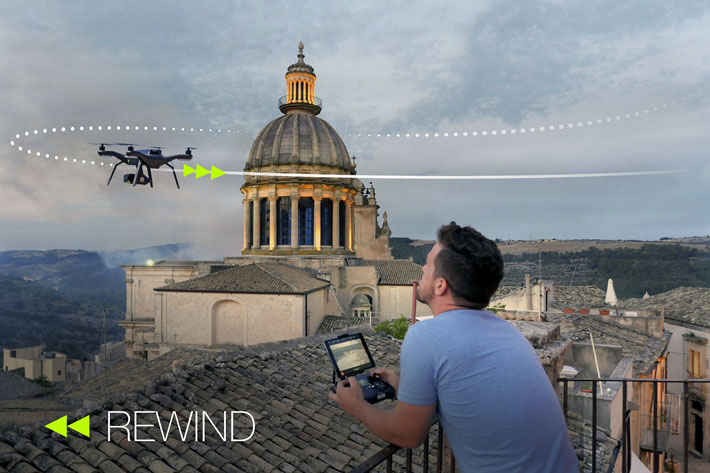 Another new feature of the Solo drone is Rewind. With the press of a button the drone will retrace its exact path for the last 60 feet of your flight (this distance will be user-definable in the app) to ensure it avoids obstacles on its way back home.

One of the characteristics of the Solo is its capacity to execute automatically a series of movements associated with the capture of images. 3DR calls them Smart Shots. Smart Shots are 3DR’s breakthrough computer-assisted cinema technology that enables users to capture the kinds of complex shots that used to require years of practice. Now 3DR introduces two more options: Pano and Zipline.

The new Pano Smart Shot allows users to easily design and capture an aerial panorama. Take time to set up the perfect shot, then Solo automatically pans and snaps the right photos at the right time.

The Zipline Smart Shot allows users to set an infinite ray in any direction the camera is facing, just by pushing a button. They can then fly up and down that line, controlling speed and direction as well as the camera. Quickly fly in any direction to catch fast-moving subjects; or fly at an angle, even straight up, for dynamic shots. Zipline also has a “spot lock” feature for fixing the camera on a point of interest independent from the zipline. Look at something, press spot lock and Solo keeps the camera fixed on the subject while the copter approaches and passes on the zipline, for a dramatic flyby.

In terms of the Follow feature, there are also updates to consider. Follow now offers a “leash” mode, where Solo will always follow from directly behind the subject. This can also be useful for obstacle avoidance; if the subject travels along a path with obstacles on either side (at a reasonable distance), Solo will take the same route. In addition to leash mode, Solo will also account for altitude changes (available on iPhone 6 and above) when following a subject climbing or descending slopes. And those who want to shoot over water will be happy to see the new “boat mode,” which allows Solo to take off from a moving platform.