Parsing the results of the latest survey of who makes how much in our field. 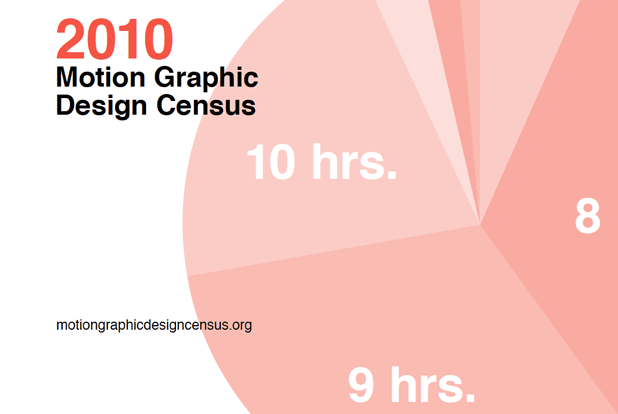 The unofficial, web-based Motion Graphics Design Census for 2010 is now available from their web site. It compiles over 5500 responses – distributed roughly evenly between the US and non-US – into a series of responses about age, software, and – primarily – income. Of course, it’s only a survey of those who responded rather than the industry as a whole. Also, not everyone responded to every question – for example, only 219 self-employed artists offered how much they charged per hour, and most of the charts are based just on US respondents. With those caveats, here’s what stuck out for us:

By comparison, over a decade ago we were told we were underbidding at $100/hour; our day rate was typically $800/day – and $1000 for special circumstances (long day, rush job, film when few others knew how to do it on the desktop). The 90s were indeed the salad days for freelance motion graphics artists; average rates have certainly come down since.

On the other hand, being self-employed has numerous potential tangible and intangible benefits. There is a lot to be said for being your own boss. We also feel that spreading your income potential over several clients – instead of relying just on the fate of one – actually reduces your risk of becoming unemployed. Trish also did some quick back-of-napkin math comparing hourly rates to average salaries, and concluded a self-employed respondent to this survey is only working – or more accurately, being paid for – about 10 days a month, or about half time on average (in that fantasy world where we don’t also work weekends). This leaves a lot more room on the upside if and when the economy picks back up.

That last point was particularly gratifying. We have long preached that it’s good for artists to have a technical understanding of the media they were creating and delivering, so that technical issues don’t get in the way of artistic impulses. It seems that those charged primarily with understanding the technical issues are well-rewarded. Learn some of those skills yourself, and perhaps you can climb to the higher end of the pay scale inside your own chosen specialty.

Anyway, that’s our impressions. And you know the saying: lies, damn lies and statistics. We’d be curious to hear your own thoughts about being staff versus self-employed, the state of the industry, and prospects for the future.